Maybe it was the shiny red F, or Eliot refusing to play Batman and Robin in our underwear, or a brain fever: something made me do it. Before that first math quiz F, my parents had assured me I was perfect…

Maybe it was the shiny red F, or Eliot refusing to play Batman and Robin in our underwear, or a brain fever: something made me do it. Before that first math quiz F, my parents had assured me I was perfect. I sat still, quiet as a dead child, thinly smiling as fake as a storefront, pulling As out of thin air. Perfection was something to be. Ladies in the grocery store never failed to notice my well-behaved manner, teachers thrilled at my eagerness to learn the most trivial of facts, and my parents often referred to my report cards while visiting with less fortunate friends. Even my social life, before Eliot’s refusal to play Batman, had been perfect. Until that day, I was sure grown men wrestled in their underwear after lodge meetings and workdays at the steel mill. Eliot and I had been tumbling for a couple of years and without shame, slobbering over each other’s faces, trying hard to get the Hollywood kiss right. But one day he pushed me away, my Walgreen’s vinyl superhero cape fastened neat around my neck. Stumped, I walked home, cheeks hot and red, my eyes on my feet, perfect posture ruined.

Easter came quick that year, painted eggs and neon cellophane grass. Ma brought us home two gray bunnies from our grandparent’s roadside vegetable stand. I thought their eyes were scary, but my sister was thrilled. I remember being a little scared for them, knowing she had fed her goldfish candy Tic-Tacs the year before. Between her whiner’s cries, she had explained that the bloated fish floating in a bowl of candy-colored water had been hungry.

Dad built the bunnies a ramshackle home out of old plywood and chicken wire in the backyard. I fed them Easter morning, trying to find a way to tell my parents about the folded up quiz I had hid between the green seats of the school bus. I hadn’t been able to take it home, couldn’t take it home, that red F had covered me in loser dust. Hearing my mother screaming, I cracked my knuckles and went back inside the house. My mother was frantically running back and forth down the hallway after my sister, trying to get her into the hated crinoline skirt.

Little missy, you’re gonna wear this damn dress if I have to shove it down that scrawny-ass throat of yours,ä
Mamma said as I tried to sneak past. Our Easter outfits got progressively worse; my father and I in corduroy jackets and matching clip-on polyester bowties, my sister a lavender balloon in a hand-me-down dress. We took the same family picture each year; the fake photo backdrop of a fireplace set up in the living room, my sister’s bony butt plopped down and squirming on my lap, our parents standing behind us with their hands firmly placed upon my shoulders, the photographer trying to make us smile by shoving the feather duster under our noses.

I went to the bathroom to brush my hair for the inevitable pop of the camera’s flashcube. I brushed my hair hard with the brush, hurting my scalp, hating the curls. All the black hair poofing out like snakes on my head, hair every old lady in town cooed over, hair my mother was so proud of. I grabbed the scissors off the sink and cut at those curls, letting the coils fall slow to the sink. I didn’t want to be cute; I wanted straight hair like Robin, hair that could be controlled. Wrapping the pile of shorn hair in toilet paper like a mummy, I hid it beneath the rest of the tissue in the wastebasket. Looking at the new me in the mirror I was surprised at how horrible I looked; short and long patches of hair, hair all over the pale yellow shirt, stray strands stuck to my forehead and cheeks. I had a short-lived moment, thinking it made me look as tough as a new-wave Annie Lennox, but then Ma knocked on the door asking if I was ready. Taking a towel, I tried wiping my itchy face clean. I slowly opened the door and looked up at her, trying to look innocent. She screamed, not at me, but for all those lost curls.

She called my grandparents, telling them all about my haircut, inviting them over early, grounding me, and hiding all the scissors in the house. My grandma tried to be nice, faking excitement, saying it looked like a Vidal Sassoon cut. My mother shot her a heated glance, silently telling her that this was not the proper response to this horror, this mutilation. Raiding the bathroom, she brought out the tissue mummy and opened it up for all to see, those dead thick locks just solemnly lying there. My sister shook her head like a disappointed parent, thoroughly enjoying the moment. By the time coffee was poured and cakes cut, my mother had decided that I would learn a lesson by keeping the ãcancer patientä haircut till it grew out. The curls gone and nothing she could do, the church bell across the field rang out as it did every year, tolling the bunny and fleshy resurrection.

I never told them about the F, although the bus driver finally did, finding my seat stuffed and spilling with my failures in mathematics. I never told them why Eliot stopped coming over to play, although he later got in trouble for playing Star Wars with the mayor’s son.
The rabbits lived a solid month, my father finding them one morning, chocolate smeared across their noses, M&Ms scattered at their feet. Out of respect for the dead, reciting the Pledge of Allegiance, I buried them under the cattails, hoping the hole wasn’t too shallow. 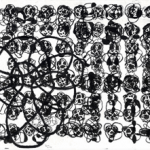 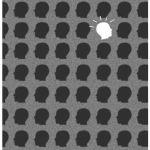 Turn On Your Mind