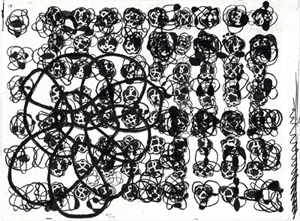 Terry Winters: Painting, Drawings, Prints 1994-2004 was marked by the simultaneity of vision and experience. In his Computation of Chains series (1995-1998), heavy, expressive black lines overlap one another in multiple directions, constructing dense networks of forms that expand the viewer’s reading of architectural renderings, computer graphics, and medical photographs.

I immediately think of the tie between Winters and James Turrell, whose Early Light Works was on display at the Griffin Contemporary in Santa Monica until February 12. The way that Turrell’s aEnzu Blue (1968) gives volume to light using a across-corner projection, Winters’ forms bring to mind optical vistas as seen from behind the lens, thereby depicting the unseen athrough the process of painting itself. Throughout the show, he builds hypothetical places from the alogic of materials. aWhen the image is built correctly, according to Winters in a 1997 interview with Adam Fuss, at he formed elements of the painting reach a point where the picture has dimension.

To recognize the aimprovisational responses of these works, the viewer must both see them as aobjects of contemplation, as well as literal descriptions of looking. This is what happens in the Meshworks series (1999-2002). Every pigment used has a visceral impact. The seemingly arbitrary distribution of color and line is in fact highly methodical. By painting a dark line over a lighter one, Winters develops the visualization of a three-dimensional reflection using abstract representation. This composition places us between ourselves and athe physical data of the image. There is a strong sense of fascination in the recognition that such illusion also holds a sense of realism, because in a world overwhelmed by visual stimulation of every kind, the realm of reality is constantly deferred, as Winters’ figures make clear.

All the elements work together to move the image toward resolution, to lend cohesion between the lines on the surface and our eye’s ability to perceive shape and dimension, as if our perception and reality were on the verge of incommensurability. In this way, Winters’ works resonate beyond the confines of their two-dimensional picture plane, for they highlight a perception that precedes mental awareness, that involves the formation of a visual spectrum in all its dimensions: optical and psychological.

Image courtesy of the Detroit Institute of Arts