Chuck Stebelton started putting down stanzas on paper, and now we here in Chicago are lucky enough to have his spunk, energy, and devotion to poetry bringing us one to two poets a week every Sunday at 7 p.m. by way of the Myopic Poetry Series.

When Chuck Stebelton was in second grade, he wrote his first very first poem, Three Monkeys, and if someone had told him that he would grow up to be a published poet and the organizer of a weekly poetry series, he probably would have stuck out his tongue, screwed up his face, or, heaven forbid, doubled over laughing. But lo and behold, this fine lad grew up, started putting down stanzas on paper, and now we here in Chicago are lucky enough to have his spunk, energy, and devotion to poetry bringing us one to two poets a week every Sunday at 7 p.m. by way of the Myopic Poetry Series. Over the course of one evening, and later, and by email, I was able to pick Chuck’s brain about the Myopic series, who’s reading, who’s listening, and what it’s like to be one of the ringleaders of the growing Chicago poetry scene. Be sure to check out Chuck’s upcoming book called Circulation Flowers from Tougher Disguises press later this year.

Valerie Pell: How long has the Myopic Series been around?

Chuck Stebelton: When I took over curating the series in January 2004, it had been going for twelve years or so, about as long as the bookstore has been around. It’s always been a weekly series, part of the bookstore’s programming that also includes experimental music on Monday nights and a weekly chess night. It was Thax Douglas’s series up until a couple of years ago, and I have a sense that he ran things a little differently. For most of its history, the series has been less of a formalized reading series in the way that I think of a reading series, and more of a weekly social space that Thax created and kept open to a wide community of poets. I imagine that he burned out on keeping that up after a while and Melissa Severin ran it for about a year before I took over, but she went on to other things toward the end of last 2003. The first reading that I attended at Myopic was in the summer of 2003, a reading by Dan Beachy-Quick and Joel Felix. The series was in the basement then, as it was for the first several weeks that I’ve been running it. We’re on the second floor now in a comfy new space after a couple of months of holding readings at the Buddy space a few doors down. 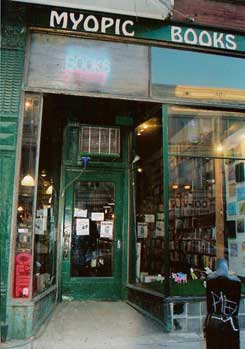 VP: Do you get paid to do this?

CS: Nope. There’s a small stipend, but I try to save it up when I can to help readers with travel expenses or gas money if they come in from out of town. Most weeks I end up spending the money before I leave the bookstore or going out with folks after the reading.

VP: Do the poets get paid to read?

CS: I wish that I could pay readers more often than I’m able to. That usually means paying them out of my own pocket, though. Most times that I’ve been able to invite readers from other cities, it’s when they are already passing through to read in Milwaukee or Iowa City, places like that. Poets local to the area usually don’t have any expectation of being paid, but I’d love to be able to secure some funding to be able to do that one of these days.

VP: How do you choose which poets to invite, and do you ever invite prose writers?

CS: They don’t have to strictly be poets, but I mostly invite poets because that’s who I pay the most attention to. I’ve also had a few fiction readings by local fiction writers, and a couple of folks who work mostly in hybrid forms. The first several months that I put together was comprised of poets whose work I was already familiar with, but had never had a chance to hear them read. In the months that I’ve been organizing the series, I’ve grown familiar with a lot of writers whose work I never would have come across before, and a few of those readers have been people who contacted me and sent work. Some are referred by friends, and several others are writers I’ve met socially since the Danny’s series started up about three years ago and got certain camps of Chicago poets talking to one another. Many more have been writers whose work I know from the journals, magazines, and small presses that I pay attention to. 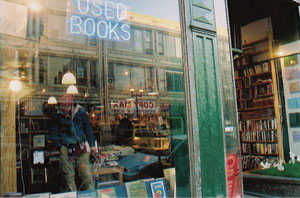 VP: Before the Danny’s series started up, had the Chicago poets stopped mingling for some reason?

CS: They hadn’t stopped mingling, but Chicago’s poetry scene was much more atomized a few years ago. Also, there was just less occasion for meeting one another and the Danny’s really a long way towards changing that.

VP: What journals, magazines, and small presses do you pay attention to?

CS: Where to start?! There are dozens and dozens. Some of them that are more local to this region include Antennae, Conundrum, LVNG, Milk Magazine, Chicago Review, Moria, Gam, Traverse, Crayon, Spoon River, and Near South. I invited P. F. Potvin after first seeing his work in Sentence, a journal of prose poetics out of Dallas, which several other readers in the series have been a part of. Many of them have also appeared in Bird Dog out of Seattle, Magazine Cypress out of Cincinnati, and Jubilat out of Amherst. As far as great presses that are more local, there’s Flood Editions which is based in Chicago and St. Louis, and Bronze Skull out of Milwaukee, to name just a couple. Print culture is really alive these days, and it seems that more and more people are getting really involved in it. Poetry magazine, of all people, just sponsored an event at the Hot House intended to highlight several of the local small presses and weeklies, and the place was mobbed.

VP: How do you go about inviting the poets you’d like to read?

CS: I spend a whole lot of time e-mailing! Sometimes people write to ask about reading at Myopic and send work. With some others, I’ve gotten to know them socially or through correspondence and the invitation arises out of an ongoing conversation.

VP: Can you name your favorite three poets that have read at Myopic?

CS: No way. But if I had to say which were the three most successful readings so far in terms of audience and their response, Gabriel Gudding’s reading with John Beer would be near the top of the list. Also, one night I had three Milwaukee poets, Stacy Szymaszek and Lisa Samuels and Bob Harrisonn, read with three Chicago poets, Jesse Seldess and Kerri Sonnenberg and Bill Fuller, to great success. Daniel Borzutzky’s reading with Terri Kapsalis and Philip Jenks was super stellar.

VP: Why do these readings stand out in your mind as being successful? Is it mainly about how many people there are that show up to the reading, or is it something different?

CS: It’s something different. You can have a really great reading with only six people in the audience; in fact, I’m often much more comfortable with that. Much of the work that I’m drawn to requires some pretty close listening, so intimate can sometimes be better. Murat Nemet-Nejat’s visit here to read with Peter O’Leary didn’t draw that many people, but the experience of hearing their work in combination was a very powerful one. I put a lot of thought into who I’d like to hear read with whom. And there are also readings that stand out as successful simply because it was such a blast to be in the room that night, like with Adam Levin’s recent raucous fiction reading. It was better than the movies.

VP: What kinds of challenges have you run into while in charge?

CS: The biggest challenge so far was keeping the readings going in a series of temporary spaces last summer while the bookstore was being rehabbed. Also, I started out with the intention of giving these great introductions to each reader’s work every week, but that idea went out the window pretty much right away, due to time constraints.

VP: Where do you advertise the reading?

CS: The Reader has a wonderful section called Readings & Lectures that lists each week’s reading and occasionally gives some extra press to a particular Sunday. Time Out Chicago runs a pretty thorough listing, too. There are also several great online events calendars and blogs, such as Golden Rule Jones, Gaper’s Block, C.J. Laity’s ChicagoPo-etry.com, Ray Bianchi’s monster resource Chicagopostmodernpo-etry.com, and Greg Gillam’s Kulture Kalendar at Fengi.com. I also send out a monthly announcement through ChicagoLit.org and to my own email list. And the series has its own site at www.myopicbook-store.com/poetry.html that lists each event and info about the readers. I do a little bit of flyering most months, and also rely a bit on word of mouth.

VP: How many people usually attend?

CS: I’ve had as few as five or six people show up, but usually see more like fifteen or twenty. Fifteen is probably the average. There were sixty or seventy for the Crayon #4 reading. Fortunately, that was while we were at Buddy and could accommodate everyone.

VP: Who’s usually in the audience?

CS: There are a few new faces each week. But there’s also a core of people that support my and other series around town like the Danny’s, Discrete Series, Chicago Poetry Project, and some of the open mikes. I usually see a few of the same core of people at least a couple times a month.

VP: Has anything crazy ever happened at one of the readings?

CS: Nothing so weird that it didn’t work out. One night a performer managed to channel Spalding Gray and Andy Kaufman with a rousing Vaselines cover. Nothing too crazy, though.

CS: The best part is being exposed to new work that I wouldn’t have heard about if I wasn’t involved in the series. I like that it’s in a bookstore. Also, there’s a warm social aspect to many of the readings that I really look forward to each week.

CS: I wish I had more time to give to promoting the series and especially tasks like grant writing. It would also be great to have more time to give to some ideas I have for publishing projects around the series like chapbooks, broadsides, recordings. I’d love to bring in some help with such projects, a volunteer or something collaborative. If anybody’s interested in talking about that or offering some expertise, I’m at eyeple@earthlink.net and would love to hear from them. 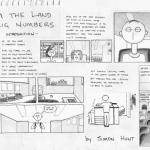 From the Land of big numbers