Forget Hot Girl Summer, with “What We Do in the Shadows,” “First Kill,” and “Dracula Daily” to entertain us, it’s time to celebrate Gay Vamp Summer. 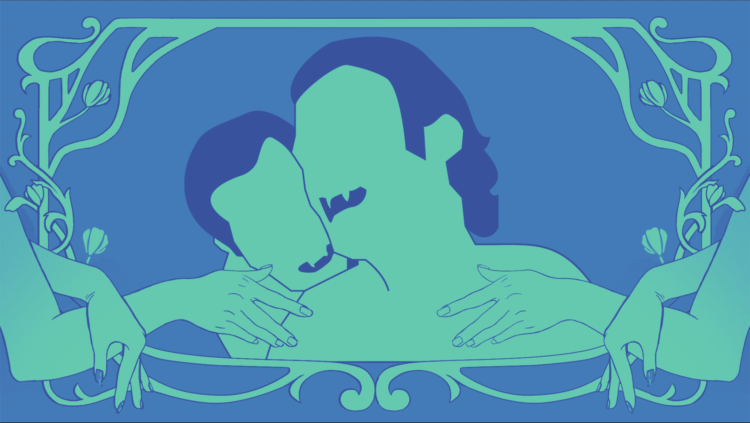 Summer blockbusters can wait. There’s vampires to discuss. May, June, and July each feature their own unique vampires this summer, and I, for one, am obsessed. May gave us a reframing of a vampiric classic. June presents a lesbian retelling of  a vampire-hunter Romeo and vampire Juliet. And finally, July, perhaps most exciting of all, saw the return of a fang-filled TV show turned romantic comedy.

From Dracula to Twilight, vampires have been a fascination for centuries. They’re immortal, blood-sucking monsters whose stories we can’t help but love (or love to hate). There’s an allure to vampires that zombies or werewolves can’t live up to. Vampires have such range. Sometimes they are a reflection on history, time, and the nature of humanity. Other times they are just a romantic lead to kiss or a villain to kill. Every vampire story shifts the lore a little bit, as well as their role in the narrative.

So, what do these stories have to say about the vampires they feature? And why should you love them?

The Love for “Dracula Daily”

Who would have thought that all you needed to do to get a whole generation of teenagers to read a 125-year-old novel was to email them? Forget reboots or revivals, “Dracula Daily,” run by web-designer Matt Kirkland, found a new way to modernize classic lit.

Bram Stoker’s original “Dracula” was written in an epistolary format composed of fictitious letters, news clippings, diary pages, and telegrams. The events of the story take place between May 3rd and November 10th. Those who sign up to be part of “Dracula Daily” get emails in their inbox every day that an event of the novel occurs. Thus, “Dracula Daily” allows readers to experience the story in real time, giving readers a new way to immerse themself further in the ethos of Bram Stoker’s world.

This is the second year of “Dracula Daily,” but last year only around 1,600 people joined the newsletter. But this year, over 200,000 people are reading “Dracula” this way. So, sign up now to understand all the memes overtaking your Tumblr and Twitter feeds.

Before we discuss the next two entries on the list of this queer vampire summer, there’s something very important you must learn about vampires.

Simply put, vampires are gay. Or at the very least, homoerotic. The original 1918 short story that really brought the vampire into pop culture, “The Vampyre” was a story of sexual danger and liberation. “Dracula” is also a story with themes of sexual danger.

And stories of sexual liberation quickly become queer stories. Some vampires pull on the aesthetics of the queer culture of the time such as “The Lost Boys” in the 80s. Others, like TV show “True Blood,” let side characters be (often a stereotyped verison of) gay, while simultaneously claiming their vampires are “coming out of the coffin.” There are the cult classic erotic and openly gay vampires of Poppy Z. Brite’s novels. There’s the subtext to the vampires within “Buffy.” Even “Twilight” was a lesbian awakening for many young girls. And then of course, we have the oh-so-important “Interview with a Vampire,” a tragic homeotic love story that author Anne Rice says has a “gay sensibility.” The film adaptation of “Interview with a Vamprire,” of course, is toned down just enough from its novel counterpart to be more accessible to a straight audience.

Look at any vampire movie, show, or book, and I assure you that you will find some queerness. But it is rare to find queerness on the big or small screen that is openly discussed and is not just a stereotype.

For years we’ve had soapy vampire dramas, comedies, and tragedies that dance around queerness. This summer gave us a gift:

The Fated Lovers of “First Kill”

If “Heartstopper” is the good queer representation we all wish we had growing up, “First Kill” is it’s campy, supernatual-tee counterpart. “First Kill” is part of a genre that’s made to be cheesy and dramatic. And as the theme song proclaims, socially awkward vampire Juliette (Sarah Catherine Hook) and badass vampire hunter Cal (Imani Lewis) have a love deeper than Edward and Bella’s.

“First Kill” skips past the usual coming out narratives queer characters are given and instead jumps right into the complicated love of Juliette and Cal alongside the hate they have been taught to have for each other. The show is a modern Romeo and Juliet, but instead of Montague and Capulets, we have vampires and their hunters.

The filming and lighting design along with the music is flashy and stylized. The acting  and dialogue is campy. The CGI is low-budget. And yet the love-hate relationship dynamics are profound. As the show unfolds, the audience gets to see both the love of Juliette’s and Cal’s families and the violence they are capable of.

This queer, interracial, interspecies love story is exactly what we all needed this June. Season 2 has yet to be confirmed for renewal, but anyone looking for a fun teen romance to watch should absolutely check this title out.

The Romantic Comedy within “What We Do In the Shadows”

If you haven’t already gotten into “What We Do In the Shadows,” now is the time to. Originally a movie of the same name, now a Hulu series, this Taika Waititi and Jermaine Clement project may be the best modern take on vampires in the last decade. It takes the mockumentary-style format used in shows like “The Office” and “Parks and Recreation,” and marries it to the average lives of vampire roommates (and their human familiar/bodyguard). The result is a hilarious, absurd and somehow still touching show.

Pretty much every vampire in this universe is somewhere on the queer specturm, including a polyamrous, pansexual married couple who have been together for hundreds of years. But the last season made it overwhelmingly clear that there is a romantic comedy brewing within the narrative. Break-out star Harvey Guillén helped turn the side character, Guillermo de la Cruz, from a befuddled familiar into the series’ lead, and a potential romantic interest for his vampiric master, Nandor the Relentless (Kayvan Novak).

The third season ended on a major cliffhanger, leaving audiences and the in-universe characters questioning where the relationship between Guillermo and Nandor will go. So if you have already finished “First Kill” and are caught up on your “Dracula Daily” emails, it’s time to start binging “What We Do in the Shadows” and get ready for the July 15th release date.

Sidne K. Gard (BFAW 2025) is a queer writer and artist from New Orleans. They focus on identity based storytelling intersecting with pop culture. Currently, they are an F News Staff Writer and the host of The Eyeridium Podcast.

Dracula daily, first kill, loving the monster, queer vampires, vampires, what we do in the shadows

Entertainment, Featured Loving the Monster: Out of the Coffin and Out of the Closet
« Previous Story