Ghosts in the Machine: Archiving the End of the World with “Gemini Home Entertainment”

The revolution will not be televised — but the end of the world will be, if “Gemini Home Entertainment” has anything to say about it. 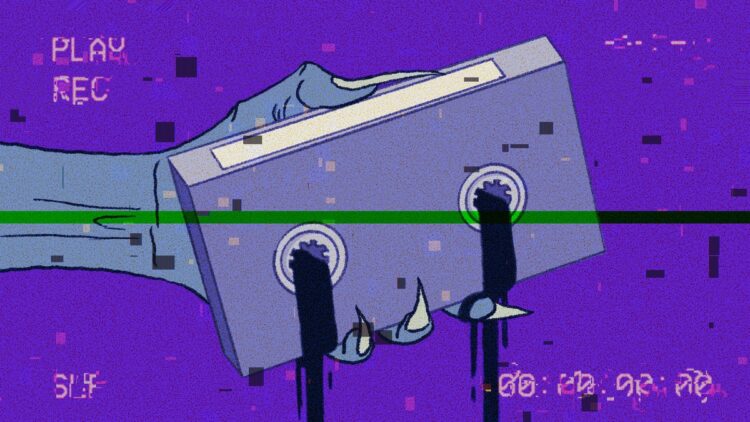 “Ghosts in the Machine” is a column by F Newsmagazine’s Entertainment Editor, Nestor Kok. Here we will take a deep dive into the past, present, and future of analog horror, spotlighting the creators who bring our worst nightmares to life, and unraveling just what makes analog horror’s unique brand of storytelling tick.

“This is the way the world ends … not with a bang, but a whimper.”

The idea of the anthology format as a viable method of creating horror content took hold over the past few decades with the rise of FX’s “American Horror Story.” But to compare “Gemini Home Entertainment” to “American Horror Story” would do the former a disservice. “Gemini” does away with any and all shlock, gore, and jumpscares. Instead, it opts to instill terror in its viewers through a growing sense of unease and anxiety, and later on, the terrible realization that the world we have been given a window into is ending, and there is nothing we can do to save it — or ourselves.

“Gemini Home Entertainment” takes its name from the eponymous VHS content distribution service that “releases” each of its episodes. As with most anthology series, the episodes we see at first feel like they have no real link, and their scares feel individually contained. We are told, in pleasant, educational overtones, about the world’s weirdest animals — who, by some coincidence both gruesome and hilarious, appear to reside exclusively in Minnesota; about the dawn of artificial intelligence, and the planets in our solar system. Of course, in true analog horror fashion, none of these things are what they seem. The world’s weirdest animal turns out to be a terrifying, parasitic creature known as the “woodcrawler.” Artificial intelligence has been corrupted by the influence of an alien being known only as “The Iris.” Oh, and the entire planet of Neptune has gone missing.

Besides educational videos, “Gemini Home Entertainment” also deals in commercials both eerie and intriguing. Cheery commercials for the quaint, picturesque Moonlight Acres summer camp mask a terrible truth, involving infection, cults, and ritual sacrifice. And then there is, of course, the winding depths of the “Lethal Omen” video game — a fictional commercial for a video game that was later made real and playable by developer Alpine Arts, whose multiple endings hold the key to unlocking a large part of the central mystery of the alternate reality that “Gemini Home Entertainment” has so painstakingly created.

Each of these windows into the world of “Gemini Home Entertainment” is vastly unique, but they all share a common thread — they serve as documentation for the slow decline of human civilization, and as testament to mankind’s eerie ignorance to their own impending extinction. The revolution will not be televised — but the end of the world will be, if “Gemini Home Entertainment” has anything to say about it. To hear Remy Abode’s own thoughts on documenting our eldritch anthropocene age, F Newsmagazine interviewed them via email.

What drew you to start creating analog horror?

For the technical aspect, I think the format of analog horror is very “newbie”-friendly, in that you can create an entire short film without recording a single video or snapping a single photo. It also helps me disguise choppy VFX shots underneath a layer of static.

What inspired “Gemini Home Entertainment?” What other media do you draw inspiration from generally?

The storyline in “Gemini” is heavily based around its creatures, which were mainly inspired by classic internet creepypastas surrounding Skinwalkers or the Wendigo. The idea was basically, “What if I took this legendary supernatural creature and put a biological spin on it?” and the storyline built itself around that concept. I was also inspired by classics like “The Thing” and “Alien.” In terms of recent inspirations, the Moonlight Acres storyline was inspired quite a lot by two relatively unknown films, “The Ritual” and “The Endless,” the former of which was a huge inspiration for the cultish aspects of the camp.

“Gemini Home Entertainment” really nails the grainy ‘90s aesthetic of educational home video tapes — an aesthetic that is very definitive of the “low-budget,” old-style feel of the analog horror genre. What hardware and/or software do you use to achieve these effects?

I use the free software Hitfilm Express for the editing, compositing and VHS effects, FL Studio for sound design and some musical cues, and the drawing software Sketchbook to draw the monsters. The VHS effects in particular are a wildly messy and complicated mix of effects that I hope to explain in a tutorial some day. I also occasionally get help for 3D modeling from my good friend Swift Animations.

A lot of the content in “Gemini Home Entertainment” is rooted in viewers reading text on-screen. However, this is where it is also most effective at creating terror — when the footage viewers see has clearly been created, it is to show us a world in which the subtle things are the most terrifying, like woodcrawlers moving through a room without walking, or the “hungry eye” at the bottom of the Marianas Trench. Could you elaborate on how you choose to strike this balance between footage you create yourself and footage you repurpose? Which method is more time-consuming, and is this a balance you like, or are you looking to change things in the future?

In older videos I would mostly download stock footage from free sites like Pexels, but as I got a firmer grasp on what it was I was making, I began setting the videos in locations that I could feasibly get my own footage for, which sort of phased out the need for stock footage. This is definitely more time consuming, but it gives me far more creative control over what is shown in the video.

Unlike most other analog horror series, “Gemini Home Entertainment” does not rely on jumpscares at all; building suspense and terror through ambiguity and mystery. Is this incidental to the mostly text-based nature of the series, or was this a trope you were purposely trying to avoid?

I definitely try to avoid using jumpscares whenever I can. I do believe that they have their place in horror, but I think it’s far less effective than just letting the scares sit with you silently, refusing to provide the climactic release that a jumpscare brings. The tension that comes from waiting for a bomb to go off is far scarier than the explosion.

The anthology format of “Gemini Home Entertainment” lends itself wonderfully to keeping viewers guessing about the real story and timeline of events in the series, which they do in droves in the comments section. Do you read your comments? Has anyone come close to deciphering the narrative clues you’ve left us?

I try to read every comment I get, though during the influx of comments that comes with a new video I almost certainly miss quite a few. I’ve seen some very far off theories in the comments, but also some shockingly accurate theories, ranging from commenters figuring out the life cycle of the Woodcrawlers to predicting new videos while I’m still editing them. It’s very fun to read people’s opinions on the series and incredibly encouraging to hear how excited some people get over my stuff.

“Gemini Home Entertainment” is also notable for having an excellent lo-fi soundtrack. Do you create the music yourself? If not, how do you source your background tracks?

Almost all of the tracks in “Gemini” are sourced from old albums created in the 80s/90s, with a couple of exceptions. Finding the right track to use for a video is easily one of the most annoying parts of video production, since I usually end up digging for well over an hour through YouTube playlist after YouTube playlist for a fitting song.

Analog horror, and YouTube content in general, tends to be self-funded or fan-funded — “Gemini Home Entertainment” has a Patreon where fans can help support the series, and a merch line on Creator Spring. Do you find this model of funding sustainable, or are there other ways to support your series that could be better?

“Gemini” has always been a hobby for me, so I don’t expect it to provide me with a sustainable income. However, the merch sales and Patreon subscribers have been incredibly helpful as I save up to go to college. I can’t express enough how thankful I am for the support.

If given the chance to obtain a big budget for your content, would you take it? If so, what would you change? If not, why?

Absolutely, I would take it. I have a million ideas for concepts within the “Gemini” universe that are just unobtainable with my budget. “Christmas Eve Party,” for instance, was a little too ambitious for what I was capable of. The fact that the “monster” is just drawings animated on a screen is probably most obvious in this video, and the illusion of a busy, lively Christmas party is instantly shattered when you realize that a human being never appears on screen in the video. “Advanced Mining Vehicle” is another good example, where the video cuts to static the second the vehicle starts moving since I didn’t have access to a real cave for recording.

Is content and narrative creation a full-time job for you, or do you have another occupation? Do you ever see yourself creating analog horror and/or other original video content full-time?

I don’t expect to create horror content as a full-time career, and with the nature of the subject matter, I’m not sure I would want to. I’ve been making music on the side for the past couple of years, so I wouldn’t mind doing something in that business.

What are your future plans and hopes for “Gemini Home Entertainment,” and for content creation in general? Do you have any other projects coming up that we can look forward to?

I’m currently running a sort of “interlude” on the Gemini channel where I’ve been focusing on shorter, secret episodes that don’t follow the main video format, instead focusing on exploring or explaining confusing or misunderstood aspects of the “Gemini” universe. In terms of other projects, “Gemini” has been eating up most of my time but I plan on eventually branching out to other horror videos not related to the main series. I was working on a side project during the holiday season that I ended up putting on hiatus. I’d love to revisit that eventually.

You can watch all existing episodes of “Gemini Home Entertainment,” including its spin-off series, “LIBRARY,” on the series’ dedicated YouTube channel.

Tune in on Mar. 10 for the next installment of “Ghosts in the Machine,” or check out our previous interviews with Alex Kister, Alex Casanas, and Turkey Lenin III.

Entertainment, Featured Ghosts in the Machine: Archiving the End of the World with “Gemini Home Entertainment”
« Previous Story

Loving the Monster: The Mums, Monsters, and Magic of...