Myle Yan Tay takes us through the highs and lows of 2022’s blockbuster film release schedule. 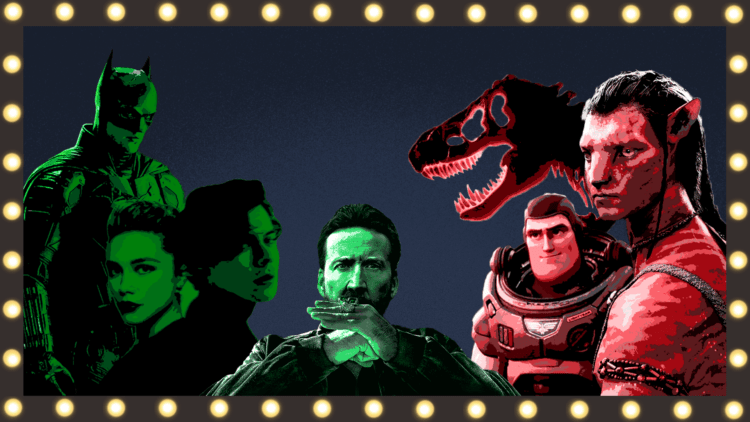 New year, new movies! But what does “new” mean anymore? Most of the releases of 2022 are reboots, relaunches, prequels, adaptations, existing material re-packaged into slightly shinier boxes.

I’ve been scouring the calendar to find movies that I want to see this year. For every movie I find that has me giddy, I also find another that makes me want to cancel my AMC A-List membership, retreat into my hovel, and rewatch “Paddington 2.” I’m overly dramatic about movies, yes, but that’s only because I have an unhealthy relationship with them! A great one can make my week and a bad one will sear itself onto my brain for the rest of my life. (I will never forget, nor forgive, “Free Guy.”) So, in the spirit of that, for every movie I’m looking forward to, I’ve included another that I believe rings the death knell of the movie industry. Thankfully (or maybe not), there’s plenty of both to go around.

Ah, just what we need — another grimdark depiction of Batman. Cue the conversations about why Batman doesn’t put money into transformative justice movements instead, why Bruce Wayne ignores the systemic conditions that force people into crime in Gotham City, and why Batman doesn’t kill, but also doesn’t mind maiming a person once in a while either.

I say this, yet I’m very much looking forward to Matt Reeves’ take on the caped crusader. We’ve got Robert Pattinson, indie darling, hopefully just continuing his unhinged performance from the Safdie Brothers’ “Good Time,” Colin Farrell doing his best New York accent, Paul Dano playing a creep (so, just like every other role he’s played), and Zoe Kravitz as Catwoman, just to really ensure that this movie leaves every single viewer with a bisexual awakening and/or crisis.

Matt Reeves also directed what I consider to be one of the great trilogies of the 21st century — the Planet of the Apes reboot, which despite ostensibly being about monkeys getting smart, ended up being a layered epic about freedom, oppression, and revenge. If this man can make apes on horses both serious and compelling, I trust him to do something worthwhile with the leather-clad billionaire in a batsuit.

Speaking of bats, “Morbius” is also being released in cinemas.

It is incredibly important to note that “Morbius” was meant to be released in February, and has now been pushed to April 1st, cementing the idea that this movie is really just an elaborate prank. I am convinced this movie is just Jared Leto punishing us for not allowing him to make a Joker movie. I have seen the trailer four times, and all I can tell you about it is that there’s… cancer? Bats? He can fly? Is he good? Is he bad? Tyrese Gibson is in it? All I can hope for is that the end of the movie teases Dakota Johnson’s “Madame Web” movie, a character I only know as an octogenarian woman who sits in a chair made of webs in the 90’s Spider-Man cartoon. Now that, I want to see.

We know nothing about this movie, other than that it stars Daniel Kaluuya and Steven Yeun and is written and directed by Jordan Peele. Peele’s streak of releasing excellent movies under Monkeypaw Productions was broken by the disappointing “Candyman,” a film marred by a lacklustre script. But I will still be in cinemas on release day for “Nope,” because I’ll watch anything with Daniel Kaluuya in it. In fact, most of the movies I’m excited to watch on this list are determined by their cast. And most of the movies I’m not jazzed for involve franchises. But what is casting if not a form of franchising in itself — only, a franchising of the human body instead?

Wait, let’s not dwell on that! We’ve got a list to finish!

My transformation from film critic into film cynic started with one movie — “Jurassic World.” When Bryce Dallas Howard ran from a T-Rex in her heels? Ugh. When the secretary gets ripped apart by three different dinosaurs ostensibly because she was trying to take care of two bratty kids? No thank you. When Bryce Dallas Howard and Chris Pratt kiss without any chemistry or even the slightest bits of romantic tension? I boo-ed.

This time, though, the original cast are all coming back. Because apparently, that’s the marker of what makes a good movie now — whether you can dangle a big enough paycheck in front of a franchise’s original cast to get them to grace your new movie with some screentime. The worst part is that I can’t even be that mad, when the other option is using a deepfake and AI tech to recreate an actor’s performance from thirty years ago.

Many years ago, Collegehumor did a sketch about what it would be like to be Nicolas Cage’s agent. In the sketch, the agent becomes increasingly manic, with Nic Cage saying yes to every role. This was in 2010. Since then, Nicolas Cage has been in forty-three movies. FORTY-THREE! He’s voiced Superman, Spider-Man Noir, been stuck in an off-brand Five Nights at Freddy’s, faced off against eldritch horrors twice in “Mandy” and “Colour Out of Space,” and played a vengeful man many, many times. The only role he hasn’t played? Nicolas Cage.

In “The Unbearable Weight of Massive Talent,” Nicolas Cage plays himself, hired as a celebrity guest at a billionaire’s party, who wants him to perform various roles from throughout his career. Shenanigans ensue. I don’t really need to know much else to say, count me in.

I spent too much time and energy trying to figure out what the heck “Lightyear” is even supposed to be. As far as I understand, it’s a prequel to the real story of the fictional person Buzz Lightyear, who is the character the toy Buzz Lightyear is based on in the “Toy Story” universe. I despise this sentence, and by extension, this movie.

“Booksmart” was one of my favourite movies from 2019. It was clever, incisive, laugh-out-loud funny, subversive, and feel-good. Now, its director and screenwriter, Olivia Wilde and Katie Silberman are reuniting for “Don’t Worry, Darling,” a 1950’s period piece about a married couple living in a utopian experimental community. Sounds a little less high school hijinks and a little more “Stepford Wives,” but wait… with a cast of Florence Pugh, Harry Styles, and Olivia Wilde herself? We’ve got another must-watch bisexual crisis on this list.

Have you ever found yourself wondering in the years since 2009 what Sam Worthington is up to? Whether the Na’Vi developed ponytail condoms so they can practice safe sex? Whether James Cameron came up with a better name than “Unobtanium” to describe a metal that was difficult to obtain? Well then, boy oh boy, do I have good news for you. After 13 long years, “Avatar” fans (no, not that “Avatar,” the other one) will finally have their thirst quenched. James Cameron is going back to Pandora, and wouldn’t you know it, the crew is back together at last. Neytiri? Miles Quaritch? Parker Selfridge? Dr Grace Augustine? Bill Spalding? And who could forget that classic character, Corporal Lyle Wainfleet? (I made one of these up.) The gang’s all back, and if James Cameron has his way, they’ll keep going until “Avatar 5” with a tentative release date of 2028. Fingers crossed our planet will last long enough.

I will say, though… for all my snark and pessimism, I do hope all these movies are good. Movies, like any art form, take time, energy, and passion. Those are in short supply nowadays. So I would love for all these movies to be good — to live up to, or even defy, my expectations — and for every person involved to be rewarded for their creative endeavours. Yes, even the ones involved in “Morbius.”

Ghosts in the Machine: Archiving the End of the...

A Love Letter to Girl Games of the 2000s