Mackenna Hanson discusses the impact that Nikocado Avocado’s Youtube career has had on his life, and the separation of work and real life. 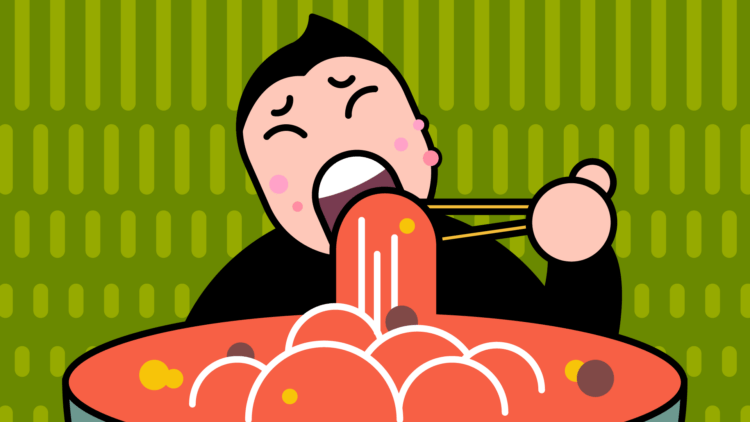 Nikocado Avocado. A name you’ve no doubt heard at one point, generally in the same tone as one might describe a particularly unpleasant co-worker or acquaintance. Nikocado Avocado is a YouTuber — real name Nicholas Perry — who is known for making mukbang videos in which he eats vast quantities of (usually fast) food and chats about his life and thoughts with the viewer. His oldest surviving videos on YouTube are from 2016, although he first registered an account in 2014. He got his start by moving away from vegetarianism, believing it was detrimental to his mental health, and heading towards a more open diet. Over the next three years, he gained popularity due to his easygoing demeanor and especially his “Fire Noodle Challenge” videos. Currently, his main YouTube channel, Nikocado Avocado, has over two million subscribers, and he regularly surpasses a million views per video.

For clarity, ‘mukbang’ is a video genre that originated in South Korea, which involves the video’s subject eating large amounts of food while streaming and interacting with the audience. It grew out of a desire to eat with someone even if you were alone; by watching a mukbang video while you eat, you can feel like you’re with friends. Nikocado, however, flipped that script entirely on its head.

Instead of engaging in normal conversation in his videos, Nikocado is prone to crying, screaming, yelling, and generally being overdramatic. In 2019 and 2020, he also got into various controversies revealing abusive behavior behind-the-scenes during collaboration videos. Specifically, he was called out by Stephanie Soo and Zach Choi. Soo is a popular YouTuber with over two million subscribers who discusses true crime and scary stories while eating her mukbangs. Choi is an astronomically popular ASMR mukbang content creator, with over 13 million followers. Soo called out Nikocado in a video entitled “Why I Am Scared of Nikocado Avocado” and Choi in a series of now-deleted tweets.

It’s what Nikocado is known for nowadays—poor behavior and controversial tea-spilling. As discussed earlier, he didn’t always behave like that in his videos, and recently, Nikocado has even put out a video blaming his audience for his personality shift. Unfortunately, he’s since deleted it. However, he has a history of blaming his audience for his actions, and today I’m going to review one such video (“I’m Back…Disabled McDonald’s”) as well as go over various commentator’s reactions to Nikocado. (Note: “I’m Back…Disabled McDonald’s” was uploaded on his side channel, More Nikocado, which currently has a subscriber count of 924K.)

The first thing I noticed is that he wore a shirt proclaiming ‘It’s Your Fault!’—so clearly, he’s profiting off the negative press. It doesn’t get much more blatant than advertising your own merchandise with your own infamous quote on it in your own video. Secondly, after first singing the word “hello” a few times, he jumped right into saying “it’s your fault.” These actions set the tone for the rest of the video. And of course, he had a gargantuan feast of McDonald’s food laid out on his hotel bed. Nikocado also has a tendency to break into song, which seems to bolster his false, easygoing persona, which is belied by his passive-aggressive words — he says “It’s your fault” four times in the video.

There was a point in the video where he got real. At least, he believed what he was saying, and I’d be hard-pressed to prove him wrong, considering his life experiences proved him right. A fan asked him why he didn’t play the violin — a hobby Nikocado has notably shown off in his videos a few times — for money instead of eating. His response?

“They want you to do all these great things but they don’t want to support you. Or pay for it. You know, for a year, when I first started my Patreon … I had violin after violin after violin after vio — do you know how many people signed up for the violin tier? Like, twelve people. These people are liars! They don’t put their money where their mouth is. ‘Oh, you’re so talented, I would love to see it — yet you won’t pay ten bucks to watch me perform? Ten dollars! And then they shame me for eating.”

Now, this is a rather bitter and pessimistic outlook on life. And he followed up this pronouncement with more bitter, self-aggrandizing words. But it showed me a side to Nikocado I hadn’t considered — that instead of being locked in a blind rage and blaming his fans for his problems, he was very calculatedly stirring up drama and controversies for the views and the subsequent cash. Adding insult to injury, he also said, “It’s your fault! Buy my merch!” After all, on YouTube, any attention is good attention. And to top it all off, he doesn’t seem to realize that there are other ways to make money that aren’t busking in the streets or eating yourself to death on social media.

Overall, however? The video was shockingly boring. It stayed true to the mukbang formula; all he did was eat and discuss the food and his life for about an hour. To his credit, there was a section around the 23 minute mark where he called out the behavior of Karens and showed the basic humanity most of us possess — an unexpected positive note in an otherwise unremarkable video.

Following the viewing of “I’m Back…Disabled McDonald’s”, I watched a commentary video on Nikocado from the YouTuber Tea Spill, who has a massive follower count of 1.71 million and makes videos discussing the latest YouTube drama. It’s important to realize just how many YouTubers have commented on this behavior and noticed that he is eating himself to death. Nikocado has had plenty of opportunities to listen to the advice of others, including YouTubers such as The Right Opinion and penguinz0. As Tea Spill says, “Nick’s channel is a classic example of a YouTuber that pushes boundaries and continuously tries to make his videos more extreme and more shocking with every upload.” Tea Spill accurately points out Nikocado’s tendency for clickbaity, extreme videos and thumbnails, much in the vein of other shock-value YouTubers like the Paul brothers and David Dobrik.. “He’s sacrificing his health, his relationships, and his mental wellbeing for views, clicks, and money.” As discussed earlier in the article, this is also an accurate statement. Nikocado himself has said that he eats for the money.

The real meat of Tea Spill’s video, however, lie in a more recent Nikocado controversy. He broke his ribs, and now suffers from sleep apnea, due to his extremely unhealthy long-term eating habits. However, rather than seeking actual medical help, he’s taking advantage of this by uploading multiple videos with offensive thumbnails, such as “My New Diet As A Disabled Person,” and profiting off the image of disability in a rude, obnoxious way. Beyond that, Tea Spill discusses how his viewers have become concerned for him, noticing that his dramatic YouTube act might not be an act anymore. Tea Spill finishes off the video by saying Nikocado has a lot to offer the Internet (referencing his older, high-quality commentary videos), and wishing that he would realize that he didn’t need to be self-destructive to be entertaining.Taking both of these videos together, I think Nikocado needs to realize that he has the capacity to be entertaining as he is. He doesn’t need to stir up drama, be rude, and be unhealthy just for clicks and money. So many YouTubers gain large follower counts through other things like commentary or comedy, such as Kurtis Conner, D’angelo Wallace, and many others. To quote Nikocado, “I work my butt off making you entertainment every day whether you like it or not.” However, he doesn’t have to work his butt off making this kind of content — I think it’s clear it’s not what he had in mind for his YouTube channel back when he started in 2016. I hope that he has this wake-up call before it’s too late.

Celebrating Thirty Years of Lumpen, a Hub of Chicago...

Renegotiating with the Big Screen: Cinema in the Post-COVID...