Celebrating Thirty Years of Lumpen, a Hub of Chicago Counterculture

Lumpen Magazine celebrates thirty years with a party, auction, and fundraiser at the Chicago Cultural Center. 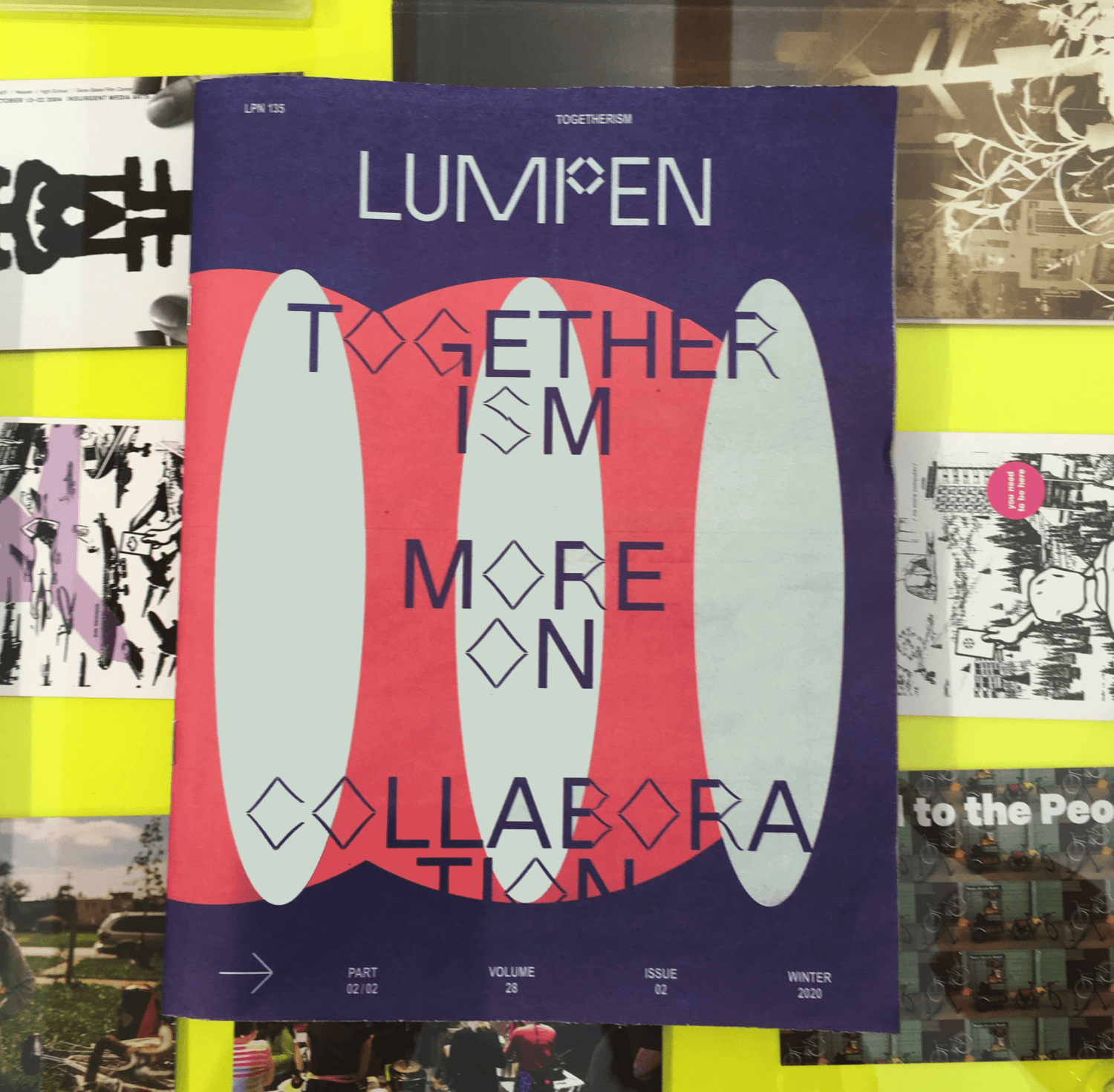 On the evening of Dec. 9, artists, chefs, and denizens of Chicago’s counterculture glide into the Chicago Cultural Center’s ground floor chambers to celebrate thirty years of Lumpen Magazine. Spanning several gallery rooms, “Successful Failures” both explains and celebrates the work of Lumpen over the years. Printed materials on worktables invite passersby to interact with the show and explore this node of Chicago’s underground press. The party plays into the displays: The vestibule of stacked neon Marz cans transforms into a functional bar; the mock radio station becomes an impromptu recording studio.

Founded as a zine in Champaign, Illinois, Lumpen relaunched as a publication out of Bridgeport in 1993. Thus began the promising construction of a “Community of the Future,” according to their motto. Skittering several paces along a wall at the exhibition, a helpful infographic describes the organizations that bloomed from Lumpen. Public Media Institute (PMI) soon became the umbrella organization for artist-led festivals, galleries, radio, and TV. These nonprofit organizations find support through The Buddy System, a unique symbiosis in which for-profit endeavors support initiatives like Lumpen Magazine.

As founder or contributor to many of these organizations, Edward Marszewski (or, as he was affectionately referred to throughout the night, “Ed Mar”) is at the heart of Lumpen’s successful failures. Jamie Trecker, the Buddy System Operator and the husband-half of the married duo that serves me Marz’ Cherry Lime Shrub Soda, describes meeting Marszewski decades ago: Shortly after buying a house in Bridgeport, Trecker came across Marszewski wrestling with a woman on the sidewalk who was trying to stab her boyfriend with a spork. This was outside the bar “Ed Mar” used to run with his mom. “Ed said, ‘Want a beer?’” Trecker recalls, “and I said, ‘No, I don’t.’”

An inauspicious welcome to the neighborhood nonetheless grew into fruitful collaboration. “I’m not saying Bridgeport was New York City in the [1970s]” Trecker says, “but it was fairly tough.” Gang issues and houses in disrepair contributed to the cheap rent that attracted artists. The neighborhood underwent an artist-led revitalization and, according to Trecker, became the site of “strange art happening freakouts.”

In the Cultural Center galleries, posters and multimedia exhibits honor the work of Lumpen and its many offshoots. A hokey catapult loaded with stuffed animals and surrounded by gilded gladiator-style armor commemorates art war (2007), a performance art in which hundreds of Chicago artists and cultural workers waged battle against Artopolis, an art fair that excluded the public. A banner demands “SURRENDER,” and, pelted by stuffed animals, what other choice does one have?

Nearby, “For Squat” signs tile an alcove. Proud and guileless, the fake Reuben Kincaid Realty lists ”abandoned or recently foreclosed-upon properties available for squat.” The faux storefront and website sheds its satire with links to organizations that address the housing crisis in practical ways.

The NFO XPO (information exposition) is periodically reincarnated at Lumpen events to provide space for artists to show their work for a week at a time. At the party, Sasha de Koninck (MFA Fiber and Material Studies 2015) placidly knits yellow, synthetic yarn in the center of the booth. Concerned about “the future impact of our current production and consumption cycle,” de Koninck holds the lumpy sweater up to better present its lumps. Surrounding her are other wearables crafted out of unexpected materials, like the padding of a jacket made of shredded produce bags and paper scraps. De Koninck is pursuing her Ph.D. in Intermedia Art, Writing and Performance at the Research Lab of Ambiguous Futurology at the University of Colorado, Boulder. Her work involves the creation of “future heirlooms” based on how participants characterize their vision of the future. 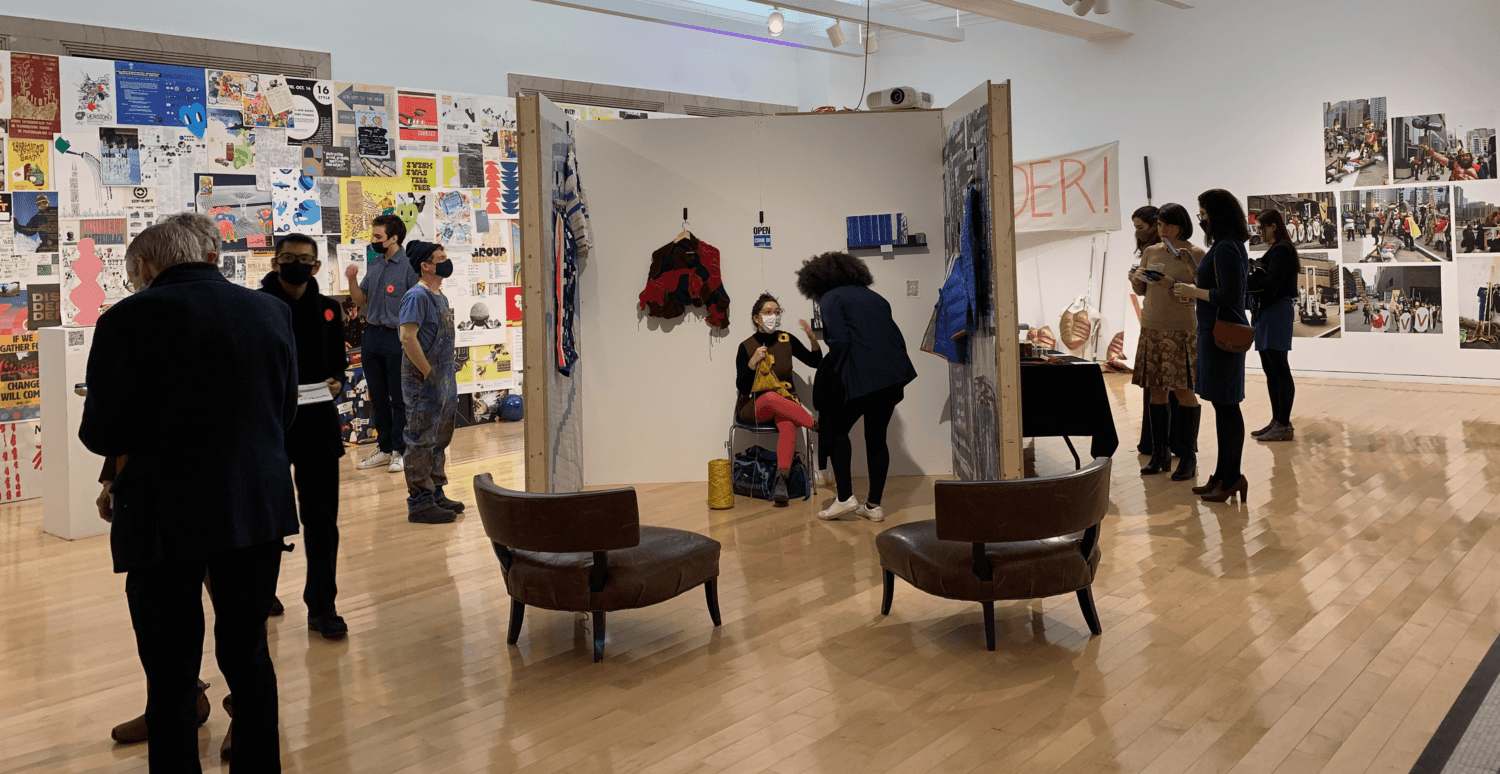 A variety of art pieces, from posters to ceramic cat heads, hang for auction in the galleries that lead into the interior ballroom. A DJ blasts very danceable music, but the guests are preoccupied by small plates of gem-like food. Tabled around the perimeter are about a dozen pop ups and restaurants affiliated with Lumpen. Kimski, co-founded by Marszweski, serves delicate dumplings in the style of half-Korean, half-Polish street food. Won Kim, co-owner of Kimski, jokes he had “nothing nice” to say about Marszweski. Kim describes how all the eateries are part of the Community Canteen Initiative, a collective formed during the pandemic that bolstered their communities by hiring, giving money, and/or serving free meals. For nine months, Kimski made 200 meals a week to give away.

This community-based ethos and plucky pride permeates all the makers affiliated with Lumpen. Brian Chumpchange, DJ of the Lumpen Radio 105.5 show “Release the Hounds,” describes how in 2005 his radio show became the first in Chicago to spin half-metal and half-punk records. The radio show is just one of numerous initiatives hosted at a 2,600 square foot gallery, Co-Prosperity (Co-Pro), in Bridgeport. Co-Pro hosts “exhibitions, screenings, presentations, installations, festivals, meetings, and performance programs,” and according to its website serves “over 20,000 individuals per year.”

The party was a small slice of a big effort, and the anniversary raised funds to keep the party going for years to come.

Michaela (MFAW 2023) is the News Editor at F Newsmagazine. Hopefully she is drawing a tree.

Bones or No Bones: The Elderly Pug Helping TikTok...