In Translation: I Talk British

Is belonging only associated with an accent? 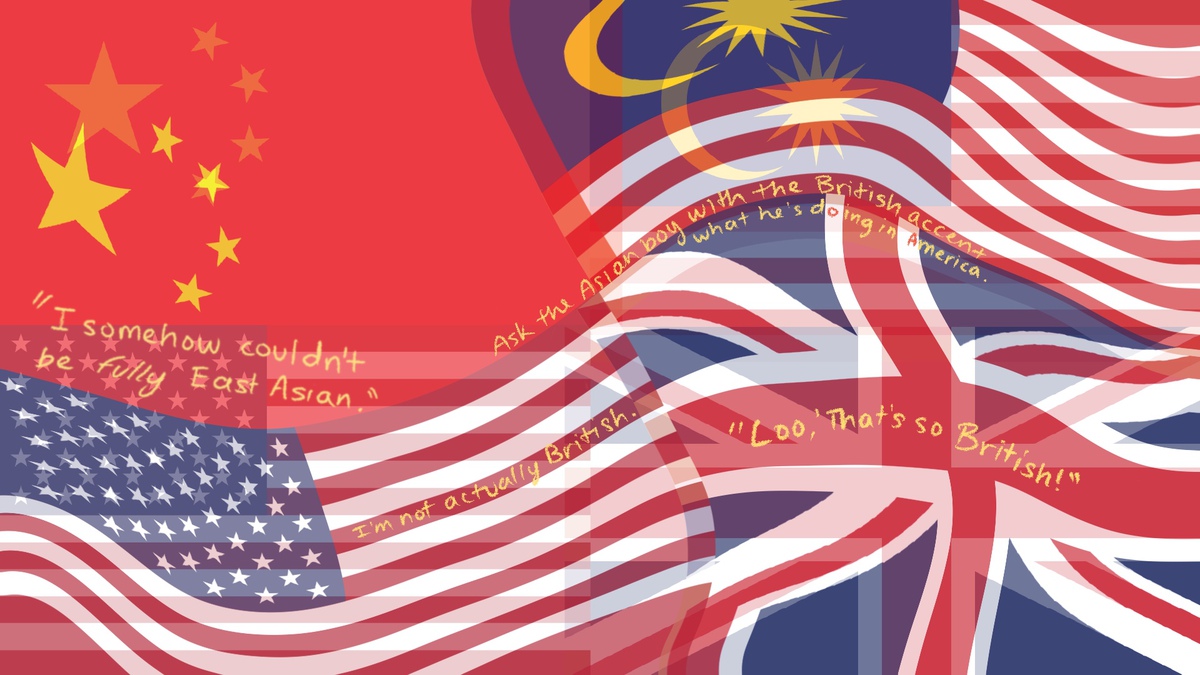 I was first told that I was British when I needed to pee.

I had told my then-roommate, “I just need to go to the loo, and then I’ll be right with you.” Unexpectedly, my words, which I had thought would come across as good-natured and a little jokey, only served to confuse her instead.

Since then, there have been countless other instances where something I say or do invokes confusion, and then some inevitable comment about being British. I call people “nice blokes,” and go on “holiday” rather than vacation, and suffer from what my former roommate called “British man problems” because my electric kettle won’t boil water fast enough to satisfy my constant need for a cup of tea. It’s been about seven months now and most of the heckling and the joking greetings of “‘Ello ‘ello ‘ello” have died down (amongst my friends; not so much strangers), but the social consensus on me is clear — I talk funny, and I talk British.

Being ethnically East Asian, interacting with me can sometimes prove confusing for people, given that most Americans appear generally disposed to envisioning old ruddy-nosed white men in flat caps when they think of “British people.” During a visit to the Art Institute of Chicago, I was approached by a museum guard who had overheard me talking to a friend. He asked me where I was from. I asked him if he was really asking where I was from, or if he wanted to know where the accent was from. “Yeah, I’m curious about the accent,” he admitted. “I wanted to ask if you were from England, but I didn’t want to presume.”

There is a lot to unpack in that single sentence.

When I think back on that moment I often find myself wondering what he thought would have been so wrong to presume. Did my East Asian features preclude me from being British? Or, conversely, did my British accent mean that I somehow couldn’t be fully East Asian?

It is these kinds of moments — of which there have been many, with strangers — that make me feel like some sort of walking poster boy for globalization, with a big neon circus freak show sign over my head that says, “Go on! Ask the Asian boy with the British accent what he’s doing in America!”

Despite the world having opened up considerably in the last few decades, the spread of globalization and international third-culture ways of life have not had much effect on the way many of us still think about race, nationality, and the link between the two. We still think in stereotypes, and balk at exceptions to the media-enforced images we have in our heads. Being a poster boy for globalization is not glamorous; it does not make me some kind of sleek international jet-setter straight out of a noir film. Instead, it is just encourages people to bring out their worst misconceptions surrounding race and nationality, and to lay them out in front of me, as if I am obliged to comment on them or to justify my existence in spite of them.

As an Asian person, the racial profiling I experience comes in the form of condescension; I am spoken to slowly and haltingly because the white person speaking to me presumes I do not understand English. When I speak back in perfect English — I was raised bilingual from birth, and now speak five languages — I am met with genuine surprise, and am told I speak “such good English,” or am asked about my accent. These sorts of interactions are beyond exhausting, and as both an international student and a person of color, I go through this almost every time I meet someone new.

I have a British accent, but am not an archetypal old ruddy-nosed white man in a flat cap. I look East Asian, but do not fit the racial stereotype of speaking bad English and/or having an unplaceable accent. To the strangers who have casually asked about my background, much like that security guard, their confusion therefore stems from the misconception that I can be neither fully British nor East Asian, because I defy the archetypal representations of both categories in a way that must somehow make me incompatible with either label.

Now here’s something to baffle you further — I’m not actually British.

I was born in Malaysia. Ethnically, I am Chinese. Socially, if my friends (and that one guard at the Art Institute) are to be believed, I appear to be British. I have the accent and the vocabulary and, to those who know me a little better, extensive knowledge of the culture. It didn’t exactly come from nowhere, though. I was schooled under the British education system since I was 13, and moved to England at 16, staying there for five years before taking a year out back home, and then finally moving to Chicago, where I am today.

But being “socially” British is a label I am reluctant to take ownership of, mostly because it means nothing. Legally speaking, I am as British as the Queen of England is young.

In the U.K. I wasn’t considered British at all. My accent and slang and enjoyment of a good pub brunch on a Sunday afternoon just meant that I had assimilated very well; that I was the kind of model immigrant who didn’t trigger that signature British xenophobia we see directed at Eastern European or Muslim immigrants and refugees in the wake of Brexit. I was still an outsider, albeit a tolerated one. I knew I didn’t fully belong. But having everything in common with the average British person save the passport and some political alignments, it was very easy to pretend that I did.

Is belonging only associated with an accent? Is that what we’ve come down to, in an attempt to quickly put someone in a category or box so they “fit” somewhere that is understandable to the average American?

Pretending to belong to England was certainly better than facing up to the truth of my reality — that I belonged to a country that didn’t want me. Growing up Chinese, bisexual, and transgender in a country that institutionalized homophobia, transphobia, and racism against its Chinese and Indian minorities, was traumatic enough. Moving to England at 16 felt like a breath of fresh air. Nobody minded that I was gender-non-conforming. Nobody pressed their noses up and called me “Cina babi” in the street. Nobody could arrest me and sentence me to a public whipping for loving someone of the same sex.

On the other hand, everybody liked my British accent.

It was a small form of acceptance, and even then, there are sentiments behind it that I did not think to interrogate back then, such as the question of whether or not an immigrant’s acceptance should hinge entirely on the way they speak. But still, it was acceptance. It was what I had been craving from my home country, and what I had been constantly denied, for so long.

Aside from my very existence being a political act, I had also been a cultural outsider in Malaysia too, having shucked off my original accent after switching schools and preferring British TV and music to whatever was on the local stations. Choosing to become a cultural chameleon wasn’t a matter of assimilation, it was a matter of growing an affinity for a country that would accept most, albeit not all of me, especially after years and years of being beaten and trampled and shat on by my actual motherland. Partial acceptance was better than outright rejection. And I was so, so tired of being rejected.

I’m aware of the irony that my situation evokes. Malaysia was colonized by Britain in 1842 and only gained independence more than a century later, in 1957.

Some Malaysian friends have drawn parallels to my life there, implying that I have become a colonized individual; that I have been “bleached” and just want to be white.

I vehemently disagree. I don’t want to be white. I just want to be who I am — Chinese, transgender, and queer — in peace. Why can’t that be enough?

While pointing out this myth for what it is helps provide some kind of justification (if one is required) for my cultural background, it still doesn’t quite answer the question of who I am. No matter how I reframe  the question of belonging, I can never find a clear answer. I’m still a jigsaw puzzle that shouldn’t fit — not because I’m a non-white immigrant in a Western country, but simply because I have one foot in two worlds and an inability to fully cross over into just one.

I’m not British, but I’ve never felt Malaysian. There are many things I love about both countries, and yet neither will fully accept me. All I have is a myth to tear down, and a prayer to raise that perhaps one day, neither acceptance will matter.

In Translation: On Kaal

Book Review: The Unreality of Memory and Other Essays...