In a film set under a brilliant, sunshine-filled sky, Midsommar makes it impossible to obscure its horror. 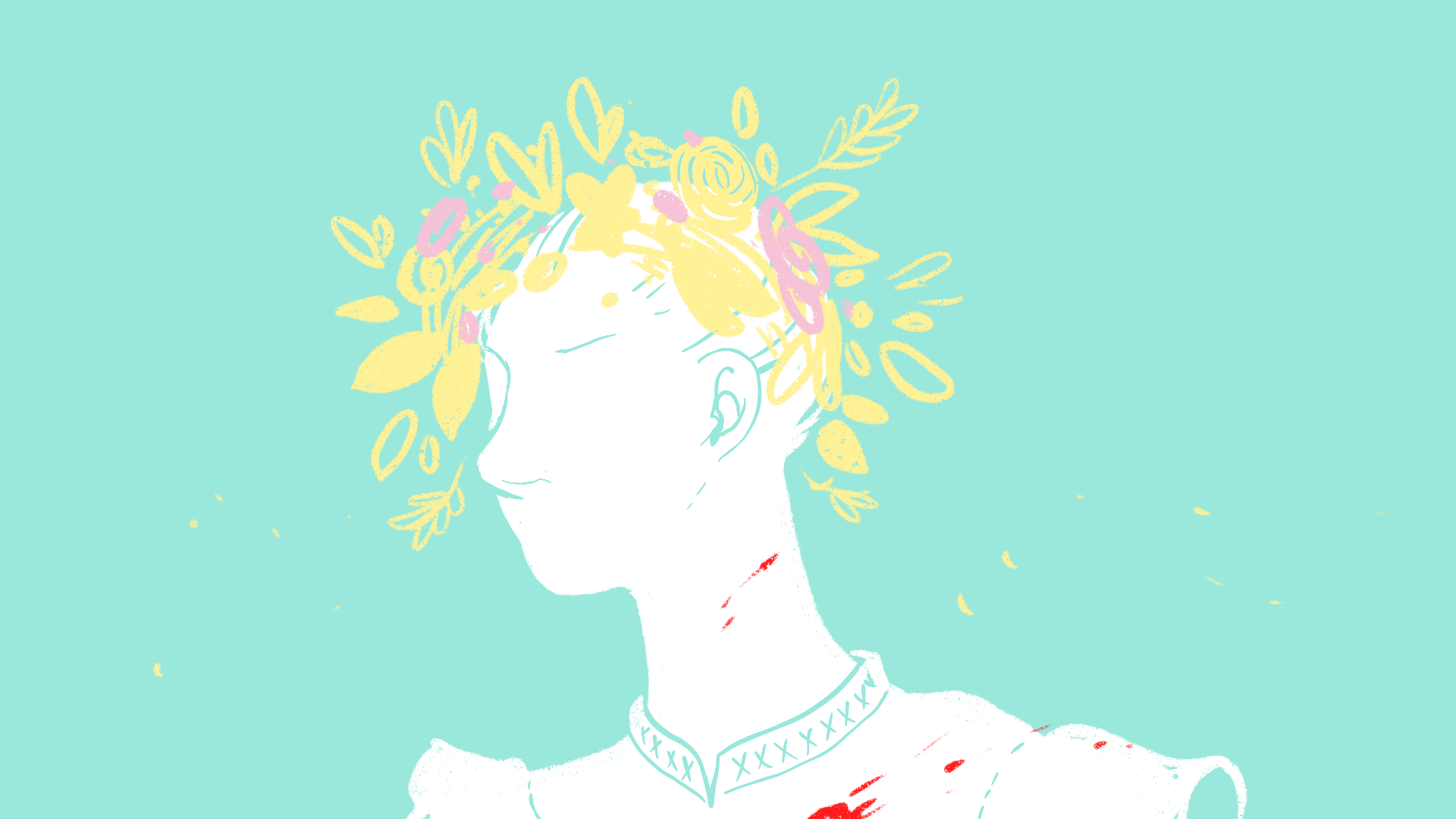 The opening frame of Midsommar shows a faded swedish folk art tableau presenting three seasons: winter, spring, and summer. A looming sun presides over the spring and summer with a maniacal grin that becomes more and more malevolent as you continue to look at it. This serves as the perfect way to begin the film: the sunshine doesn’t necessarily keep us from the darkness.

Midsommar is the new film by director Ari Aster, swiftly following his first feature-length film, Hereditary, which came out in 2018. Described by Aster as a breakup film, it follows  Dani (Florence Pugh) as she follows her boyfriend Christian (Jack Reynor) and three of his friends to a Midsommar festival in a remote community in Northern Sweden. What ensues is a series of ritualistic rites that spiral toward a breathtaking conclusion.

While the film has its flaws — including a dopey boyfriend who is far too easy to dislike — and plot holes (some small, some the size of canyons), Aster has proved himself a master of wielding uncanniness. Freud describes the experience of the uncanny (or “unheimlich” in German, which roughly translates as “creepy”) as locating strangeness in the ordinary. The film, at its most basic, is an exploration of uncanniness. It has a sunsoaked, folksy setting in the Härga’s community; wildflowers crowns adorn smiling, kind faces. Pelle, the soft-spoken Swede who lures his American friends to the commune, describes the festival as a sort of “theatre.” And when the group arrives, it appears to be just that: a group of Swedes playfully reenacting the rites of their ancestors. It’s about as idyllic as it gets, down to the adorable glassware that I would happily snatch up at Ikea.

Midsommar is an exploration of trauma, which itself is a form of uncanniness. In the first act of the film, Dani suddenly loses her family in a horrific double murder-suicide, the trauma from which haunts her throughout the film. She keens in gut wrenching grief and disbelief in the face of something entirely incongruous with a normal life. In this way, her life has been made uncanny. She is forced to go on with her life as it was before, except that it’s been made terribly, irrevocably wrong.

Where Midsommar especially succeeds is in its ability to recreate the senselessness, the mundanity, the surreality of horrific events while the sun continues to shine.  Aster’s manipulation of the uncanny is seen best when we see the mutilated faces of the victims. Also present in Aster’s previous film, Hereditary, the faces of characters we come to know throughout the film appear again dismembered, mutilated. The results of Hereditary’s infamous decapitation scene provide a shocking, and NSFW, example.

Where another film might cut away in the assumption that what you imagine is far scarier than what they could create (and easier on their budget), Midsommar intends to show you that what you see is indeed much worse. The film benefits from an insanely talented team of prosthetic makeup artists, stunt coordinators, special effects technicians and sound designers who recreate, with startling believability, moments of unimaginable horror. There is no heavy shadow to obscure the details, they are presented flatly, in full light, at the center of the screen.

Gore is a tenet of horror — the central one, many would argue — but Aster’s focus on the central image of a person, their face, is particularly meaningful. There is a specific horror to seeing the irrevocable, undignified transformation of a character after they’ve died. Aster is sure that you don’t miss it. The face is the locus of visual information, particularly in registering who a person is. Abjection is the goal here; what the viewer feels when a face is either entirely destroyed by injury or has been ritualistically mutilated. It’s meant to signify an obliteration of not only life, but personhood. In Midsommar, sacrifice is necessary to the Härga people because they consider themselves a piece of a greater whole. The cheeriness they employ in the destruction of self and of others parallels the uneasy visual marriage of gore and wildflowers.

This is not without precedent, of course. The alteration of a face is the basis of most horror. Leatherface, the chainsaw-wielding maniac in the Texas Chainsaw Massacre, dons the faces of his victims after he’s extracted them from their skulls. In the flim Us , directed by Jordan Peele, the characters that we’ve come to know have doubles; clones of themselves who have been forced to live their mirrored lives underground. Mary Shelley famously dreamt about the horrors of the uncanny face. She describes her horror in seeing a human face, animated by something that is not quite human. In the introduction to Frankenstein, she writes, “Behold the horrid thing stands at his bedside, opening his curtains, looking on him with yellow, watery, but speculative eyes.” Perhaps the fear in Frankenstein is less about an aberration against God and more about our fear of seeing someone made not themselves.

A human face, recognizable but made wrong, is at the core of the “uncanny valley” phenomenon, a term coined by Masahiro Mori. In layman’s terms, it refers to the emotional effect of observing an object resembling a human, causing distress as the object comes closer and closer to the real thing. As it applies to dead bodies and mortality salience theory, seeing someone we recognize after they’ve died reminds us that we, too, will die. Now our brains must grapple with this irrefutable information. It is a horror unique to the human condition, and as old as our self-awareness. What makes Midsommar specifically unnerving is how we are made to face the deaths of its characters.

Coupling an idyllic setting of forests, fields, flowers, and fjords with unimaginable horror that you’re not left to imagine, Midsommar weaves a convincing tale of uncanny, inescapable horror. It stays with you after leaving the theatre, when the images of the film linger and the sun outside now feels ominous. Bad things happen everywhere, even in broad daylight, when it’s harder to hide it away.