Bon Appetit’s Brad Leone proves that the next Julia Child is a big galoot from New Jersey. 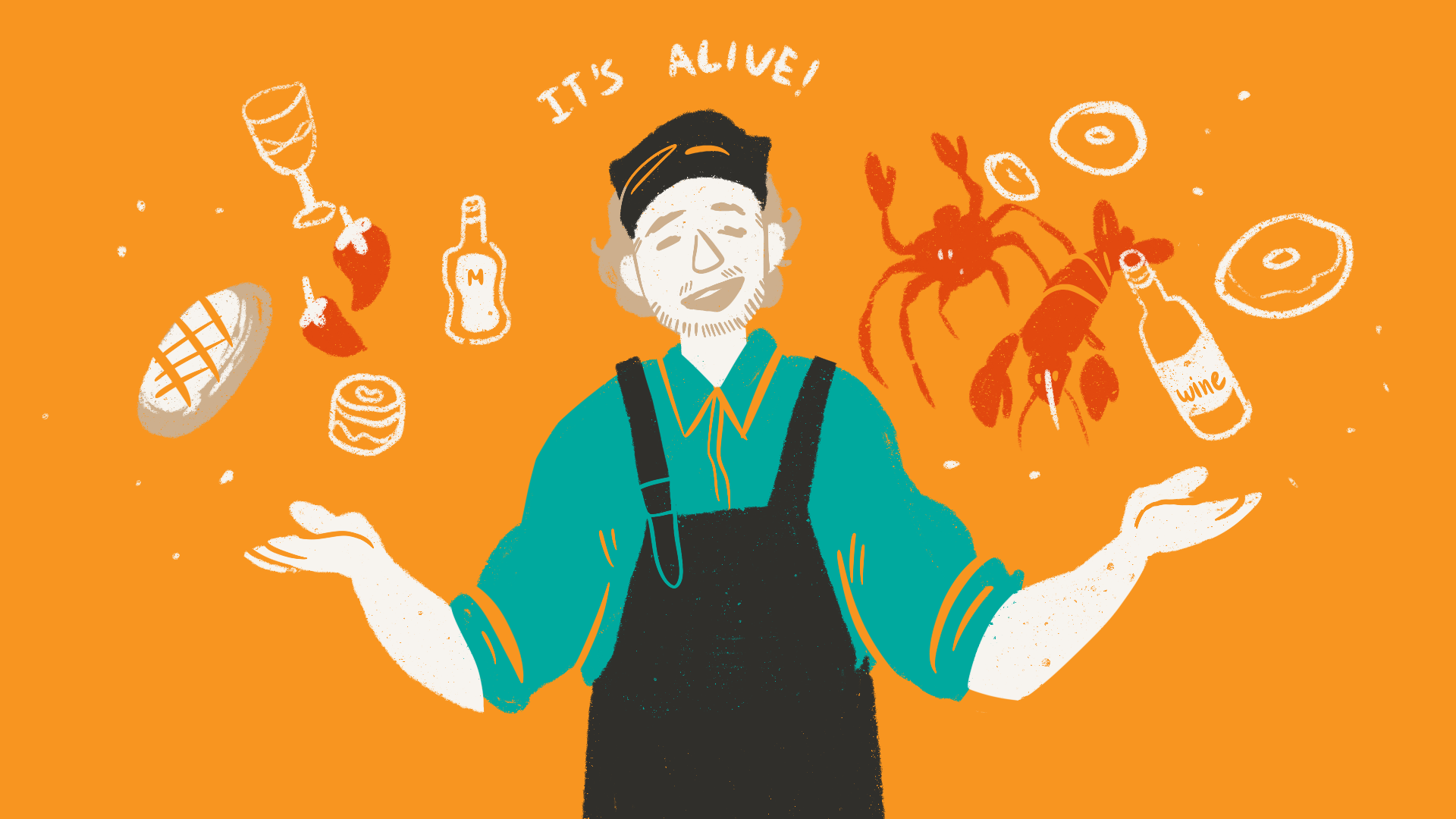 “We just need one, Vince,” Brad Leone says to his producer and cameraman, Vincent Cross. “And if it doesn’t work, we’re gonna pour the batter on top of ice cream and eat it. And then go home and look for new jobs.”

Brad Leone is a Test Kitchen Video Host at culinary magazine Bon Appétit, and recent online celebrity for his cooking series “It’s Alive! with Brad” on Bon Appétit’s YouTube channel. The series follows Brad as he shows viewers how to ferment foods and use fermented ingredients in cooking, often with hilarious (if unintended) results. In this video, Brad is making chocolate sourdough pizzelle cookies — an Italian wafer cookie — and attempting to cook them individually on the stove using a cookie iron. It’s not going well.

This video, “Brad Makes Sourdough Pizzelle Cookies,” currently boasts 2.8 million views, with each “It’s Alive!” video — 45 in total — hovering between 1-2 million. Needless to say, it’s an online phenomenon. Topics range from how to make kombucha to what a day looks like for a crab fisherman, and the show’s dedication to the subject of fermentation occasionally wanes. But across the board, Brad’s videos carry a welcoming enthusiasm for food and cooking that feels refreshingly different.

Brad’s look is somewhere at the nexus of “dad who is really into quality grill equipment,” “that guy playing hacky sack in the quad,” and “your neighborhood carpenter.” Big guy, well over six feet tall, with a punchy New Jersey accent that causes him to pronounce “water” like “wourder” and say things like “all’s you need.” He’s constantly dropping things and garbling his words, emphasized for comedic effect through Vince’s editing. Basically, he’s a total doofus who happened to go to culinary school.

“Brad Leone isn’t exactly who I pictured as the star of a food show,” remarks NPR’s Rachel Martin in an episode of Morning Edition, “especially not one from Bon Appétit Magazine, which is a highly curated, posh brand among foodies.”

That seems to be the point. Brad does not portray himself as an all-knowing, all-seeing master chef — quite the opposite. In another video in which he and other YouTube cooking sensation Andrew Rea — known as Binging With Babish — make ricotta cheese, Rea jokes that he shouldn’t be trusted because he never went to culinary school. “That’s cool,” Brad says, “I did. I didn’t learn anything.”

As television chef hosts go, every Gordon Ramsay is met with his Guy Fieri counterpart. The Michelin Star-wielding chef with his self-taught, bowling shirt-wearing foil. “It’s Alive!” nestles itself in the middle between these two ideas. Brad Leone is the center of the Venn diagram that overlaps “culinary school graduate” with “guy who makes repeated references to the 1993 film Sniper.”

Some of Brad’s videos offer relatively simple recipes viewers could replicate themselves (things like pickles, sauerkraut, fermented eggs). Others might be for more experienced chefs. For example, am I ever going to make beef jerky from scratch using my own homemade rub? Absolutely not. What 26 year-old has a dehydrator at home?!

Throughout “It’s Alive!” we watch Brad go through the mechanical steps of cooking food, but we also watch him delight in smelling it, tasting it, enjoying it. In one video titled “Brad Cooks King Crabs In Alaska,” roughly the last three minutes are just footage of Brad at the edge of a picturesque Alaskan lake, eating crab legs and moaning. “Oh my god,” he groans, after slurping up some garlic-sambal butter alongside a huge hunk of crab meat. “I don’t ever wanna eat anything else.”

Will I ever find myself on the edge of an Alaskan lake, eating king crab legs and dipping them into a steaming vat of garlic butter? Probably not. But that’s not the point. Yes, Brad’s videos are fun in part because it’s fun to watch someone else make food I will never make myself. But they’re also fun because food — even eaten vicariously — is pure fun. And surprising.

At the heart of “It’s Alive!” is a genuine, unpretentious respect for food and what we can do with it. Only through Brad’s videos did I learn how salt was made, or what the experience of mushroom foraging was like. Brad imparts a kind of relentless joy through his haphazard sojourn into the world of culinary delights, like the 6’5″, beanie-wearing, New Jersey reincarnation of Julia Child. And, like Julia Child, what Brad experiences is what we are meant to learn by proxy: If we remain curious, the world of food can be messy, but wondrous.

Like Entertainment The Joy of Cooking (and Eating)
« Previous Story