In a performance at the Art Institute of Chicago, Jamila Woods pays tribute to prominent black artists, activists, and musicians in a way that is uniquely hers. 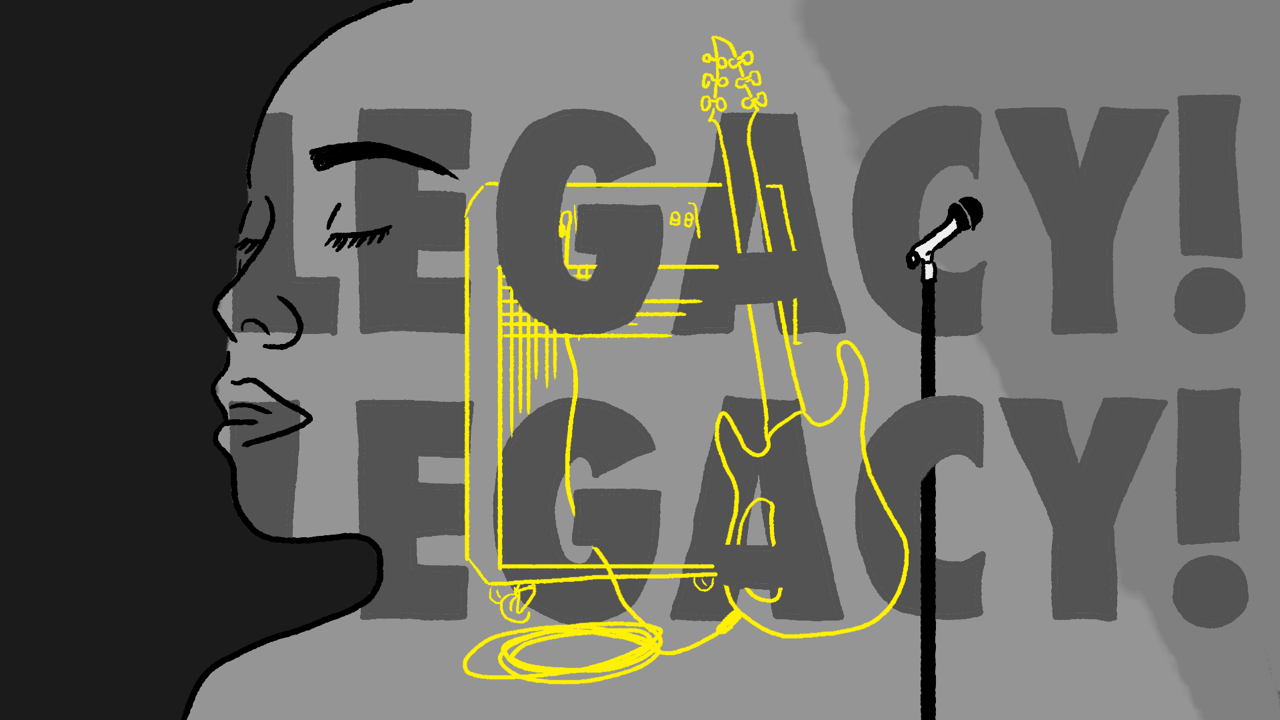 There is a phrase in “BASQUIAT,” a song from Jamila Woods’ latest album, “LEGACY! LEGACY!,” that encapsulates an overarching sentiment in this 2019 release. During the chorus of the song, Woods croons the words “After, after all, these teeth are not employed, you can’t police my joy.” The song, as its name indicates, takes inspiration from the popular New York artist Jean-Michel Basquiat, and specifically from an old TV interview where a journalist asks him what makes him angry. Channeling the artist’s long pause in that video, and his eventual response of “I don’t remember,” Woods synthesizes the idea of both black anger and black joy as something to display purely on her own terms.

For the Chicago-based singer-songwriter, poet, and teaching artist, this sentiment not only encompasses her album (and her musical work in general), but her live performances as well. As the closing act of the Art Institute of Chicago’s Block Party on July 21, Woods, accompanied by four other musicians onstage, delivered a concert that was equal parts celebration and anger manifesto. During the performance, hosted at the museum’s Rubloff Auditorium, Woods played the entirety of her album “LEGACY! LEGACY!,” a collection of songs inspired by artists of color. The record certainly pays tribute to household names like Basquiat, Miles Davis and Eartha Kitt, but it also makes an effort to elevate artists who do not have the level of attention they deserve, like writers Zora Neale Hurston and Nikki Giovanni.

A brief instrumental jam from the accompanying quartet, sans Woods, served as an orchestral overture, after which three syncopated piano chords cued the singer-songwriter onstage to enthusiastic applause. The setlist started with the album’s opening track, “BETTY,” an ode to funk pioneer Betty Davis. Woods has stated in interviews that, while elemental in the funk soundscape of the 1960s and 70s, Davis is mostly remembered for her brief marriage to Miles Davis and for being unapologetically sensual in a manner perceived as menacing to men. Woods’ own high-pitched, perpetually even tone might be the opposite timbre to Davis’ characteristic growl, but there is empathy nonetheless, most evidently in the lyrics “What is it with you independent men? It’s always something threatening your masculine energy, you think it’s fleeting.”

As the concert progressed, Woods continued to lead the audience in this plural homage, each song a window into a particular moment of an artist’s life. For most of the evening, she let her songs do the talking, but a couple of interventions stood out. Before the song “FRIDA,” Woods mentioned the house in Mexico City where artist Frida Kahlo lived with “another artist who shall not be named,” prompting laughs from the audience, and a wink to the hosting museum with two Diego Rivera pieces on display in their permanent collection. The song specifically addresses the bridge that joins Frida’s house and studio with Diego’s, an architectural solution to the need for emotional distance. “I like you better,” Woods sings, “when you see me less.”

The band not only reflected the spirit of the album onstage, but made it more raw, particularly in their rock-infused take on the song “MUDDY.” Woods’ track, a cover of fellow Chicagoan Kevin Coval’s poem about blues guitarist Muddy Waters, explores the musician’s reaction when a journalist asked him if the white boys who were learning his music could ever play like him. The song, with its heavy beat and crunchy guitar chords, made most of the audience sway energetically, if not full on headbang to the rhythm.

As the band navigated through soul, funk, rock, jazz, and hip hop, the audience was always eager to follow. They sang along to the vocalizations that she invited them to sing. They danced in their seats. They raised their hands and moved them to the beat. Yet when Woods sang, her timbre always hovering over the music behind her, the audience listened. Those who knew the songs mouthed the words; others looked at her attentively, like they would a lecturer, or better yet, a poet. And Woods, without needing to sing louder, made herself heard.

The mood kept growing until “BASQUIAT,” arguably the climax of both the concert and the album. The fast-paced bassline and cymbals, performed just as they sound on the record, accentuated the slow burn of the song to Woods’ words: “I’m a stovetop, baby, I smile in your face, but the oven’s on high.” As she sang the call-and-response section of the song, “Are you mad? Yes, I’m mad. What make you mad?” the beat developed a sense of urgency, slowly building up and becoming harder to contain. Then, to the words “you can’t police my joy,” the band reached the boiling point, exploding into a reggae-like shuffle where everyone, both onstage and in the audience, let go and swayed to the beat. Woods’ smile as she embraced the new, slower groove, was contagious. The musicians breathed a sigh of relief. The poet gave her audience access to her joy, but only when she decided to do so.

The concert was mostly made up of “LEGACY! LEGACY!,” but the setlist included two songs from Woods’ previous album, “HEAVN,” from 2017. In the middle of performing her newest release, she asked the audience “can we play something from HEAVN?” prompting cheers before starting to sing “Stellar.” In many concerts, the audience usually listens politely to the new material, but is really there for the classics. In this case, having an artist ask for “permission” to play some of her older material shows the kind of audience she attracts: people who are not only there to groove to her music, but to truly listen to what she has to say.

The second song from HEAVN came at the very end of the concert, when Woods requested an applause to all the black women in the audience, before playing “Blk Girl Soldier.” The cheer extended to the black women onstage, of course, not only Woods but also her musical director, keyboardist Aminata Burton, also known as AMI. Besides rocking out with elaborate solos and playing in all manner of styles from blues to Latin tumbao, it is worth celebrating a black woman, and the only woman playing an instrument onstage, in a position of artistic authority.

Woods is in a unique position in her musical career. “LEGACY! LEGACY!” has received rave reviews from The New York Times, Rolling Stone, and Pitchfork. Greg Kot, Chicago Tribune critic and co-host of WBEZ’s Sound Opinions, gave Woods’ album the number 1 spot in his list of Top 10 Albums of 2019 so far. She is, of course, a well-known presence in Chicago beyond her music, as a published poet and Associate Artistic Director of Young Chicago Authors. Now she is gaining international popularity for her music, but she remains an approachable figure. On her Facebook page, fans ask her to perform in South Africa, Argentina, Australia, while her grandmother writes, in all caps, “I LOVE THIS YOUNG LADY!! SHE KEEPS GOING PLACES.” Likewise, her audience understands and appreciates her as such. They applaud her like a rockstar. She smiles back like an old friend.