Pie in community and creativity.

Pie in Community and Creativity

“Sweet as pie.” “Easy as pie.” “A piece of the pie.” “Pie in the sky.”  “Humble pie.” Clichés and idioms surrounding the most ubiquitous of pastries abound and find their ways into our everyday speech. Pie holds a special place in the American palate and consciousness, and as Thanksgiving approaches the dessert mainstay will once again find its way to the collective table.

To quip that “everybody loves pie” may be a bit of a stretch, but as F Newsmagazine found from a recent survey, many are happy to weigh in on their favorites. As a precursor to the harvest extravaganza later this month, we asked people near and far to share their opinions. The results were just as diverse as the sample, showing that sweet and savory pies alike are at the heart of our culinary and cultural memories. 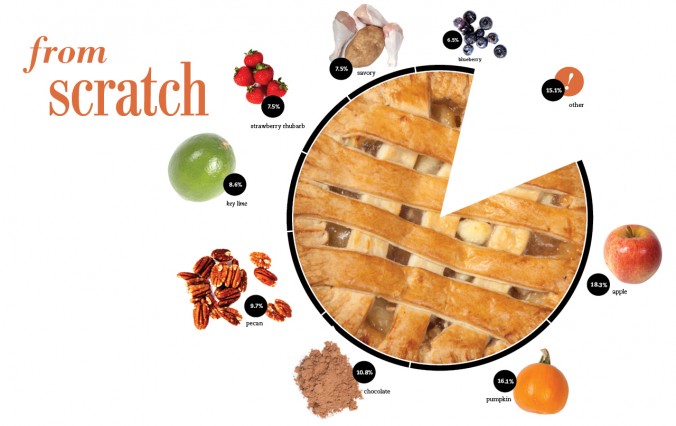 The pedigree of the pies that we bake, share and enjoy for the holiday is almost as complicated as written history itself. Curiously, the Oxford English Dictionary notes that the word “pie” may have derived from the magpie, the black and white bird known for collecting anything and everything, as a link to the fact that early pies contained a smorgasbord of seemingly unrelated ingredients. That would help to explain the classic prevalence of an association between birds, pies, and live birds in pies, such as in the English nursery rhyme “Sing A Song of Sixpence” where “four and twenty blackbirds” emerge from a pie and sing.

According to The Oxford Companion to Food, “proto-pies,” or concoctions that consisted of “a mixture of ingredients encased and cooked in pastry,” were found in ancient Egypt, Greece, Rome and the Middle East. The specifics of pie making in Medieval Europe were seen as such common knowledge that no recipes for pastry appear until the middle of the sixteenth century. And indeed, the ever-popular American incarnation of apple pie traces its lineage to fifteenth-century England and a journey of culinary colonization. As food writer, editor, and former American Pie Council executive director John Lehndorff notes, “When you say that something is ‘as American as apple pie,’ what you’re really saying is that the item came to this country from elsewhere and was transformed into a distinctly American experience.”

In the recently published “A Commonplace Book of Pie,” poet and baker Kate Lebo explores how the many ways to write about pie can turn into a blurring of the lines between fact, fiction, and folklore. A commonplace book — a book where one would write down a collection of thoughts, proverbs, ideas, notes and more — is akin to a cook gathering ingredients to inspire a meal or the magpie gathering treasures. In Lebo’s charming revitalization of the form, she utilizes a mix of prose poems, recipes, humor and “fantasy zodiac” to consider the complicated relationship that pie holds in our hearts, playfully hinting that the nature of a favorite pastry could possibly betray one’s hidden character.

In its familiarity and conjuring of deep-seated domestic memories, pie can act as a playground for metaphors of all kinds. A particularly rich (if not mind-boggling) example of this is Carl Sagan’s famous proposition: “If you wish to make an apple pie from scratch, you must first invent the universe.” Although the visionary astrophysicist likely intended this to refer to an optimism that humanity can one day harness the very nature of matter, it could be interpreted as a wink on the artistic process. Taken literally, there is a difference between “creating” and “inventing,” but at the heart of bringing a vision into the world are the raw materials. Like art, pie really just gets down to the fundamentals. Bakers, writers and artists work with basic materials, emotions and ideas to try to create new forms. The true beauty is often in the journey, and the product is the evidence.

As Lebo shows, a pie, like art, is in its essence no more than a container and its contents; the structured and the unstructured, the form and the idea. “I have poet and professor Heather McHugh (of the University of Washington) to thank for bringing me to the metaphor,” she notes in a Q&A with her publisher. “During a class she said something along the lines that ‘the container must be precise to contain the uncontainable.’ She was talking about words, but also about our task as poets. The problem of the artist, she said, is to convey what is bigger than what you know while being precise in your word choices. It took me until nearly the end of the penultimate quarter of my MFA to realize that we shared this obsession with containers — but my container was made of dough.”

In addition to writing poetry and teaching creative writing, Lebo also travels the country hosting Pie Stand, a way to connect communities of all kinds and promote conversations over slices of pie, and Pie School, a pastry boot camp that encourages nervous bakers to overcome fears over baking less-than-stellar pies. “Around the time I was about to graduate from the University of Washington, people wanted to know what I was going to do with my MFA in Poetry,” she told F Newsmagazine, “and I would flippantly answer, ‘Start a pie school.’ I said it enough that the idea started to seem like a good one. [Then] the idea stuck.” Family is the driving reason for many attendees; the two common themes that she sees with her students is a desire to learn how to give loved ones more delicious food or to share in a learning experience with them.

Tasty results aside, baking pies can just as easily become a meditative mode akin to writing, painting, playing music, yoga or any kind of creative pursuit. It can even supplement and inform an artistic practice, as in Lebo’s case. Especially with the holidays’ embedded drive to please and nourish loved ones, it may be tempting for occasional bakers to get flustered from glancing at the stunning photographs in glossy cookbooks or try to revamp an heirloom recipe. Just like any creative battle, the process is just as important, if not more, than the product. It can be daunting to just show up to try, let go and confront that nagging resistance and self-doubt head on in the attempt to bake something mindblowingly delicious. But, with the sheer act of just making, the roadblocks will effortlessly fall away. At the end, there’s the bonus of dessert. Even if it’s not especially “good,” it’s yours, and everyone who matters will love it just the same. It will be a taste of your own universe, from scratch and with love.