The UK-based electronic musician plays with light, sound and architecture. 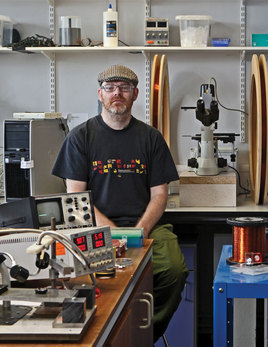 Mark Fell is a UK based artist and electronic musician interested in playing with our perception through the intersections of light, sound, and architecture. Often his works include using multiple speaker arrays to create imaginary sound fields. Saturday November 2 he performed in Chicago for the first time as a solo composer as part of the Lampo series of experimental music. These events, mainly held at the Graham Foundation, are always free and involve diverse and accomplished musicians from around the globe.  Fell debuted a new work he developed during a residency at Elektronmusikstudion Stockholm, in which he used 32 samples from an old synthesizer. By layering them over and over, in a circular pattern around the quadrophonic speaker array, he created a transition of physical understandings of scales of space, from the very small to the overwhelmingly large, and from the infinitesimally distant to the inter-permeably present.

Initially I was unsure what to expect from the performance.  There was a crowd, so it was standing room only or sitting on the floor.  I sat on the well-polished wooden floor, in a spot that allowed me to lean against a door. The program was introduced. Fell sat at his computer, and the lights went off.

Quiet low static around 60Hz begins.  I want it to be rhythmically interrupted by phasing.  High overtones begin to build at about 4,000Hz with something in the low 200s and then the 2,000s, followed by a twitter coming in at 15,000Hz.  Perhaps. I never think about sounds in terms of numbers, well not never, but this ceaseless buzzing is making me feel like I am deeply associated with household electronics and must start to think like a machine.  From a loose socket, to a kettle, to a hair dryer humming in a tiled bathroom, a vacuum cleaner floating in space, to motors on a runway a mile distant.

Then the sub-bass kicks in and the speakers are making breeze.  A refined tectonic shifting, the pre-tremors that can be mistaken for a passing mosquito, swiftly compounds into a harmonious swarm of insect wings blending with an angelic choir. We’re still in the subtle realm here, a gentle emergence of aurora borealis. The sounds open up and shift like the filter of a mouth and cheeks, exhaling “ahhh, aw, ah”.

From the back of the room a sound emerges like a truck, distant revving motors that are too constant to be passing, hovering at the back of the room, filling the space more and more with each rotation of the cylinder. Then, a coffee machine, an HVAC.  And the shuffling shoes on the wood floor and crumpling of discarded winter jackets of the late arrivals as the infrequent light of passing vehicles in the street reflects on the ceiling.

Now comes the electronic bumble bees, dragonflies, the singing electric wires. As the sounds become more layered, I’m less interested by identifying frequencies and more associative about the harmony of physical objects that emit sound from interacting with each other.

There’s no return, only a movement forward, despite the reuse of material, we are heading towards somewhere we cannot come back from. The only rhythm comes from phase differentials and as they shift, the tonal shift becomes noticeable.

From sine waves, we get our first square waves, then triangles and then a million strangely shaped geometrical mouths filtering a water pump, by the power of a hesitant solar wind, beneath a summer fan dangling near an open window by a precarious wire. The sounds are warming.  An overheated Jacuzzi, ventilation over a frying pan, white noise, a whine, crickets, hissing, buzzing, the sound of an engine on an airplane wing from the inside; the sound you hear when you lean your ear against the double insulated glass of the plane’s window.

The sounds are ascending.  Sitting on the floor, I can feel my innards shaking.  A train pulling into a station never sounded so good, while still bordering on bearable.  Screaming brakes are waking me up after my android-al dream of electric sheep. Raw elements are coalescing. I fear permanent dismantlement of my DNA.

And then he shuts the power off just before boiling seas engulf the world in apocalypse.

The audience applauds and we go drink complimentary wine thankful not to have had heart attacks.

One Response to Review: Mark Fell at Lampo