Chicago’s street art seems to be everywhere I go lately, which I won’t complain about considering the vibrancy and diversity of street artists in this city. 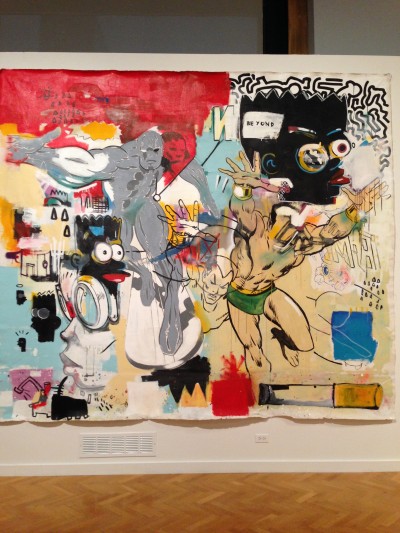 Last weekend, I embarked on a day trip to Pilsen organized by SAIC Multicultural Affairs Office and became acquainted with Hebru Brantley‘s work as we were visiting the Lacuna Artist Loft Studio. Hebru also happens to be the 2013 artist in residence for the Chicago Ideas Week, which took place just last week. For the occasion, he created a series of 20 colorful sculptures reminiscent of the characters populating his bold artworks. I met with Hebru’s characters once again last Friday as I attended “Paint, Paste, Sticker : Chicago Street Art” opening reception at the Cultural Center. The exhibition is colorful, loud and playful. So playful actually that the kid walking in front of me could not help diving into the gigantic inflatable structure that stood at the entrance of the exhibition to the dismay of her mother. 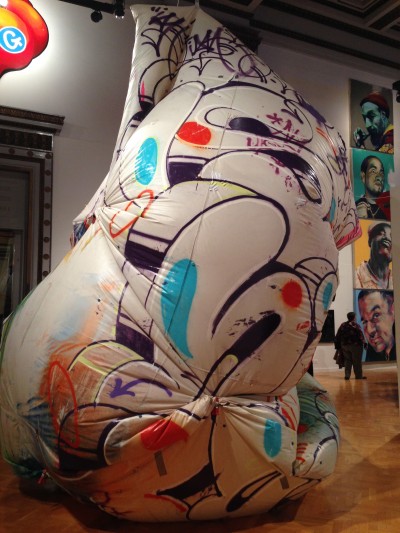 It is fair to say that the first night of the exhibition was a success; 15min after doors had opened, it was already crowded, which made it somewhat difficult to get close and appreciate the art. However, the atmosphere was extremely friendly and it was obvious that a majority of attendees knew each other. It felt more like a informal neighborhood reunion than anything else. “Paint, Paste, Sticker”, as the name suggests, brings together multiple medias and street art forms: animation, sculpture, video, graffiti, collage, neon and many more. I was happily surprised to encounter several female artists in what I expected to be an entirely male-dominated scene. Among the few ladies represented were Liz “Beloved” Lazdins and Stephanie “Stefskills” Garland. The exhibition also included documentation on community arts initiatives including Alderman Solis’ Art in Public Places (AiPP). Developed by Lauren Pacheco, founder of the Chicago Urban Art Society and SAIC graduate student, AiPP has successfully transformed neglected urban spaces into unhoped for canvas for high quality street art. It is hard to incorporate the aesthetics of street art within a venue such as the Cultural Center without making it look out of place, and the juxtaposition of white walls with objects from the street environment such as post signs that have been re-appropriated by artists don’t always work. 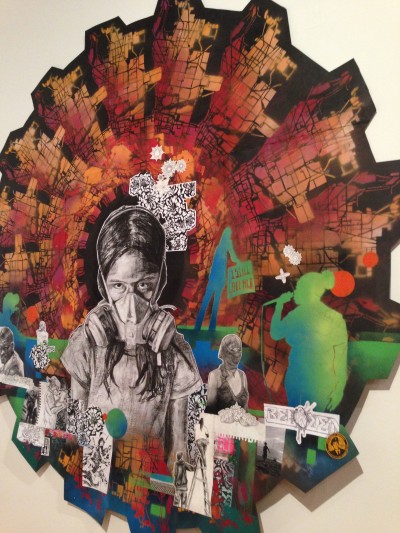 Two of my personal favourites, Ruben Aguirre and Miguel “Kane One” Aguilar, are also showing their work at the National Museum of Mexican Art in the exhibition “Outside In” which covers the Mexican-American Street Art Movement in Chicago — I am telling you, street art is everywhere. Mainly focused on graffiti, murals and paintings, “Outside In” is a small yet powerful exhibition. I personally fell in love with Miguel A. Del Real’s artwork which mixes graffiti art with pre-columbian designs and calligraphy. 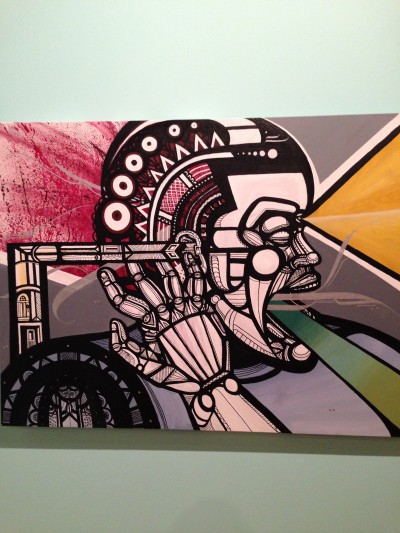 If you wish to immerse yourself in Street Art but are not quite ready to hit the city’s alleyways on your own, “Paint, Paste, Sticker: Chicago Street Art” is on until January 12, 2014, and “Outside In” closes on December 22.

One Response to Street Art on White Walls