How Sound Brought Art to Life at the 55th Venice Biennale.

How Sound Brought Art to Life at the 55th Venice Biennale 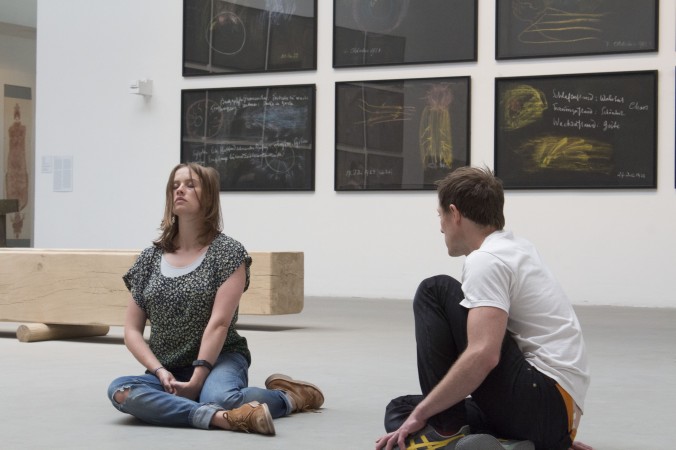 Venice sounds like no other city. Absent are honking horns, ringing bicycles, the dull roar of motors. Instead, one hears the gentle lap of the tide brushing against the channel walls, the slow chug of vaporettos wending along the grand canal and above all else, the murmuring glossolalia of countless voices ringing out at once. Venice is a city where visitors outnumber residents by a factor of 10, the native dialetto drowned out by the cascade of foreign tongues. Transpose this sense of language in multitude to the main sites of the 55th Venice Biennale — the hushed Napoleonic-park of Giardini, and the once bustling, now abandoned shipyard of Arsenale. Among another teeming multitude, that of the plastic arts arranged on seemingly every stable surface, it should be no surprise how works and installations involving experiments in sound distinguished themselves from the crowd. Across the expanses of the Giardini and Arsenale, much of the most impactful work found a way to sigh, sing or sob in the universal language of art.

Art is the Language of Venice

Tino Sehgal has enjoyed an impressive run over the last 18 months. After earning rave reviews at dOCUMENA (13) last fall, he took over Tate Modern’s Turbine Hall. This summer he crowned this string of accomplishments by winning the Golden Lion for best artist in the International Exhibition at the Venice Biennale. Sehgal’s untitled work occupied an open gallery floor at the center of Biennale director Massimiliano Gioni’s “Il Palazzo Enciclopedico (The Encyclopedic Palace)” at the Central Pavilion of the Giardini. In the center of the room, performers, whose ages ranged from the early teens up to middle age, sat, lay or writhed on the floor. They hummed or beat-boxed riffs that alternated between not-quite-identifiable pop melodies, guttural growls and quiet chants, all set to a fluctuating internal meter that set the sounds firmly in the realm of music. The performers took turns building sounds together as each also improvised movement to his or her partner’s tones.

At the heart of Sehgal’s piece was a dissolution of boundaries about what is art, what is performance and what is proper in a museum space. The literal boundaries of the exhibition also dissolved, as observers and passers-by sat quietly watching, walked mindlessly through the space occupied by performers, or in the case of small children I observed, accompanied the performers with little dances and songs of their own. It was this last interaction that set the piece free: children who haven’t been indoctrinated by the bylaws and social stigmas of proper “white cube” behavior. For them, there was nothing peculiar about the game the performers played; I saw one child walk boldly up and join the performers for a moment, before his socially-aware parents literally pulled him away. Sehgal had created a museum experience that subverted traditional expectations. There was no art object to admire (though Sehgal does sell his work in a Lewit-tian fashion), there was no privileged boundary or vantage point from which one could experience it. One simply wandered in, out or around the work, in my case, both charmed and unsettled by this unique art viewing experience.

Where France Became Something Altogether Different

Attributing the characteristics of a nation upon any work of art is a dangerous if not inherently misleading point of perspective. Yet the Biennale’s structure of national pavilions creates a perpetual siren call of mis-interpretation that is difficult to avoid. The best of the pavilions had a sense of humor, if not mischievous deception, about the idea of national identity. Perhaps most playfully misleading was the French exhibit, which was housed at the German Pavilion (France and Germany celebrated the 50th anniversary of the Elysée Treaty by trading pavilions). The French then chose Albanian video artist Anri Sala’s “Ravel Ravel Unravel” as their representative work, further displacing the false sense of national character.

Sala’s video installation was based on a Ravel piece written solely for the left hand. Two film recordings were taken of concert pianists performing the piece and a third video was shot of a DJ doing her best to play the two recordings simultaneously. What should have been a simple proposition unraveled in the act of performance. On paper the Ravel composition is strictly metered and composed, leaving little room for interpretation. Yet in the hand(s) of the virtuosio pianists, creative élan led to subtly different products. The differences were then expounded by the attempts of the DJ to synch them. The pavilion itself was separated into three large rooms with each beautifully shot film displayed in a massive projection. The volume of each film approached deafening levels, which sent sound waves careening around the pavilion, blending the soundtracks of each projection.

All assumptions about the grandeur of virtuosity were simultaneously challenged and elevated. The overall effect was stupefying in that one’s sense of rhythm, sound and expectation were in a constant state of disruption. The senses were all at once treated to the exquisite beauty of the composition, its performances and the creative vision of the artist who so delicately blended them together.