Andrea Zittel Speaks at SAIC
The artist opened this year’s Visiting Artists Program with a discussion of the evolution and intertwining of her life, art and work. 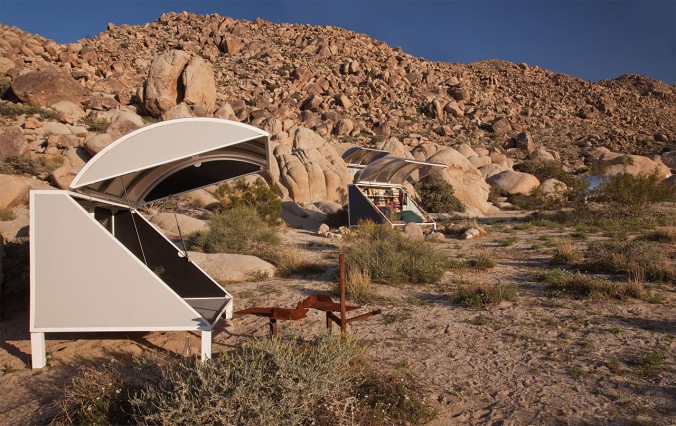 Andrea Zittel opened this year’s Visiting Artists Program series of lectures at the School of the Art Institute of Chicago on September 9th, with a discussion of the evolution and intertwining of her life, art, and work. In her work, Zittel poses questions considering how life functions through her art, experimenting with many of the same concerns of architects and interior designers. In her A-Z world of architectural structures, interior organizational environments, clothing, dehydrated meals, and restructurings of the daily use of time, she explores the shared boundary between freedom and constriction. She introduced the lecture with “Free Running” (1999), where she lived locked in a basement in Berlin, without human contact or timekeeping devices for a week. This piece, she told the audience, was a learning experience for her that further concretized her conceptual investigation of progress, individualism, and the possibility of liberation from socially imposed guidelines by setting her own. 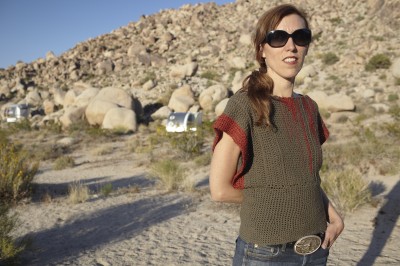 Much of Zittel’s lecture recounted how confronting economic challenges became integrated into her work. Fresh out of art school in the early ‘90s, she moved to New York during a recession when galleries were closing and high profile artists were getting day jobs. The way survival shapes the life of an artist became an essential element of her practice. She rented a cheap 200-square foot storefront where she lived and worked. In order to manage her project within such a small space, which at that time involved breeding animals, she constructed “management and maintenance” units with spaces for sleep, meals and exercise. Inspired by the micro-spaces she had created for the animals, Zittel constructed her own management and maintenance unit. This piece of portable architecture, initially built as a tool to help organize her living space, became a new focal point for experimentation.

As her home and studio merged into one, she began the reorganization of her life around self-set limitations. She experimented with the built environment and with daily activities like wearing the same handmade clothes and eating meals with the same simple ingredients every day. Finally able to purchase a property in 1994, Zittel acquired the building for a more permanent presentation venue. A-Z East became her Brooklyn testing ground. She experimented with more ideas of dwelling: for example, the thought that the inside of furniture might be more comfortable, building a “pit bed.” She blurred lines between public and private by wearing homemade pajamas all day, and explored possibilities for the “multi-use” of space through her Ottoman furniture (which could serve as storage units, tables, chairs and beds).

After moving west and reconsidering her practice in light of a shared life with a partner, the artist developed the aesthetic concept of “Raugh,” scrutinizing the meaning of surfaces that camouflage dirt. Surfaces that show dirt are easier to clean, but also require that action; Zittel played with this capacity to show or hide dirt in the construction of giant foam boulders. She also continued to experiment with her A-Z concept within the Californian model of urban planning, what she referred to as “capsule culture,” a desire for private and isolated space. She built “cellular compartment units,” multi-level living spaces with designated specific uses for every minute cubic room, inspired by the giant single-developer McMansion-style housing developments that were beginning to incorporate such lavish un-necessaries as servants’ quarters. She further explored the psychological and social effects of architecture with the construction of the A-Z Pocket Property. While living on this concrete island built off the coast of Denmark on the North Sea, she discovered that the illusion of autonomy can actually lead to increased passivity.

In the late ‘90s as Zittel’s work toured the world more often, she began questioning art as an export. Deeply rooted in American lifestyles, she felt her work lacked something once it was removed from its context. So, once again she decided to create a home that would also serve as a studio. A-Z West, built from the base of a homestead house in Joshua Tree, California, would become the base of creation, conception, and viewing of much of her work.

The desert, Zittel asserts, is a place people are drawn to for its sense of freedom and autonomy. But within the confines of county government, the construction of a studio and living units required negotiation with local bureaucracy. With these in mind, she constructed guest bungalows, called wagon stations, a play on station wagon cars which are in Zittel’s view the smallest place where it’s still possible to comfortably sleep. She began to view these bungalows as escape pods, with their hatch doors closing out the outside world. They also became customizable prototypes as the artists that came to stay at A-Z West redesigned the wagon stations according to their own practices.

Zittell has been combining the practice of art-making with the practice of living for decades. Recently she has begun to create paintings of aphorisms to disseminate the hypotheses resulting from her living experiments. The series “These Things I Know For Sure” take the form of advertising billboards. By framing these proclamations of truth within the format of advertising, she poses a dilemma for the viewer about the possibility of definitive answers.

During her brief visit to Chicago, Zittel took time to meet with several students on studio visits. She will be returning to SAIC throughout the year as the William and Stephanie Sick Distinguished Professor. She will lead three workshops in Thing Lab, a year-long sculpture class led by Dan Price and Tim Parson that includes students from design, art, and writing backgrounds to engage and question the market forces of taste-making and power relationships in the world of collecting objects. 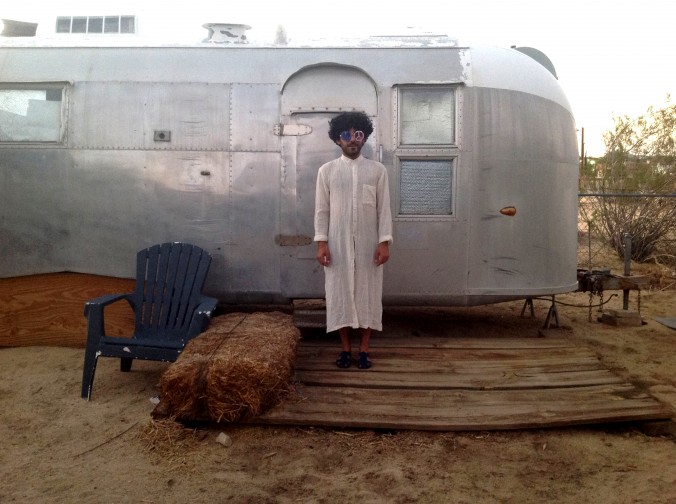 Inspired by the landscape of Joshua Tree, which he explored on a roadtrip this summer, Murat Agdas wanted to meet with Zittel to discuss the possibility of initiating an exchange between SAIC and the Institute for Investigative Living at the A-Z West “test site.” He’s interested in learning “not necessarily about what she makes, but how she makes.” He had heard about a residency where A-Z West hosts ten students from Columbia University, New York and Bazalel Academy of Art and Design in Israel to collaboratively make work for ten days. The residency, which happens after the end of the school term, at the end of May, is a holistic art-making experience including specially prepared food, lodging, and visits from alternative healers. Zittel expressed support for the idea and has been in email contact with Murat, sending information and posters. She is also considering building more Wagon Stations to accommodate additional students from SAIC. The ten-day residence costs $1,400 and requires the use of a car. Following on models from Columbia and Bazelel, Murat is contacting administration at SAIC to try to initiate a scholarship fund to support an Off-Campus residency at A-Z, hopefully starting this May and continuing for future years. 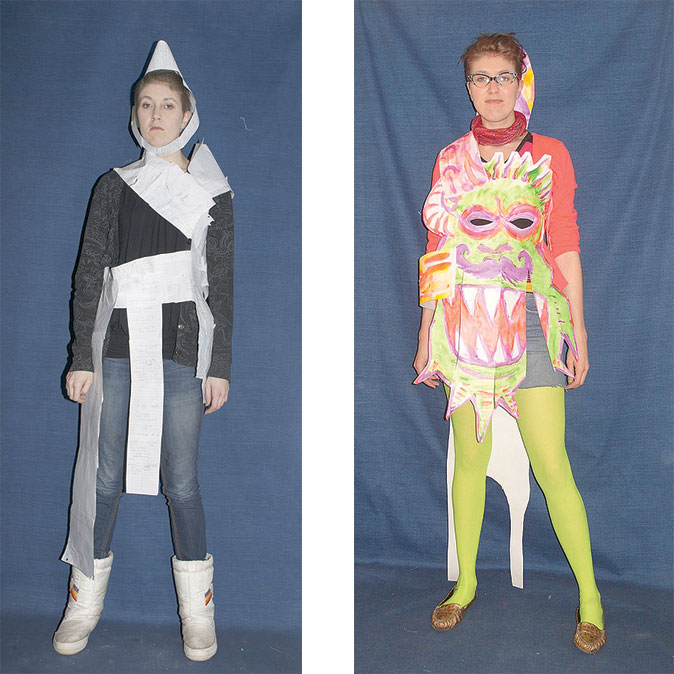 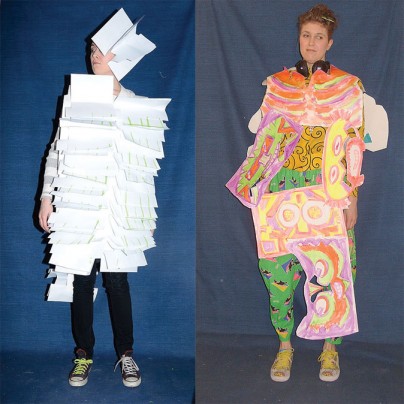 Lindsey Whittle has been making paper, vinyl and tyvek outfits every day since the Spring 2013 semester. Wearing paper draws a lot of attention, and sometimes the disruption this causes ends up creating expectations that for Lindsey can detract from the work. Lindsey felt that “Sometimes you want to create your own freedoms, but you end up getting bound by it; it ends up trapping you too, because people start to expect you to wear it and you can’t make your own decisions almost.” Lindsey has been following Andrea Zittel’s work ever since first seeing her living spaces and outfits on display in a Chelsea Gallery several years ago. When she met with Zittel at SAIC they compared notes on incorporating an art practice into daily life. Lindsey related, “I have to give myself permission to be out of the paper outfit. [Andrea] feels like she needs to keep that control, where she has to be in it all the time, even if she feels like being in just jeans and a t-shirt.” They also spoke about the future, and what it means to take your work from an academic setting to real life, which is a priority concern for a second year MFA student. “Andrea suggested that I should be reaching out to gallery owners and museum curators, and to new people rather than relying only on established relationships from the past.”