How Sound Brought Art to Life at the 55th Venice Biennale. 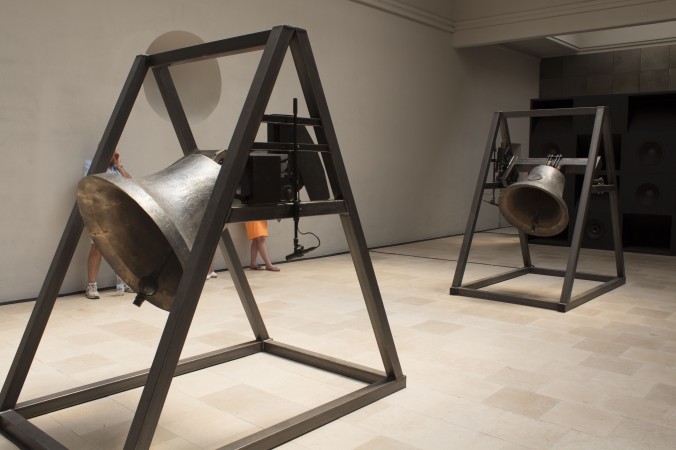 Konrad Smolenski’s installation at the Polish Pavilion, “Everything Was Forever, Until It Was No More” 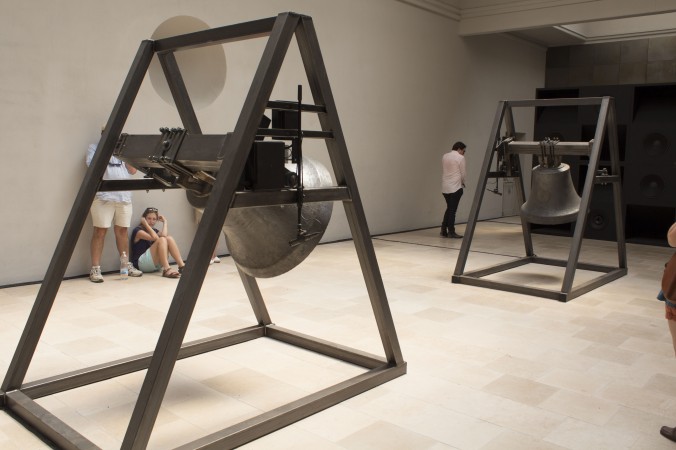 The boundaries of endurance are a fertile, if dangerous, field of play for an artist. The threshold for exultant transcendence is just steps away from a quick and decisive exit. The box of ear plugs — and stern warning that they should be used — served as an apt warning for those waiting to enter the Polish Pavilion.

The interior of the pavilion was inhabited by two massive bronze bells and a wall of speakers. The composition started as the bells began a slow transit through space, swinging to a mysterious meter. Their output: a deafening knell. At first the bells were in synch, but over time their logarithmic pattern pulled the resounding clangs farther and farther apart. The sound was broadcast through the loudspeakers and a delay effect, which created an all-encompassing drone. Between the increasingly chaotic clanging, at unendurable volume, an almost peaceful tone arose. If one imagines a sound wave and measures the distance between the peaks as a unit of time, the tone rose from the middle and provided analgesic solution to the towering sound. If one closed their eyes and bore the onslaught, it was easy to imagine time itself dissolving, “How much longer will I be able to listen to this!?!”

There is no doubt the composition — titled “Everything Was Forever, Until It Was No More” — left an indelible effect on all visitors. Not only could one hear the bells long after they stopped ringing, but the sound itself spread across the Giardini, providing a musical accompaniment for visitors near and far. The unintentional coda of the piece appears to be its utter cessation. A recent note on the Biennale website states: “Due to the fact that palpable tremors, emitted by Konrad Smolenski’s installation presented in the Polish Pavilion in Venice, are felt by the inhabitants of Santa Elena island and at the request of La Biennale, Zacheta – National Gallery of Art, the artist and curators have decided for the time being to shut down the installation.” Smolenski is billed as “a punk rock minimalist,” so perhaps nothing could be more fitting than having your show shut down due to noise violations.

The Journey From Here To Here 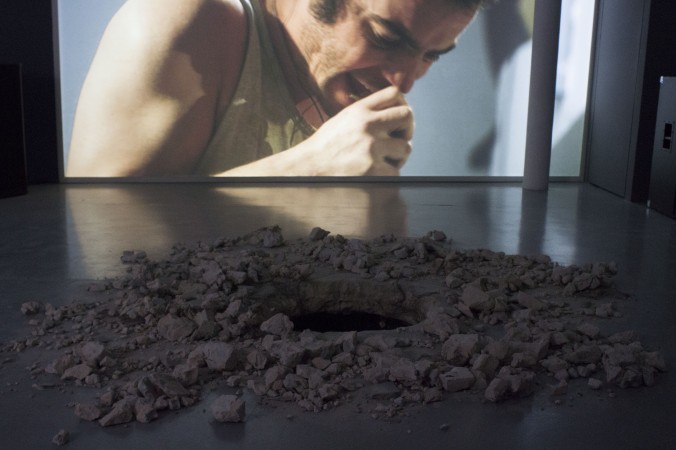 Gilad Ratman’s “The Workshop,” in the Israeli Pavilion.

A popular favorite at the Giardini was Gilad Ratman’s “The Workshop” in the Israeli Pavilion. Ratman converted the intermediary space of the pavilion into a fantasy-land where narrative, fact and art blended indistinguishably. At the entrance was a hole in the floor surrounded by rubble, the first sign that a story was ending before it began. Behind the hole a screen displayed a DJ performance, presumably recorded in the same space. Those who ventured through the varying levels and rooms of the exhibition were treated to a mix of audio-visual and plastic forms that told the story of a group of people who tunneled from the cavern-filled mountain valleys of Israel, presumably under the Adriatic Sea, into Italy and up through the floor of the Pavilion. Upon their arrival in Venice, the travelers built the sculptural busts of themselves displayed in the exhibition. 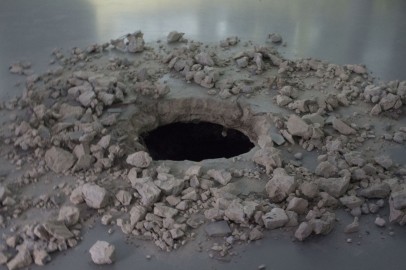 While obviously no one tunneled between Israel and Italy, that seemingly simple assumption was constantly in question. Someone tunneled somewhere, videos detailing the journey covered every wall. Someone built these sculptures, but were they built here or elsewhere and by whom? Where the same people in the videos the ones whose sculptures filled the place? If it is all a fiction, then how does one reconcile the concrete facts in front of them?

All these questions swirled in my head as I explored the space. As soon as I felt I’d understood some fact of geography or intent, the next display subverted my conclusion. I finally stopped wrestling with myself and embraced the aesthetic whole of the exhibition. Loud techno music (from video of the party when everyone arrived in Venice, naturally) kept the tone of the work playful and fun. Heads nodded steadily as we all traveled a journey no less real than the one our hosts undertook.

The History of Everything

Massimiliano Gianni’s “Il Palazzo Enciclopedico” also occupied a large space at the Arsenale. Gianni’s inspiration for his exhibition was an Italian “outsider” artist who imagined a museum that would contain all the world’s knowledge. The building was never built, but the idea of a space that housed all knowledge was the curatorial principle guiding the exhibition. This seed of an idea was displayed in one of two primary ways. The first was the exhibiting of “outsider” artists alongside better known and established artists, further erasing the false boundaries between art world insiders and outsiders. The second manifestation were works that in some way attempted to encompass the history of knowledge within themselves. Into this second category falls Camille Henrot’s “Grosse Fatigue.”

Where the Giardini branch of “Il Palazzo Enciclopedico” felt staid and museological (except Sehgal’s work) the Arsenale was festooned with multi-media projects. The most remarkable, of a strong field, was Henrot’s piece, situated in one of the first rooms of the Arsenale. Her video and sound installation, which won the Silver Lion awarded to the best young artist, told the history of the universe via narration, Henrot’s video work and a series of images taken during her fellowship at the Smithsonian Institution (itself a veritable Palazzo Enciclopedico).

It opened on a static computer desktop screen and followed an unknown hand as it navigated a series of films, websites and static images. The narrator’s voice, gentle and unimpeachable, situated safely off-screen, followed the halted metric resonance of spoken-word performance or a stripped-down Last Poets verse. The story began like all stories do: with a half-chanted, half-sung invocation of creation myths from around the world. They detailed the birth of the beginning of the universe by cementing aspects of a multitude into one, from there into the history of natural history, the birth of religion, science and beyond. Viewers were led along the march of human progress — the march of existence itself. A light breath of playfulness wed imagery and narration. Videos referenced the text and vice-versus as insights both joyful and poignant emerged and were resolved within the boundaries of the piece. In its 10-plus minutes of airtime, it treated viewers to a wild, exultant history of the world. The narrator spoke English, but the true language was one of “music, cosmology, geography.” It is the very language of existence, a universal truth borne by the universe itself.

The assembly built toward a climactic invocation of the here and now, sung carefully over a delicate parade of imagery. Then as swiftly as it began, the unseen hand closed the presentation and it was over.