A Chat With LJ Frezza From the Basement Media Festival

The Basement Media Festival is an annual celebration of lo-fi media, non-narrative cinema, and experimental film and video.  The festival was founded in Boston in 2010 by LJ Frezza and Nicholas Tamburo.  Over the past three years they have expanded the program to New York, Baltimore, and Winnipeg.

LJ was recently in Chicago showing a film at the Onion City Experimental Film festival.  He sat down with me to eat breakfast and talk a bit about the philosophy behind the festival, how it has evolved over the past few years, and how people can submit their own work for consideration.

Submissions for next year’s festival are due by December 7, 2013.  For more information, visit the Basement Media Festival website. 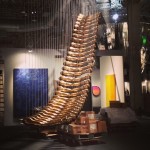