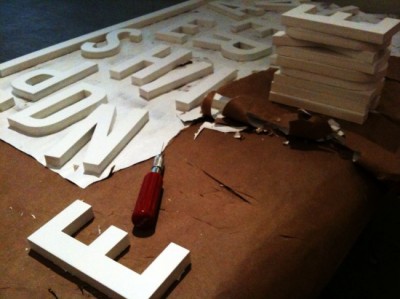 David R. Harper’s “Unrequited Needs” is equally evocative, but in a completely different way. This room-sized installation is comprised of three wall works and a sculpture, all of which are made with a striking crimson-colored felt. The sculpture is particularly noteworthy: a structure made with stark white logs, which supports a hanging, inverted group of red felt rabbits. With eloquent simplicity, the piece hauntingly explores the intersection of violence, trauma and memory.
Matthew Schlagbaum also works with a particular palette to unify two-dimensional work with sculpture. The former is comprised of 33 small, framed monochrome drawings in a variety of media, each frame and surface a distinct tint of gold. A large, boulder-like thing sits nearby, covered in painted patches of gold, bronze and copper. It’s called “Nothing This Pretty Could Be Real,” though some might beg to differ.

One work that completely stands apart in this context is an hour-long video by Benjamin Chaffee. It consists of a discussion between the artist and four participants regarding the introductory chapter to “Liquid Life,” a philosophical/sociological book by Zygmunt Bauman, which examines the fragmentation and disorientation of contemporary life (vis-à-vis the individual and the broader socio-economic sphere). The ensuing discussion documented here is profoundly thought-provoking. Significantly, each person is obscured by a sheet of wood, cut to the outline of his or her silhouette (Chaffee himself is not on screen). This clever distancing effect seems to mirror Bauman’s tenets concerning the pervasive destabilization of identity. And yet, by forcing us to pay attention to voice over appearance, the subjectivity of each participant is strangely fortified. Matters are complicated even further by the uncertainty over whether these participants are reading from a script, or voicing their own individual thoughts. 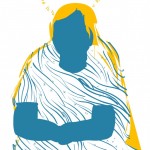 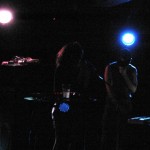