It’s summertime, and the living is easy. This sentiment seems to apply to gallerists as much as anyone else. In recent years, it’s become standard practice in July and August for commercial galleries to absolve themselves from the pressures and anxieties of single-artist exhibitions by mounting group shows with works that have been made well in advance. In many cases, this simply involves displaying various pieces from represented artists, without any concern for aesthetic or thematic unity. Often these are works the gallery already has on hand, such as unsold remnants from previous shows. In other cases, the gallery will invite a staff member or outside curator to organize a show around a particular theme or concept.

The former tactic seems to be at work in Kavi Gupta’s show, bluntly titled “Summer.” The press release simply calls it “a group exhibition of gallery artists.” Even though no unifying theme is articulated, many works evoke the mood of the long, lazy, dog days. For example, two winsome photographs by Melanie Schiff depict vacant scenes that might be inhabited by restless teens on summer break — the type looking to escape conventional community and culture. “Circle and Branch” depicts a rusty steel object in an overgrown bramble, while “The Mirror” is a double-exposure of a graffiti-strewn reservoir-turned-skatepark. Curtis Mann’s “Night Sky,” a large crepuscular grid of chemically altered photographs installed on an adjacent wall, shares a similar sense of youthful wanderlust. 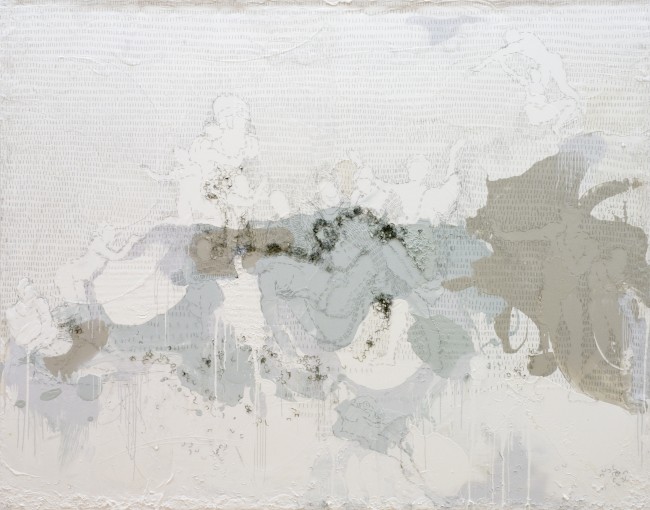 The idea of summer is also suggested in the work of Angelina Gualdoni, albeit in a completely different way. Her three large, untitled abstract paintings (made with acrylic and dye on canvas) utilize lurid oranges, blazing ochres, and soot grays to create patchy compositions that suggest the intense heat generated from both natural and industrial phenomena. Nearby, more photos by Mann function like a blast of a/c to Gualdoni’s inferno, each featuring an abstracted white form on a blanched lavender ground.

The exhibition is rounded out with a trio of spartan yet elegiac sculptures by Theaster Gates, in which common household objects are encased in blocks of pale cement, along with a trio of scrappy mixed-media paintings by recent SAIC grad Antonia Gurkovska. These works are united by an emphasis on process and materiality, and while both are compelling, they seem to belong in a different show entirely. “Summer” would have been more successful had the season itself served as an overtly unifying theme for the entire exhibition.