Interested in fostering a sense of real choice in a society where citizens are offered no viable alternatives to the two major parties?

Tired of feeling torn between the lesser of two evils? Unhappy with the policies and platform of both major candidates? Or are you just interested in fostering a sense of real choice in a society where citizens are offered no viable alternatives to the two major parties?

The Libertarian Party was formed in Colorado Springs in 1971, on the premise that both major parties had strayed from the Founding Fathers’ original intentions. Libertarians are neither conservative nor liberal, blending elements from both ideologies, promoting the ideals of liberty and freedom above all else. The official platform is socially liberal, in favor of gay marriage, drug legalization, and access to abortion, and against gun control. Fiscally, Libertarians are traditionally conservative, favoring smaller government and therefore less government regulation of business, leading them to oppose affirmative action legislation, welfare, minimum wage laws, and income tax.
There has been a Libertarian candidate in every presidential election since 1972, although their primary political successes have been in small local elections. Libertarians currently hold over 400 state and local offices, many fairly low-level positions. The party boasts 225,529 members.
In 2004, Libertarian presidential candidate Michael Badnarik secured 397,000 votes, or 0.3%. This year, the party’s candidate is Bob Barr, a former federal prosecutor and current member of the House of Representatives, although lifetime Libertarian party member Ron Paul also made a bid as a Republican during the primaries.

What is currently known as the Green Party in the United States was formed in 2001, replacing the older Association of State Green Parties which was active from 1996 until 2001. There are a few other organizations with the Green Party name, which are not recognized as the official party by the Federal Elections Commission. Rather than a single entity, the national Green Party is actually a federation formed of smaller Green organizations on the state level. It is also a partner in a larger, multinational Green movement, which includes European Federation of Green Parties and the Federation of Green Parties of the Americas. The party platform consists of ten core principles: grassroots democracy, social justice and equal opportunity, ecological wisdom, nonviolence, decentralization, community-based economics and economic justice, feminism and gender equity, respect for diversity, personal and global responsibility, and future focus and sustainability.

Since the party is primarily concerned with grassroots organizing, most of its activities take place on the local and state levels. As of May 2007, the party claims at least 230 members in elected office. Registered members total 261,754. The first Green Party presidential candidate was Ralph Nader in 1996, who went on to run again as the Green candidate in the year 2000, securing 2,878,000 votes, or 2.7%. Nader has gone on to run as an Independent in 2004 and 2008. The 2004 Green candidate, David Cobb, received only 120,000 votes, or 0.1% of the total, in part due to his decision not to campaign in swing states, where his candidacy could potentially hurt the Democratic nominee in the polls. This year’s candidate is Cynthia McKinney, a former Representative perhaps best known for a 2006 incident with the Capitol Hill police in which she claimed to have been racially profiled by security guards who did not recognize her as a member of Congress.

Founded in 1992 under the banner of the US Taxpayers Party until 1999, the Constitution party is extremely economically and socially conservative. The party platform claims to reflect the original intent of the US Constitution, the Bill of Rights, and the Declaration of Independence, and is similar to the Libertarian party in that it strongly supports small government, states’ rights, and government non-intervention. However, the party is also staunchly opposed to abortion, gay marriage, embryonic stem cell research, and illegal immigration. The party also opposes the United Nations and supports prayer in schools.
The most controversial aspect of the Constitution Party is a portion of the platform preamble which states “that the foundation of our political position and moving principle of our political activity is our full submission and unshakable faith in our Savior and Redeemer, our Lord Jesus Christ,” although supposedly members of all faiths are welcome. With only a handful of officials on the local level, the party nonetheless has impressive membership, with 384,722 registrants.

Founded by former Independent candidate Ross Perot in 1995, the party’s main platform was economically conservative and anti-NAFTA, without taking specific positions on social issues. Thus, the social libertarian Jesse Ventura and the far right-wing Pat Buchanan have called the Reform Party home. Perhaps due to the lack of a coherent system of social values, the party has been plagued in recent years by infighting and has lost the national prominence it once possessed—gaining Ross Perot 8,085,000 votes at a staggering 8% in 1996. After Pat Buchanan’s presidential bid in 2000, many of the more conservative Reform Party members have defected to the Constitution Party. Official party membership currently stands at 391,915, making it the third-largest party in the US after the Democrats and Republicans. The 2008 candidate is Ted Weill, chairman of the Mississippi Reform Party and 1996 candidate for Senate (receiving only 3% of the vote). Weill chose not to campaign as the Reform candidate in 2004, endorsing Nader’s Independent campaign instead.

While the Green, Libertarian, Constitution, and Reform are the largest third parties with the most political impact, with dozens of others running presidential campaigns, there is sure to be a perfect platform for everyone. There’s the Communist Party USA, at least three different socialist parties, and a few right-wing fringe parties such as the America First Party and Prohibition Party. There are small parties running on single issues, designed to appeal to very particular groups of voters, such as the new age Light Party, the US Marijuana Party, the Veteran’s Party of America, and the US Pacifist Party. If you are more concerned with making a statement than casting your vote for one of two inevitable winners, you might be interested in researching some of the smaller, write-in candidates who are running to find one who shares your values. 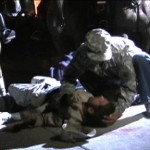 partisan, thy name is woman