‘I Was Raised on the Internet’ at MCA Chicago

The fact that I was born in 1995 marks me as a digital native. The clanging of dial-up connections and bleeps of instant message are decidedly the tones of my coming of age. However, I felt like I was trying to read raw html while viewing much of “I Was Raised on the Internet,” on view at the Museum of Contemporary Art (MCA) through October 14th, 2018. This discomfort did not detract from my interest in the exhibition, though it was certainly a blow to my ego that I wasn’t in on the trending memes or pertinent theories of post-internet philosophers.

Regardless of my naiveté, I couldn’t look away. Like the works themselves, the exhibition’s pacing mimics the experience of toggling between online windows. With nearly a hundred works dating from 1998 to the present, I could never quite decide which monitor to look at. Even when I donned headphones or sat in a dark room, I felt my attention pulled towards the oncoming commotion from another screen nearby. In the MCA’s galleries, navigating  between tabs is made more tangible. The physical objects on view are more than 1’s and 0’s, but much of the content seems as elusive and infinite as code.

Few exhibitions so accurately mirror the surreal platform of the internet as the MCA’s “I Was Raised on the Internet.” At once familiar and bewildering, the artworks and accompanying wall texts play host to the aggressive cacophony that occurs when the tools to synthesize and share found images and music tracks are widely available. It’s fitting that the exhibition continues on an online platform accessible through any WiFi connected device; at the entrance to the galleries, a collection of desktops offers visitors the opportunity to engage with the web-based artworks before venturing into the over-stimulating, attention-grabbing exhibition. 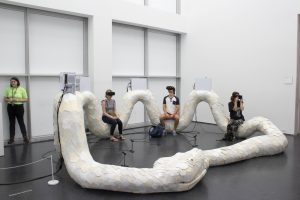 The work in “I Was Raised on the Internet” is on view thanks to the efforts of Omar Kholeif, MCA’s departing Manilow Senior Curator and Director of Global Initiatives. Commenting on his sudden resignation, Kholeif said he was leaving his position to focus on a variety of freelance projects, including the Sharjah Biennial, the Victoria – the Art of Being Contemporary (V-A-C) Pavilion at the 58th Venice Biennale, and several upcoming publications.

Though his name isn’t on much of the press material, I noticed Kholeif’s influence, alongside that of curatorial assistant Nina Wexelblatt and curatorial fellow Jared Quinton, particularly in the selection of artists for this exhibition. Remnants of Kholeif’s previous shows, such as “Electronic Superhighway” (2016), at Whitechapel Gallery, are tucked into the MCA exhibition. A quick glance at the respective checklists of “Electronic Superhighway” and “I Was Raised on the Internet” show that several works reappear from the former in the latter. With these exhibitions as well as publications on the subject, Kholeif  has participated heavily in the conversation surrounding artists’ roles in internet culture. In a panel discussion at Art Basel Miami on art and the internet, Kholeif said, “The internet acts as a social construct. Artists are not interrupting, rather they are participants.” The artists in “I Was Raised on the Internet” are no exception to this.

In that same panel, Kholeif noted that the artists in this exhibition“reveal the interior contradictions and social and political implications of the internet.” He highlighted the work BEFNOED (By Everyone, For No One, Every Day) by Eva and Franco Mattes as an example of this observation. Two flat-screen monitors press together along their top edges, forming a tent on the gallery floor. The space beneath them reflects the glow of their screens, though the content is obscured until viewers realize they are meant to scoot into the little shelter. There was just enough room for me to slide up to my shoulders in the tent to view the videos playing across the screens.  I looked up at the apex and turned my head from side to side as strangers saluted me with a bucket on their head or poured water over a fish strapped to their skin with duck tape. These videos are culled from the artists’ collection of performances by individuals they hire via online platforms to perform instructions the artists request. Viewers then see these instructions enacted by the anonymous performers in BEFNOED. You are implicated in this performance, which here is synonymous with participation. By watching the works you challenge the “FNO” in BEFNOED. The work is no longer For No One. This performance is for you.

The first rooms of the exhibition felt like familiar territory.  The work was thematically organized around the declarative curatorial heading “Look at Me”:  the shifting hotbed of identity politics, with the sometimes narcissistic, sometimes philosophical breakthrough reflections on the self that characterizes the internet. The exhibition moved through the additional themes “Touch Me,” “Control Me,” “Play with Me,” and “Sell Me Out.”

Artist Amalia Ulman positions her series “Excellences & Perfections” at the intersection of these demands. A durational performance captured in slightly out-of-focus Instagram portraits of Ulman, the picture of Eurocentric beauty, “Excellences & Perfections” questions self-presentation on social media. Ulman’s work makes a spectacle of the social media pageant. Caricaturing a social media starlet, Ulman poses in lingerie, pouts her lips in mirror selfies, and flaunts a shopping spree with a caption that reads “Small presents are the best gifts. Paying attention to details. #friends #family #birthday #sister.” However, I found much of this performance said nothing that any other social media account or long blog post doesn’t already say: that social media allows us a tight control over our presentation to the world via a scrollable feed. Ulman’s performance may be art, but it is no more compelling than any other Instagram confessional. The work feels so self referential that we may as well exhibit anyone’s Instagram account; what could be biting commentary on identity on the internet is lost in the fact that the work occupies the same platform as any Instagram account. Granted, that appears to be the the artist’s intent, but it makes for uninteresting conversation about self presentation in the internet-age.

I was pulled into the exhibition’s first rooms by Evan Roth’s “Female, 34, NASA scientist, College Park, Maryland (March 2013).” The weighty, chaotic scroll suggests hieroglyphics on papyrus, updated to include memes and news headlines. Part of Roth’s “Cache Portrait” series, the work is a composition of every page that the titular 34-year-old female NASA scientist visits on the web over the course of a day. This collection, which Roth describes as “memories never intended to be shared,” composes a more intimate portrait than flesh ever could. This is the naked mind recorded; rather than implying surveillance, as much of the works in “I Was Raised on the Internet” do, Roth composes a piece that unfurls as if an intimate diary tumbled off the bedside table and onto the floor.

Similar to Roth’s piece, though with an added tone of menace, Andrew Norman Wilson’s expose-like video “Workers Leaving the Googleplex” reveals the parts of the internet that remain invisible. The video, displayed on a single monitor with headphones, shows long shots of office buildings and their occupants coming and going. This ordinary scene is disturbed by Wilson’s narration, which recounts the events leading up to his firing from a job at Transvideo Studios, a company that outsourced Wilson’s labor to Google. Ostensibly, he was fired because of his illegal filming of Google employees who scan pages for Google Books in a particular office building from the odd hours of 4:00am to 2:15pm. Google’s condemnation of Wilson’s filming as illicit implies concealed criminal activity, some nefarious underbelly of the corporation.

The long shots of small crowds coming and going between buildings resemble Louis Lumière’s early film “Workers Leaving the Lumière Factory.” Rather than the remarkable outpouring of figures in Lumière’s film, which serves as an ode to industrial innovation in both the subject of the factory and the futuristic film media, Wilson’s video serves as visual white noise, a backdrop to his shocking narrative. This stock photo-esque cinematography in “Workers Leaving the Googleplex” critiques the epicenter of internet industry and becomes both a visual and verbal transcript of what occurs when the internet’s ubiquitous hub is questioned. Such work would be at home hung on the gallery wall or exhibited as courtroom evidence.

The rationale for keeping the visual a part of Wilson’s narrative could be its mysterious origins. In the piece, Wilson describes how he lost one video and had to give the other to his supervisors. The video we see here thus becomes part of the mystery as well: Is this the lost footage? New contraband footage? A re-enactment? Where is this video coming from? Despite the puzzle of the video, Wilson’s matter-of-fact telling of his firing brings the exhibition back to the world outside the galleries. How many of us will use Google’s search engine to find the exhibition’s online platform, or find lunch nearby?

Returning to Kholeif’s remarks on artists’ participation in the internet’s new social norms, I am left wondering if any one of the myriad of works necessitating audience engagement in “I Was Raised on the Internet” are interventions in a manner outside of what the internet alone implores of us: to “Look at Me” “Touch Me,” “Control Me,” “Play with Me,”  or “Sell Me Out.” These declaratives are just as easily reflections, bland comments on the collected chaos of the online world. However, the works at the MCA, from Roth to Wilson, exemplify the capability for digital work to bring the intangible moments of the internet into the immediate physical realm. Scooting under screens to see strangers does make the internet something as solid and sticky as a fish duct-taped to your chest.  Here, the MCA has more than an exhibition of internet-based art; it solidifies the internet’s ephemeral toggling into a cohesive moment. Or, at least I finally felt I could take comfort in my own confusion if an Instagram post is now synonymous with artistic genius.

Arts & Culture, Uncategorized ‘I Was Raised on the Internet’ at MCA Chicago
« Previous Story 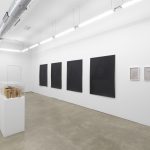