On the evening of Wednesday October, 15th 2008, a demonstration outside of Hofstra University during the third and final presidential debate led to the brutalization of protestors, many of whom were veterans of the wars in Iraq and Afghanistan.

On the evening of Wednesday October, 15th 2008, a demonstration outside of Hofstra University during the third and final presidential debate led to the brutalization of protestors, many of whom were veterans of the wars in Iraq and Afghanistan.

Protestor Nick Morgan, a 24 year-old veteran of the Iraq war who suffers from post-traumatic stress disorder, was nearly killed when he was thrown to the ground and trampled by a police horse. The horse stepped on Morgan’s face, shattering his lower orbital, and rendering him unconscious.

Morgan is a member of the Iraq Veterans Against the War (IVAW), an organization whose membership, according to member Matthis Chiroux who was present at the demonstration, consists of roughly 13,000 veterans and service members who oppose the war in Iraq. Chiroux says the organization is “for the troops, by the troops,” and that they strive to offer a more “broad account of a war largely misunderstood or ignored by the American public.”

Planning for the demonstration in Long Island began during the Republic National Convention. The IVAW had announced in a statement issued to CBS prior to the debate at Hofstra, that there were two veterans who wished to ask one question each of both presidential candidates John McCain and Barak Obama during the televised debate. They wanted to question McCain about why he has not supported further funding for VA hospitals, and his stance on ending discrimination against homosexuals in the armed services. The statement issued to the IVAW said that if they had not received a response by 7 pm, on the evening of the debate, that the veterans would enter the debates anyway, to insure visibility of their organization, even if their questions were not addressed.

According to Chiroux, protestors “marched peacefully to the gates” outside of the Hofstra building at Seven p.m. “Eight veteran’s and three civilian supporters were immediately arrested. Riot police came in with riot shields began charging protestors onto the sidewalk. Protestors did not resist. …[the police] used horses to charge the protestors, which is, I believe, in and of itself a violation of their own protocol.”

Nick Morgan was among those injured by a horse ridden by Officer Quigliano. According to Chiroux, Quigliano’s horse injured at least three other civilians, and three veterans. Other protestors were not allowed to tend to Morgan while Quigliano’s horse stomped only inches from where he lay.
Chiroux says that Morgan was then “jostled and handcuffed by the police. They did this knowing he had a potential head injury. One thing we learned in combat is that you don’t jostle someone with a head, neck, or back injury.”

Morgan, who was barely conscious, was denied medical attention until he could “ask for it himself.” Eventually, Morgan became cognizant enough to request medical attention, at which point the officers “begrudgingly took him to the hospital,” according to Chiroux.

Chiroux said that Morgan was handcuffed to a gurney, and taken to Nassau County hospital where he was diagnosed with a fractured lower orbital, “prescribed nothing more for his pain than Motrin,” and was immediately returned to police custody where he sat with other detained protestors for five hours.
While detained, Chiroux said the police officers “harassed and hazed the hell out of us.” According to Chiroux, female detainees were subject to sexual harassment, all detainees were repeatedly called “everything from cowards to idiots,” and a knife was repeatedly flicked in the face of James Gilligan. “Gilligan served in Afghanistan, Iraq, and Guantanamo.”

Chiroux did acknowledge that IVAW’s relationship with police departments elsewhere in the country (he cited the Police in Denver, and in St. Paul) has been “great.” But the conduct of the police in Long Island has “shocked us.” Chiroux said, “It shocks me to wonder: if they treat uniformed veterans this way, how must they be treating those in their community?” He went on to say the he felt deeply unsettled by the idea of a police force “who do not feel basic human rights apply to their duties.”

The case will be taken to court on November 10th, 2008, in Hampstead, New York. “November 10th is the first step,” says Chiroux. “We are going to push back against Americans suppressing Americans.”

No mainstream media outlet has covered this story, nor have either of the presidential candidates publicly acknowledged this event. Chiroux’s feeling is that, “this cannot go unaccounted for. At the very least, Quigliano must answer for what he’s done. The third [presidential] debate was dedicated largely to ‘Joe the Plumber.’ Meanwhile, Nick the vet was outside getting trampled.”

Presently, Nick Morgan is looking to alleviate the cost o fhis medical bills. He has undergone one facial reconstructive surgery, and is awaiting several more. His speech is slurred, and his vision is blurry.
When asked about his personal opinions regarding the upcoming presidential election, Chrioux said, “Barak Obama depresses me, and John McCain scares the crap out of me.” Chiroux cited his “[discomfort] with Obama reframing the Afghanistan occupation as a success,” and that a “John McCain presidency…Just scares the crap out of me,” he repeated. Chiroux did acknowledge, however, that the Iraq and Afghanistan Veterans of America have assigned letter grades to both presidential candidates. John McCain has received a rating of “D-“, and Barak Obama has received a “B+”.

Chiroux says that he hopes the American public recognizes that, “one way or the other, one man is not going to fix all of their problems,” and that truly constructive change will, “come through broader organization…and true democracy guiding the policies of this country. It’s going to take work from every American to insure our concerns are addressed. People can’t forget that in the election, and they can’t forget that in the months and years to follow.” 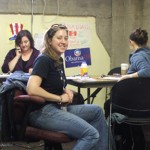