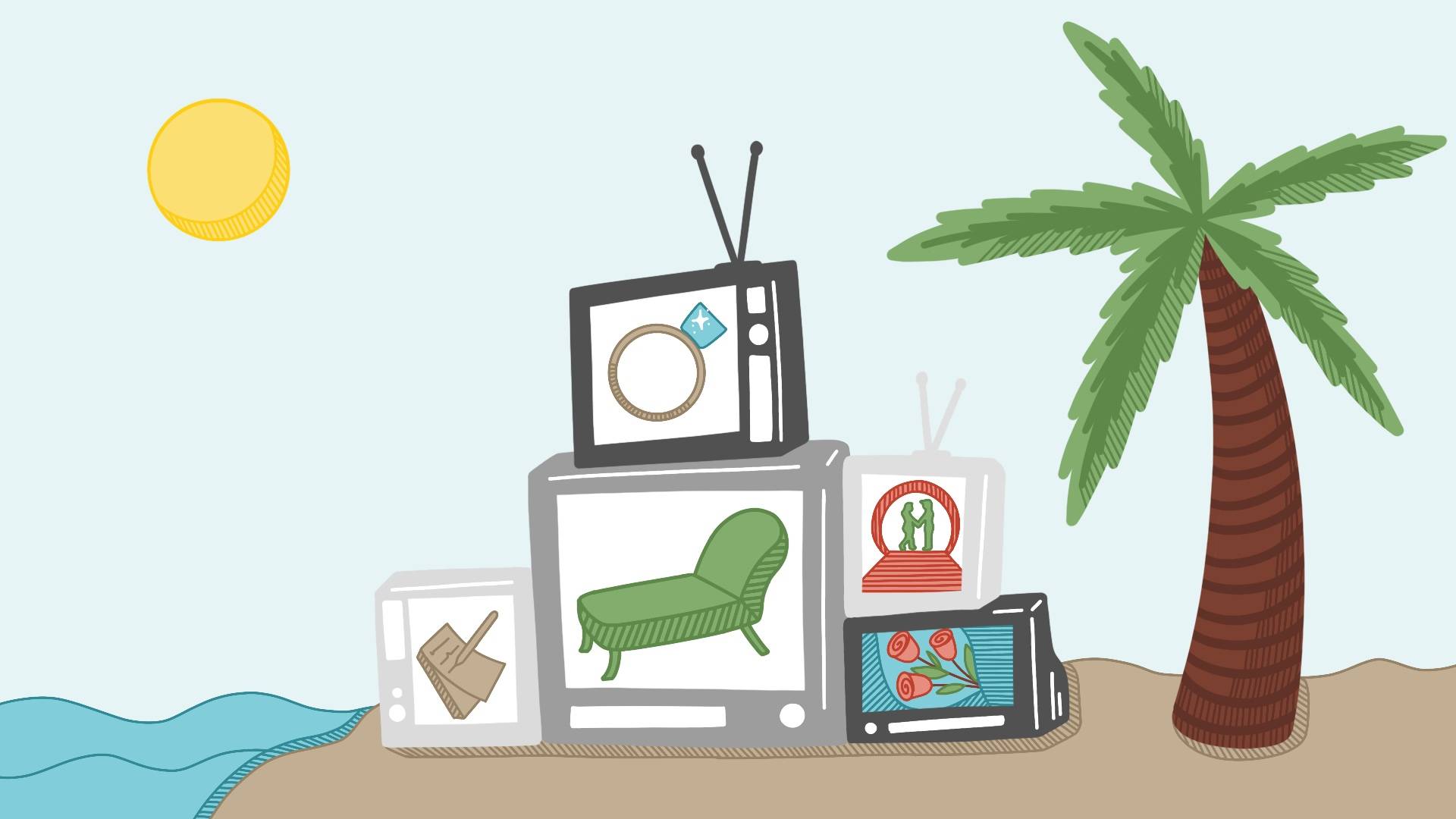 I donʼt eat meat or animal by-products. I gave up alcohol a few years ago, and I finally broke up with caffeine this month. Iʼve never liked cigarettes, and I donʼt have a sweet tooth. I tried gambling once, lost, and never did it again. If youʼre starting to worry that I donʼt have a vice, fret not my friend — I do have a dirty little habit, and she is binging reality dating shows.

I have been a closeted member of “Bachelor Nation” since high school. During the pandemic I sat on the couch and gobbled up both seasons of Netflixʼs “Love Is Blind” and “Too Hot to Handle” in a shamefully short amount of time. I recently joined the “Love Island” family.

I love the drama. I love watching people drink too much and be too honest with producers. I love watching people argue and manipulate and crash and burn. I love their cheesy little monologues. I love the villains. Most of all, I love reunion episodes, when we watch everyone hash out all the aforementioned drama and spill extra tea just for fun. On the second season of “Love is Blind,” there was a particularly infamous vet named Dr. Abhishek (Shake) Chatterjee. On the show, Shake made a number of particularly cruel comments about his fiancé’s appearance. Understandably, Shakeʼs co-stars criticized his behavior. One comment in particular that caught my attention was made by his castmate Iyanna: “Shake, one thing — I think you would seriously benefit from seeing a psychologist and figuring out some coping skills to navigate relationships as a narcissist.”

Iyannaʼs comment may be masquerading as concern, but “suggesting” someone go to therapy while youʼre criticizing their character is far from kindness. This moment is an example of a larger trend Iʼve noticed recently. As a culture, weʼve made great strides in mental health awareness. However, if we still believe that “you should go to therapy” is an appropriate insult, there is still a lot more work to be done. As a future therapist, a neurodivergent person, and a participant in lots of therapy, I think thereʼs a lot to unpack here.

Mental illness has been historically hidden, shamed, and stigmatized. If youʼre looking for an artistic depiction of this, look no further than the 1980 drama film “Ordinary People,” a story about a nuclear family in the suburbs of Chicago who loses their oldest son in a tragic accident. Throughout the movie, the younger son is plagued with survivorʼs guilt, depression, and most likely post-traumatic stress disorder (PTSD). He is hospitalized following an attempt to take his own life and visits a therapist after he is released to cope with his grief. At a party, the father reveals to some friends that their son is in therapy. On the drive home, the mother is furious with her husband for airing their “dirty laundry” to the whole neighborhood. This fear of being “outed” and the idea that only “crazy” people go to therapy is a theme that persists throughout the film.

“Ordinary People” was released over forty years ago, and since then we have made a lot of progress towards destigmatizing mental health treatment. Nearly all of my friends have therapists. Men on Bumble and Hinge (dating apps) list their therapy appointments as pros on their profiles. I hear advertisements for virtual therapists on my morning podcasts. Clinical terminology has entered the public vernacular through pop psychology: Ever hear people talk about narcissists, attachment, or repression? There are entire online communities devoted to neurodivergent awareness on TikTok and  Instagram as well. (My “For You” page on TikTok is full of them.)

But — weʼre still shaming people by telling them they need to get help. Something is really wrong with you, we say. “You need therapy.”

The reason I am targeted by neurodivergent content on social media is because I am neurodivergent with a capital N, although I didnʼt know that until I was 28. I spent my aggressively “normal” childhood plagued by symptoms of my mental illness, but I had no idea that my brain was “different.” I thought everyone had pathological fears of blood, needles, and vomiting. I didnʼt find my “little quirks” to be strange, which
included compulsive avoidance behaviors, rigid eating habits, and extreme perfectionism. I thought my excitability, fidgeting, impulsivity, absentmindedness, difficulty focusing, and forgetfulness were cute little personality traits. When I finally started therapy, I was diagnosed with obsessive compulsive disorder (OCD), an anxiety disorder defined by hyperfixation on specific anxious triggers (obsessions), and repetitive neutralizing or avoidant behaviors (compulsions). Two years later when I began my graduate program studying Art Therapy
and Counseling, I took psychopathology, where I realized that the symptoms of attention deficit hyperactive disorder (ADHD) felt a little too familiar.

Living with undiagnosed mental illnesses led me to develop a variety of coping skills to navigate daily life without support. Keeping meticulous lists, practicing time management skills, and my ability to write a thirteen-page paper in two hours before it was due allowed me to make it through high school and college. Suffering with my OCD symptoms in silence by forcing myself to do things that made me
feel scared or uncomfortable evolved into an organic version of exposure therapy, which is one of the main treatments clinicians use when working with that population.

I am much happier now that I am getting help from real professionals. I am grateful for my diagnoses. They help me to understand myself better and make me feel less alone. However, they have also made me acutely aware of how skewed public perception of mental illness is. Collective ideas about specific disorders tend to reduce them to stereotypes. Prior to receiving my diagnosis, my knowledge of OCD was entirely based on an episode of MTVʼs “True Life” I watched in seventh grade. Ironically, the strategies I adopted while living with undiagnosed ADHD are often conflated with OCD symptoms. When I tell people I have OCD, they nod at my color-coded planner or my tidy home. People wonder if Iʼm a germaphobe washing my hands one hundred times per day. I still hear people use OCD as an adjective or verb at least once per month. I also recognize the privilege of having an anxiety disorder that is widely viewed as a set of innocent and quirky traits. Personality disorders like borderline personality disorder or psychotic disorders like schizophrenia are far more deeply marginalized, for a lot of reasons that I would need another essay to fully dive into.

Returning to reality dating shows, Iʼve also witnessed neurodivergent stigma present in dating and relationships. How often do men call their ex-girlfriends “crazy?” If you have watched the most recent season of “Love Is Blind,” you probably remember the gasp-worthy moment that Cole asked Zanab if she was bipolar. The thing is, you canʼt tell someone has a mental illness just based on their actions. Or because they have mood swings, or if they have a temper, or if theyʼre indecisive. We need to collectively agree to stop “diagnosing” people with a mental illness when we are upset with their behavior. So itʼs officially time to cease calling your ex-boyfriend a narcissist. It requires years of education, training, and practice to diagnose people with mental illnesses, and even then, professionals donʼt always get it right.

To clarify for those who donʼt know, bipolar disorder is a mood disorder that affects over three million people. The name, “bipolar” is a precise description of the symptoms, as bipolar disorder is characterized by periodic phases of mania and depression. You probably know at least one person who has bipolar disorder, and yet discriminating against potential partners because of mental illness isnʼt unique to men dating women either. Iʼm in a Facebook group called “Are We Dating the Same Guy?” where women post safety tips and photos of men they have deemed dangerous. A person in the group recently questioned if they should date someone who has bipolar disorder. If that sounds reasonable to you, consider this: Would you hesitate to consider dating someone with a chronic illness like diabetes or asthma?

Mental illness presents differently in every person. Having OCD doesnʼt mean I know anything about another personʼs lived experience of the same illness, and every diagnosis contains a spectrum of severity. Neurodivergent people also carry a range of beliefs and feelings about Diagnostic and Statistical Manual of Mental Disorders diagnoses, and I certainly canʼt and do not speak for everyone. I am really open to disclosing and talking about my mental illness. Other people prefer to keep their experiences between them and their psychiatrist, family, or therapist, and thatʼs fine too. Finally, and obviously, neurodivergent people are just people.

Living with a mental illness can be really hard. Sometimes, I feel “crazy.” Other days, I feel totally “normal.” I feel like my neurodivergence has provided me with a lot of strengths too: I am really creative and detail-oriented. When I hyperfixate on something, I can complete a task in half the amount of time it would take other people. I am pretty organized. But letʼs be real, thatʼs probably because Iʼm a Virgo.

I am a neurodivergent person and a future therapist, and I will go to therapy for the rest of my life. The only bad thing I have to say about therapy is I wish I had started going sooner. If you have been feeling blue lately, or burnt out, or you have something you need to work through, I want you to know that therapy is magic. It is bananas to me that anyone would consider therapy as shameful, or use it to
put someone down. I love therapy more than I love reality television.

So, in conclusion, you should go to therapy. (And I donʼt mean that as an insult.)

Jamisen Paustian (MAATC 2024) colors more than most adults, but she rarely stays inside the lines.

Part-time Faculty at SAIC Overwhelmingly Vote to Join the...

One Response to The Girl Who Cried Narcissist