Part-time Faculty at SAIC Overwhelmingly Vote to Join the Union

Out of 410 votes that were counted yesterday, 92% of faculty voted YES. 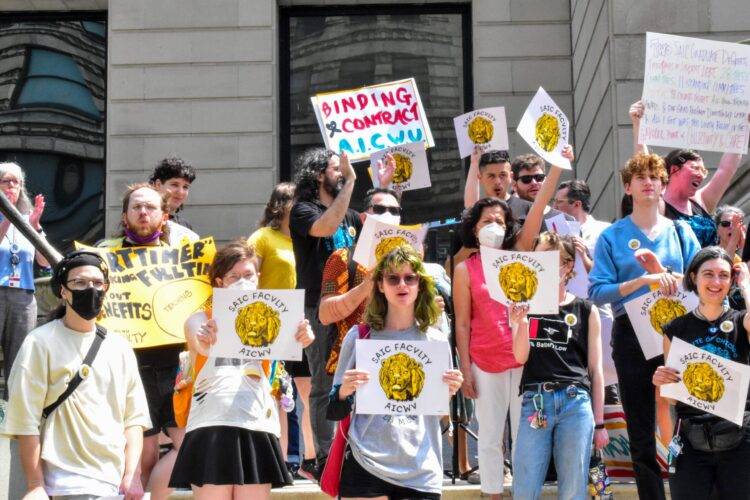 Supporters gather during a rally organized to announce the intention of non-tenure-track faculty members to join Art Institute of Chicago Workers United union on May 10, 2022. Photo by Nester Kok

The National Labor Relations Board (NLRB) announced the results of the election on Tuesday, Dec.13.

According to AICWU, out of 410 votes that were counted, 377 voted YES, 33 NO, along with 21 challenged ballots, and two invalid votes.

Founded this year in January, AICWU already represented the staff at both SAIC and the Art Institute museum. Currently, under the union’s umbrella, their two bargaining units will now be joined by a third group consisting of NTT faculty members.

SAIC is not the only academic institution where talks about forming a union of staff members have taken place. In recent years, many students and teachers of different universities in the U.S. and even in different parts of the world, have started negotiating with academic institutions by forming unions.

In May 2022, NTT at SAIC expressed their intention to form a union. However, when they went to the school administration in September to ask for voluntary recognition, their request was rejected. They then petitioned the NLRB for an election, and  on Nov. 8, the NLRB mailed ballots to all NTT faculty.

“For many of us, this marks a moment we’ve hoped for and worked toward for years, but for ALL OF US, this represents something deeply significant to our community: alongside our staff colleagues at the School and the Museum and like the ’93 and ’98 Bulls, we’ve achieved an #AICWU Three-Peat. This hand-delivers a crystal-clear message to our President, Provost, and Board: We know our worth; we know how critical our labor (and investment in our livelihoods) is to our institution, and we know it’s time to put it in writing,” wrote AICWU on their Instagram account after the results were announced.

In a statement provided by SAIC’s Director of Communications Bree Witt, the school said that they intended to hold talks with the union “to negotiate an initial collective bargaining agreement that best meets the needs of all parties to the contract while allowing us to continue to deliver on our mission of providing a world-class art and design education.”

The faculty union said in the coming weeks their goal is to start preparing for the first bargaining meetings with SAIC management and elect the bargaining committee members who will represent them during negotiations.

“We’re not only celebrating raising a unified voice in conversations that determine our working conditions, but what makes that voice actionable: hundreds of individuals standing alongside one another, ready to take the tenacity of our collectivity to the bank, and return power to the people who make SAIC’s mission — and world-class reputation — possible,” wrote AICWU.

Listen to Your Unicorns