Moving Pictures: Looking Through The ‘Glass Onion: A Knives Out Mystery’

A sharp sequel to “Knives Out” (2019) and an even sharper murder mystery the the midst of the COVID-19 pandemic. 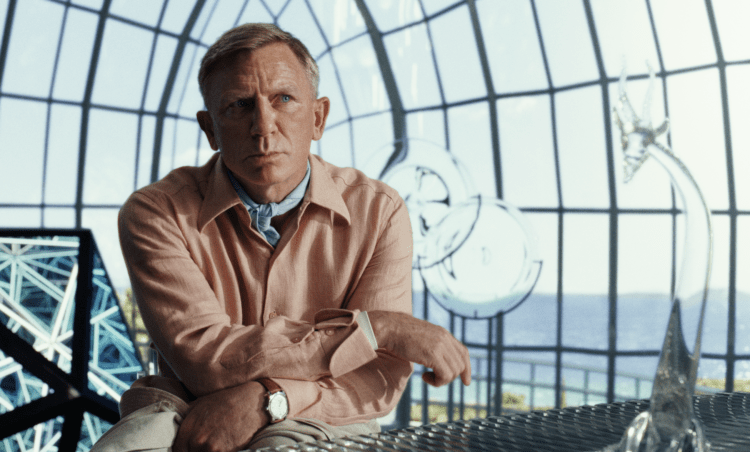 Rian Johnson’s “Knives Out” (2019) was a smash hit, a massive departure from his prior work of the lightsaber duels in “Star Wars: The Last Jedi” or the high concept, time-traveling science fiction of “Looper.” The most outrageous things about “Knives Out” was its all-star cast and Daniel Craig’s “southern” accent as lead detective, Benoit Blanc. But that didn’t stop Johnson from bringing the same level of inventiveness he brought to his other films, this time dabbling not in time travel or space monks, but with the form of the murder mystery.

In the first 15 minutes of “Knives Out,” Johnson told us exactly how the murder was done, and giving us the culprit. He then spent the next hour pulling the mask from our eyes, only to place another mask on our face, spin us around, and then show us the truth. It wasn’t only a box-office hit, it was a successful formal experiment, willing to go into the anatomy of the murder mystery and scramble its insides.

When “Glass Onion: A Knives Out Mystery” was announced with its equally prestigious cast, the question was could Johnson do it again? Could he successfully tear apart the formula and reassemble it? Could he still surprise us not only with the mystery itself, but with how it’s told?

I have to admit, I had my doubts. For the film’s first act, I was charmed by its visual splendor, its delightful costumes, its hilarious dialogue, and its terrific over-the-top performances. But I wasn’t quite as engaged by the mystery of it all, it still felt formulaic, like an entertaining episode of Benoit Blanc’s exploits, but missing that vital Rian Johnson spark.

I should have had more faith.

Because as expected, Johnson pulls the rug out from right underneath us, bringing his own special spin to the twist. It’s a wonderful tribute to the form, that honors its oddness and celebrates its idiosyncrasies. It may not be for everyone, because that same twist may strike some as too meandering for the otherwise propulsive plot.

Personally, I found it immensely satisfying, because again, it’s not about the who of the murdering, but how we find out. I knew I was in the hands of someone who cared far more about the genre of the murder mystery than I ever would. It’s that kind of love that makes “Glass Onion: A Knives Out Mystery” such a delight, packed to the gills with details, color, and jokes. Many, many jokes.

Johnson refuses to lean into the macabre aspects of the murder mystery: the ruminations on mortality or the darkness of the human spirit that many a Swedish crime procedural is built upon. Instead, his mystery is delivered with a bounce, propelled by humor and verve, all powered by its excellent cast.

Kate Hudson is hilarious as the flailing influencer, perpetually with her foot in her mouth, convinced being unfiltered is a worthy personality trait. Jessica Henwick is a delight as Hudson’s  plate-spinning assistant, who delivers probably the film’s funniest line, if not one of the funniest lines in cinema this year. Dave Bautista has proven time and time again that he holds immense comedic potential, this time as a bellowing meninist Twitch Streamer. Janelle Monae, unlike Bautista, puts in a surprisingly stoic, subdued performance especially considering her usual persona, acting as the film’s voice of reason, Andy. There’s two other voices of reason, the scientist played by Leslie Odom Jr., and the politician played by Kathryn Hahn, both of whom inject a little insidiousness into each line. And all of them are up against Miles Bron (Ed Norton), this film’s version of Elon Musk, though presumably when Johnson was writing the script, the character was probably intended to be its Jeff Bezos. Ed Norton as Bron is smarmy, false, and convinced he has charisma, of which, he has none.

Bron is  the exact opposite of Benoit Blanc who Craig makes such fun, that I could watch ten minutes of Blanc ordering takeout. Yes, the accent is ridiculous, but it also has a specific function: it brings us into this film’s reality. We’re now in a world where this voice could be normal, where cars can sit on floating platforms, where mysteries can be solved, where justice can be found, if you scrape and fight for it. It’s a terrific fluid performance by Craig that I hope he returns to as many times as he played his emotionally constipated Bond.

Despite being made in 2021, Johnson chooses to place “Glass Onion: A Knives Out Mystery” firmly in 2020. Characters fear the pandemic, wear masks outdoors, and are probably meant to be quarantining instead of taking an elaborate vacation to Greece. It’s a bold choice, which causes the film to lean more topical than the first, which was already a stealthy commentary on immigration in the USA. It’s hard to say whether this choice will be rewarded or punished, in say, five years from now, when our relationship with the pandemic will presumably have evolved. However, what this could also signal is Johnson’s intentions for the franchise, that perhaps each iteration of Benoit Blanc’s adventures will be a time capsule for the present moment. It’s an exciting idea, especially since most modern movie franchises exist in parallel to our reality. It’s impossible to know how the film’s particular perspective on this moment will age with time. But I doubt that will affect much of your viewing experience if you watch it when the film hits Netflix on December 23rd.

Yes, you’ve read that right. This film is a Netflix release. And Netflix being Netflix, decided to release the film in cinemas prior to its streaming release for a limited run. I can’t state enough how big a mistake I think this is for Netflix, primarily because this film is an immense crowd pleaser. It’s the type of movie that rewards being watched with a massive group of people, laughing and gasping at its twists and turns. There’s a bit of a fallacy that’s been floating around; that a film is only worth watching or screening in cinemas if it has a bold visual spectacle, typically characterized by heavy CGI or explosive effects. But movie-watching isn’t just about the visuals, or the sound, or the popcorn. Sometimes, it’s about the communal experience of strangers discovering something together, a joyous activity multiplied tenfold when that mystery is being doled out by Rian Johnson.

All of this has nothing to do with “Glass Onion: A Knives Out Mystery” as a film and everything to do with its release strategy. So if you have the opportunity, and it is safe to do so, I highly encourage you to watch “Glass Onion: A Knives Out Mystery” in cinemas, and lose yourself in its labyrinth of pastels, sunsets, lies, secrets, and its truth. And as Benoit Blanc says, getting to the truth isn’t all that difficult. What happens next, that’s what is up for grabs.

Moving Pictures: ‘Black Adam’ and the Hierarchy of Mediocrity