How the perfect needle drop can elevate a film from good to great, and how the best auteurs choose their soundtracks. 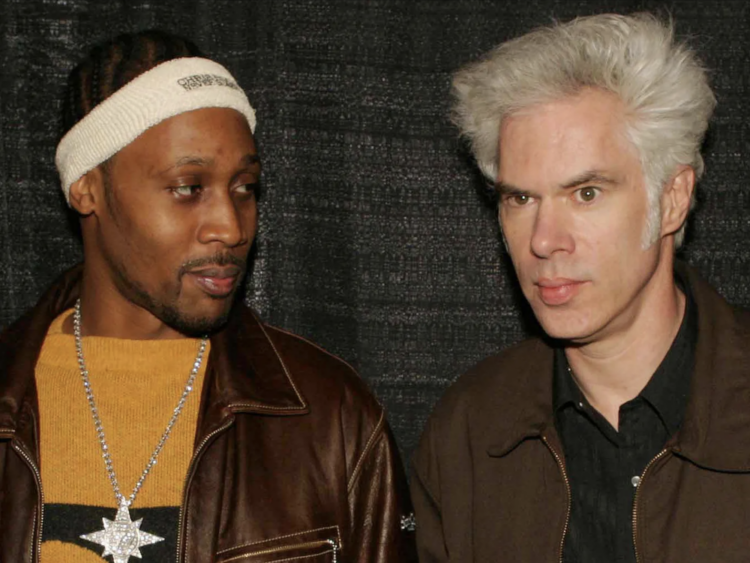 RZA and Jim Jarmusch in 2004. Photo by Steve Jennings.

Movie soundtracks can make or break a film. Imagine a Scorsese film where instead of the Rolling Stones, some knock-off riff the studio made plays over a pivotal scene. Imagine “Blue Velvet” with Dean Stockwell singing an 80s pop ballad instead of Roy Orbison’s “In Dreams.” That perfect needle drop can elevate a movie to the next level. But some directors take it one step further. The collaboration between a director and a musician is not an uncommon occurrence. Getting a popular artist to make a song for your film is a surefire way to get some extra eyes on it, but commercialism isn’t the only benefit here. Some films are so intertwined with their soundtracks, and the artists that appear on them, that you couldn’t imagine them being separate. Let’s dive into a few.

Gus Van Sant’s “Good Will Hunting” is a late 90s classic. A fantastic performance by the late, great Robin Williams, a great script from a young Matt Damon and Ben Affleck, and underrated performances from Stellan Skarsgård and Minnie Driver. It’s a great film about male friendship, vulnerability, and realizing what you want to do with your life. But at face level, the movie can come off as very bro-ey, and definitely is at some points. The Boston accents, the constant swearing, the two scenes that take place at batting cages. This movie could have very easily become “The Waterboy” except with a janitor as the main character, but it doesn’t. You can certainly say Van Sant’s masterful direction, and Damon and Affleck’s excellent script make sure it walks that line, and that’s all true. But in my opinion, the soundtrack brings in that vulnerability the movie needs to keep that balancing act.

The majority of the soundtrack is made up of songs by a musician who has unfortunately passed on — Elliott Smith. Smith is the opposite of a macho man. He writes very painful songs that are nonetheless beautiful. Van Sant uses Smith’s music masterfully in the film. When the film goes to emotional places; when the facade is dropped and we see the pain that Will carries with him, the music kicks in. When Will is at his lowest and breaks up with Skylar over the phone, Smith’s “Angeles” kicks in, and it hits you like a ton of bricks. Not only is this moment fantastic, it transitions beautifully into the next scene — the most impactful scene in my opinion — where Chuckie tells Will that all he wants is for him to get out of Boston; get out of the life he’s leading. He says, “You know what the best part of my day is? It’s for about ten seconds when I pull up to the curb to when I get to your door. ‘Cause I think maybe I’ll get up there and I’ll knock on the door and you won’t be there. No goodbye, no “see ya later”, no nothin’. You just left. I don’t know much, but I know that.” This is Will being pushed to lead a new life not by those from outside his world, but from his best friend. It’s heartbreaking, and Elliott’s music is the perfect transition to this scene.

Van Sant uses the music of Elliott Smith not only to set the mood for his film, but as a fantastic transitional device. Smith’s music lulls the audience right into a space where Van Sant can break their hearts. “Good Will Hunting” is a beautiful film, and without Elliott Smith’s wonderful music, I don’t think it would be. Smith is the bedrock of the movie. And although he tragically passed away in 2003, I hope he knew how much his music meant to everyone, especially those who found it through “Good Will Hunting.” Rest in peace, Elliott.

Let’s move backwards a bit. Coming into the 80s, the American film industry was in a weird spot. The New Hollywood era had ended after the failure of Michael Cimino’s “Heaven’s Gate,” and many of its directors had scattered to the wind. Peter Bogdanovich, one of the major players of the era, ended up directing the film “Mask,” something much more evident of the new era in Hollywood. “Mask” follows the true story of Rocky Dennis, a boy born with craniodiaphyseal dysplasia, a disease which causes calcium to build up on the skull, enlarging it and distorting one’s facial features. The movie, in my opinion, is a gem from an era of mainstream American filmmaking that had more misses than hits. Cher in particular is excellent as Rocky’s mother, you get to see an early performance from Laura Dern, and it’s a genuinely moving, respectful portrayal of someone living their life while they know their days are numbered. Now, for the soundtrack. I saw this movie recently at the wonderful Music Box Theater, where they played the director’s cut of the movie. The version that I saw and loved heavily featured the music of the only decent person to ever come from New Jersey — the one and only Bruce Springsteen.

The movie opens with “Badlands,” has a scene where Rocky gets angry and listens to “Thunder Road,” and the film closes with “The Promised Land,” on the very apt lyrics of, “The dogs on Main Street howl ’cause they understand / If I could reach one moment into my hands / Mister I ain’t a boy, no I’m a man / And I believe in a promised land.” It sets the tone perfectly — the themes of wanting to escape from yourself, and finding your dreams that are present in Springsteen’s early output mirrors Rocky’s feelings perfectly. It makes a lot of sense that the real-life Rocky Dennis loved Springsteen, and Bogdanovich had wanted to use his music as a tribute to him. What I did not know was that the original theatrical cut did not feature the music of Bruce Springsteen, but instead featured Bob Seger, due to an issue between the music label and Universal Pictures. Bogdanovich actually sued Universal for changing the music without his approval, and a director’s cut was released in 2004 with the correct music in place.

It is interesting to think of a version without Springsteen, seeing as his music is essential to the film. It’s just a perfect fit. No offense to the Bob Seger fans out there, but I don’t see how he could top Bruce. Once again, studio meddling ruined a great movie.

Now let’s get a little bit into the semantics of what makes a composer. Jim Jarmusch’s film “Ghost Dog: Way of the Samurai” is technically scored by RZA, of Wu-Tang fame. But this isn’t another example of a musician doubling as a film composer, and getting in the studio with an orchestra and producing a traditional score. For “Ghost Dog,” Jarmusch just had RZA make beats in the vein of Wu-Tang, and peppered them throughout the film. We’ve talked a lot about perfect fits. Having RZA score a movie heavily influenced by samurai culture, martial arts, and classic cartoons is a match made in heaven. This may be the coolest movie ever made; it’s Jean-Pierre Melville on steroids dropped in the mafia with a Wu Tang score. 14-year-old me would have died watching this, and 21-year-old me nearly did as well.

While this movie is endlessly cool, it’s also a fantastic exploration of crime cinema. Many people will criticize mafia movies as endlessly glorifying the lifestyle. However, “Ghost Dog” captures the fall of the mafia better than anyone ever has. The comparisons between the mafia dying out and Forest Whittaker being the “Last Samurai” is fantastic. The whole movie is a love letter to a dying breed of cinema, and to American organized crime. The reason why RZA was the perfect choice for this movie is because his music was already doing that for years before “Ghost Dog” was even a thought in Jarmusch’s mind. The movie is incredible, but without its soundtrack it would be an empty coat.

An auteur often gets mistaken for being a control freak. People think it means micromanaging everything with an iron fist, or doing everything yourself. While some folks certainly do that, sometimes being an auteur is about bringing in those who know what you want better than you ever could. I’m sure all of these movies could have made it through fine with just traditional scores, or just using whatever pop music the studio was favoring at the time. But they’re elevated into the stratosphere by bringing in these musicians and letting their music take over. Imagine any of these movies, or any of your favorite movie music moments replaced by something used just because it’s popular, or because the studio didn’t want to pay. Every tool at a filmmaker’s disposal needs to be maximized, and these films are shining examples of it.

A Love Letter to “The Song of Achilles”

Maybe The Real “Elden Ring” Was The Friends We...