A Love Letter to “The Song of Achilles” 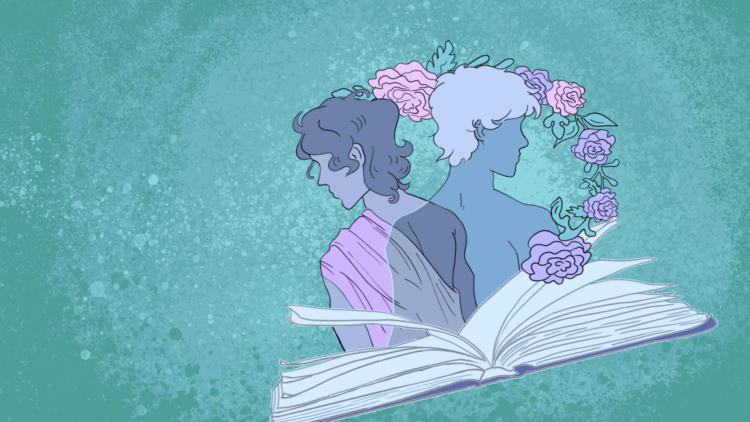 “What is admired in one generation is abhorred in another.”

– Odysseus, “The Song of Achilles”

Of the different types of playing pretend that could be found on the playground, I lived in the world of “Percy Jackson.” I wasn’t mauling other kids like the ones who played “Hunger Games,” I was fighting mythological monsters. I was a demigod; a child of Artemis running around helping Percy and his crew hunt down mythological creatures that threatened our world. From the Minotaur to the Cyclops, I slayed them all.

Mythology was my first-ever love, and I consumed it all through teens who were your friendly neighborhood demigod. I read “Percy Jackson,” the “Kane Chronicles,” and “Heroes of Olympus.” I became obsessed with the stars and researched the constellations, whose origin stories often come from Ancient Greece. I read and learned… until I didn’t.

My love for reading dwindled as keeping up with assigned reading from school left me no room to enjoy reading for leisure. Ancient Greece and all its stories slipped from my mind. I left the mythical world of demigods and beasts behind. I wouldn’t return until years later due to a singular book — “The Song of Achilles.”

O, “The Song of Achilles,” my heart sings for thee just as loudly as the morning bird cries. What was sold to me as the dramatized version of the story of Achilles and Patroclus turned out to be so much more. It was nostalgia, drama, but most importantly, love and acceptance. It was a love truer than any I’d seen before. It was a romance that spoke to the closeted youth that I was and helped me take the first step into my journey of self-acceptance.

I had known since middle school that I was panromantic. I read “The Song of Achilles” in high school. Up to that point, I had only come out to my friends and I didn’t even dare glance at anything rainbow in fear of my parents finding out. But then I read “The Song of Achilles” and was enthralled. It brought me back home to Ancient Greece to the stories that I once knew, and it introduced me to a new one. A story of pure love. The poetry that Patroclus weaved when talking about Achilles; the absolute devotion they had to each other — that was what I was really enamored by. These were things I’d never seen so deeply expressed in another book, and to have it happen in a piece of queer literature? I felt like I’d discovered the Holy Grail. But reading “The Song of Achilles” while closeted felt like I was doing something devious; like it was a dirty little secret I had to keep to myself. As I continued to read, I realized that was the exact opposite of the meaning of the story. Achilles and Patroclus were steadfast in their love, unafraid to let others know exactly what they meant to each other. How could I sit there and be a part of the problem by hiding what this book stood for and for what it meant for me?

While many things from the book don’t apply to today, like being a demigod or seeing Gods directly meddle with a war, their love translates through the ages.  So even if I didn’t live in Ancient Greece and would never have to face the things that they did, I could love like they did. This startling realization made me recognize that while I acknowledged that I was pan, I didn’t accept that I was pan. Even though my friends around me were supportive and LGBT+ themselves, I still had a hard time acting as carefree about it as they did. I never wanted to talk or mention my queerness, I didn’t want to express it, I didn’t allow myself to have crushes on anyone but guys, and I never even wrote about anything but straight relationships. While this was born out of the anxiety and fear of not being out to my family, I decided that I would no longer let that chain me. Just as freely as Achilles and Patroclus loved, parents be damned, I would just as freely love. I would love myself and I would love who I wanted.

The first step was letting go in my writing. Writing was always meant to be about self-expression and I wasn’t sure when that stopped happening. There’s a saying that goes, “Write what you want to read,” and it was about time I did. I began to write characters that had different sexualities and were in queer relationships. There were ones that weren’t out at all but knew they weren’t straight, there were, like me, those who were out to some but not all, and there were those based on my queer best friends who were out and proud. They were my past, present and future. My writing felt like it was mine again, and I found myself enjoying the stories I wrote. I finally began to belong to myself. I talked and joked about my queerness, I bought things with rainbows on them, and I began to consume more queer content.

“The Song of Achilles” was the first ever piece of queer literature that I read, and it gave me hope that, while our society is most definitely not similar to Ancient Greece, there was still a place for me in the world. That if people were open and willing to see “The Song of Achilles” as something good and beautiful, then I was too.

Entertainment, Featured, Literature A Love Letter to “The Song of Achilles”
« Previous Story