Through the fire and the flames of FromSoft’s newest release, friendship and community spirit prevail.

By Nestor Kok May 10, 2022 Entertainment, Featured 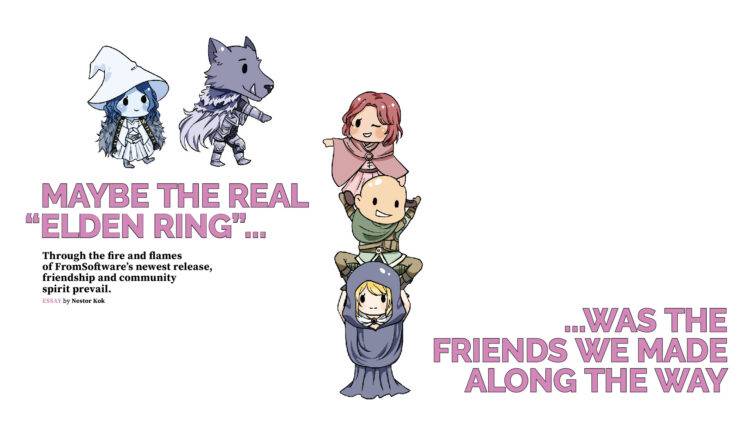 As the old adage goes, we are born alone, and we will die alone. And, if you’re playing “Elden Ring,” you will also die many, many times over. Such is life in “Soulslike” games — a series of punishingly challenging video games produced by Japanese video game developers FromSoftware. Spanning 2009’s “Demon’s Souls” to 2016’s “Dark Souls III,” and including wildly popular spin-off titles like 2015’s much-vaunted “Bloodborne,” the hallmarks of “Soulslike” games are both myriad and instantly recognizable. From their dark, decrepit fantasy settings, to their higher-than-normal difficulty curves, to their iconic creature designs, it’s no surprise that Soulslike games have become a genre all on their own, one that gamers look to for big challenges and even bigger boss monsters.

But there is one staunch quality to “Soulslike” games that goes undiscussed by most. In “Elden Ring,” as in any other “Soulslike” game, you may awaken as a Tarnished by yourself, and you may die at the hands of a combo-rrific boss monster by yourself, but you’re never truly alone. Because the best-kept secret of the Soulslike games is the community spirit that binds its players together.

Colin Cady is a 20-year-old Nebraskan who plays rec league hockey by day and “Elden Ring” by night. He’s also the guy whose frustrated yelling usually mingles with mine over almost-daily Discord calls, during which I eagerly backseat his progress through “Elden Ring.” Despite his numerous (but respectable) frustrated outbursts on-stream, Cady is loving the game — “it’s huge, it’s mysterious, there’s new things to find around every corner,” he says. He doesn’t even mind malding (gamer slang for “mad balding,” or raging) on-stream. After all, when it comes to “Elden Ring,” anyone that isn’t clad in armor and holding a giant sword is your friend. Even if that friend is giggling at your defeated cry of, “But how did that hit me?!”

Cady and I were friends prior to the release of “Elden Ring,” but the game brought us closer through a tight-knit gaming server. Together we mourn failed boss runs and cheer successful ones over a number of hours that, I am ashamed to admit, is almost in the triple digits.

I’m not the first friend to accompany him on his journey through a FromSoftware title. Cady’s experiences with Soulslike games have always been oriented around friendship. “I’ve always had a general interest in “Souls” games but never pulled the trigger ‘cause I thought they were too difficult,” he tells me over Discord. “Then my buddy who was a longtime fan got me into them, and ever since I’ve been a massive fan of the series. In turn, we introduced another friend to [“Soulslike” games], and all three of us would help each other out.”

This other friend in question is Dominic Bazer, a long-time friend of Cady’s and a new mutual friend of mine. Bazer is currently pursuing a B.S. in Secondary Education to become a Social Sciences teacher, and has had less free time for gaming. He was even thinking of passing on “Elden Ring” altogether, and was one of the only players I know who did not pre-purchase the game. However, all this changed in a meeting with his university coursemates, during which he realized that “every single Social Sciences teaching candidate in Omaha was playing ‘Elden Ring.’”

“It was crazy!” he recalls, when I Discord-call him on the record. “All my other classmates were like, ‘Hey Dom, are you playing “Elden Ring” right now? We’re all playing “Elden Ring.” It’s so good.’” I was the only person who didn’t have the game. So I bought it on the way home.”

Was his FOMO justified? “Absolutely,” he says. “This is a once in a lifetime experience. Everyone talked about gaming not having a “Citizen Kane,” but this very well may be it; something to show what happens when you drop players into a world full of systems and tell them to find their own way. [This allows] players to struggle and grow together, rather than railroad an experience with crafted moments.”

When I ask Bazer what he likes best about “Elden Ring,” to my surprise, his answer is only partly to do with the game’s sheer scale and ambition. “What strikes me most about this game,” he says, “is that it’s all community. No one person could climb the mountain that is this totally open-ended and beautiful game alone. We’re all playing collaboratively right now because there’s so much to see and do, we all know we need to work together to unlock its full potential.”

Bazer also notes that, despite starting the game later than most, he still acts as a mentor to others. “I’ve had people reach out and ask me basic questions about combat strategy just because I played the other “Souls” games and this is their first. I’ve had discussions about … literally every game [mechanic]. It feels like when one person accomplishes something, we all do.”

Cady cites a similar feeling of camaraderie within the online community for both “Elden Ring” and “Soulslike” games in general. “They’re amazing, hilarious, and very helpful. Everyone [who’s] a part of [the “Soulslike” community] has mutual respect for others going through the suffering and difficulty [the games] offer. Streaming for the server is a lot of fun, too. It’s really great to show my experiences to others who are on the fence about “Soulslike” games and maybe want to try them out eventually, as anyone can play them. It just takes a good mindset of not giving up.”

The most active streamer behind Cady in our small server is Damon DiSabato, a 31-year-old with a PhD in Neuroscience and a lifelong passion for challenging games with oversized boss monsters. (Before “Elden Ring” fever consumed the server, DiSabato and I would spend two evenings a week grinding through gigantic bosses of a different sort in “Monster Hunter”). Much like Bazer and Cady, he is also enjoying the journey through “Elden Ring” alongside friends, both on-stream and through discussion boards. “It’s been tons of fun to have fellow “Elden Ring” players give advice on where to find good spells or gear,” he tells me. “We’re all finding new things alongside one another and giving little hints where we can. I’ve [also] never really streamed before, so the best part of [that] has been the big celebrations after winning boss battles by the skin of my teeth. The relief combined with our shared excitement over the victory screen have been awesome.”

Cady and DiSabato both agree that co-operative gameplay in “Elden Ring” has sometimes been instrumental to their success with certain boss battles. All “Soulslike” games operate as sprawling single-player campaigns, but support limited multiplayer capacity: Players can “summon” up to three others, randomly or via password-protected friend invites, to help them in-game. However, allowing others to summon you in-game often results in being whisked away to another player’s game without warning, interrupting your own progress unexpectedly. Hence, in the nascent stages of a “Soulslike” game’s lifetime, most players play offline, or disable their ability to be summoned by others. This means that at this stage, most “Elden Ring” players are limited to asking friends they know for help.

For most players in our server, their go-to friend in times of need is Jared Crowder, a 24-year-old from Utah who is far and away the most experienced “Elden Ring” player among us. Crowder has come to the aid of every player who’s asked, from lowly beginners to more experienced journeymen who still can’t seem to crack Godrick the Grafted. When I ask him about his reputation as the gaming sage of our server, he modestly answers, “There’s a ton of cool stuff in the game that’s super easy to miss, so I do like figuring out how to give non-spoilery nudges when applicable. But it’s really just nice to have opportunities to be helpful and make the game more manageable and enjoyable for my friends.”

Unlike the others, Crowder did not initially have the best experience with the “Soulslike” community. “I first tried out ‘Dark Souls’ and ‘Bloodborne’ around six years ago, but abandoned both ten-or-so hours in due to frustration. At this point, I only had exposure to the purist half of the community, and found their meme advice to just ‘get good’ to be demoralizing. In 2020 I gave ‘Bloodborne’ another shot and discovered the more encouraging and helpful side of the community, whose tips actually helped me understand the game and find more patience for it.”

Crowder now mirrors the actions of these players in our server, much to everyone’s delight. “The amount of hints offered by Jared has been just right,” DiSabato responded, when I asked him about Crowder’s help with his own game. “I normally want to find as much as possible on my own for my first go-through, but the tidbits that Jared has offered have been so helpful.”

When I ask Crowder about his own thoughts on the strange yet strong sense of community amongst “Soulslike” players, his answers are so similar to everyone else’s that for a moment I wonder if they had somehow rehearsed their responses before I’d even had the idea to interview them (they didn’t). “‘Soulslikes’ are interesting because they’re centered around struggle,” said Crowder. “Any boss can be the big hurdle for a specific person. The shared relief of getting past difficult sections and making progress definitely helps that feeling of connection.”

An uncharitable read of the “Soulslike” community phenomenon might describe it as trauma-bonding, but I would beg to differ. Despite being a motley group that vastly consists of male gamers, the “Soulslike” community demonstrates highly non-stereotypical behavior for the demographic, founded on tenets of mutual aid, respect, and not being afraid to ask for assistance. It is a window into a rare side of the gaming world in which toxic behavior is being flushed out, thanks to the steadily improving number of those who realize that giving and receiving aid is more rewarding than any “get good” meme will ever be. And, if only those in co-operative FPS circles — notably the most virulently racist and sexist corners of the Internet — would take note, it’s a hopeful outlook for the gaming community, too.

It will probably take hundreds more hours before any of us actually become Elden Lord. But hey, as another old saying goes, everything’s better with friends by your side. And when it comes to “Soulslike” games, I really couldn’t agree more.

Entertainment, Featured Maybe The Real “Elden Ring” Was The Friends We Made Along The Way
« Previous Story

A Love Letter to One Direction