Five pocket-sized stories from Chicago for your Sunday.

In an interview with Kelsey Snell of NPR, Lieutenant Governor Jeanette Nunez of Florida defended the state’s new law that bans classroom instruction about gender identity and sexual orientation for kindergarten through third grade. HB1557: Parental Rights in Education “prohibits classroom discussion about sexual orientation and gender identity in certain grade levels,” among other things. LGBTQ advocates are calling it the “Don’t Say Gay” law, and are now suing to block the law.

Snell asked Nunez about the safety and mental health of the students subjected to this bill. Nunez replied, “We’re not concerned about this creating a potential negative or a potential harmful situation,” citing provisions for teachers and counselors to intervene when the “child may be in danger of neglect, abandonment or abuse.” Nunez didn’t mention that Florida’s public school teachers, like many public employees who work with children, are already mandated reporters. To point out this routine provision is to reveal an absence of real protection for queer children. Nunez’ flimsy defense points to the real interests of Florida’s executive branch.

As one gay, Orlando public school teacher, Clinton McCracken, said to NPR that the law “is a created culture war from [Florida Governor Ron DeSantis] so that he can achieve his political ambitions. That’s all this is. So I’m not teaching kids how to be gay in my classroom, but I’ll tell you what I am doing. I am trying with all my power to teach kids to be OK with who they are.”

For more about current anti-trans legislation rolling out in various states, check out Elton Connell’s annotated reading list, from F this week in honor of Trans Day of Visibility.

The fiber and material studies webinar opened with a class photograph of Vanessa Viruet in sixth or seventh grade, sporting a flash-bulb smile and a huge white bandana across her forehead. The bandana-as-headband was “really hot,” Viruet said, “because J-Lo was really hot.”

Viruet likes to start her artist talks with this image because, in retrospect, she is surprised her family let her wear a bandana at all. The patterned cloth was a symbol of gang violence in the neighborhood. With a disarming laugh, she said she loved this photo because she looked like a “baby lesbian” in this photo, even though she had no idea.

As a fem, queer Puerto Rican born in the states, Viruet makes work that tries to understand the feeling of “not being Puerto Rican enough, not American enough, not queer enough.” Through working with bandana-imagery in unexpected manifestations – a faux “red carpet” draped on a university staircase – Viruet has “colonized” space for herself.

Viruet also works with flags to investigate the status of Puerto Rico. In one project, Viruet, her mom and grandma took apart dozens of American flags. Sitting on the floor of her mom’s living room, the intergenerational trio cut the stars from the field of blue and stitched back together the deconstructed stripes. The recreated, massive American flag offered stripes with scars and stars of negative space.

Find a recap of the artist talk here.

Flaxman Library pop up, in honor of Women’s History Month

On Wednesday, Flaxman librarians held a pop up in the Neiman Center in honor of women’s history month. Graphic novels by women-identifying artists fanned out across a folding table and a rolling shelf. At the far end of the folding table, materials to make zines enticed students to just chill out and doodle. Alex O’Keefe, the self-appointed special librarian of comics, generously and enthusiastically offered a research consultation in the Flaxman’s comics collection.

On the projection screen, a long loop of animations by women played. One particular animation by Yoko Kuno convinced me that I should watch more cartoons. Camille, an undergraduate snipping magazines to make a collage, agreed. She’s been rewatching “Adventure Time” lately, a show that she noted played differently before coming to college. 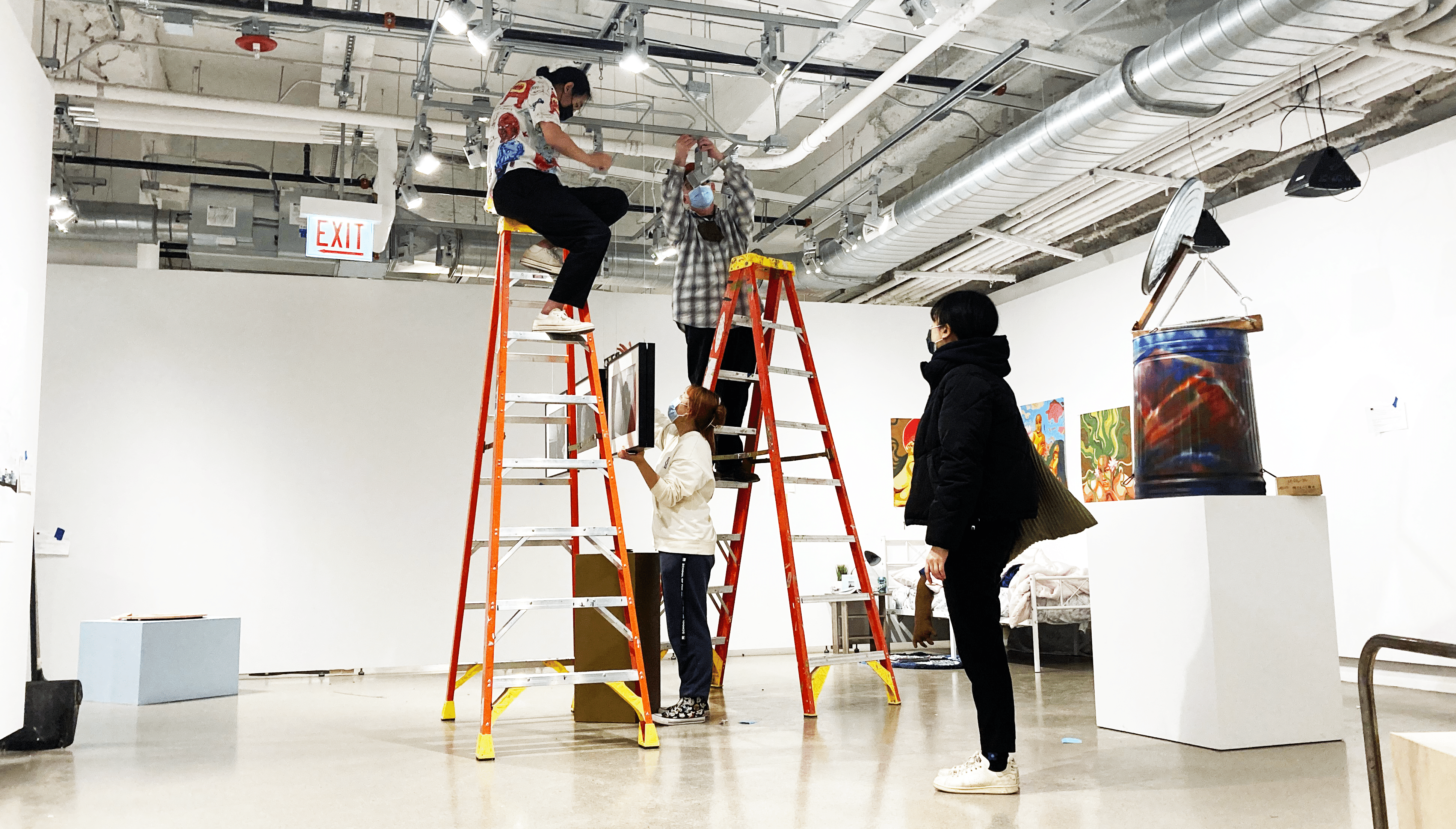 Throughout the week, exhibition staff scurried to meet the needs of over two hundred seniors installing work for their culminating undergraduate exhibition. Stationed at folding tables, exhibition staff shuttled sleep-deprived students to their lottery-assigned space in the labyrinthine Galleries.

The undergraduate exhibition runs from April 9-16, with a preview day on April 8 for the SAIC community.

Escareño said that since October, when she took office, sixteen Parks employees have been terminated, resigned or asked to resign. Over the winter, Parks held ten round tables with parents, employees, and lifeguards to understand the situation. All of the Parks’ three thousand employees completed sexual misconduct training last year, and OPA will be run by five, full-time employees. Meanwhile, Valarie Hays is employeed by the city to conduct an ongoing, independent investigation into the sexual misconduct allegations.

After the presentation of this material, Escareño opened the floor to attendees. Of the eighty community members present, about thirty lined up via the “raise hand” function on the video call. “Help us build a better Chicago Park District,” read the tagline flyering this event. So, accordingly, conversation strayed from OPA, and turned instead to, among other topics, the infringement of the Tiger Woods golf course on the South Shore Nature Sanctuary. A worthy conversation, but, as Maureen Keane wrote in the chat toward the end of the public comment period: “It is critical that we address lifeguard assault of underage teenagers and hear what the Chicago Park District is doing about it to hold people accountable and prevent it from happening again.”

According to Ramona Curry, an attendee, Parks has only received eighty applications for this summer lifeguarding positions, instead of the hundreds of applications they usually receive to fill the six hundred spots. Escareño did not confirm or deny Curry’s intel.

Michaela Chan (MFAW 2023) is swimming. She edits the news/SAIC sections at F. Find more of her work at www.michaelachan.com.