Fiber and Material Studies faculty Vanessa Viruet works with bandanas, flags, and other signifiers of allegiance. 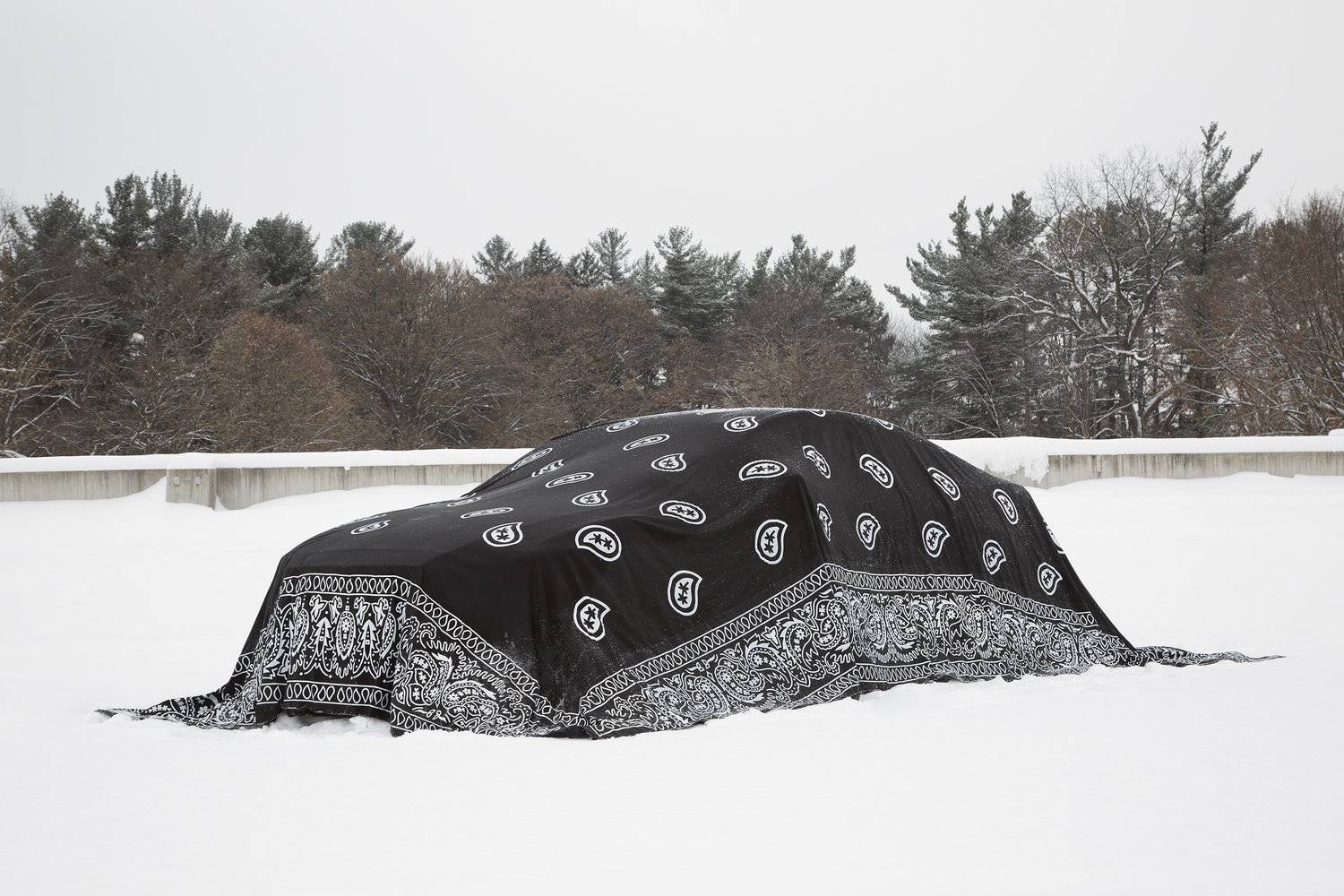 The fiber and material studies webinar opened with a class photograph of Vanessa Viruet in sixth or seventh grade, sporting a flash-bulb smile and a huge white bandana across her forehead. The bandana-as-headband was “really hot,” Viruet said, “because J-Lo was really hot.”

Viruet likes to start her artist talks with this image because, in retrospect, she is surprised her family let her wear a bandana at all. The patterned cloth was a symbol of gang violence in the neighborhood. With a disarming laugh, she said she loved this photo because she looked like a “baby lesbian” in this photo, even though she had no idea.

Moving to Baltimore for art school was the first time she was more than five minutes from home. Her low-income background and physical displacement conspired to make Viruet feel “out of her element” in the art scene. So Viruet’s work reached toward family and home.

The ruffle, that folded costuming element, let Viruet trace a complicated history of colonialism through fashion. Imported from Spain, the ruffle became synonymous with Latin American folk culture even as Carmen Miranda, a glamorous Latina icon, was “shunned by her own people for gentrifying herself.” Viruet spies the contortions of identity demanded of people deemed “in-between” by the white, colonial hegemony.

Upon moving to Chicago, Viruet applied her interest in the ruffle’s tonal gradient to socio-racial questions. She printed a bunch of temporary tattoos of the outline of Puerto Rico and invited people at the Puerto Rican Pride Parade at Humboldt Park to put them on. She documented the temporary tattoos, with a special interest in the huge variety of skin tones that represent Puerto Ricans.

Palettes of color propel Viruet’s work. The banner image for her artist talk was a massive black and white bandana draped over a car. To obtain the car, Viruet’s mom suggested reaching out to a junkyard. As a result, a junkyard owner drove Viruet around for two hours to find the perfect car. Viruet told this anecdote to illustrate her belief that young artists should reach out to their community; you may find a kind person excited to deliver a junked car for free.

Through working with bandana-imagery in unexpected manifestations, such as an imitation red carpet on her university’s staircase, Viruet “colonizes” space for herself. Viruet usually wasn’t allowed to wear bandanas because they signalled gang membership, but the bandana has a varied history: Viruet notes that bandanas have also been appropriated by gay culture, and Martha Washington had a bandana printed for her husband’s run for presidency.

Viruet is interested in the way fiber indicates allegiance. She works with flags extensively, especially to investigate the status of Puerto Rico as a U.S. territory. For one project, Viruet, her mom and her grandma took apart dozens of American flags. Sitting on the floor of her mom’s living room, the intergenerational trio cut the stars from the field of blue and stitched back together the deconstructed stripes. The recreated, massive American flag offered stripes with scars and stars of negative space.

In another project following the 2016 presidential election, Viruet used a cheap, transparent vinyl to reproduce the American flag. Viruet wants to think about: “What does it mean to lose the red, white, and blue signifiers?”

In all her work, Viruet expresses gratitude for her family, her “cheerleaders.” Her mom, in particular, is her “best assistant” and troubleshooter. As stated in the talk’s preview, Viruet calls “attention to the space between the art world and various communities of so-called outsiders” and makes work not previously seen in gallery settings.

Michaela Chan (MFAW 2023) is still swimming. She edits the news/SAIC sections at F. Find more of her work at www.michaelachan.com