The reality of Evita Flores’ surreal career, from SAIC to collabing with Petra Collins. 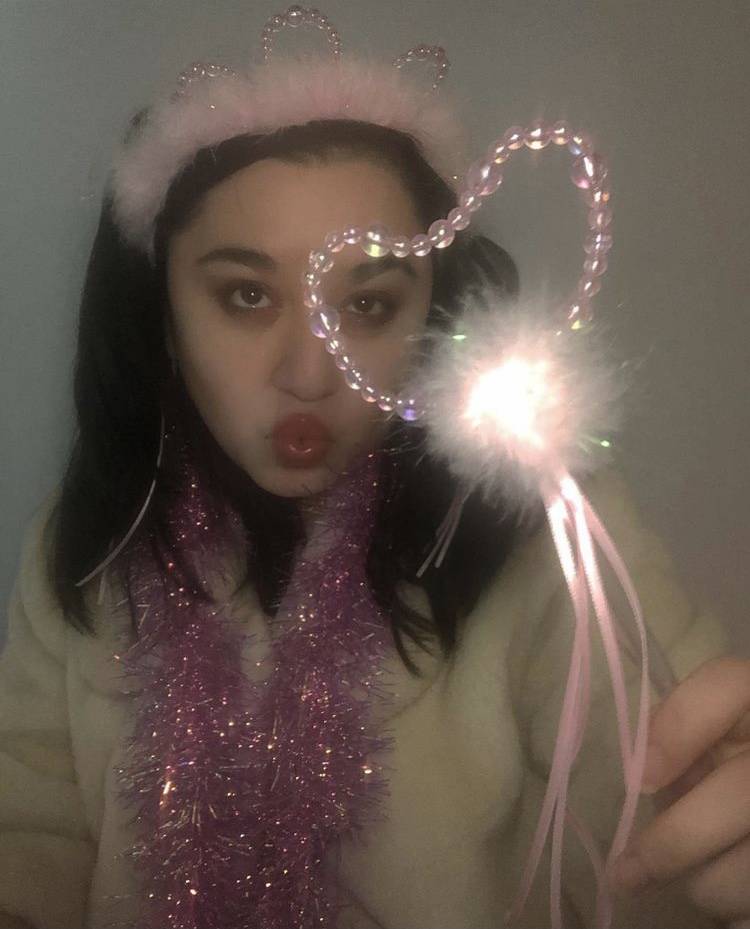 A self-portrait of Evita Flores. Courtesy of the artist.

Evita Flores (BFA 2008) can promise you that imagination doesn’t expire during adulthood. Basked in delicate imagery, her works and illustrious characters of elves, nymphs, and divine beings wrap you up in her fantasy in the way only a true storyteller could.

Flores has a way of “depicting the divine feminine through a childlike perspective,” according to Alex Rummel (BFA 2025), an experimental painter. Her Instagram, @playground.angel.studio, features into the whimsical universe she has conjured up. As her username implies, her artwork is reminiscent of childhood, but composed through a mature lens. Flores’ works include paintings honoring surrealist pioneers (“Star Dancer,” an homage to Marcel Mariën), two symbiotic unicorns impregnated with a blonde faerie (“Faerie Conception”), and a range of both painted and photographic self-portraits. 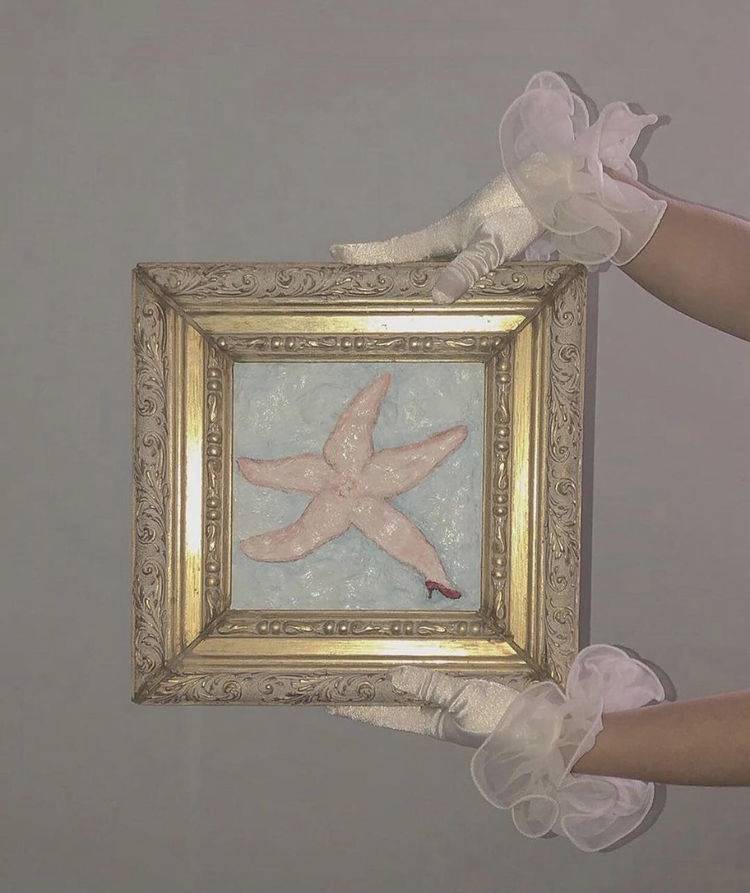 “Star Dancer” by Evita Flores. Courtesy of the artist.

As you scroll, small fragments of her studio can be found baked into the pastel grid of her feed. The walls of Flores’ studio are embellished with her art, posters of Sofia Coppola films, Fiorucci angels, and carts stocked with wine and unicorn sculptures. “I spend a lot of my time in solitude working in my studio,” Flores said. “It’s important for me to surround myself with objects and reminders of things that inspire me, like posters of my favorite films, art books, good music and I just zone in with my coffee.”

What drew me to Flores’ work was how familiar and how literary her pieces felt, recalling the nostalgia of the glittery visuals inside storybooks. Like in the Brothers Grimm’s “Hansel & Gretel”, the witch’s candy house plays a role in their inevitable demise. But in Flores’s “Witch House Party,” if you look a little closer, the siblings would be welcomed to commune in this glowing soirée. Her oil painting, “Clothed by the moon and the sun,“ features two figures personifying celestial bodies. Soft hues of violet, gold, and pink complement the hazy, dream-like state of the figures: the moon sitting above her settee of clouds, and the sun in her golden gown sweetly looking up to her. 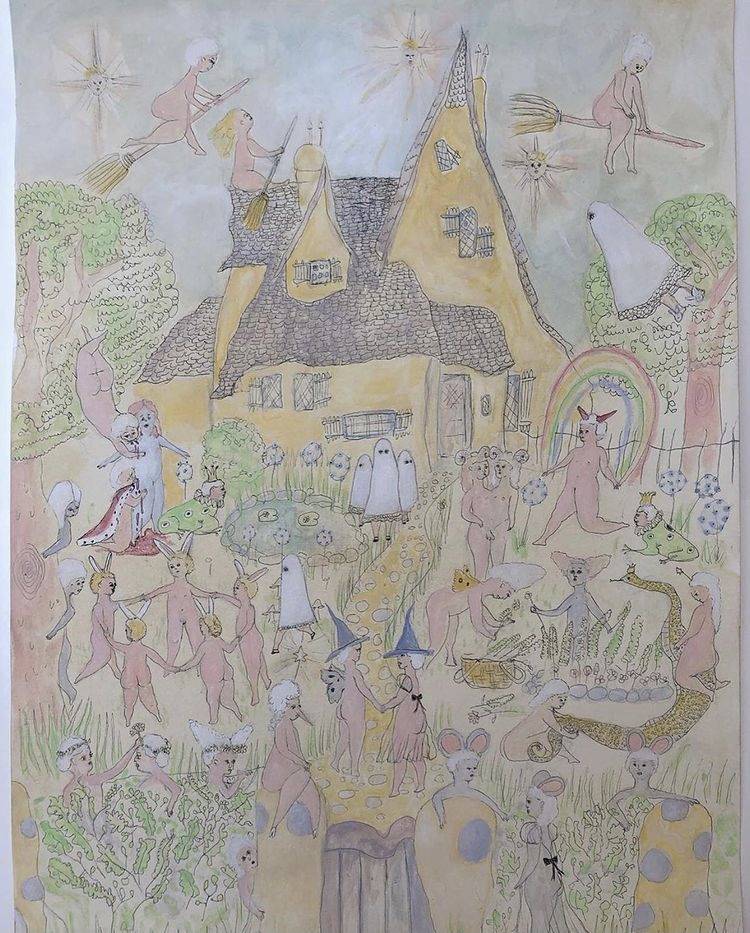 “Witch House Party” by Evita Flores. Courtesy of the artist.

“She [Petra Collins] didn’t have to tell me what to do, she basically gave me free reign to do what I do with these types of illustrations. I would send her my ideas and rough sketches as I progressed and she would sign off on them. They fit perfectly with her vision. She’s an incredible artist, so it was kinda of a dream to be a part of one of her projects.”

During her time at SAIC, Flores took courses based around fashion, but had a hard time with sewing. “I decided to focus my energy on becoming a fine artist and figured there will be a way to integrate my art through fashion,” she said. And in prophetic timing, she tells me that a collaboration with designer Lindsay Jones for an upcoming collection is in the works.

What inspired this alluring atmosphere? On a school trip to the Museum of Contemporary Art Chicago, she discovered the work of Chicago-based writer and artist Henry Darger, whose work depicting bizarre scenes of imaginary settings had started to gain posthumous attention after his death in 1973. “His work tapped into something in me and I’ve been chasing it ever since,” she explained. “I like to play with ideas of magic and I think creatures like fairies, witches, and vampires are interesting in that they can cause mischief, pleasure, and all things in between.” 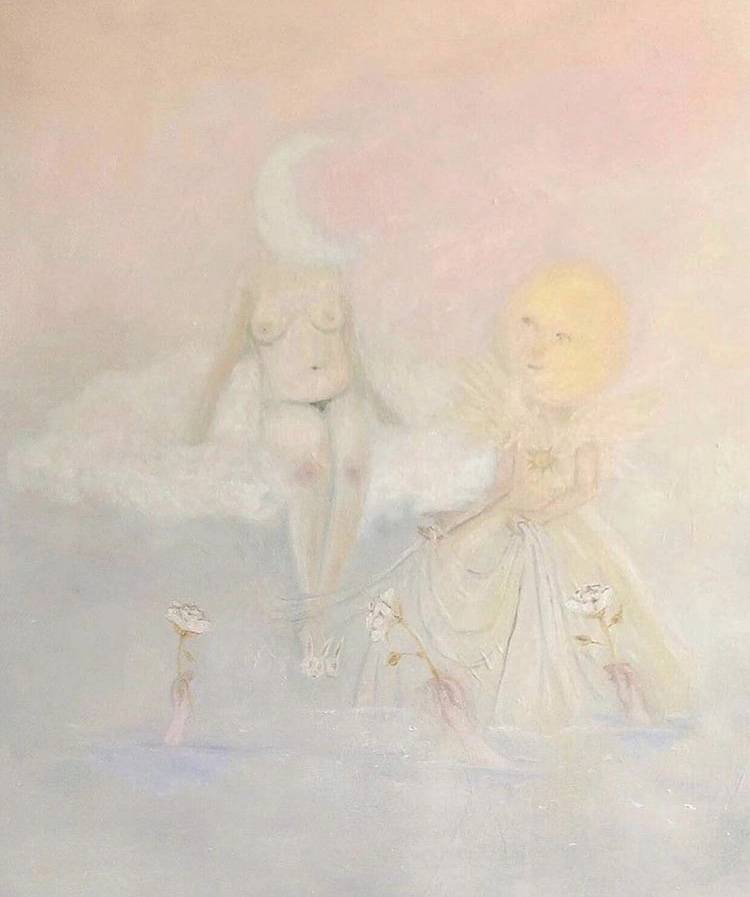 “Clothed by the sun and moon” by Evita Flores. Courtesy of the artist.

While many artists fit their work within the limit of the surface, Flores often continues the narrative onto the actual frame of the piece. If you catch a glimpse of her Instagram Stories, chances are you’ll watch her detail the figures on the metallic molding. “Happiness is a Butterfly” holds two oil butterflies inside of a grey-painted picture frame. Compared to the actual frame, the space for the actual photo is quite small, but the butterflies seem to have broken out of the rectangle cocoon, their wings resting comfortably outside the barrier. You feel like the work is, quite literally, coming alive in your home, like it exists with its own life. A unique choice of formal composition, the surreal quality of these works expands Flores’ lavish wonderland. “This world has so much to offer so if something catches your eye make sure you take note of it immediately, or you’ll run the risk of forgetting it just like a dream you had,” Flores said “I’d like to say I’m the kind of artist who always carries a sketchbook but I use my iPhone if something hits me over the head.”

With her supernatural status, art career, and savvy for reexamining these beloved characters, it should come as no shock that she is just as playful as the art she creates. In an interview with Colette Lumiere for The Ingenue Magazine, she says “It all comes out through my exploration in figurative paintings which I view more as personas, and these fairy tale worlds.”

How to be Independent: Lessons from Sonya Bogdanova 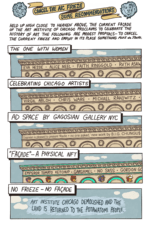 Cancel The AIC Frieze – Some Recommendations