How to be Independent: Lessons from Sonya Bogdanova

Russian-born artist Sonya Bogdanova shares advice on loans, anger, and why one should never work at Blick. 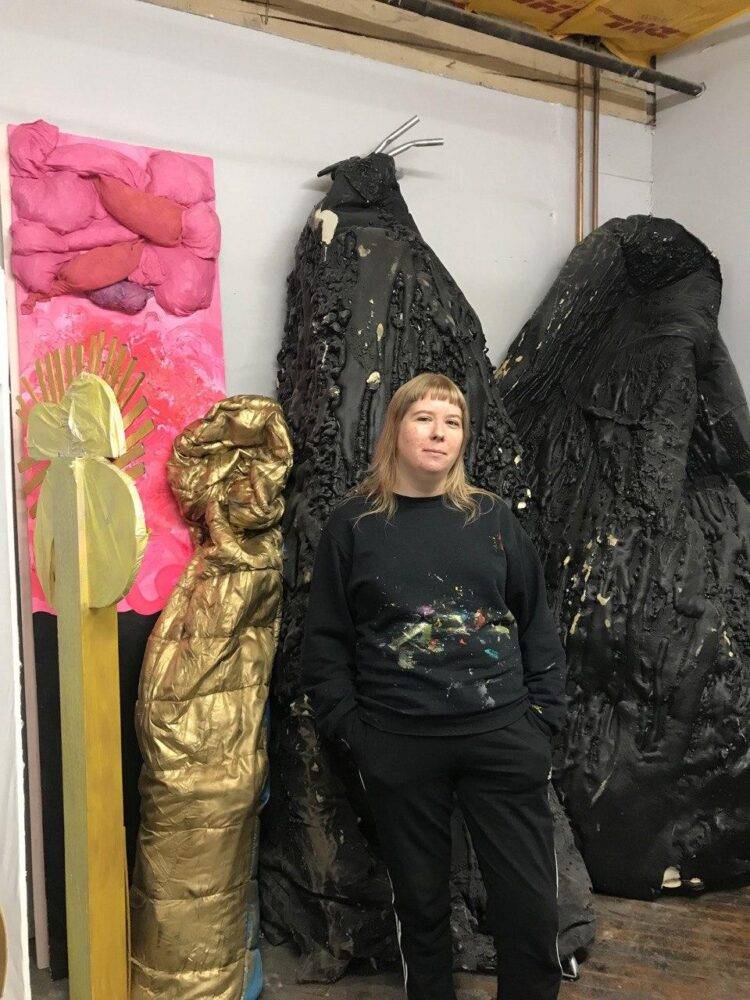 Sonya Bogdanova inside her studio. Photo courtesy of the author.

Sonya Bogdanova came to Chicago from Moscow when she was seven. Born in 1991, a few months before the Soviet Union collapsed, Sonya spent her early life in Russia while the most important events of its recent history occurred. She’s never been to Moscow ever since, has long been an American, and soon she is getting married. She says her dress will be blue to match her eyes, and her wedding will take place in a beige-colored hotel, like the hallway walls to her studio.

Sonya has blonde hair and wears a sportsuit covered with paint stains. “I bought this full-price Adidas to be a stereotypical Russian. I wanted to look like a gopnik,” she jokes, referring to the pejorative Russian slang term for a young person of poor background who usually lives in suburban areas. Adidas sport suits became a significant feature of gopnik’s outfit. However, the stains reveal an artist in her. She speaks Russian without an accent. “I feel like I am a bastardization of Russian culture here cause I am American but I still speak Russian and I was raised in a Russian family.” Technically her family is Jewish-Russian who wanted to leave their home country due to local antisemitism, so the question of emigration was just a matter of time. “I don’t know when my family became capitalists. But they are extremely conservative now. My mom is still donating to Trump. One of the reasons I moved out. Although I think Trump’s really funny.”

We met at Sonya’s studio which looks like a typical artist’s place — white walls, a table with a few art books, construction tools, and many works stored next to the walls. There are two giant pieces of black foam among them. Those were a cave — an interactive sound art piece called “Cloak” which she showed at Gallery 400 at the University of Illinois at Chicago (UIC). Visitors could enter the cave and feel doomed, listening to cryptic music Sonya mixed from Russian orthodox chanting played backward, nature sounds, and sounds of her family speaking.

​​Sonya currently teaches ceramics at SAIC. During our conversation, she imparted lessons on life, how to make art in America, and why you should never work at Blick.

Raised in a strict, patriarchal family whose views are different from hers, Sonya said she struggles to differentiate herself from her family and to avoid their control over her personality. “I always wanted to do art, but my parents didn’t fully appreciate that. They are very pedestrian about culture. They love opera, Renaissance art, but they were mad when I got this,” she said, showing an inch-sized black square (a reference to Kazymyr Malevych’s iconic work) tattooed on her left arm.

Despite family pressure, Sonya went to the School of Art Institute of Chicago (SAIC) and then got an MFA in sculpture at UIC. “I couldn’t live at home anymore. This is a teaching point: if you are in a real shit spot and you don’t have money, fuck it and take out a loan! Take three grand more than the tuition cost to pay rent and move out.”

In addition to the student loan, she took another one to buy a car to get to her studio from Avondale where she lives. Her loan got bigger, reinforcing her support for Senator Bernie Sanders’ campaigns for president, who ran on a platform of student loan forgiveness. Sonya hasn’t paid her loan yet and she is not sure if she ever will, but that’s not the point — the loan gave her her own life and freedom. “Also, you will never finish school if you don’t have a loan, it’s impossible in America.”

Sonya’s artworks look like characters from the cartoon ‘Adventure Time’ if they ran a spin-off about the life of Princess Lumpy Space. With their pimple-like surface and indecipherable shapes, neon-colored sculptures made of spray foam look like alien creatures, especially if placed outside of the gallery space. In her installations, Sonya also works with textiles, clay, and wood. 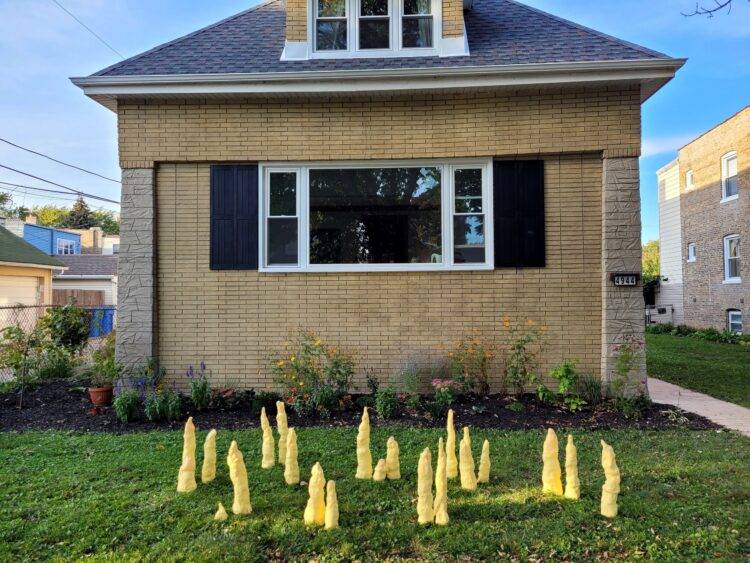 “Children” by Sonya Bogdanova. Courtesy of the artist.

With her cartoon-looking sculptures, Sonya said she attacks the capitalist agenda in her practice. She believes that artmaking is a constant re-awakening of the things that were important to artists but they didn’t pay attention to them. Observing the gentrification of her neighborhood, with the posh architecture promising extreme rent costs, she developed a rage against investments and corporations. “The main job of a mayor now is not action-based. The developers are owning the city.”

Sonya started as a painter. Painting was something she knew from early childhood, and it was accessible. “I always thought that phrase ‘the medium is the message’ was for rich people,” she said, quoting the philosopher Marshall McLuhan. But paintings failed to transform her anger against capitalism; they seemed too flat. At that moment she turned to sculpture as a way to reclaim the space around her and get it back from power structures. 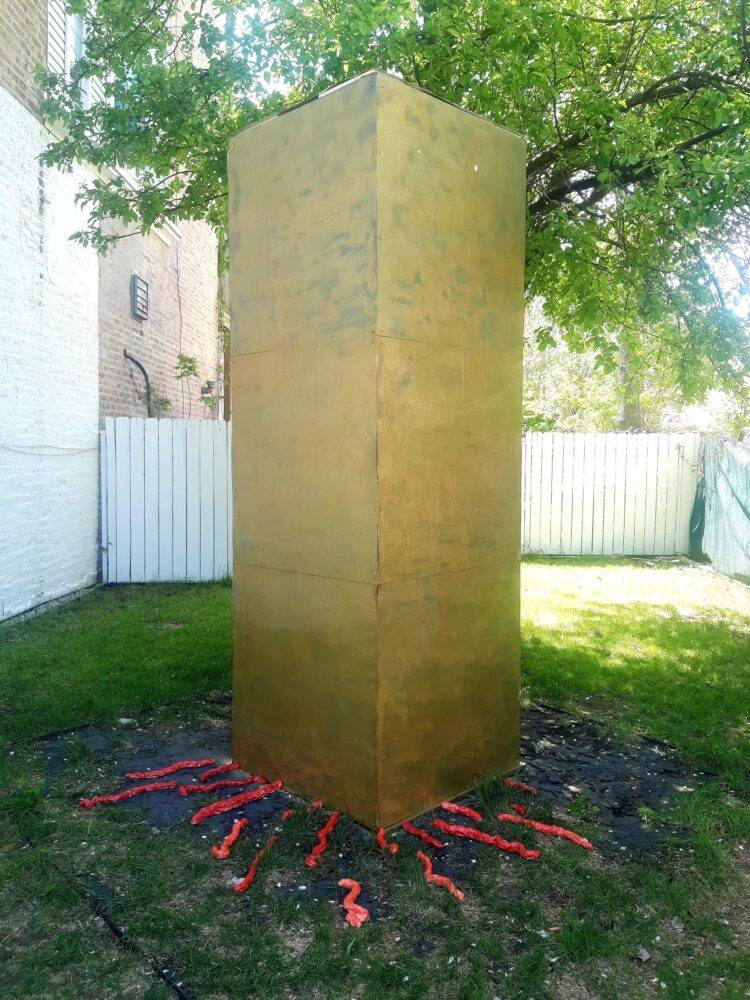 “Your House is Mine” by Sonya Bogdanova. Courtesy of the artist.

Sonya’s capitalist critique is informed by her tough career path. “I was lucky to get to grad school. I was a cashier for so long!” she shares. After finishing SAIC, Sonya worked several jobs. She was cleaning houses, walking dogs, working in customer service at H&M, and being a cashier at CVS and Blick. “Horrible. Don’t work [at Blick]! Put that into the interview. They are very anti-worker,” she reveals, describing the busy schedule and humiliating attitude of the managers. “Blick put that facade like ‘we are cool,’ but no, fuck them! I go to Michael’s cause Blick pisses me off so much!”

“Sorry I swear so much! With students I try to control it,” she adds. Now Sonya teaches ceramics at SAIC and painting at UIC. She rates teaching as the best job she has had. “The tricky part is to figure out how to preserve a commanding presence and like, you want students to look up to you without them looking up to you.” 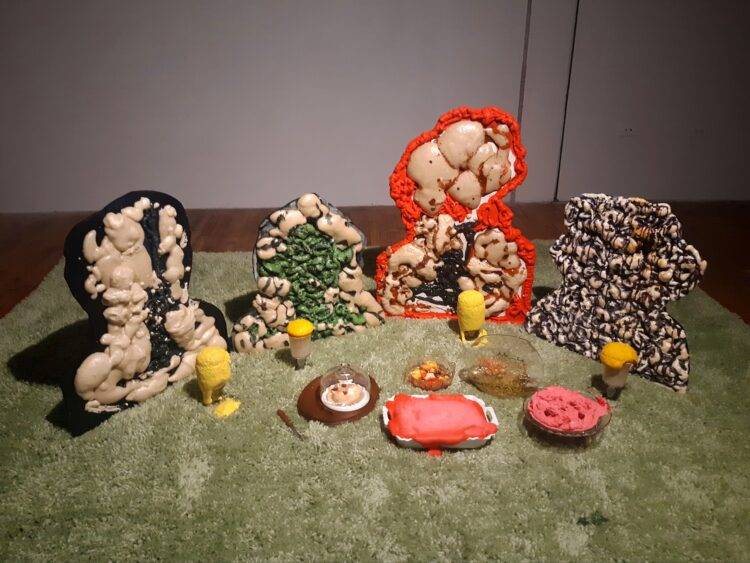 “Untitled (Picnic)” by Sonya Bogdanova. Courtesy of the artist.

Lesson 4: Use more anger
On her Instagram, there is a video where Sonya vigorously and violently smashes an anthropomorphic human-sized white bag with the baseball bat. She helps herself with her legs. She is tired, breathing intermittently. After a few minutes, she finally obtains the wished results — the red stains, reminiscent of blood, appear on the bag. “It was very hard, I thought it would explode immediately. It took a long time to actually get some ‘blood’ out of it. So I came to the idea that violence is not enough.”

The abovementioned work called “Alley Piece” was made in September 2020. Sonya hand-sewed pieces of found fabric into a bag and stuffed it with trash. As a noxious and unpleasant thing, she said, trash becomes an antagonist because nobody wants it around. The purpose was to destroy a bag violently. “I think of hand sewing as a violent gesture, because you stab it over and over again.” Playing with the phrase ‘old bag’, destruction for Sonya turns into a method of exposing social injustices and exploring personal traumas. Some understood “Alley Piece” as a yearning for catharsis, but Sonya denies it: “I don’t think catharsis is attainable as long as we live here, catharsis is very decadent. That’s for therapy, not for art-making.”

Her recent goal is to explore how art can get one through horror and into action. “We live in an actionless world. At least in America,” she explains.

When asked about the challenges for artists these days, Sonya simply puts it: money. “With all my jobs and freelance, I make around 30 grand a year. We should all be paid more.”

Lisa Korneichuk (MANAJ 2023) is an art journalist and editor from Ukraine. Currently, she has over 40 open browser tabs.

Arts & Culture How to be Independent: Lessons from Sonya Bogdanova
« Previous Story 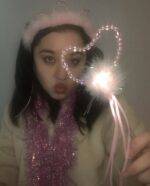