Lana Del Rey, “Blue Banisters,” and the Evolution of a Persona 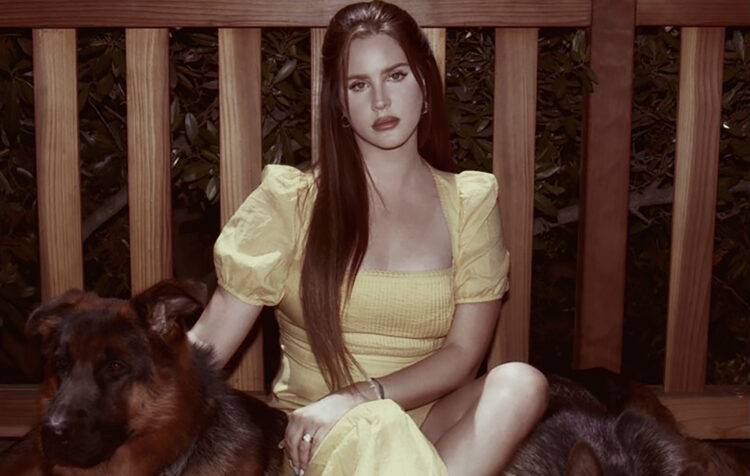 For many people, the mention of Lana Del Rey’s name or music evokes a similar image. Women smoking in sundresses on summer mornings, old Hollywood Americana, and Catholic schoolgirl rebellion, with the hazy silhouette of Los Angeles palm trees in the background. The identities that exist within Del Rey’s universe personify the longing and melancholia of life and romance. At least, this is what many people conclude.

Just a little over seven months after the release of her seventh album, “Chemtrails over the Country Club,” Lana Del Rey extends her ever-evolving lyrical maturity in “Blue Banisters.” After moving the album ahead from its primary July 4th release (and replacing that infamous Picsart-esque edited selfie as the original album cover), Del Rey continues to expand this universe of ultra-feminine sombreness, all the while redrawing those characters and her tear-stained-mascara image.

“Blue Banisters” challenges the pre-existing “sad girl” illustration associated with Del Rey and her work, while allowing herself to commemorate it. Del Rey’s career has taken off in the last decade through a whirlwind of white dresses, red lipstick, and the glamorous interpretation of the American flag. This persona, a prominently feminine approach to this post-modern vintage, “indie girl” counterculture, received heavy criticism from music press and listeners. The malice aimed at Del Rey was gratuitous. Given the “poser” label, so many had boxed her image into a cyclical pattern of style devouring substance. It was not until the release of her 2019 album, “Norman Fucking Rockwell!,” that tested these perceptions of both her discography and her ability to represent them visually: A mixture of pop, alt, and folk lyricism exploring and deconstructing the “American dream,” Del Rey verified her capacity to break free from those characters while standing in her own essence.

She examines the universal change happening before her and her place in it (“Textbook”), narrowing the lens on how she is changing along the way, but also describes her love and tenderness for those outside of romance. “Might be unprepared for having the baby blues / Baby blues, baby blues / If things ever go wrong, just know this is your song / And we love you,” she sings on “Sweet Carolina,” a song for her sister, Caroline “Chuck” Grant. Another piano ballad, she sings about her sister’s potential post-natal depression after giving birth in a lullaby consonance. Following a sequential history of gloomy carols of the female gaze, the deployment of these narratives breaks the mold of her more well-known allegories.

Continuing Del Rey’s extensive record of releasing some of the most referential and habitual pieces of alt-pop instrumentals in modern times, the album fluctuates between orchestral grunge ballads, flickers of 70’s jazz, and building the bridge between the subconscious of craving and the hypnosis of breaking disillusionment. The use of minimalistic piano arrangements frequents this album (the most memorable being the glittering open of “Beautiful”). There is also a violin accompaniment in “Thunder,” and a traditionally Italian instrumental with a rumbling trap beat in “Interlude – The Trio” — a reference to “Il triello,” written by Italian composer Ennio Morrocone for the acclaimed 1966 film, “The Good, The Bad and The Ugly.” On “Living Legend,” it is unclear if the ending is a stunning electric guitar riff over sublime piano compositions, or Del Rey’s voice mixed to sound like a too-cool-to-tell-you implement.

While “Chemtrails over the Country Club” shied away from any allusion to pandemic depression, “Blue Banisters” adopts the drawn out remoteness of quarantine and pandemic burnout. “And if this is the end / I want a boyfriend / someone to eat ice cream with and watch television / or walk home from the mall with / ‘cause what I really meant is when I’m being honest / I’m tired of this shit,” Del Rey sings on “Black Bathing Suit,” highlighting the immense longing for someone to connect with in a time of isolation. On “Violets for Roses” she sings, “The girls are runnin’ round in summer dresses with their masks off and it makes me so happy,” —  but the relief of quarantine lifting is overshadowed by an old lover getting in the way of her dreams — “Ever since I fell out of love with you, I fell back in love with the streets / And, God, does it feel sweet.”

“Blue Banisters” is filled with these more personal, intimate aspects of Del Rey’s life like we have never heard before. Within the domestic setting this album prominently takes place in, we watch the artist curate a self-portrait using these fragments of an unrecognized, inward consciousness. These first-person anecdotes are exclusive to the narrator, yet ring universal truths. It feels more like the reminiscent memoir of Elizabeth Grant than the enigmatic autobiography of Lana Del Rey. The sultry undertones of “Ultraviolence” make a subtle revival through this album. Shelved from her 2014 album, “If You Lie Down With Me,” “Nectar of the Gods,” and “Cherry Blossom” support “Blue Banisters” in its trial of re-exhibiting the sensuality of maturity, while holding its strength in its own intimate background.

That doesn’t mean “Blue Banisters” erases the archetypal counterpart that embodied her discography for the larger part of her career. “Dealer,” the smoky, reverb-heavy rock ballad with English singer Miles Kane, features Del Rey belting over an organ and drum concerto. Back to back with “Thunder,” the tracks were initially meant to be on her collaborative album with The Last Shadow Puppets — Kane’s band with Arctic Monkeys frontman Alex Turner — but finally find their home halfway through “Blue Banisters.” Though the side project was scrapped entirely, “Norman Fucking Rockwell!” housed “California,” another song meant for the trio. The fusion of piano, violin, and organ meld the distinct sonic aesthetics of Lana Del Rey and The Last Shadow Puppets in these tracks — you’re still able to easily decipher the artists and how they work symbiotically. Between the spinning violins and whirring piano arrangements, “Dealer” works like the score of an early Hollywood interpretation of “Fear and Loathing in Las Vegas.”

In the past, it was hard to divorce the sunset-and-motorcycles, ethereal Stockholm syndrome, soft-grunge exterior from Lana and her discography. At a specific point in time, her image and lyrics in a handful of her songs (like that lyric off “Cola”) overshadowed what her music meant to her. “Blue Banisters” exhibits Del Rey’s ability to reroute her typical “I can’t live without you” narrative niche that was so closely linked to her; to the idea of what could happen if she wasn’t her, even if she is unsure what to do with it. It’s as if, at this point in time, Lana has stepped into the mystery of who she truly is. She is the focal point of her music now, no matter who, or what, she is serenading.

The Rise, Fall, and Almost-Resurrection of “Animal Crossing: New...