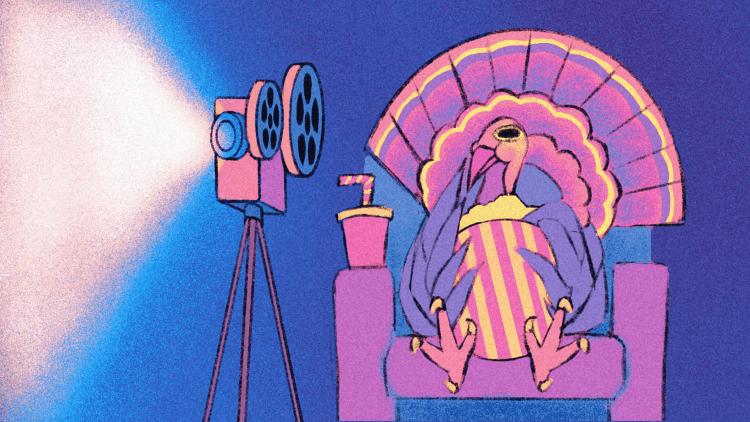 If you’ve ever spoken to a precocious preteen during the Holiday Season, you know that “Die Hard” (1988) is technically a Christmas Movie. That is, it is a Christmas Movie in season and setting, but not in tone. That begs the question — does this loophole work for other movies and holidays? And if so… why not Thanksgiving?

The Addams Family are back in this classic ensemble comedy. Follow along as the Addamses face off against would-be black widow Debbie (Joan Cusack) before she can get to their beloved Uncle Fester (Christopher Lloyd).

Is it a Thanksgiving movie?: Wednesday stars in a “Thanksgiving play” at her summer camp.

Have you ever thought to yourself, “What would a big-budget action-comedy made in the wake of the 2008 financial crisis look like?” Enter 2011’s “Tower Heist.” A group of apartment building employees set out to steal their pensions back from greedy billionaire Arthur Shaw (Alan Alda).

The movie behind the worst prize in “Survivor” history, Adam Sandler stars in this 2011 comedy as a regular Joe, horrified to learn that his infuriating twin sister (also played by Adam Sandler) plans to stay with him through the holiday season until Hanukkah.

Is it a Thanksgiving movie?: In the midst of Thanksgiving dinner, Adam Sandler in drag yells about Jimmy Stewart in “It’s a Wonderful Life” for two full minutes of runtime.

This movie, made famous for being the spiciest love story one could get away with showing at a middle school sleepover, stars a punky Julia Stiles as Paige, a pre-med student from Wisconsin, as she meets (and falls in passionate, passionate PG love with) playboy Prince Edvard of Denmark.

This movie, made famous for being the first time I ever heard an Elliott Smith song not in the context of my dad’s car radio, is a beautiful and moving story of everything from first love to divorce, and what happens when everyone in your family is smart, but sad about it.

Is it a Thanksgiving movie?: The film begins and ends with Thanksgiving dinners, showing how the family has changed over the year where the events of the story take place.

When you exit this film thinking, “Where can I find the soundtrack?” let me direct you to SoundCloud, where you can find the original Broadway Cast Recording, which is the best recording of this score known to man. The film, however, is just as lovely to look at as that recording is to listen to. Follow Diana Ross as Dorothy as she explores the Land of Oz, imagined in this adaptation as a lush urban fantasy setting.

Is it a Thanksgiving movie?: Toto runs out the door after Thanksgiving dinner, setting the events of the film in motion.

For those of us looking to infuse our Thanksgiving celebrations with a little edge, look no further than 2013’s “Prisoners.” Hugh Jackman stars as a Pennsylvanian father driven mad by the disappearance of his daughters. Oscar-winning director Denis Villeneuve crafts a tangled and insidious story of the lengths we will go to for the ones we love.

Lana Del Rey, “Blue Banisters,” and the Evolution of...