Art or Entertainment? The Immersive Van Gogh Show in Chicago

Reflecting on Van Gogh’s legacy at the light show. 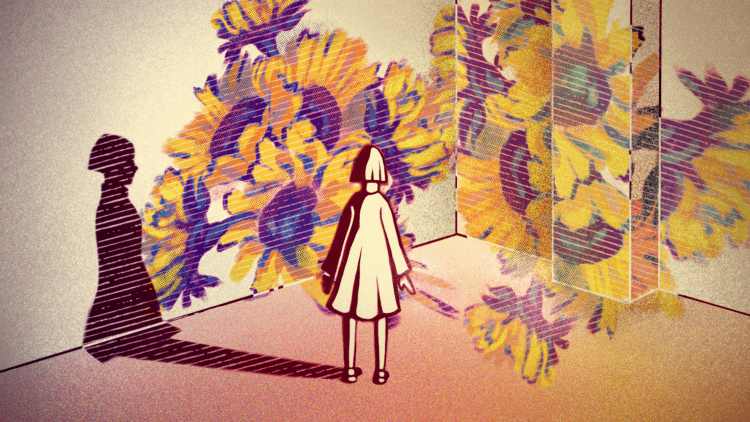 The Van Gogh Immersive Experience originated in Paris, where, according to its website, it received 2 million visitors. I happened to be in Paris at the same time, but missed the show, so I jumped at the chance to see it in Chicago. I jumped at the chance to see the show here in Chicago, partly because I was reminded of something that I had missed almost two years ago. But more than that, I was itching to get out of the house and do something COVID-friendly.

When I entered the building in Gold Coast, I immediately noticed how loud it was. “Je Ne Regrette Rien” by Édith Piaf echoed through the stairs and small bar area, and I was surprised at how quickly I adjusted to the sound. An usher pulled back large white curtains to let me in, and I found myself in an ample space made up of four rooms. Throughout the gallery, large triangular mirrors reflected and warped the images on the walls. White rings of light were projected on the ground, and in them, groups sat either on benches or directly on the floor. I wondered whether, pre-COVID, the exhibition had been so carefully spaced out.

The exhibit permitted visitors to wander throughout the space, although most people sat in the socially distanced circles, drinking and placing their plastic cups on the ground. Eventually, I retreated to a corner in the smallest room where the walls shifted to a deep ultramarine sky, which collapsed into “The Café Terrace on the Place du Forum, Arles, at Night.” People walked past me carrying sunflowers, “The Starry Night” totes, and large posters. In some ways, the exhibition felt exactly like the familiar museum experience that I had missed during the pandemic. I heard a kid crying in a corner. I watched teenage girls pose for pictures, and I was careful not to walk in front of them. A millennial man sat alone on a bench and took off his mask to take a selfie with Van Gogh’s sunny bedroom behind him.

When the music finally reached a crescendo, red, green, yellow, and blue flowers bloomed everywhere. And then “The Starry Night” unfurled above us, beneath our feet, and onto the pages of my notebook. From my seat, I could see four marigold moons rising, one in each room. I wasn’t emotionally affected, but I was happy to be there. At the end of the show, which lasted about 40 minutes, Van Gogh’s face emerged. The portraits dissolved into stars and flickering candlelight.

The show largely followed the trajectory of Van Gogh’s artistic career. “The Potato Eaters” melted into the bright sunflowers and almond blossoms that we are all familiar with. As I watched, I wondered if I was witnessing the evolution of an artist or an unraveling. Van Gogh remains such a complicated figure. When we look at his work, are we supposed to feel sad? Should we feel guilty? Are we so far removed from the society that ignored his work?

I think of Hannah Gadsby’s incredible stand-up special “Nanette” (2019), in which she discusses Van Gogh and the concept of being born ahead of one’s time. Gadsby says that the misunderstood rags-to-riches story of Van Gogh is destructive: “Nobody is born ahead of their time — it’s impossible.” I agree. I think that idea not only romanticizes mental illness, but also serves as a way for contemporary viewers to congratulate themselves. If Van Gogh was born at the wrong time, then the people who ignored him must have done something wrong, and by immortalizing him, we are doing something right. We don’t have to think about the people who live now and suffer or go unnoticed, because we might celebrate them posthumously. Van Gogh’s story presents significant insight into how our culture views both “genius” and mental illness.

As I reflect on the exhibition, I find myself questioning what exactly it was. The show is too expensive to be a more “accessible” way to interact with Van Gogh than traditional museum exhibitions. I witnessed an art and technology piece parallel to Van Gogh, but not a direct evolution from him. Because of our increased use of technology, the way that we consume art has changed. To me, the animation and projection work indicates a genuine piece of art, albeit art that is more focused on entertainment than revealing some deeper meaning. When we question whether these reinterpretations of art are “true” art, we ignore the labor of the animators and the number of people actively engaging with this exhibition. Whether or not these people are immersed in the arts in their daily life, they are consuming Vincent Van Gogh’s work in some capacity.

Sometimes in my classes at SAIC, I worry that we are dictating what art should be and how we should interact with it, from our unique perspective. During my freshman year, a teacher told me not to draw anything “cute” or turn in a painting of a flower. Apparently, these things were not art — or at least, they hadn’t been art for a long time. When I went to the Van Gogh Immersive Exhibition, I watched a crowd of people stare at blooming, exploding flowers, thoroughly enchanted. On that night, in that room, flowers were unquestionably art. This might not have been the exact gallery experience I am familiar with. But regardless, it’s refreshing to see art in whatever form it takes.

5 of My Beloved Chicago Restaurants