SAIC students and faculty weigh in on the new documentary. 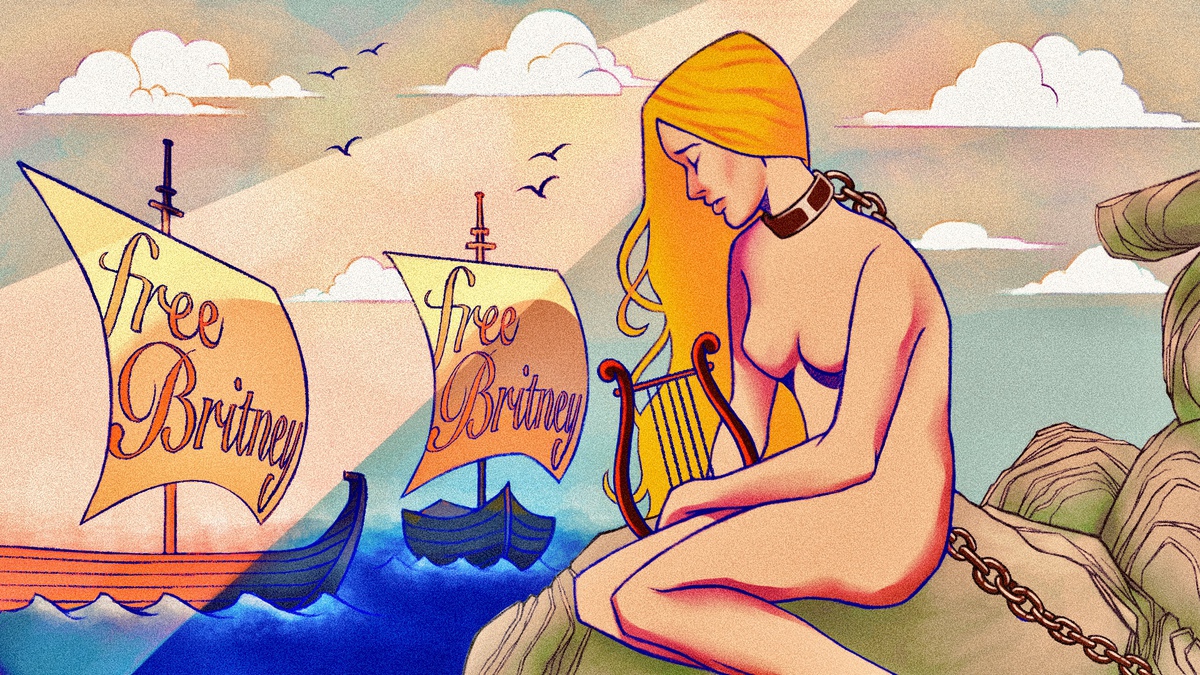 “Framing Britney Spears,” a documentary by the New York Times, is the latest chapter in the pop star’s long scrutinized life of celebrity. The documentary, which is potentially slated for a sequel on Hulu, has increased attention on Spears’s legal case. But for some who already follow her story closely, the documentary wasn’t the full story — “I really disliked the way they framed the fans in the documentary,” noted SAIC student Hanna Field (BFA 2021). F Newsmagazine sat down with several SAIC students and a music history professor to get their thoughts on Britney Spears and the documentary.

“Framing Britney Spears” tracks Spears’s career from her childhood in Kentwood, Louisiana, her rise to stardom in her teens, years of tabloid harassment, and finally to her infamous “breakdown” in 2007. During that crisis, she was placed into a conservatorship, meaning her legal, medical, and banking decisions are handled by her father and other parties. Now, after over ten years in legal conservatorship, Spears is making legal moves to be released.

The public anti-conservatorship movement was originally spearheaded by “Britney’s Gram,” a podcast hosted by Tess Barker and Barbara Gray. #FreeBritney became an online movement in support of Britney’s legal freedom, but unfortunately, like much content on social media, some of the videos that fly under the #FreeBritney banner begin to verge on conspiracy theory territory. Fan theories began to run so rampant — things like Britney was coding distress messages in her Instagram posts — that her social media manager publicly dismissed these theories.

In reality, #FreeBritney was spearheaded in 2017 by “Britney’s Gram.” At that point, says Field, no one had talked about her conservatorship in years. A new generation of young fans grew up after 2008, who would only know Spears from her music and demeaning jokes like “If Britney Can Make It Through 2007, You Can Make It Through Today.”

“They blew the whistle! As much as Ronan exposed Weinstein, they exposed Britney to the next generation,” Field said.

But the documentary didn’t devote much time to the “Britney’s Gram” podcasters. In fact: “As a film student, something that bugged me was the way they framed the two women who started the #FreeBritney movement as crazy conspiracy theorists,” Field commented. It’s a common trend, she noted: “The way that fans (young women, queer men) are always coded as stupid. … but women and queer people saw this first, and started this movement,” said Field. This type of person is more in tune with people who need help, she said, because they themselves are more likely to need that kind of help.

Zeinab Ajasa (BFA Comics 2021), on the other hand, did not feel misled by the documentary. Like Field, she is “tapped in” on news of Spears’s career and her conservatorship. A makeup video from YouTuber Jaime French was what first sparked Ajasa’s interest in #FreeBritney. In the video, French discusses Spears’s 2002 movie “Crossroads” while doing her makeup in the style of the movie. “It’s more commentary on the movie than a makeup tutorial,” explains Ajasa. She had been a fan of Britney’s music since she was a kid, but from there, Ajasa jumped down a “rabbit hole” of videos about Britney and her legal case.

I asked Field whether she would call the #FreeBritney content “true crime,” and she said yes. True crime TV shows, documentaries, and podcasts like “Serial” are currently enjoying a rise in popularity, and they typically explore murder or missing persons cases. Britney’s conservatorship, on the other hand, is a complicated legal case, and all parties involved are still alive.

In Field’s opinion, this genre classification is exactly why “Britney’s Gram” didn’t get its due in the documentary — because the podcast is considered a true crime series, and true crime is considered trashy for its popularity with women. But to Field, true crime is an important genre because it exposes flaws in the legal system, and demonstrates what people in power — white men with money, typically — can get away with. “And this is definitely a crime,” said Field. “It’s a financial manipulation.”

The #FreeBritney movement has prompted conversation about disability, mental health, and legal rights. Why should a diagnosis of mental illness remove someone’s rights to control their own life, Field asked? “Even if she’s not a mentally fully functioning person — who is? She should be an independent person. You can be mentally unwell and be a free person.”

According to “Framing Britney Spears,” the national fascination with Spears’s sexuality began with her provocative breakout video for “…Baby One More Time,” in which a 16-year-old Spears dances in a private school uniform. This lurid fascination quickly expanded to her personal life. At the height of her fame, her sex life, her marriage, and her motherhood were all targets for the paparazzi, and subjects for constant national discussion.

“There’s a sense of artificiality around female singers, as opposed to the idea of authenticity around male performers,” explains Dr. Emily Hoyler, a music history professor who teaches a course called Music and Sexuality at SAIC. Spears’s music and music videos were something to be consumed, “not something to be valued.” This extended to her personal life.

This link between singing and sexuality is part of our cultural mythos, Hoyler told me. For example, she cited the myth of the siren, a singing goddess from the deep who lures men with their voices — then kills them. “Seductive and sensual women are feared. The voice itself is almost a magical thing to be feared,” Hoyler said — because singing comes from the body, unlike other ways of making sound, such as instruments. There are no common myths about seductive pan-flute playing ladies, she pointed out.

“There are many examples of operas in which the prima donna is “undone” by realizing her sexuality in some way. Often the soprano’s character arc concludes with some sort of iconic mad scene in which she virtuosically performs her madness (and often death) to an adoring audience,” she said. Examples include Donizetti’s “Lucia di Lammermoor” and Richard Strauss’s “Salome.” “As soon as she demonstrates sexuality, she’s torn down.”

Britney was a worldwide star, a household name, before the conservatorship. She is “one of the most successful performers in history and she doesn’t have control of her own career,” said Hoyler.

I asked each interviewee whether they thought Spears’s kind of legal bind would ever be placed on a male performer. “No,” said Ajasa, and Field agreed, no, never. But Hoyler pointed out that boy bands, including a few that were popular at the same time as Spears, have been exploited by record labels and managers too. Lou Pearlman, creator of Backstreet Boys and NSYNC, manipulated his contracts and was later sued by almost all of his bands for misrepresentation and fraud.

But there is, Hoyler said, a different perception of ownership around young female popstars. “Young woman pop stars where bodies are very important. So there is a different sort of anxiety about how they control their bodies and messages and images.”

Spears’s legal proceedings are due to resume in April. Ajasa says she’ll be keeping up-to-date with the case, hoping that Britney regains legal freedom. “You watch old videos, and you see how happy she was, and it’s just different now. No one deserves that.”

Brief: How to Advocate For a Monument To Chicago’s...