“Look For the Abstraction In the Real”: Alum Sean Sauer at Cerulean Arts 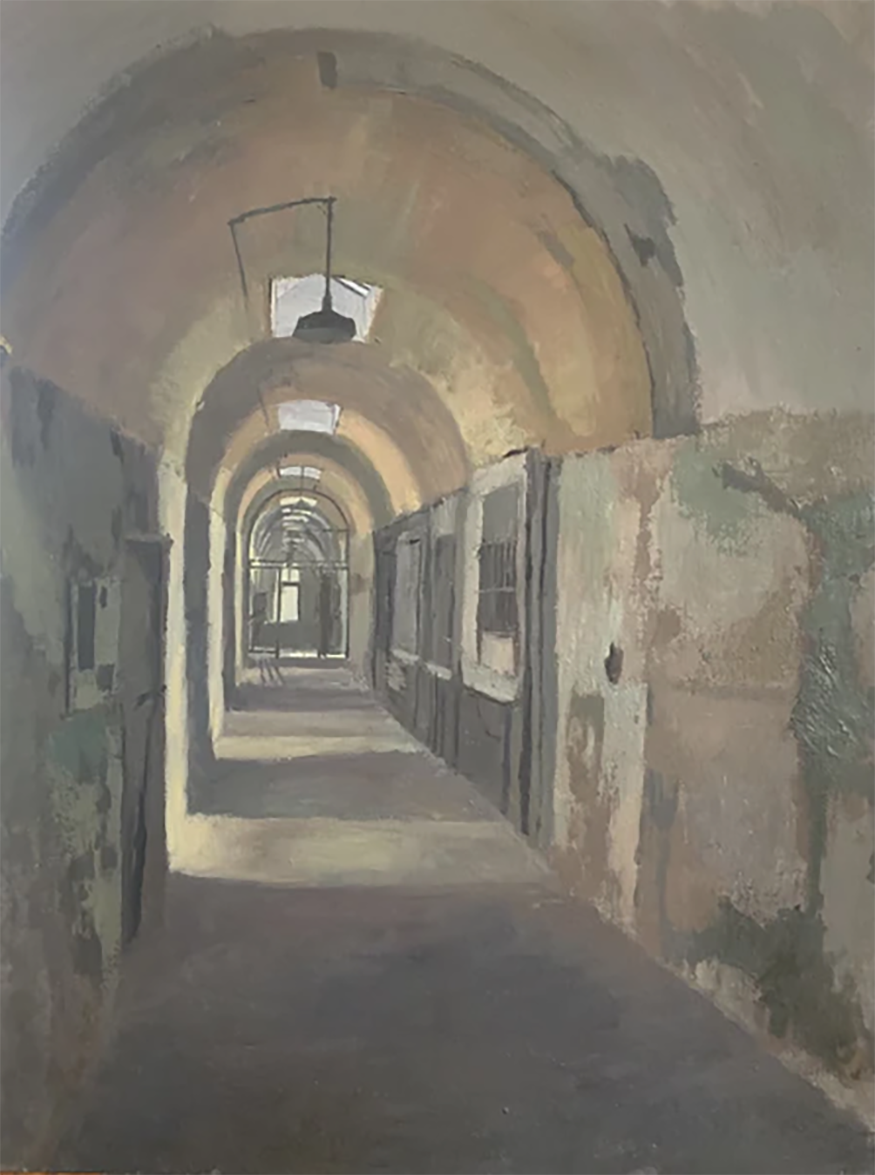 “Eastern State Penitentiary, Cellblock 11″, oil on canvas, 26″ x 20”. All photos are courtesy of the artist.

Sean Sauer’s oil paintings examine the effect of light on the environment. In one painting in his recent show at Cerulean Arts in Philadelphia, “Eastern State Penitentiary, Cellblock 11,” he takes us through a long-abandoned prison hallway lit by skylights, creating receding rings of light and dark that seem to travel back in time.

Sauer is a graduate of the School of the Art Institute of Chicago (SAIC) (BFA PTDW 1994), and also has a MFA in Painting from Indiana University. He is now a professor in the Art and Design program at Community College of Philadelphia (CCP). Sauer was my portfolio prep professor, and he encouraged me to attend SAIC. His paintings and drawings are often complex, but not stilted. Sauer shows an extraordinary patience with his interconnected angles and accurate perspectives in the Eastern State and Planting Room series without them ever appearing like mechanical drawings.

Realism melds into abstraction, creating an ethereal image. He says he is reminded of painter Fairfield Porter’s advice to “look for the abstraction in the real.”

During his Cerulean Arts Zoom reception, Sauer spoke about using a limited palette: “At a certain point I became really interested in the kind of subtle nuance of mixing your own blacks and grays and coming out of mixing complementary colors together and seeing where that starts and where it can lead. But really, [I’m] trying to do a lot with a little… mixing these purple blacks and then trying to work in that range, to try to hold together the atmosphere that you see and feel of the place.”

This process is explored with his series of images of the same planting room. “Planting Room 1” is an oil painting on canvas, while “Planting Room” is a charcoal drawing on paper. The painting is a rethinking of the space, while the charcoal drawing is darker, more detailed. Sauer said of his charcoal drawings, “I sort of came to that trying to figure out how to paint those darker spaces. I had to change some of the colors of my palette to make everything darker.” The painting is still complex, but somewhat simplified and brighter. The painting has more effective lighting technique; I can sense the clear glass in the left window, the open door and the windows in the far rear of the planting room. Purple is usually presented as a vibrant color, but here it is grayed down. A lighter purple box sits beneath the work-table. The expert use of Sauer’s small, muted palette dramatically changes the tone from the charcoal drawing to the painting.

“Painting Room 2” is a lighter, brighter painting. His palette is not as deep. Instead of off black and deep grays and browns, there are lighter shades in a sun-filled workroom. It reminds me of a bright, crisp morning full of potential. There are sheer tones of purple on the window and door glass that allow the viewer to see what is behind the glass.

The Eastern State Penitentiary in Philadelphia operated from 1829 to 1971. It was closed 50 years ago, and is now a museum. Much of the prison has been allowed to decay. “Eastern State Penitentiary, Cellblock 10” is another example of Sauer’s talent with casual perspective and multiple light sources. We look down a long, deep hallway to an opening leading outside. The hallway has layers of pointed arches and skylights. The arches reflect light, and are separated from each other by shadows. The right wall windows project streams of warm sunshine on the lower left wall, door, and floor. A muted light comes from the skylight illuminating the hall.

“Eastern State Penitentiary, Cellblock 11” is another prison hallway using a similar palette. The painting is entrancing. We are entering the darkened part of the hallway, and there are skylights on the ceiling of the rounded arch hallway. Each skylight illuminates a short portion of the hall, creating partial ribbons echoing light and dark as the hall recedes to the light from the window at the end.

“Eastern State Penitentiary, Individual Cell” has the sad sense of long-forgotten people in a long-forgotten cell. It is eerie and dark with a single skylight in the ceiling. There are only muted blue-gray shades. Large chips of plaster and debris fall from the ceiling. It is damp and musty. Men lived, and perhaps died, in this cell for over a century, and no one cared. No one even cares about the decrepit shrine that their lives existed in; Eastern State Penitentiary is now used for Halloween horror shows. Sauer presents a quiet dignity and witness to this historical space. There is a hopelessness that has been preserved forever.

Sauer’s smaller paintings are important to his overall practice. “I have these little paintings that I just started working on. It just kind of happened [that] I was working on this larger thing, and I just set up another smaller painting and I was able to go back and forth. Then you can have a little bit of a dialogue between the things. Once you get into the sort of longer-process painting, to be able to paint some things that are faster can kind of reactivate your thinking process [when] you start to feel like you’re slowing down.”

The “Blue Tarp” paintings are about noticing the environment in a commonplace, utilitarian space. “Autumn Tree” is a joyous painting that perfectly combines realism and abstraction. The tree is an explosion of orange, muted green, brown yellow and red. “Green House on Eagle Road” is an example of Sauer painting as the light is changing on an autumn afternoon. And “The Bay at Dusk” is a fleeting moment at sunset that won’t be there a moment later. Note how Sauer captures the sunset peeking through the gray, blue, and purple clouds. The bay shimmers beneath it.

Regarding the reflection paintings, Sauer said, “I was painting on one of these larger spaces and I saw this beautiful reflection of light in a piece of glass. It inspired a whole small series of paintings, up close looking at a reflection.” Sauer is a fan of John Moore’s work. “I thought it would be a neat idea, that flat wall would be a challenge to me. Looking through and seeing what I can see with all that glass… I’m just hoping that the paintings do the place[s] justice,” Sauer said.

Sauer says he’s influenced by Andrew Wyeth, and I see that. There is a loneliness that reminds me of Edward Hopper. Speaking about the amount of time he spends alone painting he said, “Now I spend all of this time by myself. Some of the artists talk about COVID [isolation]… I feel that the way that I paint is already covidesque, covidlike.”

See more of Sean Sauer’s work at his website here.

Safety or Surveillance? The Citizen App Comes to Chicago