Safety or Surveillance? The Citizen App Comes to Chicago

When crime data and social media unite, things get messy. 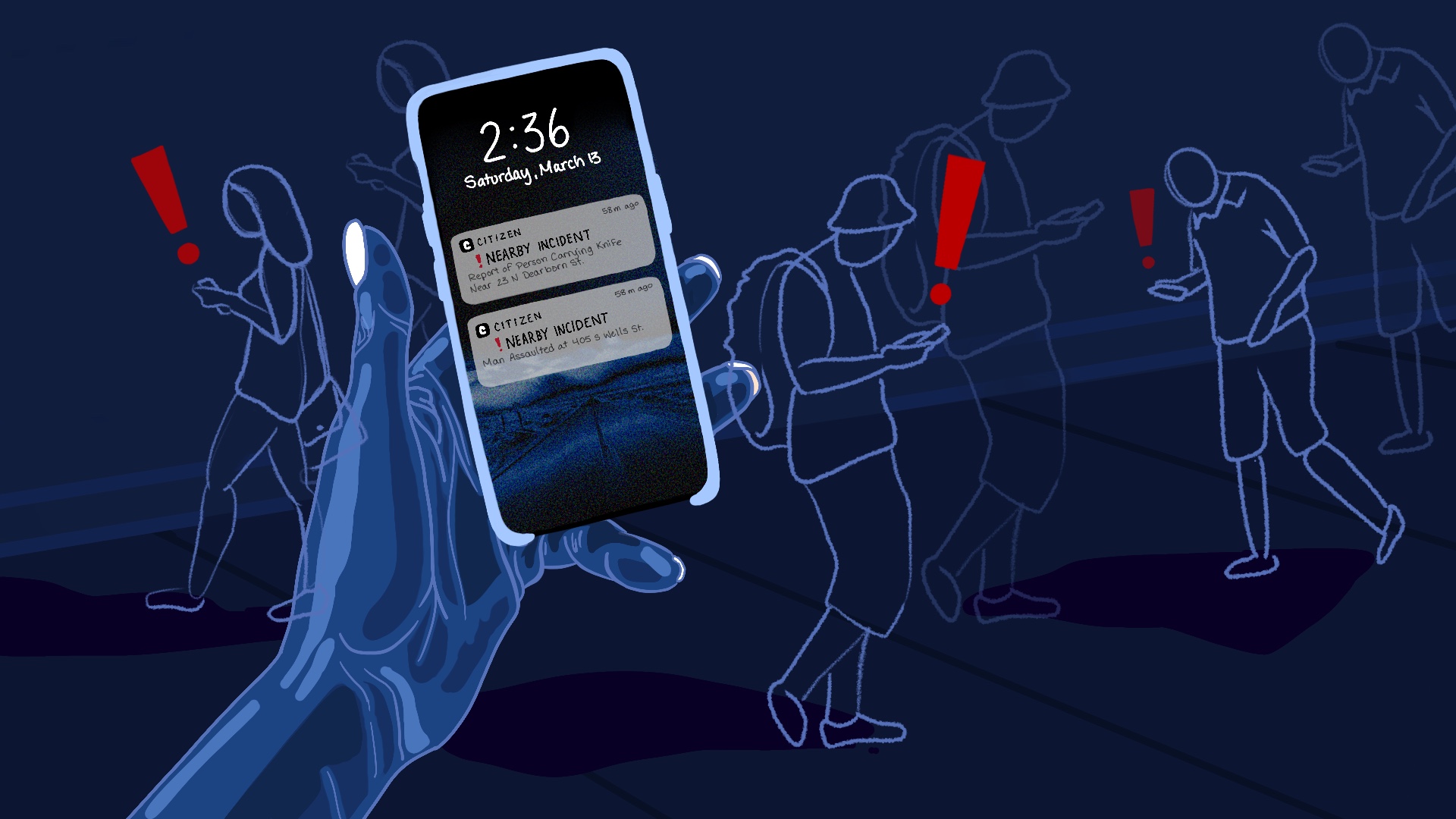 You don’t need live updates from a crime monitoring app to know about Chicago’s recent spike in carjackings, though it might heighten your awareness. Not only does the Citizen app send prompt notifications that provide the exact location of reported crime incidents, it also includes an individual newsfeed and comment section for each event, summarizing the details that pass through police scanners and then some — an eight-hour old report of a vehicle stolen in Avondale still offers a license plate number and the vehicle’s make and model; after a fatal shooting in North Austin, Citizen users post videos of police cars flashing their lights outside of a liquor store, and over 2,000 other users react with “angry” and “shocked” emojis; beneath a report of a “Loose Aggressive Dog” in South Shore, a Citizen user comments, “He is barking like crazy!”

Citizen launched in Chicago in May of 2020 and is one of the app’s fastest-growing markets behind New York City, Los Angeles, Philadelphia and San Francisco, according to a spokesperson for the company. The app’s website boasts that over 6 million users in 25 cities in the U.S. have received a total of over 4 billion crime alerts. In Chicago, it’s seen over 395,000 downloads since it arrived. The claim at the very top of its “About” page is that of “making your world a safer place.” But in cities like Chicago, whose crime rates are so entwined with systemic poverty and inequality, what can data and a virtual means for public commentary actually offer?

When Citizen first arrived in New York City in late 2016, the app had a different name — Vigilante. It went viral immediately and then got kicked off of the App Store within the first week of its launch. The primary concern was that it promoted behavior that matched its namesake, encouraging people to approach and report criminal activity through the app instead of reaching out to law enforcement. Part of the problem was that Vigilante’s debut came in the wake of a reckoning for other public crime-monitoring services. Crowdsourced reporting features on SketchFactor, which launched in 2014, appeared to provide incidents of racial profiling. Nextdoor, a website that has been “connecting neighbors” since 2010, came under fire in 2016 for harboring racist fearmongering within its feeds.

Vigilante returned as Citizen in March 2017, just a few months after the App Store pulled it down. Instead of reporting crimes themselves, New Yorkers could receive alerts that the app’s employees recorded from 911 dispatches, and then add comments or upload videos if they happened to be near an incident. Big investors entered the picture and Citizen launched in San Francisco and the Bay Area later that year, and then expanded to Baltimore, Los Angeles and Philadelphia in 2019.

Its popularity grew as its users began beating network news cameras to the scene, especially those that made national headlines, like a 2017 truck attack in New York City and a shooting at YouTube’s headquarters.

“We’ve developed the conviction that this information belongs to the people and it’s not just the first responders that should be getting it,” said Citizen founder and CEO Andrew Frame in a radio interview upon the app’s arrival in Baltimore. He spoke of “unlocking” a “closed public safety system,” and “community power of information.” On the option for users to live stream incidents, he suggested that this ability to “see exactly how the issue is being resolved” had potential to “restore trust between police and community.” This is where the host interrupted him to push the conversation deeper into the topic of transparency in policing. Like Chicago, Baltimore’s police department is under a consent decree with the Department of Justice, which mandates the city to work towards resolving police misconduct with transparency and community feedback.

Frame then responds with the help of Ben Jealous, former president and CEO of the NAACP, who sits beside him in the studio. On day one of Citizen’s launch in Baltimore, a report of “Police Activity” went out to nearby users.

“Black man, 31 years-old, on the ground, handcuffed,” Jealous described. “He’s been told he looks like a murder suspect, you know, he hasn’t killed anybody.” Then, a citizen user goes live.

“The beauty of this is that he’s no longer alone,” said Frame.

Jealous chimed in: “He thinks it may have saved his life.”

But Jealous is also on the board of a venture capital company that invests in Citizen’s parent company. And, as The Intercept reports, the app has since forged murky relationships with law enforcement — one of their board members is a former NYPD commissioner and LAPD chief.

Still, in the wake of the protests during May and June of 2020, following the police murder of George Floyd, Citizen saw a peak in download rates, along with encrypted messaging app, Signal. Protesters could use the app to keep tabs on the location of both demonstrations and police presence, share footage through live streams and tips through comments. Citizen’s potential as a tool for activism and exposing injustice looked promising.

But Chicagoans who use the app seem to have mixed feelings about who to hold accountable.

“Thank you Lightfoot and Kim Foxx for destroying our city by doing nothing,” comments a Citizen user beneath a report of a fatal shooting in East Garfield Park.

Another user replies: “Stop blaming the mayor and state’s attorney! This mess starts at home!”

And another: “Someone drops their pencil and people blame Kim Foxx. With or without her crime is gonna fucking happen.”

I’d estimate that I receive 7-10 push notifications per day from Citizen about incidents near me, from carjackings to reports of people fighting. I’d also estimate that three quarters of these incidents are met with at least one comment criticizing Cook County State’s Attorney Kim Foxx, whose reform-minded policies have led to a notable decline in prosecutions of low-level offenders. Rare are responses that defend her, like the two comments cited above.

It’s worth noting though that Citizen has received a lot of criticism that its function of constantly notifying its users of crime creates a perception that the individual is surrounded by danger and at an increased risk of becoming a victim of robbery, assault, etc. In Chicago, the data seems to be skewed by neighborhood, with far more “reports” scattered south of 63rd St. and west of Kedzie Ave

“It does really reinforce and strengthen the perception that there’s more crime on the South and West sides,” said Bryce, one Citizen user.

Of course, the city’s South and West sides are under-resourced to an extent that can make crimes like theft and gang activity a matter of survival for some. So then, is Citizen’s display of data helping to expose the repercussions of systemic inequality in Chicago? Or is it feeding a dynamic that could push these disparities even further? It might be too early to tell — the Chicago-based crime experts and scholars I reached out to weren’t familiar with the app’s inner workings.

At this point, Citizen seems like more of a social experiment and potential well for data mining than the tool for safety that it markets itself as. That’s not to say that maintaining an awareness of local events isn’t important — it’s paramount. But if it feeds paranoia and starves a community-minded outlook, then it might be worth taking with a grain of salt.

Through The Fence: A Review of “Knotted Lines”

“Look For the Abstraction In the Real”: Alum Sean...

One Response to Safety or Surveillance? The Citizen App Comes to Chicago