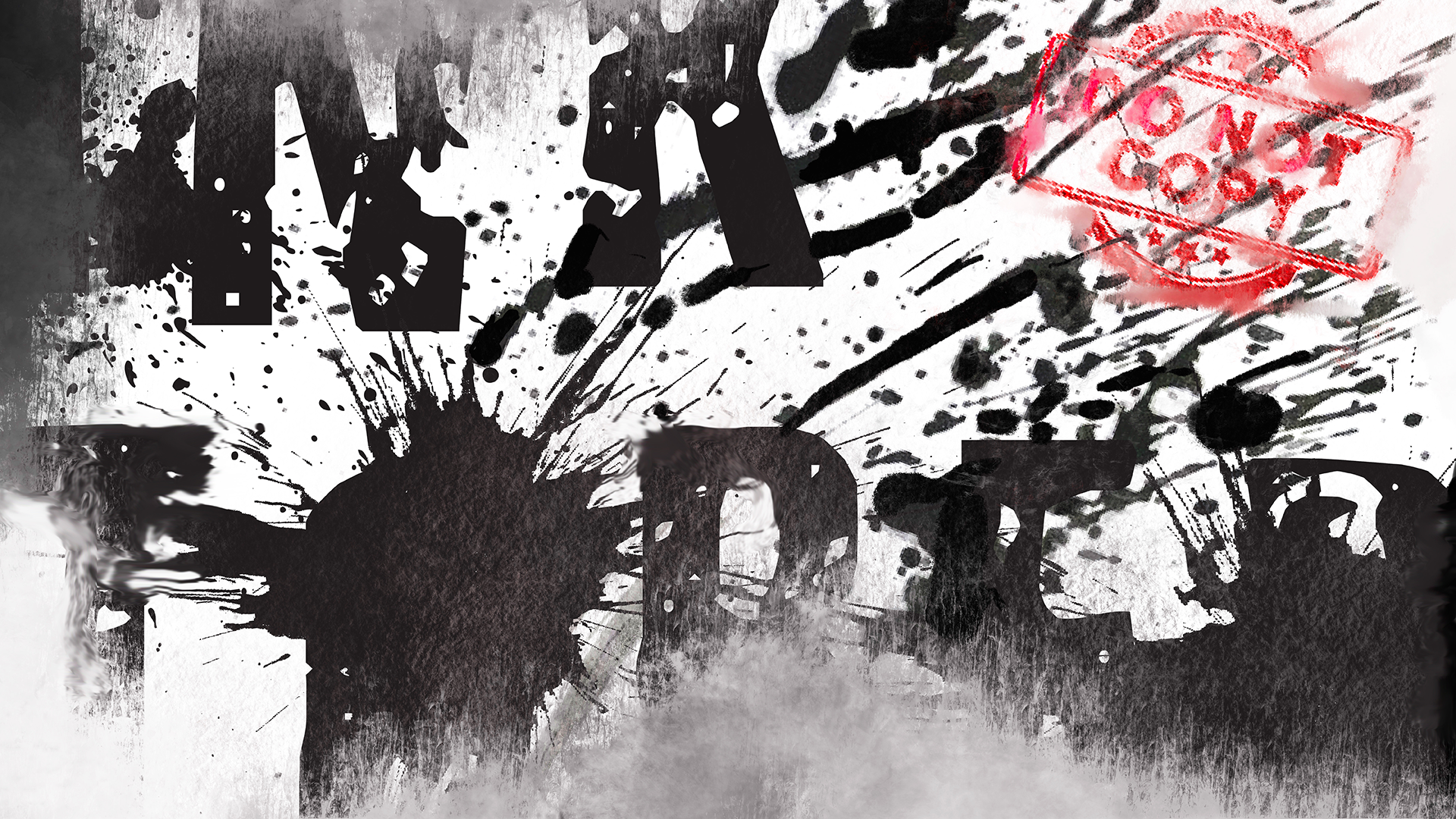 “Inktober All Year Long” was scheduled for release on Sept. 15, but in the wake of this controversy, its publisher Chronicle Books has withheld its release until further notice.

In a 57-minute video posted on YouTube on Aug. 26, Dunn claims that significant portions of Parker’s book, as well as its overall teaching methods, were lifted from his own workbook, “Pen and Ink Drawing: A Simple Guide,” which was published in 2015. A long-time presence in the online art community, Dunn is a widely-loved Black artist and teacher known for his tutorial books and videos on ink drawing. Dunn’s YouTube video is a detailed cross-examination of the many previews of “Inktober All Year Long” available online, against pages from Dunn’s own book.

The similarities that Dunn points out between the two books are numerous and far-reaching, ranging from overarching similarities in the books’ overall layouts and structures to near-verbatim lifting of phrases, exercises, and illustrated elements from Dunn’s workbook. In one  instance, Parker uses a similarly laid-out gradient bar exercises to his own teachings on value, and the same when illustrating form; namely scaly, bumpy, and furry textures all presented on cubes.

Dunn also continuously points out that Parker’s book follows nearly the exact same order as his own and sometimes even copies its presentation in major ways. For example, Parker’s illustrations of conventional ink tools are drawn at the same angle and presented in a similar manner, and his subsequent “Additional Tools” and “Unconventional Tools” sections list the same tools and descriptions as, and contain similar illustrations to, Dunn’s own book. Towards the end of the video, Dunn then showcases numerous drafts of “Pen and Ink Drawing,” as proof of his highly detailed planning process when making his own book.

These allegations come in the wake of another controversy surrounding Parker in 2019, when he trademarked the “Inktober” name. Founded in 2009, Inktober was a daily art challenge taking place throughout the month of October, during which artists would create one drawing every day based on an official prompt list released by Parker. Many saw Inktober as an event to bring artists together each year, and the word was nothing more than a “term shared among the art community.” However, this vision of community spirit was shattered when, following the trademark, Parker’s legal team sent a slew of cease-and-desist letters threatening legal action against hundreds of artists selling work with the Inktober name on it (including, but not limited to, sketchbooks of their Inktober drawings).

When confronted, Parker feigned ignorance and claimed he had an “overzealous lawyer” before proceeding to enforce a specific set of rules for Inktober-related work which, if not adhered to, would result in Parker taking legal action against any non-compliant artists. Artist Christine Knopp condemned the decision as “predatory,” and a hypocritical decision for Parker, who was capitalizing on the very artists who had made Inktober, and his work, popular in the first place. Now, to some, this new plagiarism controversy is a continuation of Parker’s growing arrogance as a heavyweight in the online art community, and the possible beginning of a trend of disregard for his fellow artists.

Dunn’s video has received polarized responses from the art community. Some skeptics have given little credence to his accusations, arguing that no single artist can “claim that he has a monopoly on basic fundamentals,” and that Parker’s use of instructional methods similar to Dunn’s should not necessarily amount to plagiarism. Speculation that this accusation is “just a [publicity] stunt so people hear about him” is rife amongst Dunn’s detractors, and is a common sentiment in the comments sections of both Dunn and Parker’s profiles.

A response video by Art YouTuber MOLOCH highlights these doubts, noting that the overall structure of the exercises in both Dunn and Parker’s books are similar to that of many other illustration courses offered online and in other books. Additionally, MOLOCH points out that certain exercises which Dunn accuses Parker of plagiarizing from his book, such as creating gradient bars, and teaching texture and form through scaly, bumpy, and hairy textures specifically, are well-known exercises used throughout drawing programs for all ages.

Conversely, Dunn has also found many supporters online, who believe that the similarities between the books are too close for comfort, and that Parker has committed pedagogical plagiarism. For Dunn’s supporters, his accusations are “not about “owning” fundamentals,” but rather, Parker’s use of the “almost exact terminology and phrasing, same titles, same diagrams… and so much more.” One commenter also pointed out that Parker’s customary style of ink drawing is not reflected in the previews of “Inktober All Year Long” — rather, it is visibly Dunn’s style of art.

Bolstering these claims is a photo set of several pages from “Pen and Ink Drawing” that Parker posted on his official Inktober Instagram account on Jan. 21. The post not only credits Dunn and his book as a source, but also praises his teaching techniques and provides an affiliate link to purchase the book itself. The link has since been deleted. 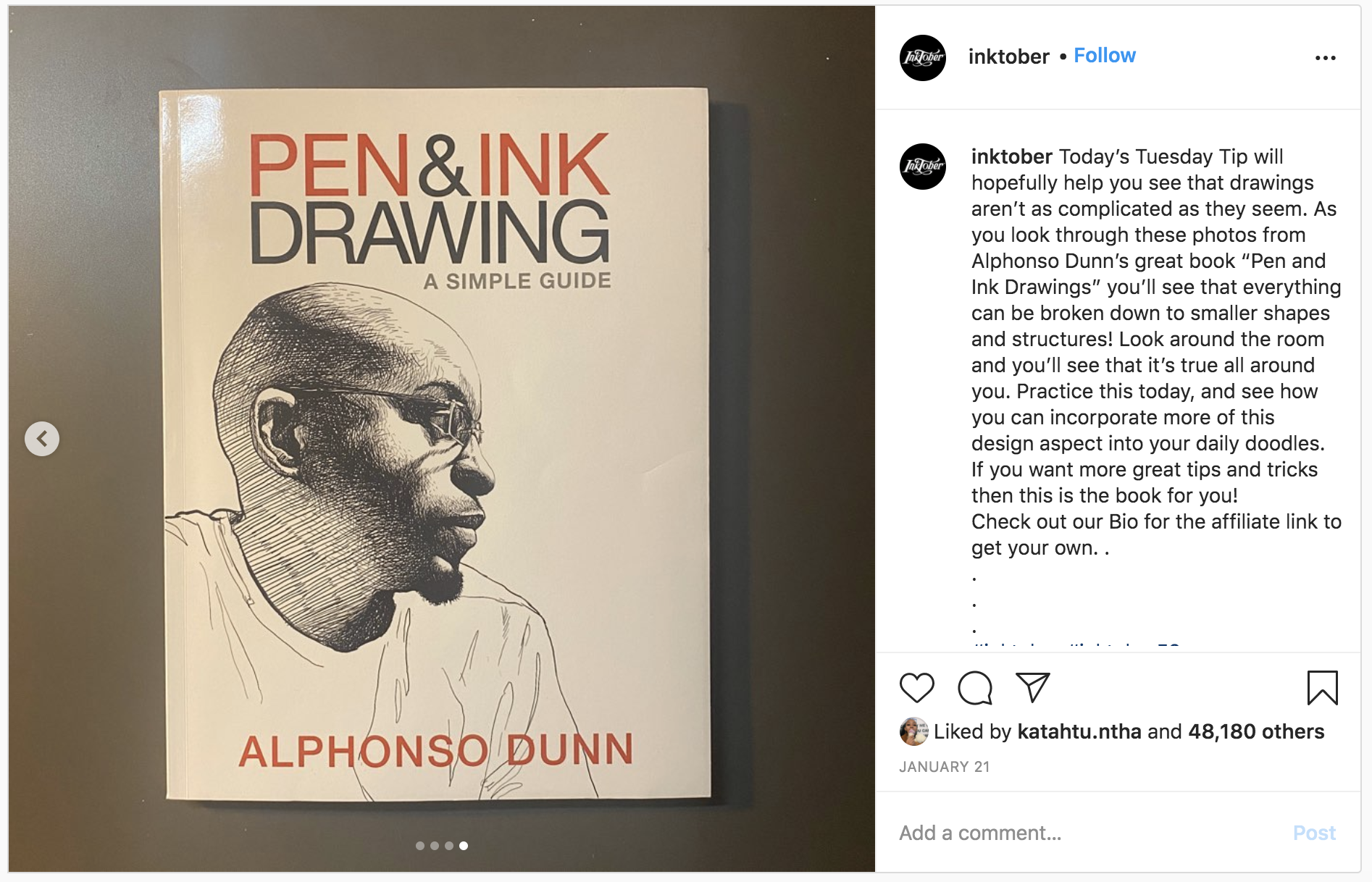 There are also those who do not feel comfortable siding with either Parker or Dunn yet. In her own YouTube video on the matter, artist Hannah England expresses doubt over how much of Parker’s book can truly be considered “plagiarized,” as many of Dunn’s accusations revolve around the usage and presentation of concepts that are “standard knowledge to share with new learners,” such as finger, hand, and arm position when drawing. However, England then points out that the extreme visual similarities between the illustrated elements of Parker and Dunn’s books are suspicious at the very least, given that “there are multiple other ways that [Parker] could have explained a tried-and-true concept in a more ‘Jake-specific’ way.”

Other critics of Parker find Dunn’s accusations especially damning with the art community’s current conversations about marginalised creators. The very notion of Parker, a white man, allegedly stealing a Black artist’s work and attempting to pass it off as his own flies in the face of not only the art community’s initiatives, but also the worldwide initiative to promote diversity and uplift marginalized communities. In the eyes of these critics, Parker’s actions are “heinous” and “elitist.” If the allegations prove to be true, and his book still eventually continues to print, Parker will become yet another white artist who was allowed to fail upwards at the expense of a marginalized creator.

Parker has not gotten off scot-free in the wake of this accusation. Besides the postponed release of “Inktober All Year Long,” Parker was dropped as a guest at the LightBox Expo online convention. A now-deleted tweet from the LightBox team cited “many DMs and emails” about Parker as the reason for this decision.

On the same day, DeviantArt cancelled the 2020 Inktober Awards, a site-wide art event in collaboration with Parker that had only just been announced four days prior on August 24th. In a Twitter post, DeviantArt stated that “pausing” the Inktober Awards “was in the best interests of their community,” and wanted all their campaigns to “reflect a mission of support and inclusivity.”

At the time of writing, Dunn has not conclusively indicated if he is pursuing legal action against Parker. On the other hand, Parker took to Twitter to staunchly deny Dunn’s accusations. However, Parker’s sparse tweet provides no additional defense of his own position, claiming that he has been “advised against going into further detail” due to “potential legal aspects,” but expects “his approach and work will be upheld.”

3 Responses to More Than Sketchy: Inktober Creator Accused of Plagiarism