Capstone classes are required for undergrads. But what if we can’t get into them? 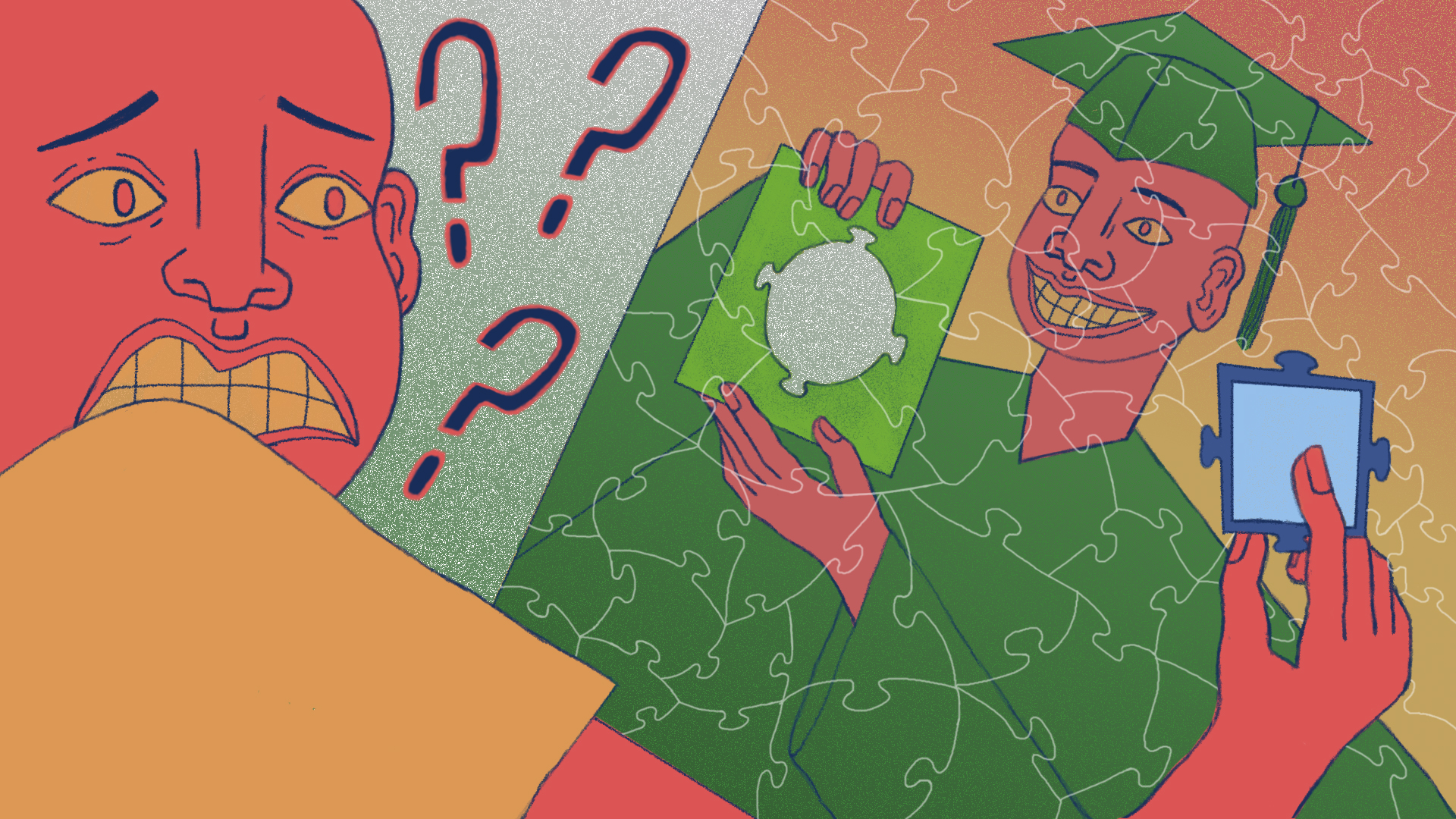 This is a compilation of responses to our first “F Question,” a campus-wide poll. The question asked: Were you able to get into the capstone of your choice? Keep an eye out for our next F Question on our social media, newsletter, and in the painted F Question boxes around campus.

In archaeological terms, a “capstone,” as defined by Oxford Dictionary, is “a large flat stone forming a roof over the chamber of a megalithic tomb.” It’s the last stone you put in place. (Incidentally, it kind of resembles a graduation cap.)

In School of the Art Institute of Chicago (SAIC) terms, the Capstone is the third and final Academic Spine* course that undergraduates must complete. Typically taken by graduating seniors in their final semester, SAIC’s website says the Capstone “assesses your strengths and weaknesses in your studio and/or scholarly practice through intensive mentoring,” leading to a “culminating, end-of-year event,” like an exhibition or a performance.

The Academic Spine is a relatively new advent. First introduced in 2001, Sophomore Seminar only became a BFA in Studio degree requirement in the 2010-2011 academic year, followed by Professional Practice Experience and Capstone in Fall 2015. Per an excerpt from the NEXT Strategic Planning document, Sophomore Seminar was designed “in concert with SAIC’s goals for improving retention rates.” Some faculty suggested the Spine was developed in anticipation of SAIC’s 2013 re-accreditation process, but Interim Dean of Undergraduate Studies maintains that “there is no direct relationship between our accreditors, our accreditation procedures, and the development of the Academic Spine.”)

Because of class size restrictions, some students are unable to take capstones focused specifically on their practices. In addition to missing the chance to develop their core work, this group can face tuition concerns. They must choose between paying additional tuition to the most relevant capstone in a subsequent semester, or devoting tuition dollars to a course only tangentially related to their practices. “I’ve had classmates talk about irrelevant coursework as it pertains to their career path,” wrote Santiago, a graduating senior in the Department of Painting and Drawing. “At $1,666 per credit hour, this should not be happening.”

After hearing reports from students who ended up in Capstones outside their main area of focus, we decided to dig a little deeper. For the first campus-wide F Question survey, we asked students: “Have you been able to take the capstone course of your choice?” Students could answer “Yes” or “No.” For “No” respondents, we provided space for them to explain how it would affect them. Of nineteen responses, ten said answered “No” and eight answered “Yes” (one failed to specify, but wrote out lengthier opinions).

Wayne Tate Jr. was one of three Comics students to answer “No.” Describing the fallout, they said, “I need to appeal to the school board otherwise I may end up being unable to complete my requirements… There is only one Capstone class relevant to my practice, and it filled up quickly.” Indeed, only Beth Hetland’s Publish or Perish Capstone focuses specifically on comics.

A frustrated Photography student wrote, “It makes sense to take an exit Capstone course that coordinates with my practice . . . I am 12th on the waitlist for the ONLY photo Capstone class. 12th? That could be another photo class.” Another student drew attention to the disproportionate balance of Painting and Drawing capstones (four) compared to the absence of any Performance-focused courses.

Students happy with their capstones had relatively little to add. Only one anonymous respondent wrote, “Seems like a non-issue to me!”