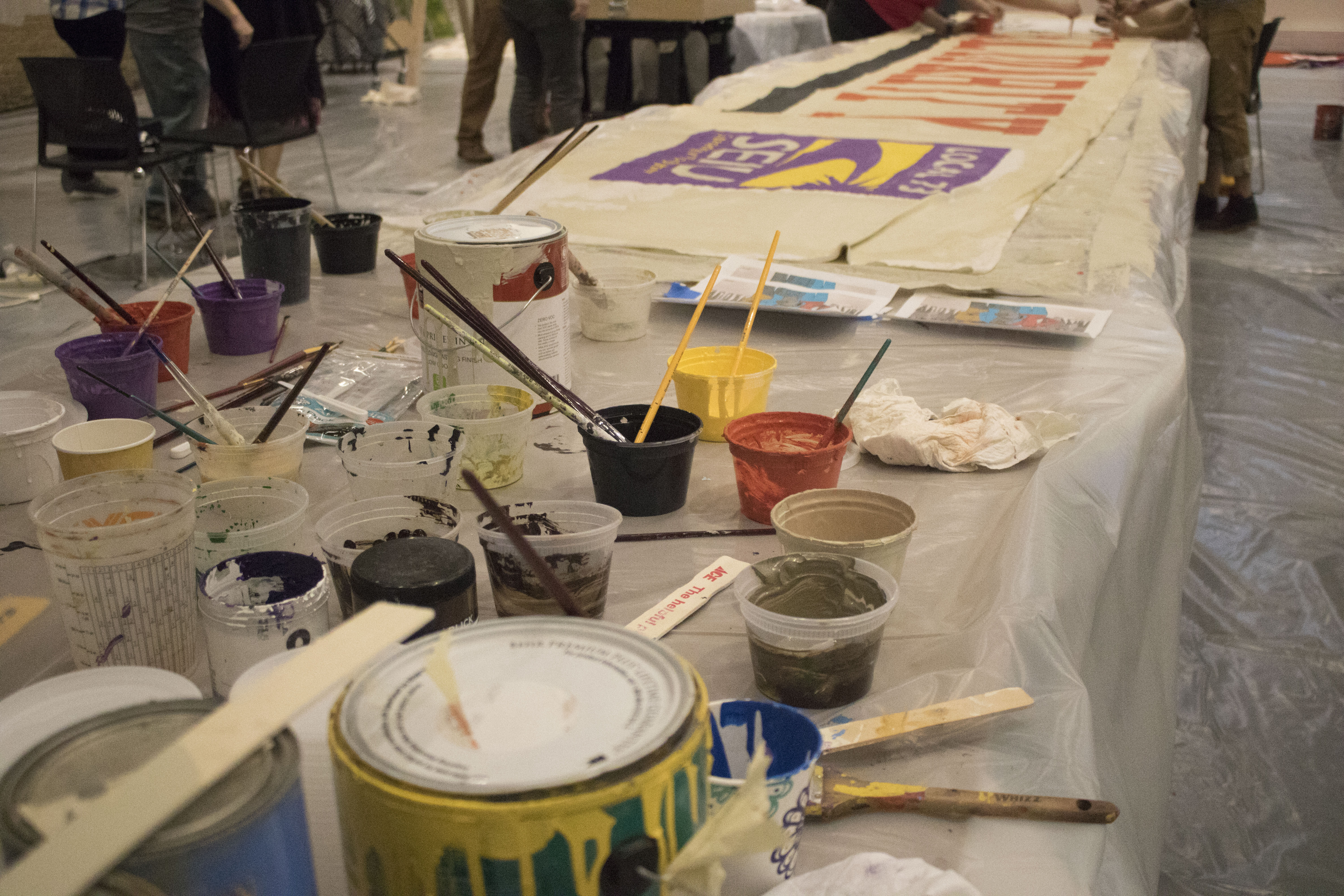 Painting materials sit atop a banquet table, along with an over eight-foot-long banner to support the Local 73 chapter of Service Employees International Union (SEIU). Photo by Olivia Canny.

Two sets of paint-covered helping hands grip the edges of a 10-foot long canvas banner, and take a cautious turn down the staircase of the Chicago Teachers Union’s (CTU) headquarters in West Town. It is day two, hour five of their community artmaking event, and the building’s walls are lined with picket signs and canvas sheets of various sizes, sporting graphic illustrations of smiling faces, and crisp text: “A NURSE IN EVERY SCHOOL EVERY DAY! PRIVATIZATION IS THE PROBLEM!”

On Sept. 26, the CTU voted on and approved a potential strike for Thursday, Oct. 17. They wasted no time in seeking provisions, arranging for Milwaukee-based Art Build Workers to bring their enthusiastic brand of art and activism to the Chicago community on Oct. 5 and 6. At the time of the art build, the likelihood of the strike rested on whether or not Mayor Lightfoot would officially commit to the CTU’s demands. Since the art build, however, the CTU and Chicago Public Schools (CPS) have finalized the strike.

When speaking about the fate of the banners and signs, volunteers at the art build use the word “potential” before referring to the strike. But even without a specific cause for artmaking, the event offers a means for community building, too.

Joe Brusky manages social media and organizing for Milwaukee Teachers Education Association (MTEA). He travels around the country with Art Build Workers, documenting many of their builds and even attending strikes, like that of United Teachers Los Angeles this past January. He notes that the art builds “make it easy for people to share in the images and what’s happening,” adding that participants can experience the equity involved in the communal painting process as it moves into the subsequent marches and demonstrations.

For the CTU and their ally in the cause, Service Employees International Union Local 73 (SEIU), the art build also offers a means for developing their identity and image, already defined by the CTU’s brand of bright red, and SEIU’s purple. Eric Ruder manages communications for the CTU, and he has a background in graphic design, so he had some specific priorities surrounding what imagery to paint, screen print, and stencil at the art build. Ruder notes that the process started with submissions from local artists with portfolios rich in social justice art, adding that a key criteria was “a balance between graphic art and faces of diversity.”

On the relationship between the CTU and Art Build Workers, Ruder says, “we knew about them, and they knew about us.”

Art Build Workers was founded in 2018, initially organizing alongside groups fighting for social justice causes, including immigration rights and gun regulations. Within the past year, they started working closely with the National Education Association (NEA), directing much of their efforts into education activism. Art Build Workers co-founder and professor of Art Education at the University of Wisconsin’s Peck School of the Arts Kim Cosier outlines the process In a scholarly article about art builds as a labor and art practice: NEA helps the Art Build Workers team connect with teachers unions to identify themes and slogans for designs, and reach out to and collaborate with community artists. Art Build Workers discusses the designs with the union and finalizes their form; then they seek out a space that can accommodate stations for food and artmaking for participants of all ages; and finally, they join their partners and volunteers the streets, combining art and action. Much of the material is crafted with longevity in mind, donning slogans and images that align with the overall mission of the union or partner, and could support their cause for years to come.

UTLA’s priorities are not so different from the CTU’s, which include lower class sizes for each student age group, ensuring that every school has a nurse on staff for every day of the week, and hiring more social workers and counselors to even the ratio to students and meet the national standard. Currently, CPS employs 349 nurses who circulate among 520 schools as needed: one counselor for every 500 students, and one social worker for every 700 students.

Volunteers at today’s art build are concerned about the lack of arts education, specifically for students in lower grades. Samuel Kryczka is a 3rd grader at Beaubien Elementary School, where art classes are only taught students in 4th grade and up. He’s from a family that values arts education; his father, Marion Kryczka, taught painting at SAIC for 30 years. Samuel’s school offered art classes for students his age last year, and even though he’ll definitely be able to study art next year, he expresses concern for his younger brother, who is currently in 1st grade. 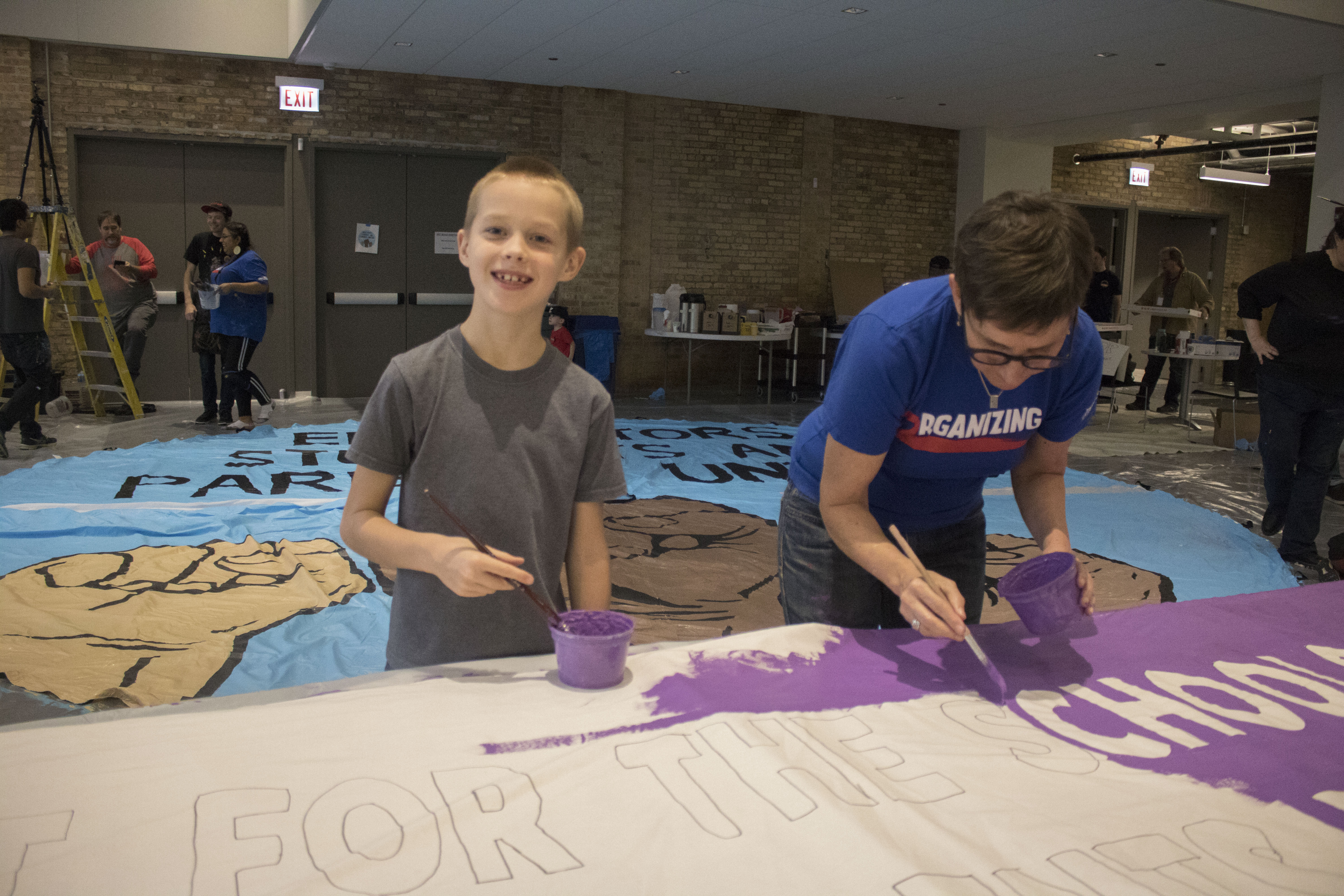 April Tondelli’s son is in kindergarten at Belding Elementary School and isn’t able to take art classes. “He loves art,” Tondelli says, noting her own disappointment in the lack of arts education. “It activates parts of his brain that he wouldn’t normally use.” Both Tondelli’s son and Samuel take art classes after school through Chicago Park District, whose workers also plan to strike alongside the CTU.

Mike Applegate is an alumnus of SAIC’s Master of Arts in Art Therapy and Counseling program. He’s at the art build with his pre-kindergartener, and even though she won’t be attending a Chicago public school, as the two live outside of the city, Applegate has personal concern for students who are part of the CPS system. He practices at a therapeutic day school through a private alternative education company called Camelot Education. Many students who come to the program from the Chicago public school system, and Applegate says that these students are markedly troubled, as their schools lack the resources — like art classes and social workers — to address childhood trauma.

Among the SAIC alumni at today’s art build is William Estrada, a practicing artist and teacher who completed both his BFA and MAT at the school, and has lectured there in the past, too. Currently Estrada teaches at the University of Illinois at Chicago, and at Telpochcalli Elementary in Little Village. The prints that he’s working on today are contributing to the weekend’s total production of 3800 picket banners, patches, and poster signs. Estrada was a key organizer in the partnership between the CTU and Art Build Workers, and says that he wanted to prints to include graphics that emphasize the faces and concerns of marginalized communities, an aspect that aligns with both his creative and social practice and the issues that the CTU wants to call attention to with the upcoming strike.

For information and updates about the CTU and the strike, visit https://www.ctulocal1.org/.