Photographer Brendan Hoffman documents the daily grind of war in the Donbass region of Ukraine. 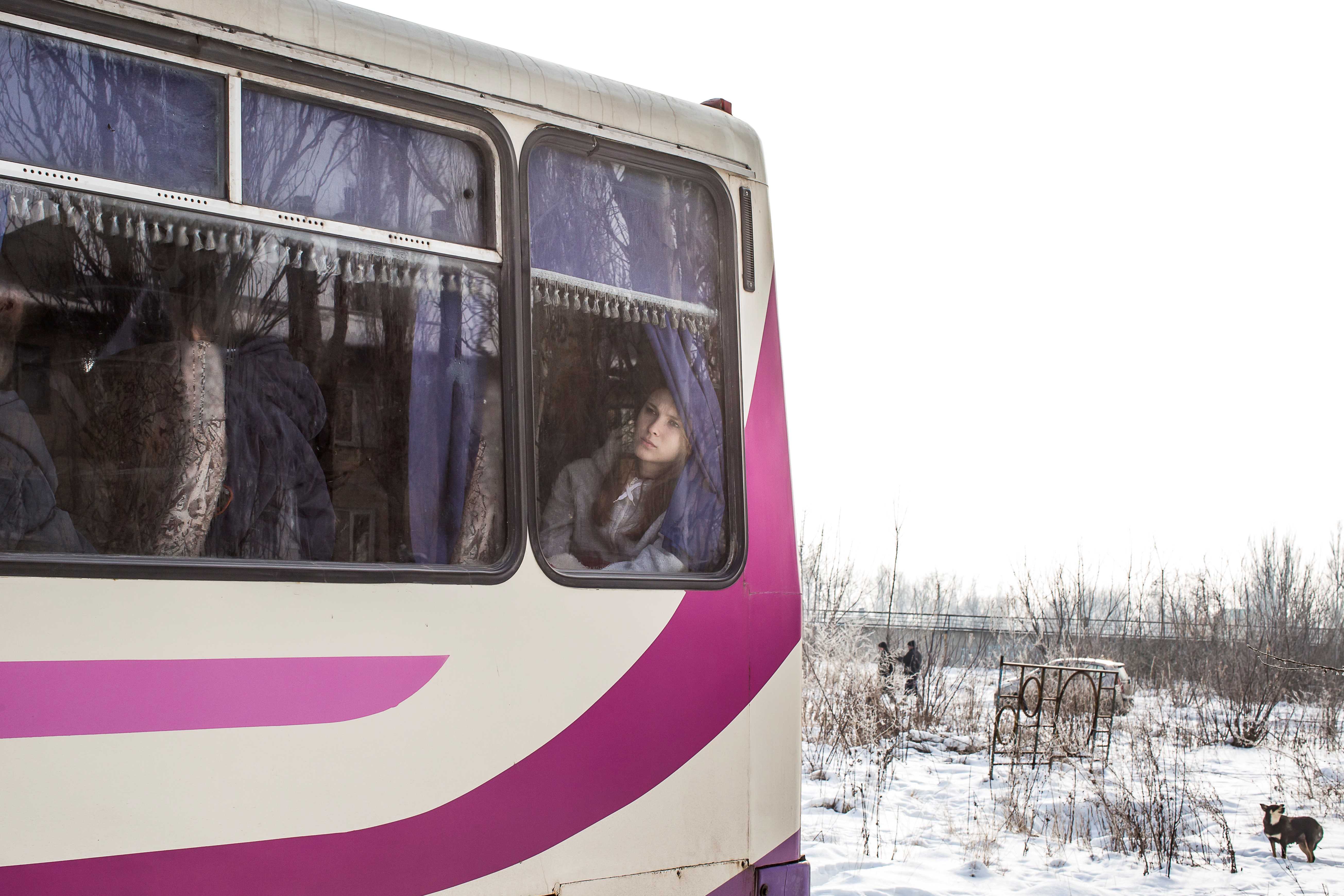 “Evacuation,” by Brendan Hoffman. A girl stares out the window of a bus evacuating women and children away from fighting. Avdiivka, Ukraine. February 2017.

“Brotherland: War in Ukraine,” currently on view at the Ukrainian Institute of Modern Art (UIMA), consists of the work of documentary photographer Brendan Hoffman, who is based in Kyiv, Ukraine. Hoffman has contributed to Time Magazine, Newsweek, and The Wall Street Journal. “Brotherland” incorporates not only his photographs, but also an artist-published newspaper and three 360-degree virtual reality experiences.

Hoffman, who is currently a Fulbright Scholar developing a new body of photographs focused on the Ukraine, began working there in 2013. Hoffman’s concurrent projects include photography examining water resources in Pakistan and the decline of blue-collar jobs in Middle America. He first started documenting the Maidan protests in Kyiv, which began as an opposition to then-President Viktor Yanukovych’s failure to sign an association agreement with the European Union and ensuing violent crackdown on protesters. Since 2014, Ukrainian forces have been at war with Russian-backed separatists in the Donbass, a region in Eastern Ukraine, displacing more than 1.7 million. More than 13,000 people have been killed since the start of the war, and despite temporary ceasefires, the violence continues. 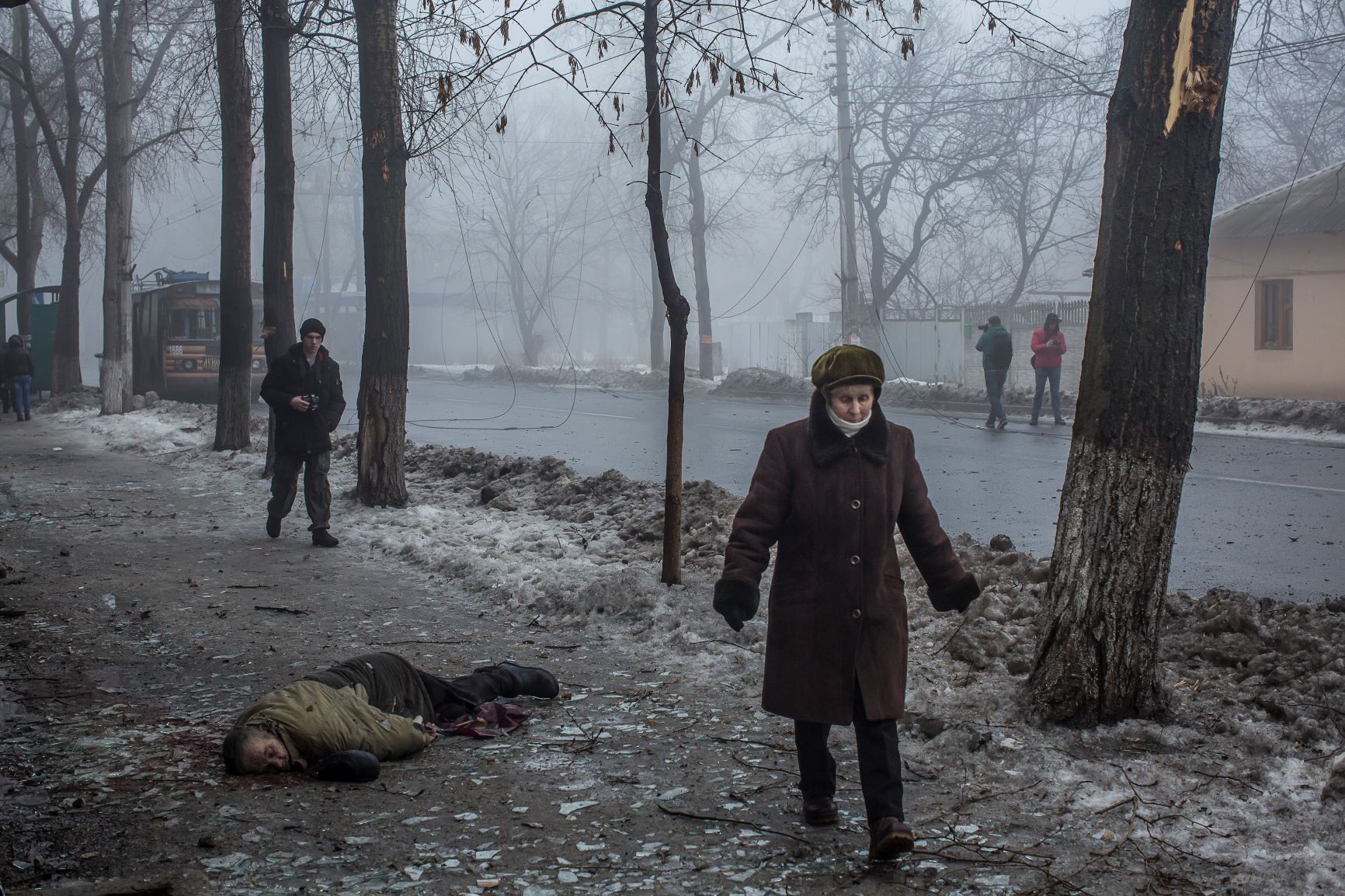 “Untitled,” by Brendan Hoffman. A woman walks past the body of a man killed on the sidewalk when a rocket struck the road near a bus stop. Donetsk, Ukraine. January 2015.

Hoffman’s photographs demonstrate how the war affects individual people in all settings of their daily lives. The people in his images are photographed in a range of places, from students in a school to families at a funeral. In the midst of the bleakness, some of the compositions have such brilliant colors that they almost appear oversaturated. Dead bodies are also clearly depicted, but these photos didn’t feel over sensationalized. Instead, his documentation of violence remains even-keeled.

The figurative photography is coupled with photographs of lingering non-human remnants from violent attacks, such as the debris from a plane attack. One piece, which felt the most abstract out of all of the documentary photographs, depicted brightly-colored clothing strewn over long grass. The colors are echoed by the wildflowers, which sporadically pop up between long blades of grass. The image of a similarly deserted field shows dead grasses that have been bent by a plane crash. The wing of the plane can be seen in the frame. The composition is made more intense by the photographer’s angle, gazing up from the ground level, which places the viewer at the same height as the grasses and reveals the underside of the plane. 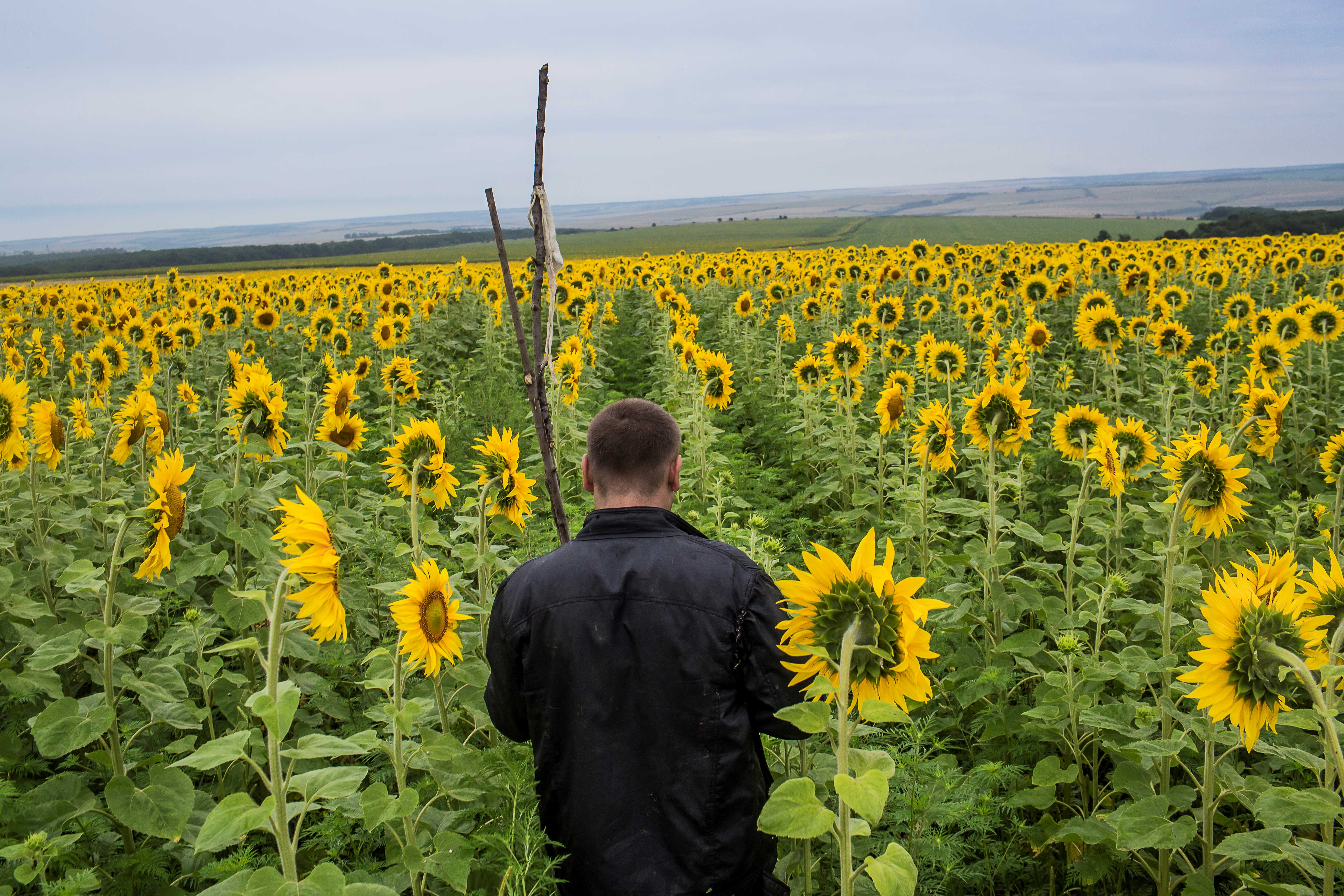 “Sunflowers,” by Brendan Hoffman. An off-duty coal miner searches a field for debris and human remains from the crash of Malaysia Airlines flight MH17 after it was shot down by rebel fighters from the self-proclaimed Donetsk People’s Republic. Grabovo, Ukraine. July 2014.

The virtual reality videos are set in sites Hoffman photographed in 2014 and 2015. One video was taken from within a burial yard filled with colorful flowers placed on tombstones. The video angle was taken from a height taller than that of a human, which allows the viewer to observe the entire landscape in detail without feeling immersed in the scene. Colorful painted crosses made out of what look like non-functioning plumbing piping stand in contrast with the tan fields of grasses bending in the wind.

Another video, set in a passageway at a school, shows children playing in the hall and moving from one classroom to another. The children, who range in age, are arranged all around the viewer’s pivot point. They walk alone or stand talking to one another, nearly all of them making eye contact with the camera multiple times in the video. The curiosity in their gaze seems shared by the photographer. Hoffman’s images carefully examine the many facets of living in a war torn region and documenting its families and ideological divisions with compassion.