The Human Cost of the World Cup

The silence of the Global West over the mistreatment of migrant workers in Qatar is disappointing. 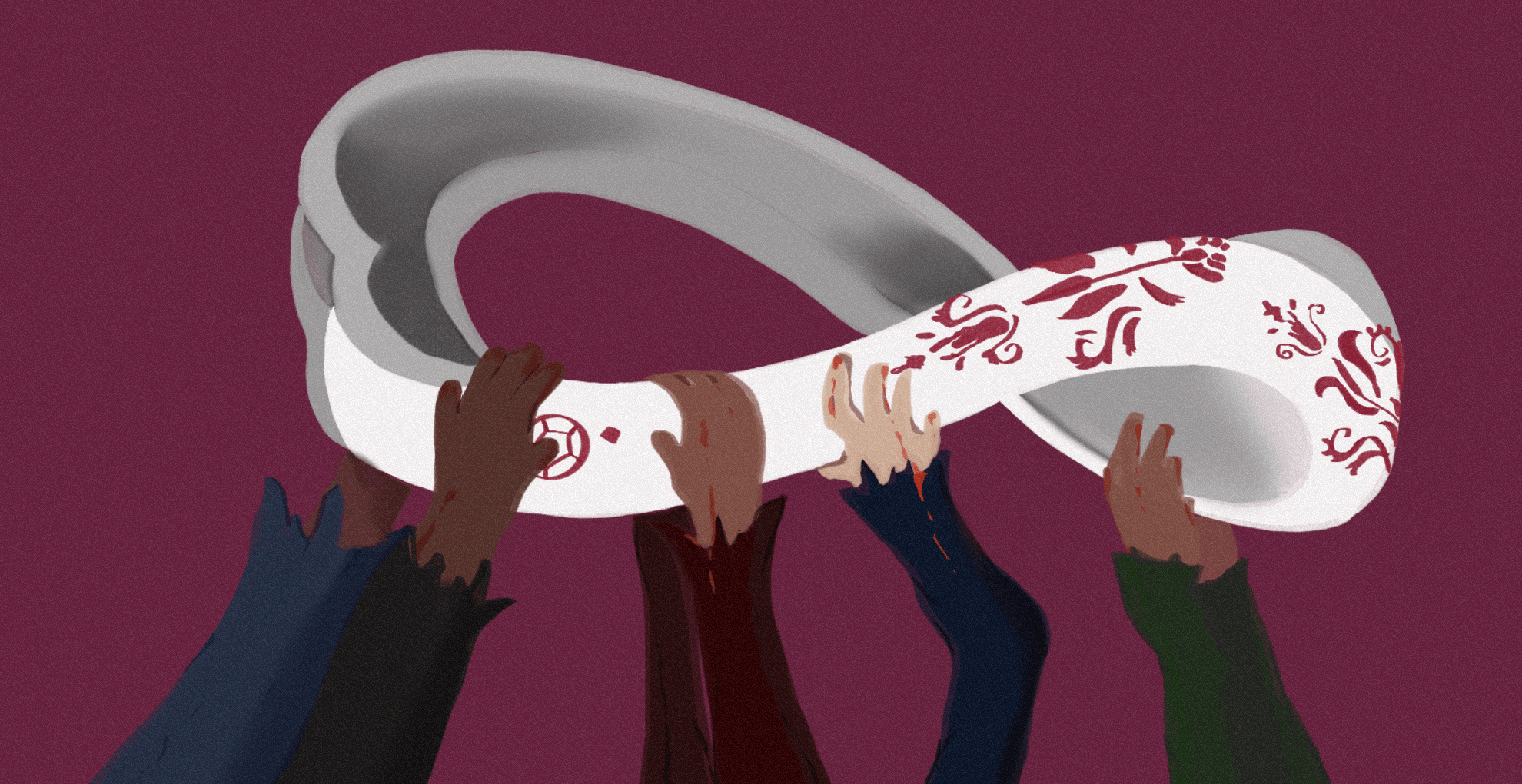 A few days ago, I was talking about football (or soccer as Americans like to call it) with my younger brother. I have never been a football fan. Never have I compromised my beauty sleep to watch football matches at midnight. But my brother, who lives in Nepal, is of a different breed. He’s obsessed with the sport. He starts his morning by playing FIFA on his PlayStation. His dream is to play in an international stadium and succeed like his heroes – Cristiano Ronaldo and Lionel Messi.

So when we started talking about the 2022 FIFA World Cup, he expressed his excitement. However, I didn’t share the same feeling. I was mad seeing him and the whole world thrilled about something that we all should be collectively angry about.

“How can you watch the World Cup when thousands of Nepali people died and were tortured while building infrastructures for FIFA and Qatar?” I asked him with rage, spilling water over his excitement.

Every four years, the International Federation of Association Football (FIFA) organizes a football World Cup tournament which is played among different national teams. Winning the right to host the world cup is a matter of prestige. So in 2010, when Qatar won the rights to the 2022 FIFA World Cup, all eyes were glued on the small nation. Building multiple stadiums in a limited time that could accommodate thousands of fans was a huge task, somehow impossible for the Arab nation. Yet after 12 years, Qatar completed the mammoth task by building eight massive stadiums and infrastructures that can welcome thousands of people worldwide.

As the 2022 FIFA World Cup entered its second week, thousands of people have already sat in these stadiums. In the coming days, more people, some really significant ones, shall sit and cheer for their countries, hoping their team brings the World Cup to their homes. But in those loud cheers, will any remember the cries of migrant workers who died while constructing the stadiums? Will anyone speak for them?

Biggest football tournament. But at whose cost?

Qatar, a country filled with wealthy sheikhs, mostly imports its laborers. According to Human Rights Watch around 95% of the labor market in Qatar is occupied by migrant workers, who mostly come from the Global South, especially South Asian countries like India, Nepal, Sri Lanka and Pakistan.

Data provided by the Department of Foreign Employment, Nepal, shows that around 184,926 Nepali workers left Nepal for Qatar last year only. However, even if Qatar is a major destination for workers of the Global South, it’s not a comfortable and safe space to work. The extreme heat, the unfair labor laws and the constant exploitation make it difficult for workers to sustain themselves. Perhaps, that’s the reason why almost 6500 migrant workers lost their lives over 10 years since Qatar won the hosting rights. Among those who died, 2100 (almost one-third) were from my country Nepal. Most of these workers had taken loans hoping they would send their hard earned money to their homes. But sadly, they returned to their birthplace in coffins. And those workers who were lucky to survive death faced discrimination, mental abuse and workplace violence, according to an investigation conducted by Equidem, an organization that works for labor rights.

Unfortunately, even after so much evidence of violence and human rights violations, neither FIFA nor Qatar are acknowledging the human loss that took place. None of the deaths that destroyed the families of the workers was investigated. And to add salt to the wounds, instead of empathizing with the families of bereaved souls, both Qatar and FIFA are outright denying the deaths and calling the criticism “unfair.”

“I have difficulties understanding the criticism. We have to invest in helping these people, in education and to give them a better future and more hope. We should all educate ourselves, many things are not perfect, but reform and change takes time,” said Gianni Infantino, President of FIFA, in a press conference held a few days before the first match. He even called all the critics “hypocrites.”

To be honest, I am not surprised by their denial. Where in the world have thieves admitted that they stole something, right? But what makes me angry is the silence of the West over this issue. I know my argument will be dismissed by some of my friends in America, as in the past few weeks, there has been an active discussion about human rights violations in Qatar because of the World Cup. A lot has been reported by the press, which is giving space to the stories of migrant workers and their sufferings. Qatar’s anti-queer policies and other stringent laws are also being widely discussed.

However, Washington, which otherwise loves to lecture on liberty and human rights protection, hasn’t spoken a word to extend its support to the victims. The lack of concern shown by the Biden government, for whom Qatar is a major ally, is disappointing. What also amazes me is that most people in the West are silent. Perhaps, I am expecting too much from people in the West. Though there are reasons for my expectations. The way the West, especially liberals, talk about human rights, makes me think that they are empathetic toward the sorrow of every person out there in the world. The way they try to use every public event to speak about social justice issues led me to think that they care for all kinds of people. The truth is they don’t. Their activism is selective and performative. For them, an “issue” becomes an “issue” only if people like themselves are impacted by it.

First, whatever is happening in the Global South, those issues and events are never considered serious. I mean, how many Western countries have acknowledged the serious humanitarian crisis caused by the World Cup and its impact on the lives of South Asian people? I know comparing two different situations might seem like a logical fallacy but honestly, people from the West, ask yourselves: Were you even aware of the issue I am raising before you read this article? I am confident that you know about the restrictions set by FIFA for the players to wear ‘One Love’ armbands during the matches. You might have read it or were surrounded by people who talked about it.

However, during those discussions you had in your bars while cheering for your favorite team, did any of you address the issues of migrant workers? When Russia attacked Ukraine, many countries from the Global North released a statement saying they wouldn’t play a sports match against the Russian team. This was their way of showing solidarity with Ukraine, where many people were killed because of the Russian attacks. I know comparing the situation between the Ukrainians and the migrant workers is like comparing apples and oranges. Still, I am forced to make this comparison because of the polarizing reactions of the West and many of its people toward both situations.

When the Guardian reported the misleading statistics of the deaths in Qatar because of the World Cup, why did you still remain silent? Where is the outrage, West. Where is it?

Why is it that a bombing in Paris and a shooting in New Zealand lead you to change your profile picture on Facebook with their flags, but floodings in Pakistan, the spread of Islamophobia in India by the Modi government, and the destruction of Afghani lands make you silent? Why is it that you can hang Ukrainian flags in your homes, buildings and restaurants but can’t speak up for people who are from different races and cultures when we have been facing the same violence?

Seriously, West, when are you going to take responsibility for the damage you and your colonial ancestors have caused? From looting India during the British Raj, killing three million people by a famine caused by your ‘leader’ Winston Churchill about whose greatness you still make movies, discriminating against the soldiers of Nepali origin who once fought for the colonial queen of England to exploiting Bangladeshi labors who pay price for your cheap clothes, at different epochs of history, you and your ancestors have created pain in our lives that still haunt us.

Not every one of you is shaped by the racist beliefs that your ancestors popularized and have xenophobic attitudes toward us. Some of you are kind and empathize with us because you and us, we are controlled by a group of elites who capitalize on our sufferings. But when something happens to you and your people, we shed tears for them. We have stood for them and have extended our support. We have condemned the violence faced by your civilians. And we also expect the same from you.

I am not saying you should all boycott the World Cup or stop cheering for your countries. But can you acknowledge the pain this World Cup has caused in the lives of the workers and their families?

One Response to The Human Cost of the World Cup