It was, in every grim and sinister sense, a Monday. The rage was already political — post-Kavanaugh, pre-midterms, generalized fascism-induced anxiety. I was in the middle of editing an angry supercut about women being killed on film for class. I was severely apprehensive about the first staff meeting at a certain newspaper where I’d just been hired. And also, my dad was back in the hospital, getting another round of chemo on to treat the leukemia we’d thought was gone. So I had many reasons to feel full of impotent rage, as I hurried to the museum to complete an art history assignment I had left literally to the last hour.

As I stared down the barrel of this Monday, in the form of the long crosswalk on Michigan, I genuinely thought I might not be able to do it. I stood in a haze waiting for the light to change. A strange man offered me a pamphlet. I glanced at it.

As I reached for it, the wording confused me. Was this a pro or anti-abortion pamphlet?

Anti, I realized with a physical horror. “No, thank you,” I said. He shrugged and turned around to try someone else.

As another 30 seconds went by, waiting for the light to change, I realized with disgust that I was surrounded. “End Human Abortion” signs were everywhere, with graphic images and slogans to make my blood boil. I simmered until the light changed and I stalked across the street. They were on that side too. I glared at them as hard as I could. None made eye contact.

The organization, I soon learned, is called Abolish Human Abortion (AHA). They were out this Monday morning for a special nationwide operation to, according to their website, “Save America.” AHA are mostly Evangelical “Dugger-types,” F Newsmagazine Managing Editor Grace Wells later informed me. I’m from the Northeast, so though I’m aware of such groups, it was new to see them in person. It’s pretty upsetting.

I went into the museum feeling so angry I wanted to barf or maybe punch someone. I was angry at them and I was angry at myself for doing nothing, saying nothing. I’m timid even at the best of times, but I always wish I was more like my dad.

My dad is a fairly understated person, educational publisher by day and writer by night. I can’t actually think of a time I saw him tell a random protester where to shove it — like I said, we live in the Northeast, where there are not many abortion activists. But I knew without a doubt that my dad, currently sitting in a personal quarantine waiting for his immune system to regenerate, would have told those people to fuck right off. God, did I want that to be me.

In a haze of disgust at others and myself, I half-assed the assignment I was sent to the museum for and faced the reality that I could not get to my art history class without passing those people again. I was going to have to reckon with them and with myself.

I went. I waited on one side of the blustery street. The Evangelicals were there, but none approached me. I gave a dollar to a homeless guy and tried to feel good about ignoring them and being the bigger person. Didn’t work. I crossed the street.

Said by the Evangelical in front of me. He was blocking my way by offering a pamphlet to another passerby.

“Uh—” The passerby took it, experienced similar confusion to mine, then said “No, actually,” and handed it back to the Evangelical. He was a blond and toothy sort; he wasn’t actually wearing a sweater-vest, but spiritually, he was. He took the pamphlet back, shrugged, and said “How about you?” to me.

My time had come. And I did not back down. For once my level of rage was not enough to put a lid on and let simmer down. “Yeah,” I said and held out my hand.

He handed me the pamphlet. I took it. I tore it in half.

“Thanks,” I said, handing the pieces back to him. I turned around just in time to see his resigned anger.

“Oh, great. Thanks,” he said. “Well God still loves you!” he called after me as I strode away.

I was flooded with more adrenaline than was reasonable. Never had I so productively redirected my rage. I was also very satisfied with the idea of him having to figure out what to do with the two ripped pieces. Maybe this wouldn’t be the last time I told an anti-abortion activist where to shove it.

“God still loves you!” Yeah, I thought. He does. And you are going to burn in hell.

So. Did it make a salient, convincing opposing argument? No. Did it solve any political problems? No. But did it feel good? It sure did. And there is at least a little value in that for my political energy. So I say, go ahead — snatch your enemies’ papers and tear them up. Lower the discourse. It’s 2018. You know what they say about the personal and the political.

F+, Featured Tantrum: You and Your Pamphlets Can Go To Hell
« Previous Story 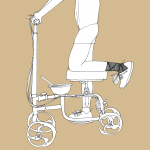