Artists’ work runs the gamut from subtle to heavy-handed. 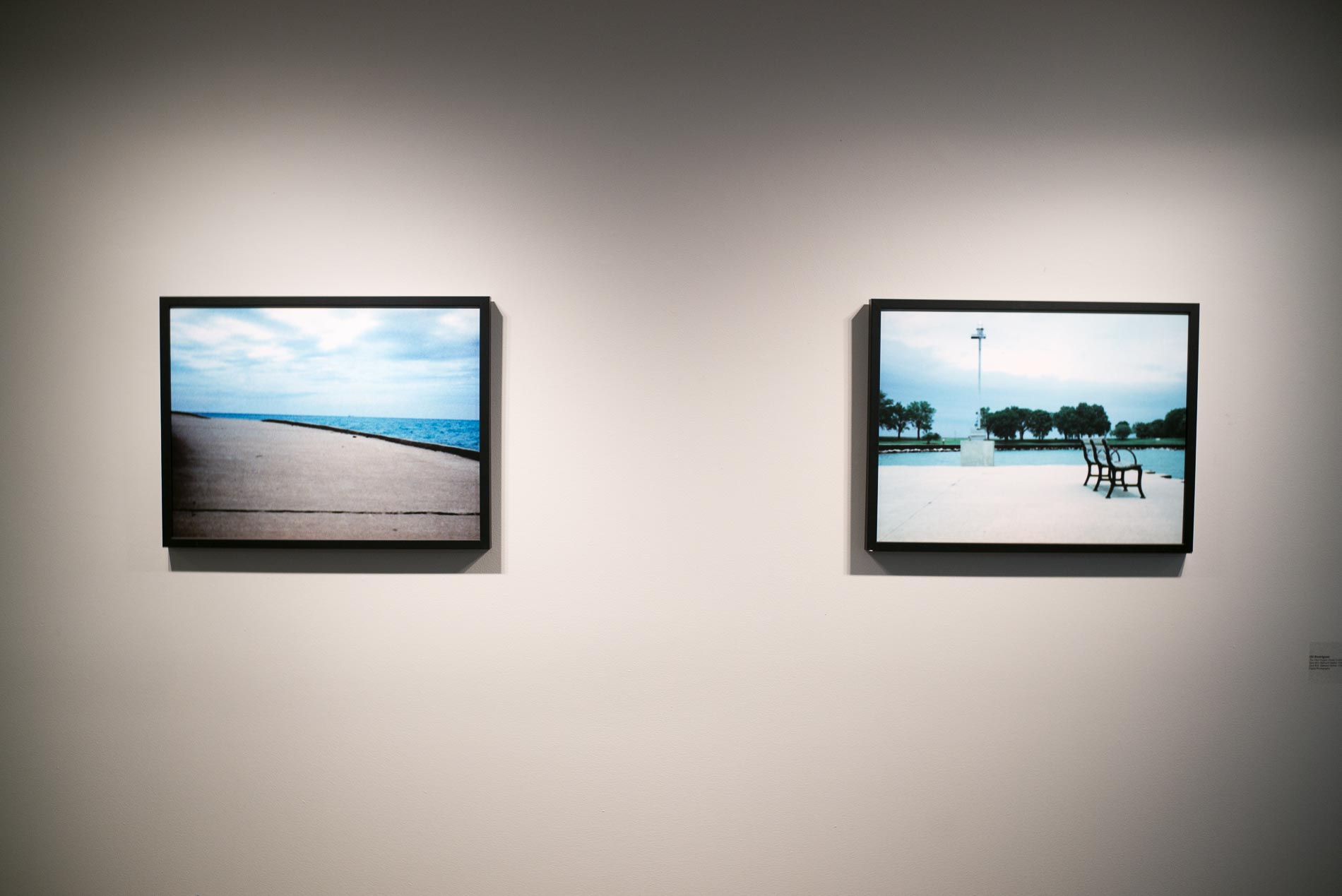 A s a part of this year’s Black Harvest Film Festival, the Gene Siskel Film Center is hosting a visual art installation called “Hot Seven: The Chicago Breakdown.” This show attempts to look at the idea of community through the lens of underrepresented and marginalized people: queer people, people of color, immigrants, and the children of immigrants.

The show makes some serious stumbles along the way, but in the end it’s largely successful. If Chicago’s usual art crowd is white, educated, privileged, and moneyed, then it’s obvious that this show does not exist to give comfort that crowd. It provokes unsettling questions, sometimes subtly, sometimes bluntly and angrily.

On the blunt and angry side, there’s Ricardo Gamboa, who is an artist, activist, academic, and, it would seem, an aspiring comedian. His video installation, “Internet Cinema Retrospective,” is a compilation of videos that look as if they were custom-made for distribution via YouTube.

Gamboa’s videos come off as a bit puerile and amateurish. They’re not very funny or original, and the critiques he makes aren’t particularly pointed or perceptive. His videos are more like bludgeons that are meant to irritate and anger.

In “The Fresh Prince of D.C.,” Gamboa portrays President Obama as a sellout who prefers sipping champagne with white supermodels to enacting immigration reform; the video conveniently leaves out the relentless opposition Obama faced in Congress. Republican opponents are mentioned just once, and then only to imply that Obama is secretly in league with them for the sole purpose of preventing immigration reform.

Gamboa’s approach can be troubling. In “RE: Trump, an Open Letter to SNL and Producer Lorne Michaels,” Gaboa rants into the camera, furious about Donald Trump’s November 2015 appearance on Saturday Night Live. He skewers the show for giving Trump a platform, and for stereotyping Latinos in its skits while employing so few Latino comedic actors.

But rather than leave it at that, Gamboa goes on to perform the sort of stereotypes SNL specializes in: the cholo, the tall and dark Latin lover, the spicy Latin gay man. Then in a moment of clumsy satire, he then declares himself “so Mexican” he can pull guacamole from his ass.

This video merits little beyond a few cheap laughs. He does nothing to subvert the stereotypes; he merely repeats them. The whole video seems a bit tossed off. Even after he mimes pulling guacamole from his ass and coats his middle finger in it, the act is so ill-timed that when he licks his finger clean it’s not funny or shocking — it’s predictable.

In one video lampooning Arizona’s deeply racist anti-immigration legislation known as SB1070, Gamboa appears in in whiteface, transformed into a propagandistic Mr. Rogers, who goes on to educate children on the dangers of “evil Mexican aliens.” It is a bit pedantic, but to the point.

One thing that is troubling about the Mr. Rogers video is that the evil, white antagonist who directs “Mr. Roger’s SB1070 Neighborhood” speaks in a stereotypical Southern accent. It’s hamfisted code for ignorant, low-class, white racist; and it’s a vast oversimplification.

It’s disconcerting that an artist concerned with race, justice, equality, and marginalized peoples would stoop to this level. Suggesting that the only kind of racism that exists is the blatant, out-in-the open kind depicted in the video lets a whole lot of people off the hook. White people who don’t have Southern accents and who are therefore “normal” and “intelligent” are not indicted, and can breathe a sigh of relief. It’s disappointing that Gamboa relinquished the opportunity to make a thoughtful commentary, opting instead for sucker punches.

I’ll concede that Gamboa’s work did irritate me and make me feel uncomfortable. We should never expect art to comfort us, confirm previously-held viewpoints, or protect our feelings from harm. If nothing else, Gamboa hammers away at the misguided idea of a “safe space,” furiously demanding that he be allowed to speak and be heard. If someone gets their feelings hurt, well, that’s life.

In contrast to Gamboa’s work is Roberto Martinez’s “First Generation Project,” a heart-rending piece about fathers and sons; family ties; ambition and loss. In this video, Martinez shifts the power dynamic as he sits down with his father in front of a video camera to teach him how to write numbers in English. As they work, we hear the voices of some of Martinez’s family members describing the divide between those who came to the U.S., and their children who were raised here.

But it isn’t until we hear the voice of Martinez’s uncle that the work takes on an emotional heaviness. In describing leaving his home in Mexico to come to the U.S. for work, Martinez’s uncle catalogues the emotional hardship that he never expected to endure, which still weighs on him decades later.

It seems almost cruel to put a parent in front of a camera and to expose their fears and insecurities all to see: as we watch Martinez’s father struggle with the English lesson, the stress and frustration is palpable, and difficult to look at. Even so, Martinez’s work deftly illustrates the gulf that can separate immigrant parents from their own children — an enduring sense of loss keenly felt by those who left home in order to have a better life.

As Martinez’s uncle puts it in the video, “We come here, and we work so hard, and we gain so much while losing so much.”

Amanda Gutierrez’s video “Enthropic Landscapes” approaches similar subject matter with emptiness and quiet. Her video evokes a mood of separation from home and culture, and a persistent feeling of loss. We hear no voices, but can read the words of people who immigrated to the United States. The train tracks that people used to make their way from Mexico City to Chicago link these two cities with invisible threads that, sadly, lead back to emptiness. Indeed, as one caption reads, “We built a big house in Mexico but nobody lives there, it is empty.”

The most powerful piece in the show is one that, at first, seems impenetrable. Darius Thomas’ “#FAhashtag” begins with what can only be quotes from social media, in which users talk down to African Americans en masse in the most paternalistic terms possible.

One user rants, “THIS IS what makes you Guys ghetto! White people don’t do this, nor do any other races! You guys are getting yourselves killed! THE POLICE AREN’T DOING THIS. YOURE DOING THIS TO YOURSELVES!  #DONT STEAL DONT GET KILLED #POLICE PROTECT #Chimp out”

The video goes on to pan across what seems to be a young boy’s room. The Chicago White Sox poster suggests the room belongs to a south-sider. In the center of the dresser is a vase. Later in the video, the vase will seem like a funeral urn; the same bedroom is shown, but in a deep blue-blackness, as if one were trying to navigate the space in the dead of night.

Thomas’ video goes on to become an extended nightmare. Long stretches of black screen are interrupted by a silhouetted person who sits before multiple snow-screened televisions. Voices cry out, listing hashtags meant to memorialize well-known African Americans who died at the hands of police: #AmadouDiallo, #TrayvonMartin, #EricGarner, #SandraBland. There are so many names, in fact, that it becomes impossible to remember them all.

Thomas’ anger is focussed and sharp; despairing, but not hopeless. It’s a powerful work that deserves to be seen. 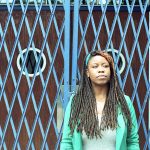 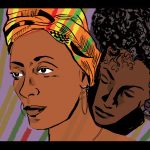