A look at the magic of Gene Siskel Film Center, with projectionist Lillian Hardester. 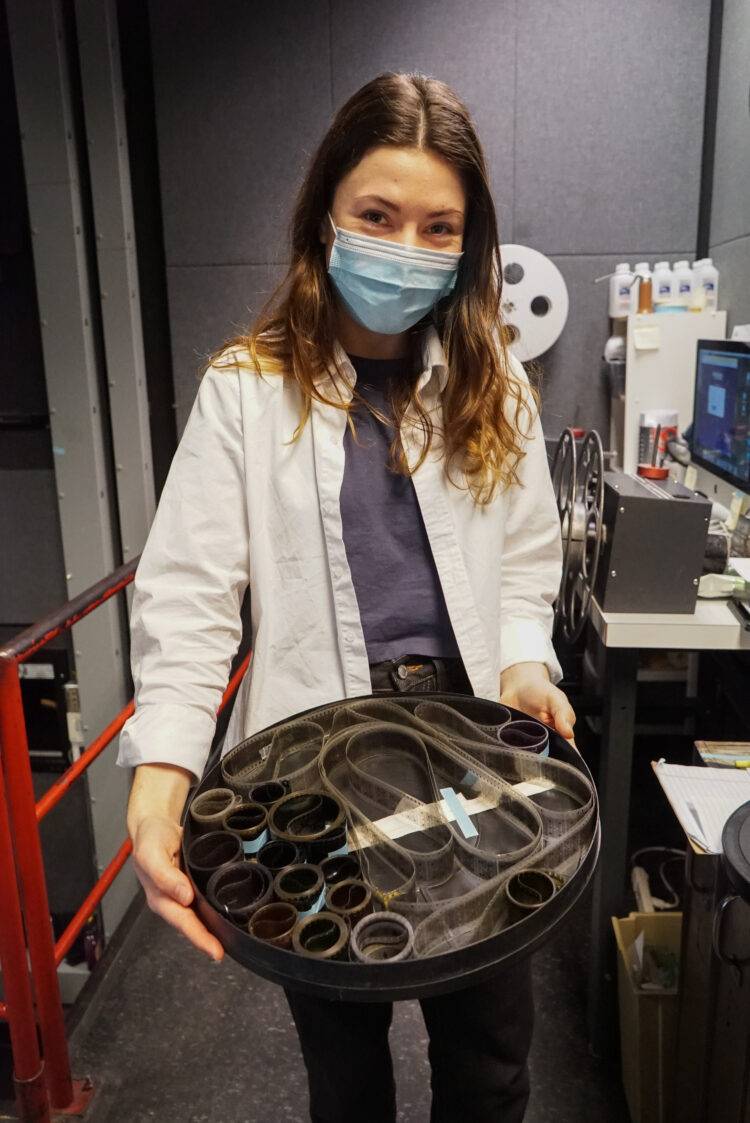 If you’re a student/faculty or simply a film lover, the Gene Siskel Film Center wouldn’t sound unfamiliar. The art house cinema operated under our school sits on the Loop’s theater district, right next to the 162 student dorms, and has remained a popular spot among cinephiles since it first relocated to State Street 22 years ago. Stepping into its 50th year of service, the Film Center has averaged 1600 screenings in its two theaters every year. Going to a movie is always a magical experience, but what really goes on behind you as you lie back comfortably in your cushioned chair, sip on your soda and relish your butter popcorn (pre-COVID) in the dark space? Today, we find out with Lillian Hardester, a projectionist at the Film Center. 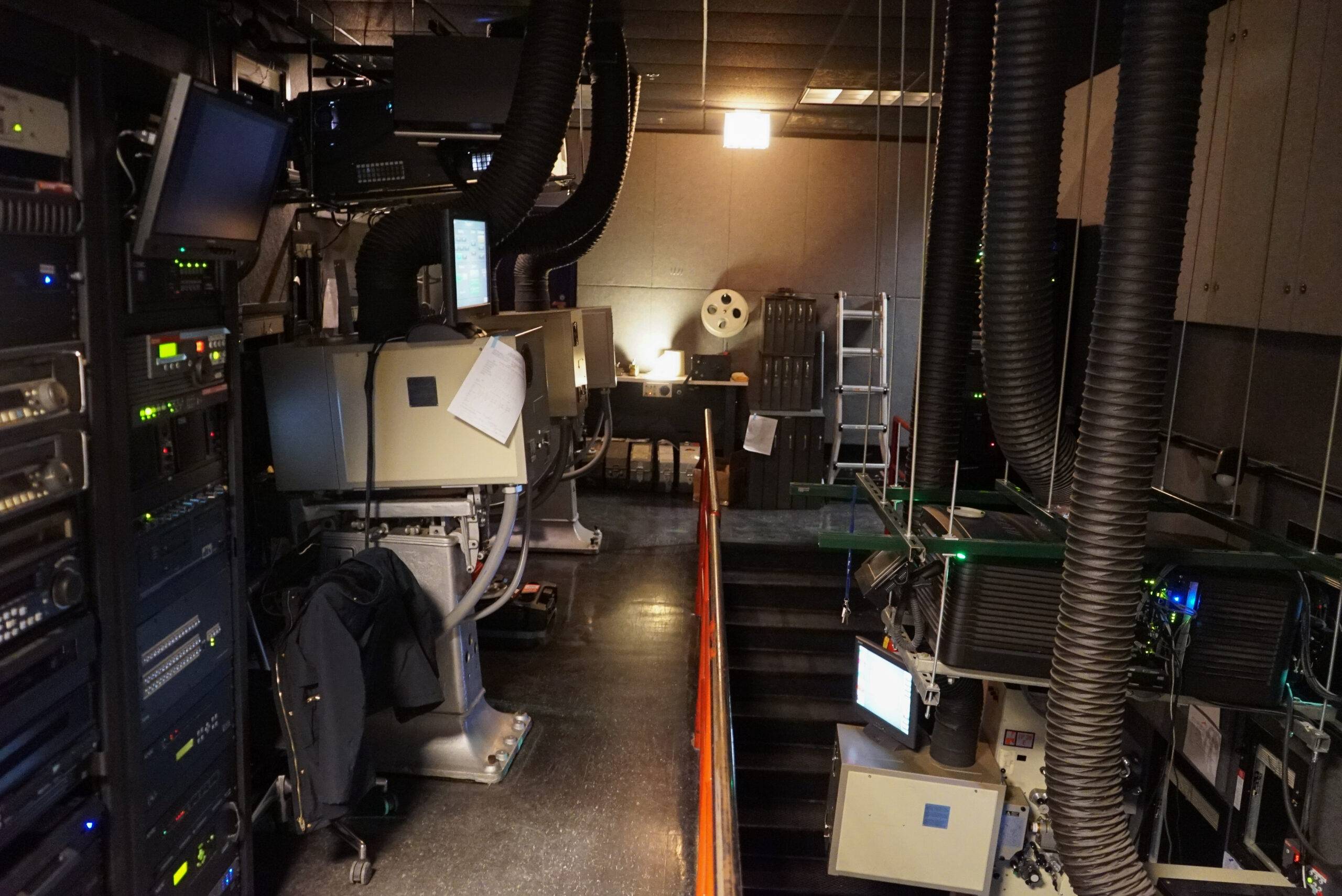 The projection room is divided into two sides for the two theaters. The left side looks out to Theater One and the right (down the stairs) Theater Two. 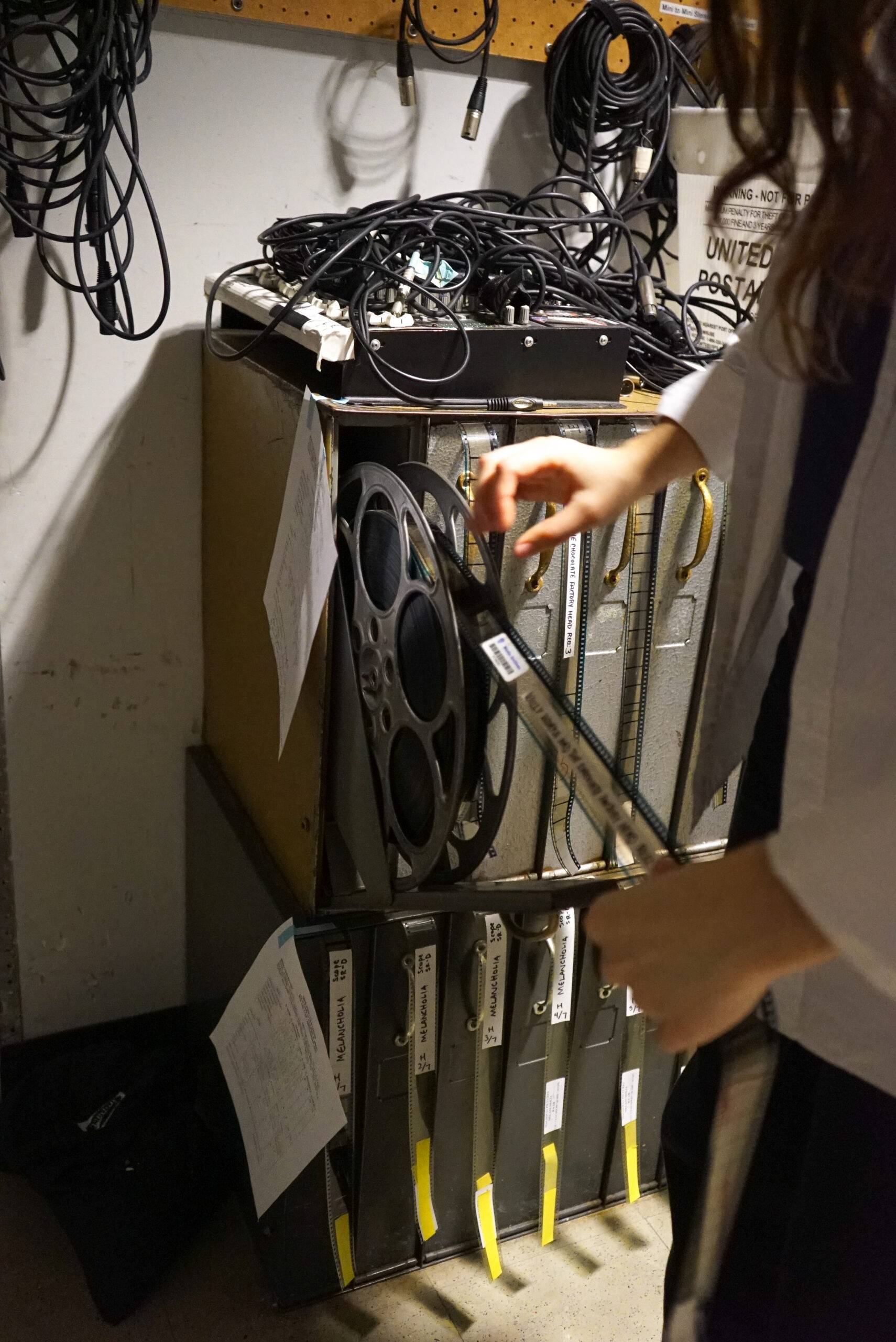 35mm films arrive from a distribution company and are stored in bins by number order. Each bin houses a reel of film that will account for around 20 minutes. Generally, a film runs for 1-2 hours, thus 5-6 reels are expected. 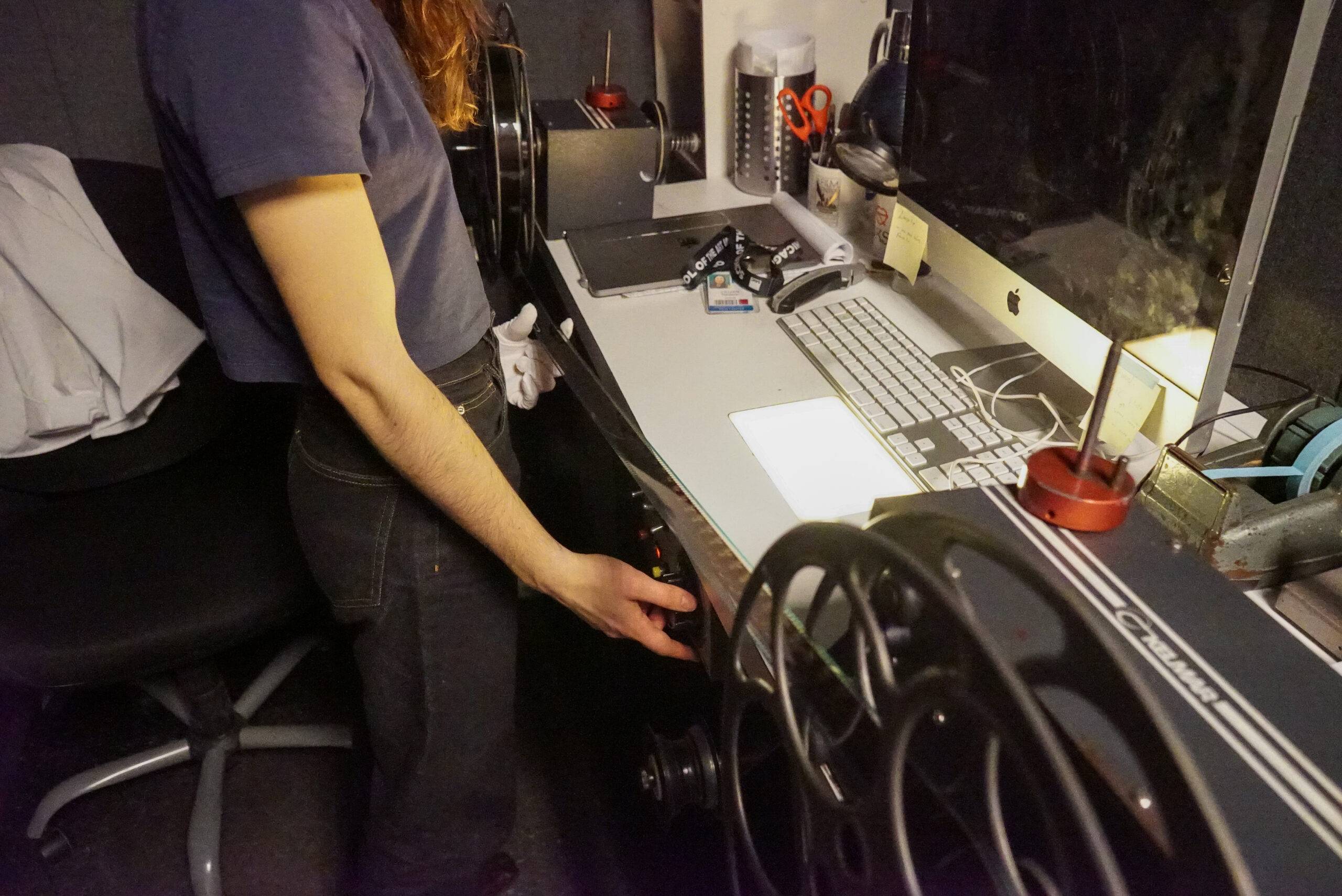 All 35mm films undergo inspection prior to the official screening. This is done by running them on the reels of a rewind bench. 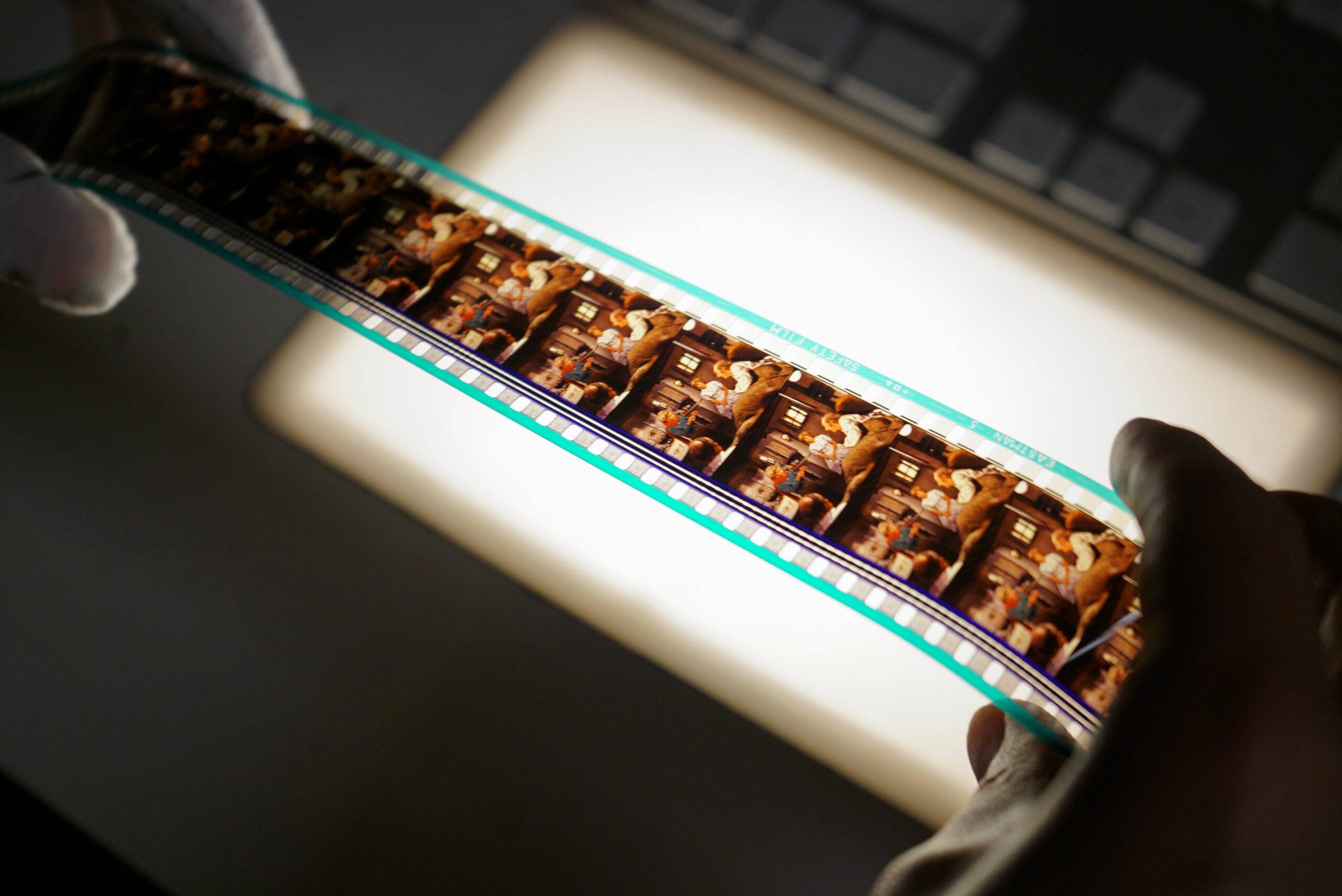 The film will be inspected carefully for any damage or wear that may have come with age and handling. Depending on the print, when coming across patches of damage, Lillian will sometimes use a tape splicer to repair edge or perforation damage. 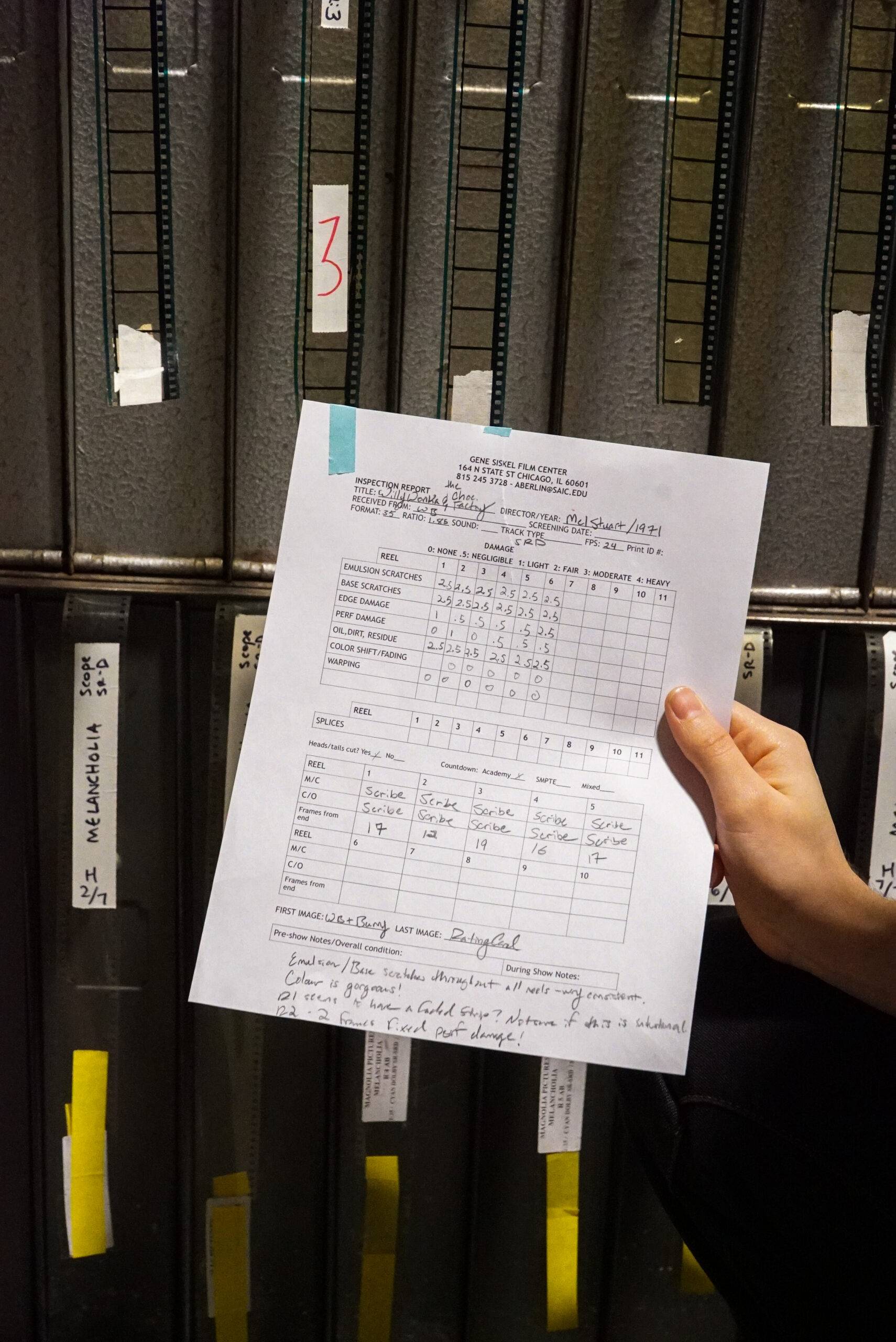 Any discovery of damages will be noted on the inspection report. 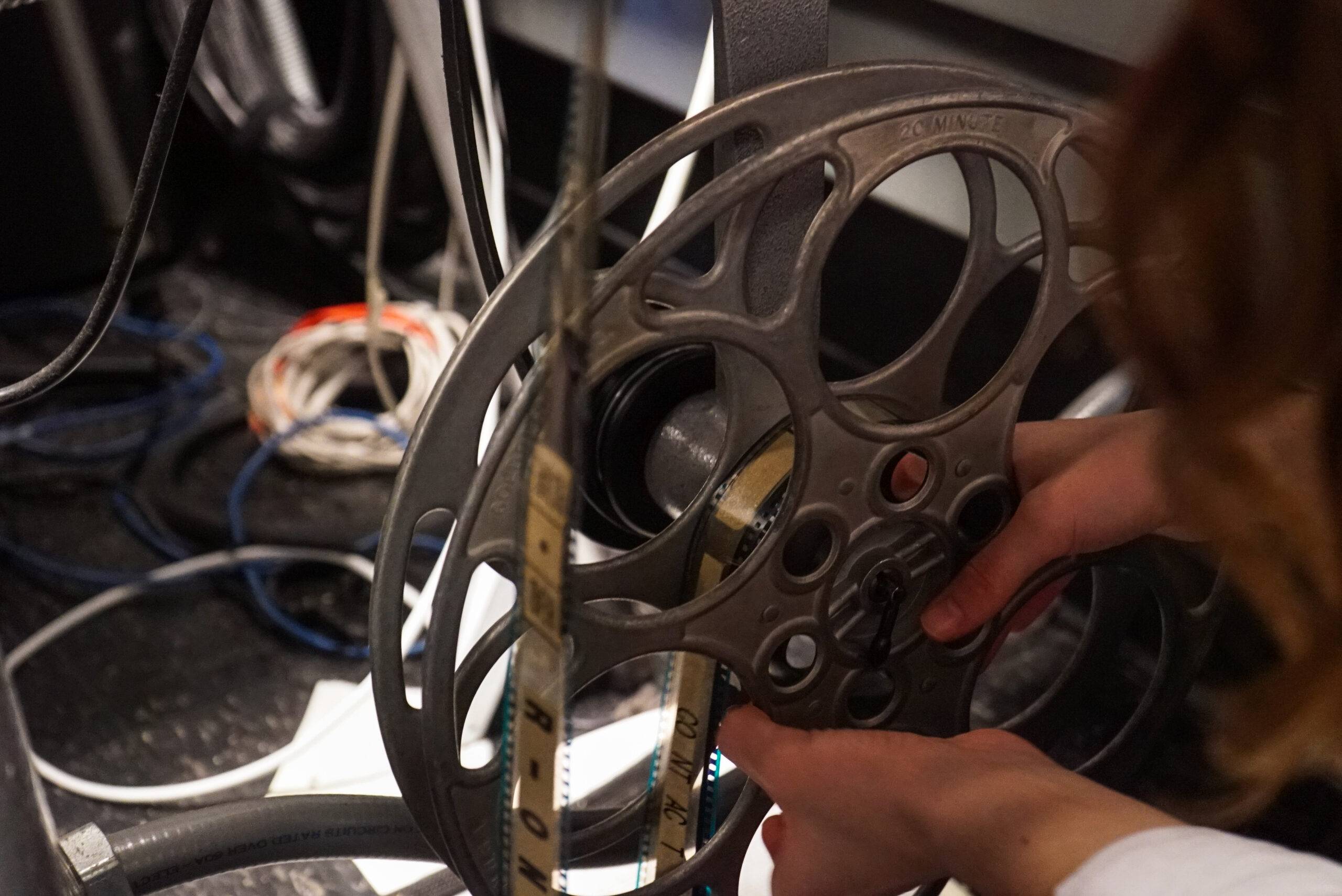 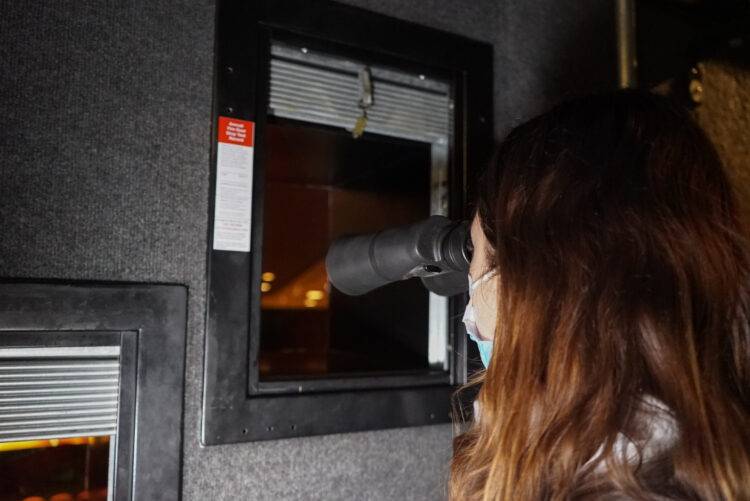 Once the film is projected onto the theater screen, Lillian looks out with binoculars to ensure that everything is in focus and adjusts the focus knob accordingly. 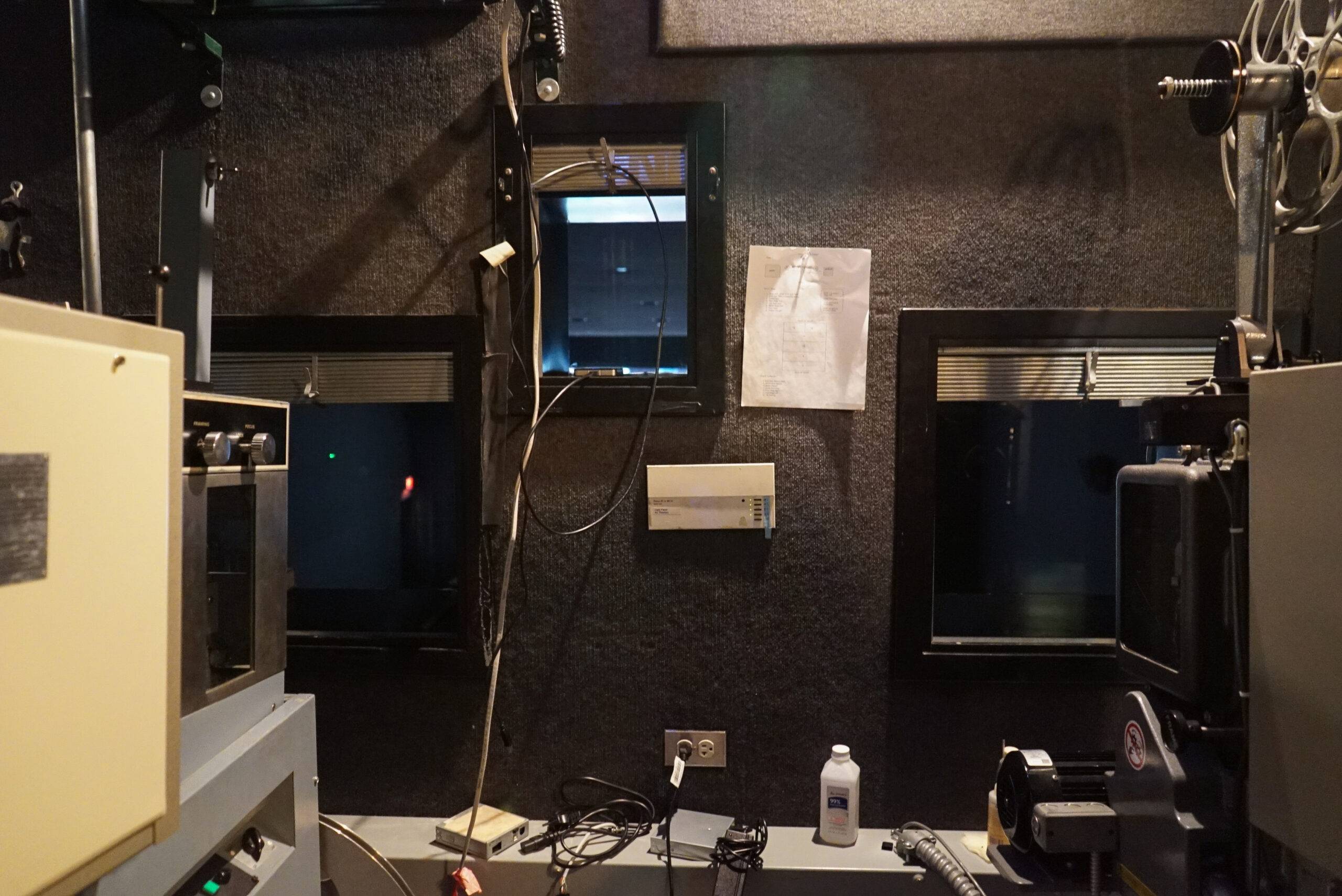 When screening 35mm films, the Gene Siskel Film Center uses the “changeover method” which requires two projectors. As a reel is approaching its end on the first projector, the next reel will be ready on the second one. The projectionist looks out for a cue (a small circle that flashes for 1 second) on the screen which indicates that the second projector can start rolling, thus creating a seamless transition. This process repeats back and forth between the two projectors until the last reel. As opposed to the platter system, where films are stacked and spliced together, the changeover method can prevent unnecessary damage to the films. 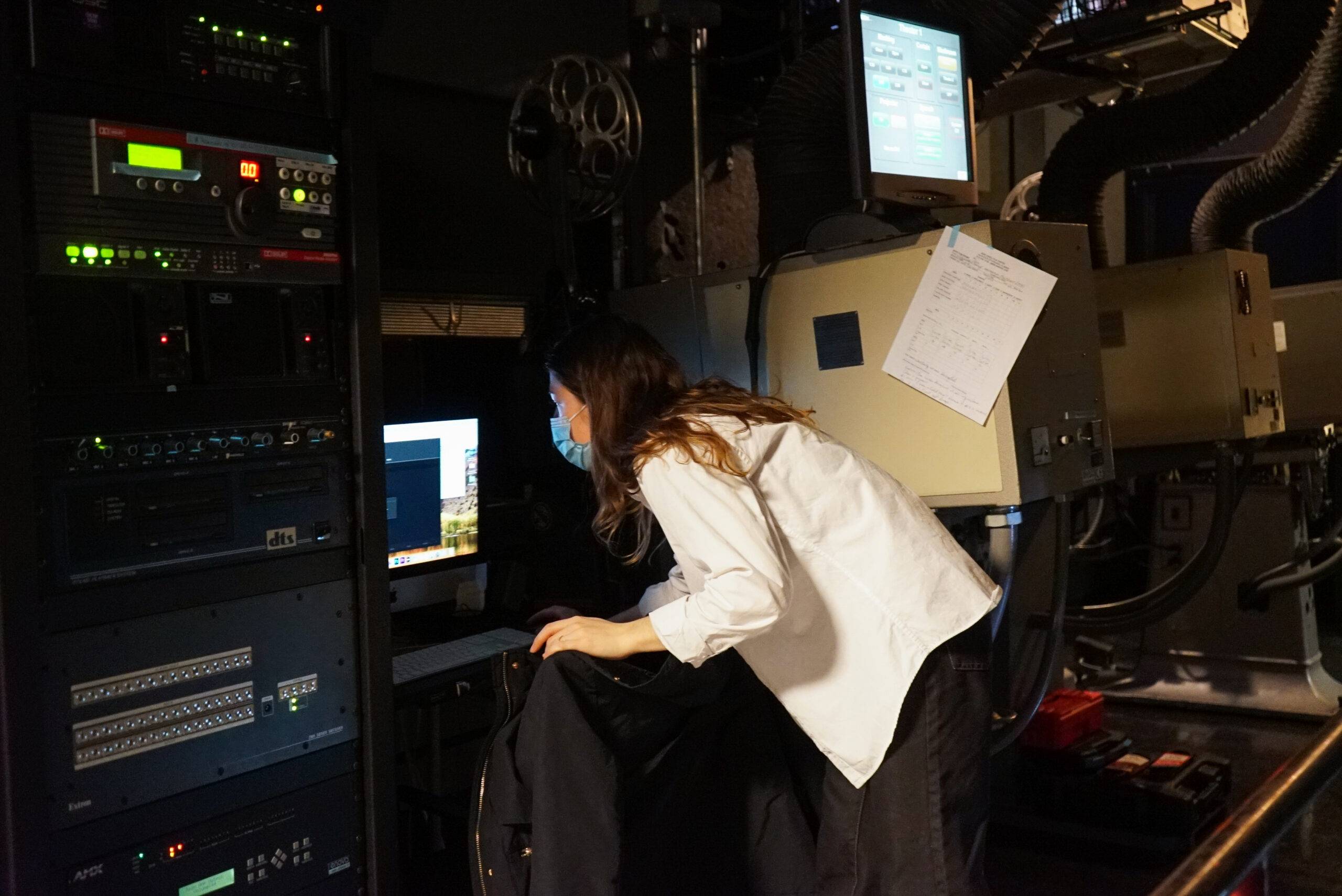 “Compared to projecting 35mm films, screening digital movies requires less physical labor,” Lillian said. “A DCP (digital cinema package) is a container of files for a single entity i.e. trailers, advertisements, countdowns, and features, etc. A playlist is built for each show. While projectionists do make DCPs themselves, many are provided by distribution companies and are readily available for download via the server, hard drive, CRU drive, or online.” 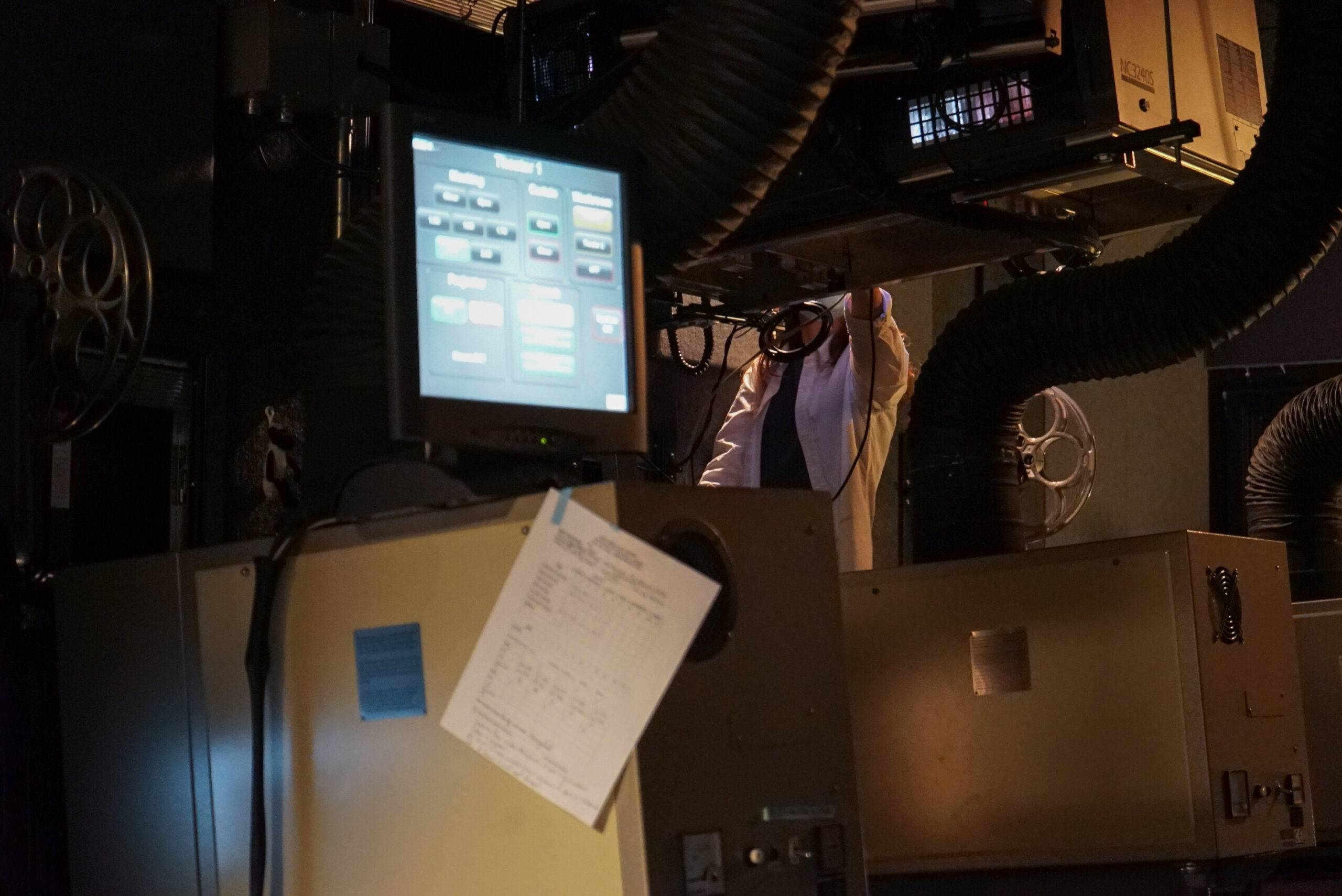 Lamps and exhaust fans have to be turned on before digital projectors begin to operate. 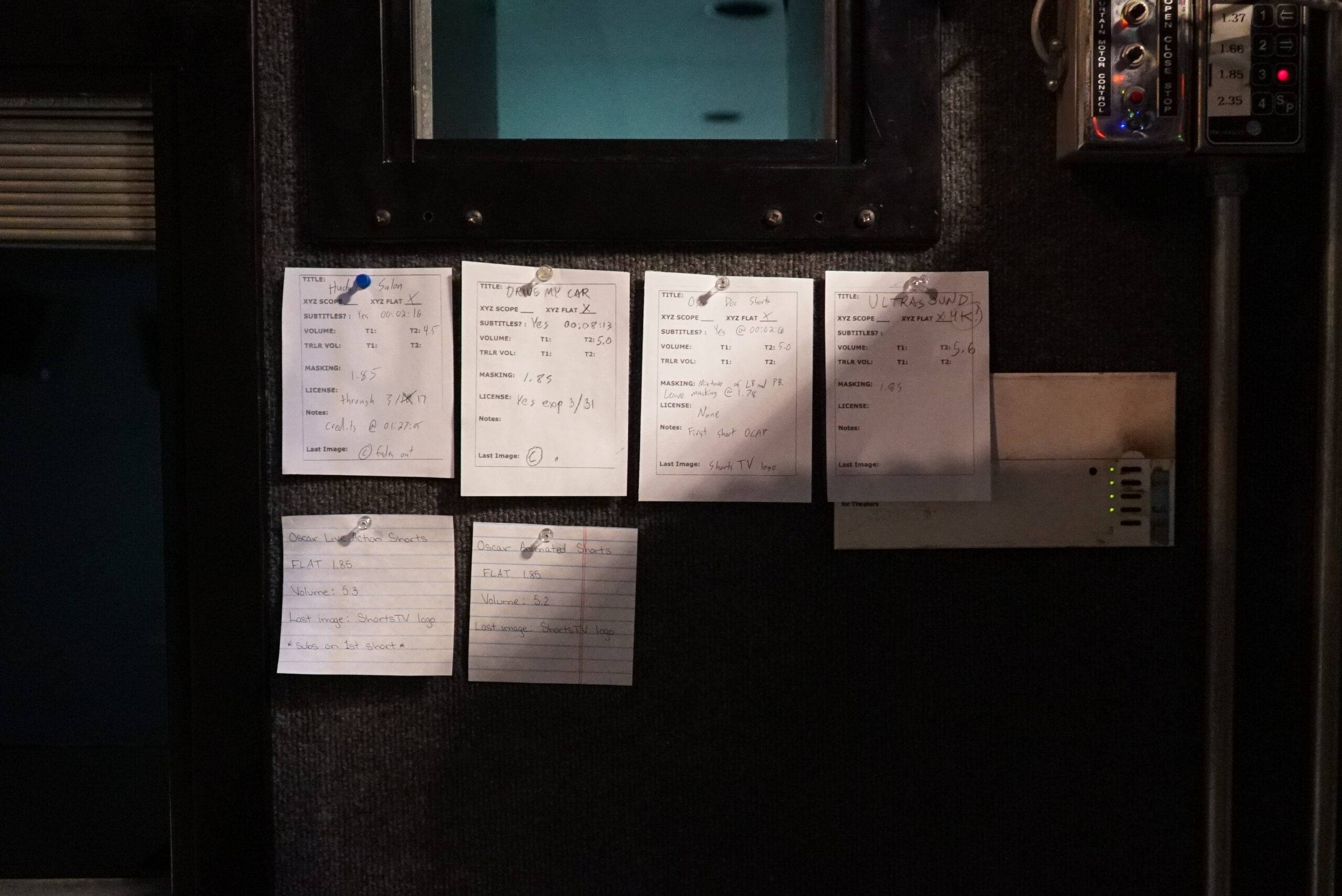 The projection team keeps note of the technical requirements for each film that they can refer to at screenings (e.g. what time subtitles, if applicable, are expected to show up). It is also important to select the right aspect ratio, resolution and masking. 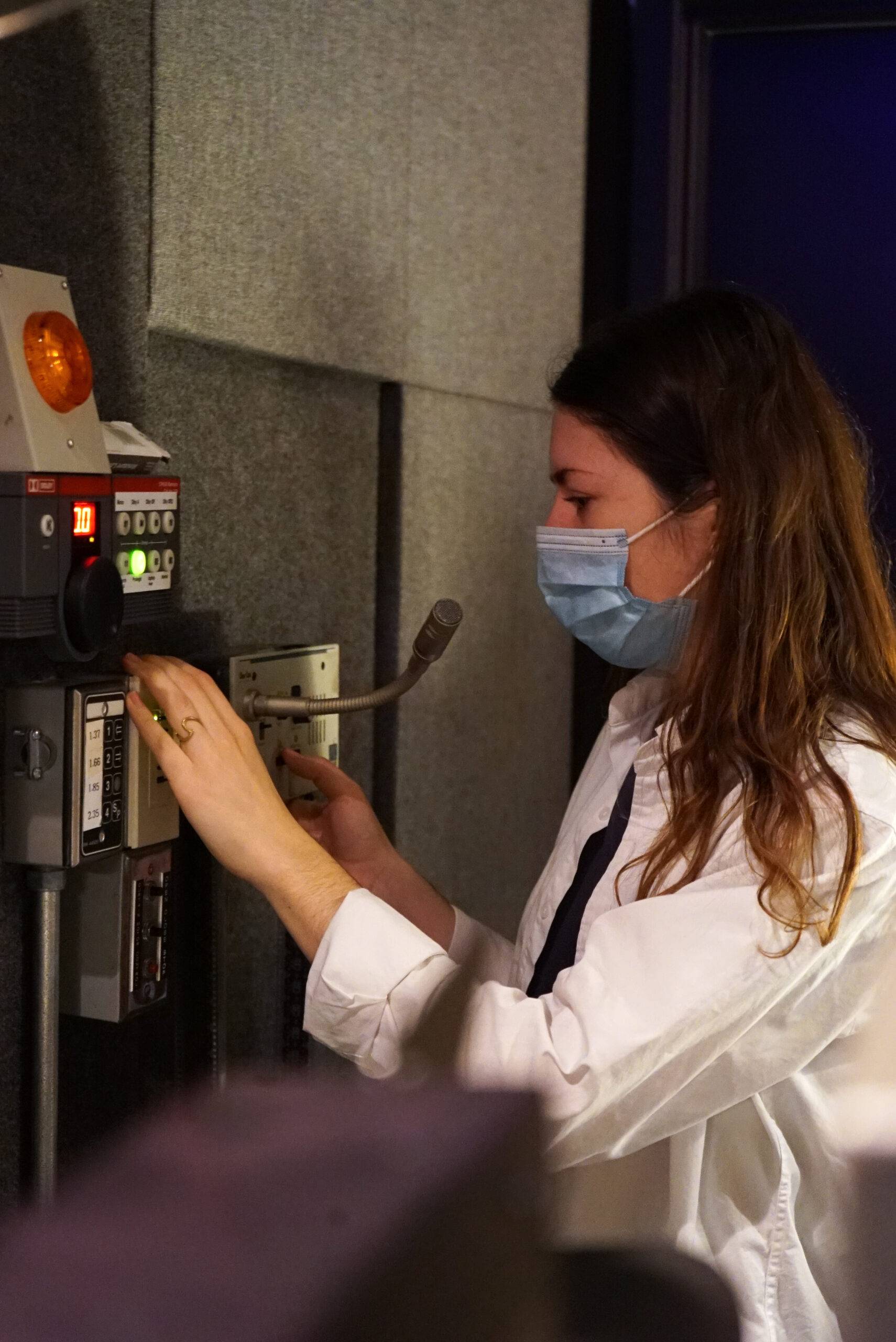 When a film is ready to screen, Lillian notifies the box office downstairs through the microphone that the audience may enter the theater. 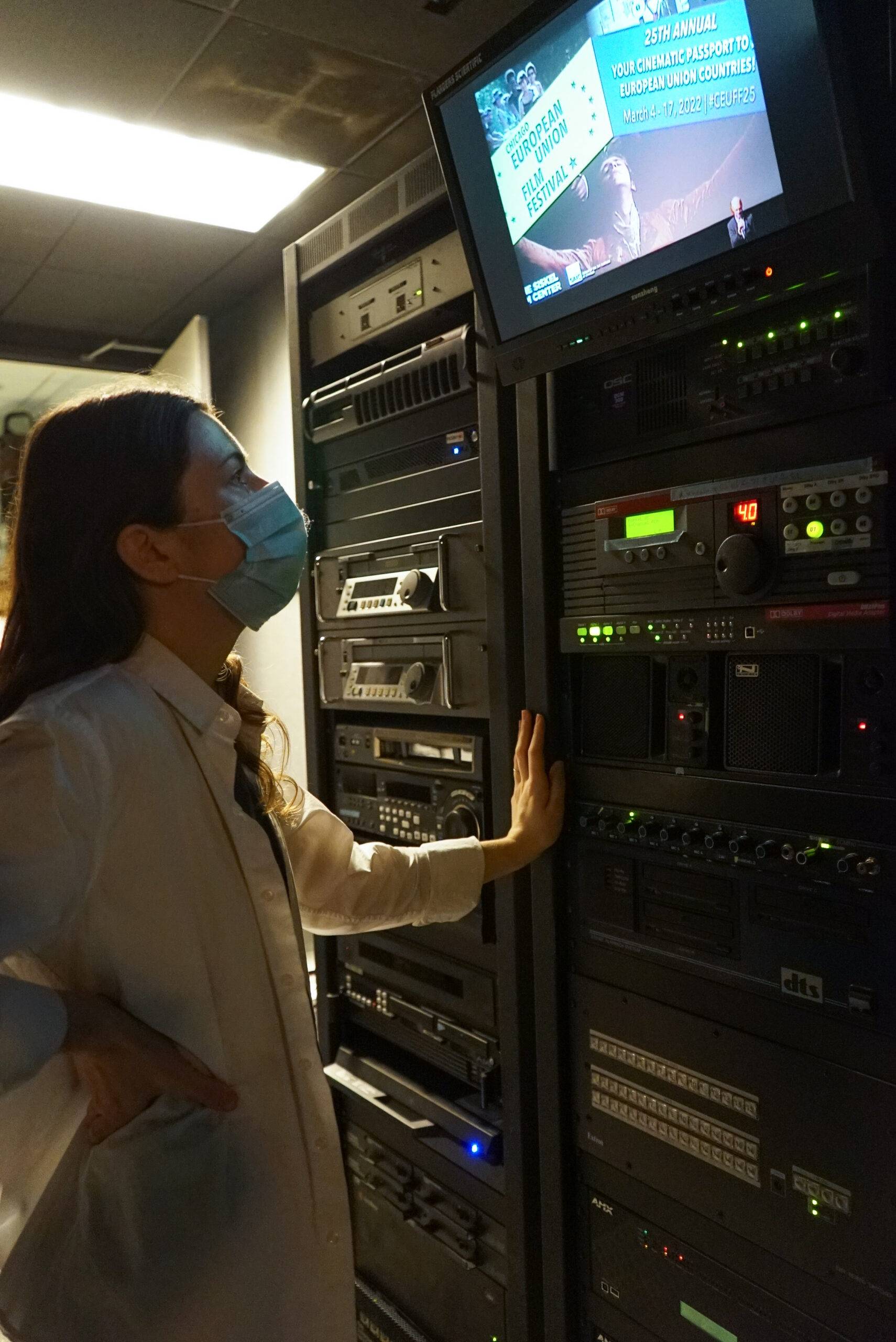 Sometimes, screenings are preceded by guest speeches. Lillian monitors the conversation to ensure she plays the film in a timely manner. 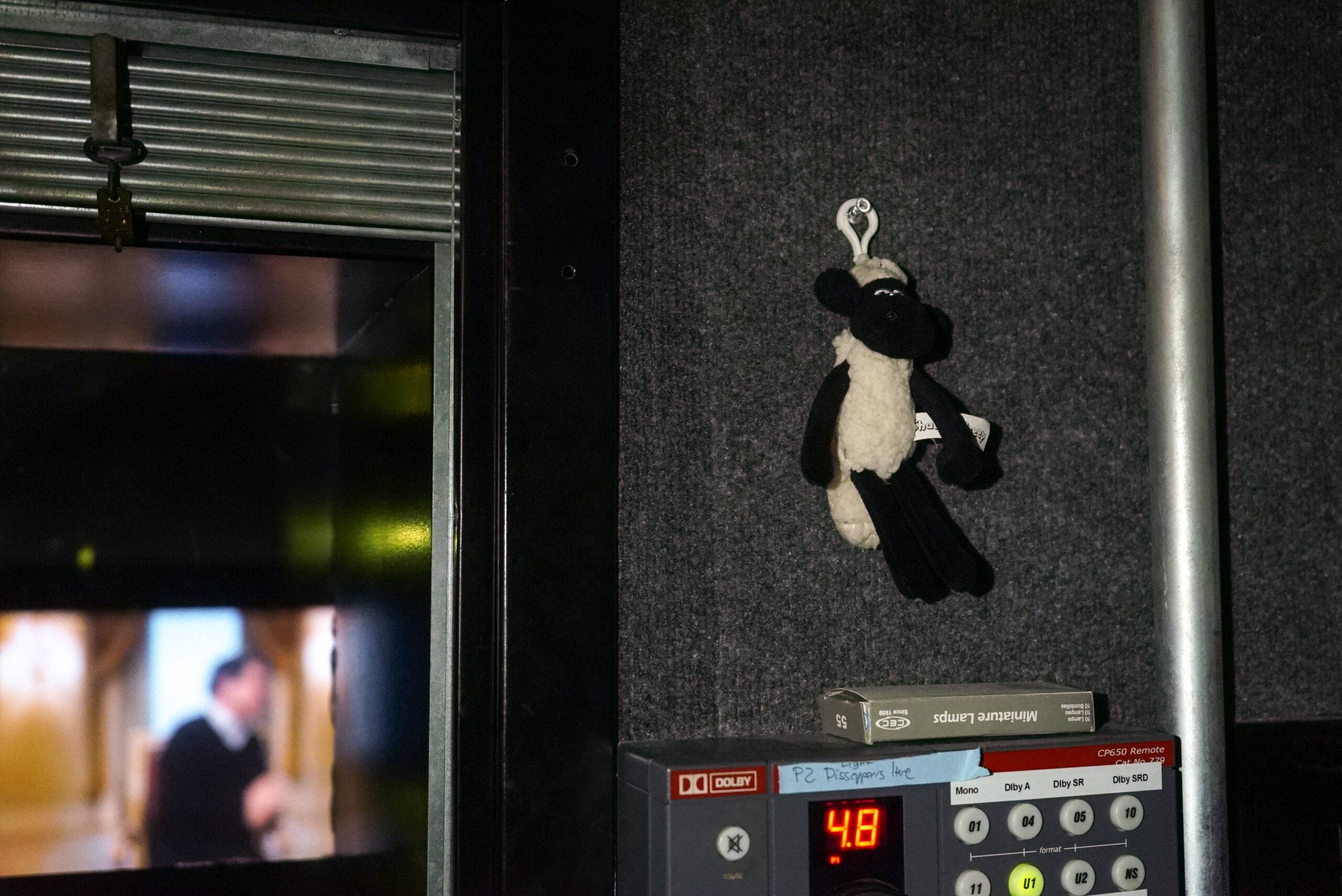 Lillian likes to keep Shaun the Sheep next to the film projectors for good luck. 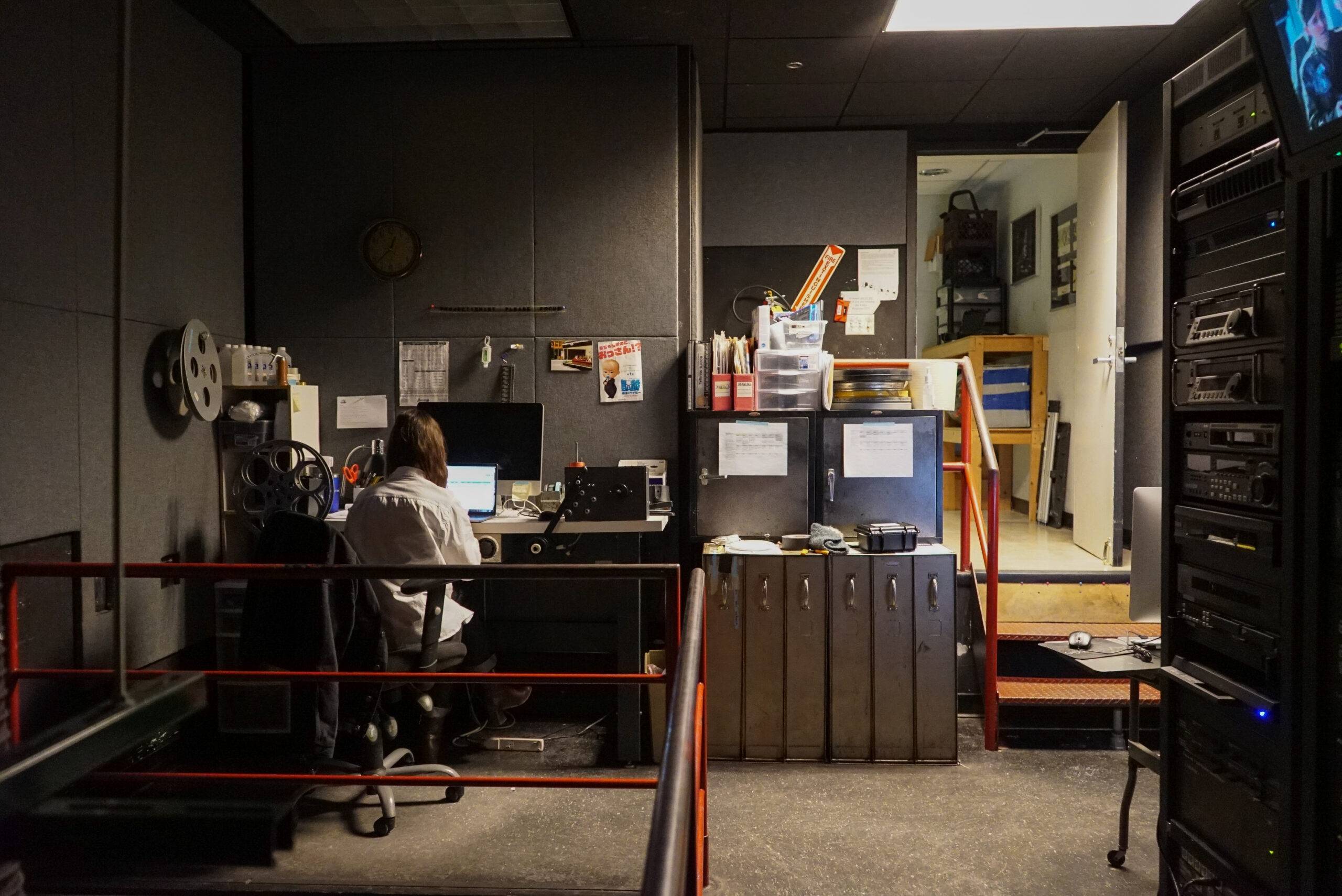 When not projecting a film, Lillian works at her desk. Like many other jobs, she spends a great deal of time replying to work emails to troubleshoot matters with her coworkers. 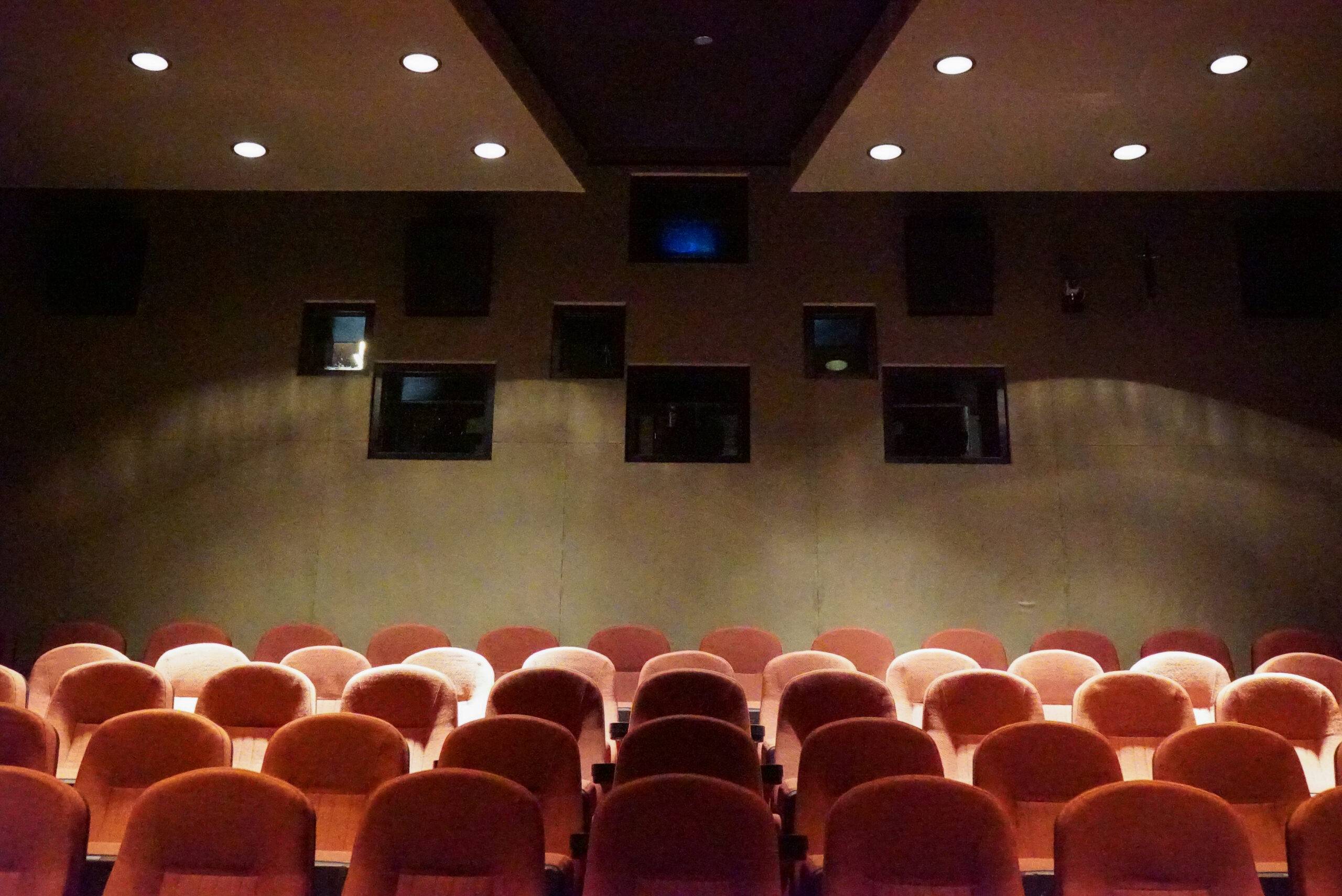 And that is what goes on behind the chairs you sit so comfortably in. Next time you hop by the Gene Siskel Film Center for a relaxing movie night, try to spot and say hi to Lilian or her team through one of the windows behind you!

Natia Ser: What led you to work at the Gene Siskel Film Center?

Lillian Hardester: I studied Film Production at UCA (University of the Creative Arts), in a little town called ‘Farnham’, about 45 minutes outside of London. During my time at university I was able to get my hands on different formats of film and although projecting hadn’t crossed my mind as much, my attachment to machinery started very young. I grew up around people and things that were a lot older than me. At my Nana’s house, I was obsessed with this beautiful red rotary phone in the basement, but when we installed a new system upstairs, the rotary was rendered obsolete, and she cut the line with scissors. Not to be dramatic, but it felt like murder. I was so distraught that from then on, every time we’d get a call, I would race downstairs to answer it from the dead phone because I’m totally and completely normal.

Flash forward a couple years and I’m counting my lucky stars that our old tech director at Gene decided to give me a chance when I heard they had a gig going. I’m very privileged–it’s a great place to work. There’s just loads of history and I’m grateful to learn so much, daily, from people who are not only wonderful but far more knowledgeable than I. My colleagues and I often talk about how we’re earning another film education just by physically handling and watching films that are materially different and from various time periods, countries, etc…

NS: Can you describe your daily duties?

LH: No two days look the same, but I’ll start by prepping for whatever shows and events we have that day and liaise with anyone I need to. If I’m running film: I’ll clean the machines, swap out the lenses, and run some loops (loops are quite literally loops of film that help you to previsualize a show) before running a reel or two of the feature. If we’re running digital formats, I’ll quality check the shows via the server and check in on anything that might need building, ingesting, or inspecting. I do spend a considerable amount of time inspecting film prints–one of my favorite parts of the job! When celluloid moves on the bench, it looks like Saturn’s rings…

NS: What is the most challenging thing about your job?

LH: There are many challenges that I try to embrace as working in a booth with loads of equipment (that can sometimes be a bit temperamental) is something to practice grace, patience and a good sense of humor with. I will say that, as part of the job, we have to quality check films from start to finish which means that we’ll often see the ending before watching the movie and if there’s a film you really want to see yourself, it’s terrible. Haha It’s like reading the last page of a book!

NS: What is the best/most fascinating thing about your job?

LH: Something I was thinking about recently is how, say, a doctor or dentist will want to work with the most up-to-date information and tools to provide top quality service for patrons, whereas on any given day I’ll work with equipment that spans a hundred years–and while I am, of course, partial to running film; it is all beautiful. I love that. And I love knowing that every time I go to work I get to step outside of my own story for a bit and be completely consumed by another’s while helping to facilitate that experience for an audience. It’s like being both the daydreamer and the lullaby…

NS: What is something about your job that might surprise other people?

LH: How difficult it can be for projectionists to actually see or remember half of the movies we screen! Haha. Although, somehow I always end up back in the audience with popcorn for dinner…

NS: What is your most memorable incident at the Gene Siskel Film Center?

LH: I met the glorious and super cool Joie Lee after we screened Crooklyn on 35mm. Someone snapped a photo of it and I’m beaming like a mad woman. I’ll never forget that. Oh! I also didn’t realize that the director of So Late So Soon was the same person filming the Q&A in the theatre for its premiere, and when I assisted him that day and he kept saying things like “I flew in from New York to film this” and “I’m so nervous” and  “I just hope people like the film”, I responded with “Wow, that’s some effort” and “Oh, nothing to worry about I’ve filmed in here a million times it’ll be great” and “Wow, that’s very generous of you…” Daniel, if you’re reading this; I’m so sorry. Haha.

LH: Not too long ago we screened Pedro Almodovar’s Talk To Her on 35mm, and there’s a scene in which Caetano Veloso sings ‘Cucurrucucú paloma’ and it’s just stunning. But my favorite film? This is so tough! I can’t choose. I’m so sorry. I love everything! I love and need Shrek just as much as I need Taste of Cherry, The Dark Knight, 35 Shots of Rum, After Life (1998)… There’s this movie I was obsessed with (for whatever reason) as a child called Snow Dogs and it features Cuba Gooding Jr. as a dentist in Miami who winds up competing in an Alaskan dog sledding race. I swear to god this is a real film and it was shot on 35mm. One day I will find and own Snow Dogs.

NS: What is the last movie that made you cry?

LH: The Worst Person in the World made me weep for a lot of reasons, but I cry at a good meal. The music is great. The performances are stellar. I got off my shift that night and took a vacant seat towards the back. A man a couple rows down from me had set up camp with, like, ten takeout boxes and went to town on some orange chicken while I just sat there, tears streaming down my face and secretly hoping he’d give me the fortune cookie.

Natia Ser (BFA 2023) is a crazy cat lady who takes photos, writes and bakes. She snoozed her alarm 9 times this morning. @arkaaive
Like 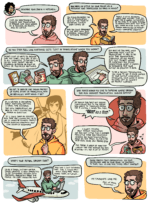