Alison Ruttan’s recent exhibit in all three of the Michigan Galleries at the Chicago Cultural Center asks us to take a look at ourselves as humans. Are aggression and violence genetically ingrained into our human-ness? What does our ability to wage war say about us as humans?

Images courtesy of The City of Chicago

Alison Ruttan’s recent exhibit in all three of the Michigan Galleries at the Chicago Cultural Center asks us to take a look at ourselves as humans. While many might say, “Well, it’s obvious that we are human,” not many take the time to think about what qualities constitute us as thinking beings and whether the traits of aggression and violence have something to say about our humanness. These qualities of violence and aggression are exactly what Ruttan is after.

The exhibit includes one gallery of previous work entitled, The Four Year War at Gombe, while the remaining two galleries are filled with works that Ruttan created specifically for the space. The Four Year War at Gombe is a video, and photo-based work that is loosely based on Jane Goodall’s observations of chimpanzees. During Goodall’s extended stay at Gombe Stream National Park in Tanzania, she learned that chimpanzees are fully capable of waging war against one another, long term planning, and strategic thinking. This particular group of chimpanzees had lived in peace together for many years when, suddenly, the group split into two factions and one group began to systematically murder their former allies. What took place was reminiscent of the many human civil wars that tear apart families around the world. 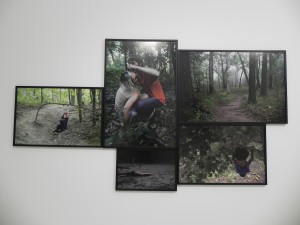 Ruttan’s photographs show humans acting in place of the chimpanzees. The photos are grouped together in order to capture certain moments during the bloody civil war and murders that took place as Goodall observed these animals. The photo groups start out humorous, with one person/monkey smelling another’s butt while another woman/monkey scratches the other’s armpit. Quickly, the photo groups escalate to become darker, scarier, and more haunting than one could anticipate images of humans acting like chimpanzees to be. While the other two galleries include interesting new work, this gallery remains the most engaging and moving of the three in terms of a direct comparison of human brutality to that of animals. While prompting questions about our role as human, The Four Year War at Gombe reminds us that we are also animals.

The first gallery space shows an installation entitled, A Bad Idea Seems Good Again. Unlike her earlier work, here Ruttan is dealing strictly with humans and the much darker theme of violence against civilians during the Israeli bombardment of Beirut in 2006. She has created very simple, international style buildings out of ceramic, which she then destroyed to mimic photos of the bombing that she found online. The tables on which her works are placed is an interesting and beautiful choice. They create a sort of ghost landscape with buildings located at different levels due to the structure of the tables. Though the ceramic buildings are thought-provoking in themselves, the spacing of the works around the room creates a perceived sense of desolation and loneliness that add drama to the installation. 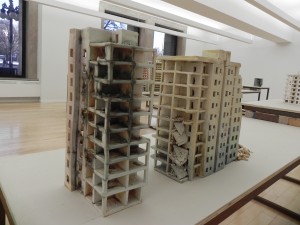 The third and final gallery space is filled with a work entitled, Line in the Sand. Here, the artist crafted ceramic automobiles in a deliberately “bad” way by including tears and breaks wherever possible. Quite literally, she is depicting a miniature version of what it might have looked like from the sky when U.S. military bombed retreating soldiers and civilians leaving Kuwait in 1991. Depicting what happened on this “Highway of Death” in an artwork is an extreme task to take on. The cars created for the piece drew the attention of many children who felt invited to play with the sandbox. The security guard on duty seemed about ready to jump on the next person who tried to touch it. The fact that many parts of the work are so small contributed to the feeling of humans as tiny and insignificant in the wake of power and aggression. At the same time, the work is large in that it takes up an entire gallery. The paradox of depicting an event that happened rather quickly using a method that appears to have taken a considerable amount of time is also evident. 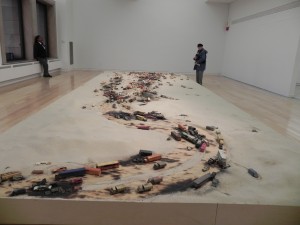 Ruttan’s three installations shown together create an interesting moment for self-reflection for the gallery visitor. As it states on the introductory wall text, chimpanzees have 98% of the same genes that we as humans do. Through The Four Year War at Gombe, we can assert that these genes enable both humans and chimpanzees to commit heinous acts of violence against their own kind. This begs the question, are violence, hate and aggression biological attributes that are born into us or do they develop after birth? Are they part of what makes us human? If your answer is a resounding NO then it might be worthwhile to contemplate these shells of objects (the destroyed buildings and cars) left behind by human destruction. Where is the humanity in all of this? Humanity is absent in those paradoxically human centric artworks and one is left to wonder, is there any hope of finding it at all?

The exhibit was on view until May 10, 2015.
Alison Ruttan is an Associate Professor of Contemporary Practices and Arts Administration and Policy at the School of the Art Institute of Chicago.

Arts & Culture Alison Ruttan: Where is the Humanity?
« Previous Story 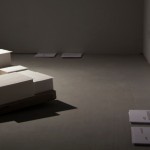 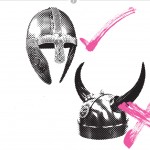