A review of Sanaz Sohrabi’s most recent show, Spatial Agreements. It is the first solo exhibition by the artist, a resident in the Chicago Artists Coalition’s BOLT program.

The Austere Poeticism of Disruption

Photos Courtesy of the Artist

Spatial Agreements explores humanity’s various forms of coordination and the compromises in which it engages; the concessions made in pursuit of concord, the give-and-take between fact and fiction, thought and action, space and time. It is the first solo exhibition by artist Sanaz Sohrabi, a resident in the Chicago Artists Coalition’s BOLT program.

The way we are programmed for pattern recognition, like seeing a face on the moon’s surface, influences how we interpret and interact with our surroundings, forging an agreement between the space of the mind and the spaces beyond. This constructed solace is something Sohrabi elegantly disrupts with the two works comprising Spatial Agreements.

Uncommon Grounds is a mixed media installation of paper and cement accompanied by text. It consists of six stacks of take-away leaflets and a structure meant to resemble the former Iranian Embassy in Washington D.C. Built in 1959, the embassy’s architecture bears the influence of modernism with the addition of traditional Persian accouterments. To create a likeness, Sohrabi utilized Google Maps and photographs from friends. Due to geographical and temporal distance, portions of the building could not be captured by satellite or camera and are thus translated as flat white paper.

Sohrabi has created a form that represents the defunct role of the Embassy, which was abandoned in 1980 when Iran and the U.S. severed ties. The small paper structure sits on a slab of concrete positioned on an unseen destabilizer., Sitting askew on the concrete floor, it is further disassociated from the responsibilities of an architectural model.  A sort of physical rendition of mental mapping, aided by Internet prosthesis, it also points to the shortcomings of the information revolution and reflects the contingencies of political relationships. The confluence of information does not necessarily result in a positive synthesis, as was seen in the tumultuous relationship between Iran and the US.

Stacks of white paper flank the three walls surrounding the structure. Visitors are invited to pick up the  pages and in doing so I am reminded of the bureaucratic diplomacy the building was intended to serve. The order of leaflets can be rearranged and reread. Part poetry, part memoir, together they invoke a potential reality projected into the paper and cement construction on the floor. The way sound waves reverberate in a seashell invoking the sound of the ocean, the words on these pages coalesce in their new-found environment to be individually interpreted by their beholder.

Disposables, a video installation, occupies a projection screen on the floor providing a luminous extension of the gallery into the visual field of the video. The setting is a vast, window-lined warehouse, the white paint on the walls and ceiling conspicuously peeling. A brightness that is cool and somber as opposed to sunny and warm washes out any view of what lies beyond its windows. In the video, 14 people dressed in muted grays with neutral expressions contribute to this dystopian landscape, which appears both sterile and decrepit. This is not a performance but an installation of bodies, people Sohrabi instructed to hold precarious positions and move in a strained manner. A voice-over relays a narrative reminiscent of past political violence and evocative of post-apocalyptic tropes. Occasionally it syncs up with the visual occurrences, but the bodies’ movements are not intended to be a portrayal of what is being described. They function outside of the narrative, with the camera’s movements contributing to their non-linear mode of existence, rotating, probing, and circling.

The bodies act in resistance to gravity and comfort, countering a body’s usual behavior. Nonetheless, a harmony is created by happenstance. Here, Sohrabi brings to light the ideological potentials of breaking with convention. In its calm telling of a lyrical account of hellish unrest and personal perseverance, Disposables is mirrored by the labored movements of the bodies, which struggle independently but occasionally come together and move as a unit.

Our cognitive bias favors linearity, clarity, and consistency because they facilitate our processing of information. Sohrabi complicates these characteristics in Uncommon Grounds, showing that truth is adaptable; its texts can be reshuffled and reinterpreted as Sohrabi reinterpreted the former Embassy based on accumulated information. The intensity of words and movements in Disposables maintains a sense of tranquility, a juxtaposition that challenges what we make of its auditory and visual language.

The tone of Sohrabi’s works, seen in hints of convoluted bureaucracy and a sense of impending danger, is Kafkaesque, yet Sohrabi creates harmony, not embodied by idyllic scenes of smiling faces, but in solidarity in the face of unpredictability. Her work reminds us both of the pervading presence of turmoil in the world and of the enduring poetry required to aid in its balance. 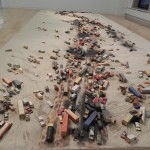